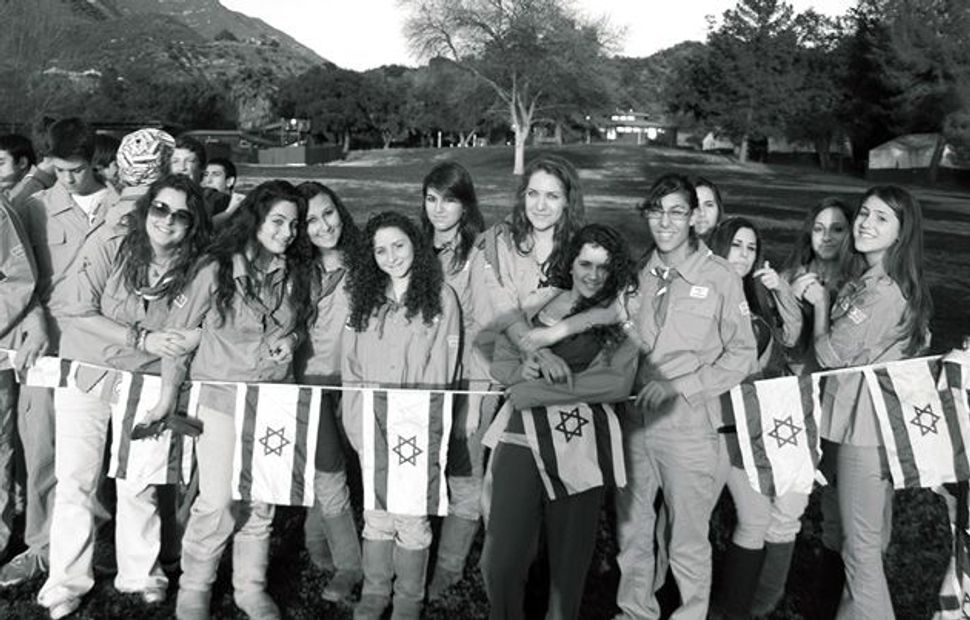 Next Generation: The Israeli Scouts in Los Angeles is popular with the children of immigrants. Image by ThE ISrAELI SCOUTS OF LOS AngELES

The image of Israelis living outside Zion — the yordim, as they are sometimes derogatorily called — has come a long way since the 1970s, when Yitzhak Rabin referred to them as “fallen weaklings.”

To such an extent, in fact, has this stigma faded that a controversial bill proposed in the Knesset in early February would give many of these expats the right to vote in Israeli parliamentary elections even from the comfort of their home cities, be they Los Angeles, New York or Moscow.

Foreign Minister Avigdor Lieberman and his right-wing party, Yisrael Beiteinu, first presented the plan, which was then endorsed by the Likud Party and Prime Minister Benjamin Netanyahu. It would allow anyone who had left Israel in the 10 previous years the right to vote from abroad — a right now reserved for diplomats. In the days since, the proposed bill has become a subject of deep political debate, eliciting passionate opposition and accusation that Lieberman is cynically trying to draw on outsiders to increase support for the right wing or beef up Israel’s Jewish majority.

What’s lost is the opinion of those it would affect most: the expat Israelis themselves. Even as the bill has been watered down to meet the complaints of its opponents, it’s not clear that these Israelis — assumed by many political observers to be right wing and eager to vote — would embrace the opportunity. The debate has, in fact, forced many of them to think about the rights and responsibilities they should have toward a homeland that some of them left long ago.

“I have lived here 28 years, and I don’t think I have the right to vote and influence what is going on over there from being here,” said Eli Fitlovitz, chairman of the Israeli Scouts of Los Angeles, speaking for himself and not in the name of his organization, which oversees programs for 200 children of Israeli expats. “I think it’s a decision completely that should stay within Israel.”

As of February 17, the bill had already been significantly weakened from Lieberman’s initial version. Netanyahu himself said that the discussions were moving toward restrictions that would allow only those Israelis who had left in the previous year the ability to vote from abroad, as opposed to having left 10 years ago.

Opposition to the bill has come, politically, from Shas and Labor, parties in the governing coalition that are categorically opposed to it, and Kadima, which has proposed a more limited version. Several retired generals of the Israel Defense Forces, and the former head of the Shabak, Israel’s internal security service, have publicly come out against the bill. Israeli cultural figures like popular talk show host and writer Yair Lapid have also expressed their strong opposition, with Lapid calling the bill “immoral in the deepest sense of the word” in a recent column.

For all the political fire it has sparked, though, it’s not clear that the population the bill is aimed at is all that large.

Israel’s Ministry of Immigrant Absorption refers to 750,000 Israeli passport holders outside the country. In the United States, says Lilach Lev-Ari, a researcher at the Oranim Academic College of Education and at Bar-Ilan University, there are about 200,000. Of those, she said, only 40% are Israeli born; the rest are second generation or foreign born, mostly in the Soviet Union. And 10% of that 40%, Lev-Ari said, are Israeli Arabs.

“Those actually interested in voting are no more than a few tens of thousands, mainly those born in Israel who immigrated within the past five years,” Lev-Ari said. “I don’t believe all the rest will bother going to the polling stations.”

This assessment was confirmed, anecdotally, by Gal Shore, editor-in-chief of Shavua Israeli Weekly, the largest Hebrew-language Los Angeles newspaper serving the city’s substantial Israeli community. Shore said that an informal poll conducted by his paper found that only 20% of expats would vote if given the chance.

But the lack of real numbers — especially if the bill comes with many restrictions as to who is eligible, as looks likely — did not reduce the emotions that the debate evoked for many Israelis living abroad.

Unlike citizens of other countries that allow absentee voting, such as the United States, for many expat Israelis, the decision to live far away from their birth country is wrapped in ideology. Some struggle with the feeling that they have somehow abandoned Zionism and chosen an easier life. For that reason, in conversations with the Forward, many of these Israelis said they felt ambivalent about being handed this right to vote.

Shoham Nicolet is the executive director of the Israeli Leadership Council, a Los Angeles-based group whose mission is to build a strong Israeli-American community and connect it with the greater American Jewish world. Nicolet himself was an officer in the IDF and left Israel a little less than 10 years ago for university studies in the United States. After he got his Master of Business Administration degree, he decided to stay.

“It is not as if there is a uniform opinion here about this matter,” Nicolet said. “The same advantages and disadvantages that are discussed in Israel are discussed here. For us, the most important thing is that during this debate in Israel, to make sure that they are sensitive to the Israelis abroad, that the conversation doesn’t bring back all the negative connotations.”

Nicolet points out that already some of these old stereotypes are coming back, and even the name that has been used to describe the bill in the Israeli media, “the yordim law,” can be seen as offensive. Yordim is a Hebrew term that comes from the verb “to descend,” the opposite of “aliyah,” meaning “to ascend.”

“This terminology doesn’t have a place in 2010,” Nicolet said. “We can’t reduce it to good people and bad people. The argument is over how much influence these Israelis living abroad should have.”

The advantage of the new voting rights, as Nicolet and others see it, is that it might strengthen the engagement of expat Israelis and make them more aware of the politics of Israel.

Others point to what they see as the obvious political motives behind the bill, which seem far removed from the actual desires of those whose enfranchisement it is seeking.

Udi Sommer, a political science professor at the University at Albany SUNY and the author of the book “Home but Away: The Experience of Israeli Parents in America,” said he thought that most expats are surprised by the idea that they should vote. He pointed out that this initiative was dreamed up by Israeli politicians in the Knesset and not as a result of demands from outside the country.

“For most of these [expat] Israelis, this suggestion, which is clearly motivated by a wish of one sector to increase its political power, is seen as something unusual,” Sommer said. “They did not think of this possibility and never asked for it.”

And some Israelis don’t want to give it to them. “We live in Israel because we chose to withstand all the difficulties it presents us with,” wrote Lapid, whose views are usually seen as representative of a public consensus. “My kid does not travel to school in a yellow school bus, but rather on the No. 5 bus in Tel Aviv, which once exploded before reaching its final destination. We withstand it because we believe in something and are willing to suffer through all the difficulties for it. If someone does not want to, or cannot, withstand it, he has the right not to live here. But he has no right to tell us how to live.”