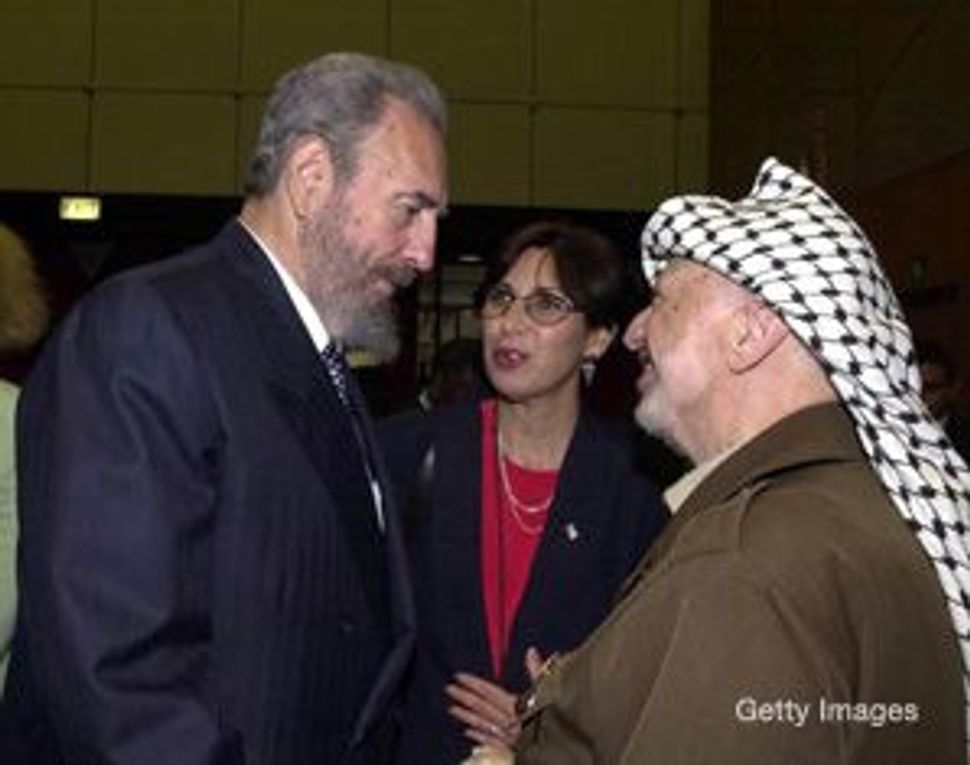 Durban I: The 2001 conference came under fire for providing cover for antisemitic and anti-Israel activity. Above, Cuban leader Fidel Castro confers with late PLO Chairman Yasser Arafat during the conference.

In what could be a major blow to the United Nations, the United States is pulling back its involvement in an upcoming U.N. anti-racism conference due to concern that it would stir up the same anti-Israel sentiments that marked the first such conference, the Forward has learned. 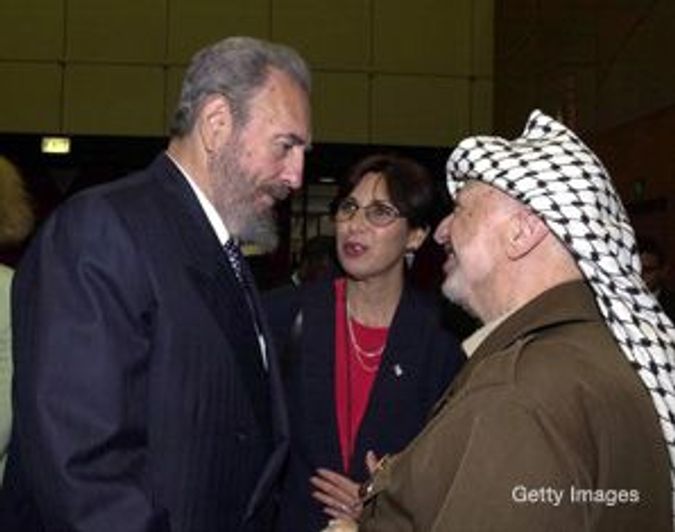 Durban I: The 2001 conference came under fire for providing cover for antisemitic and anti-Israel activity. Above, Cuban leader Fidel Castro confers with late PLO Chairman Yasser Arafat during the conference.

“We are not participating, because we are concerned about the structure and the development of the follow-up conference, so we decided not to go,” Richard Grenell, chief spokesman for the American mission to the U.N. in New York, told the Forward.

Over at the State Department, however, there appears to be disagreement regarding the extent to which the United States was pulling out of the anti-racism conference. A day after Grenell spoke to the Forward, Erin Rupprecht, a spokesperson for the State Department’s Office of International Organization Affairs, told the Forward that while the United States had indeed decided to stay out of the preparatory meetings for the conference, no final decision had been reached on whether to participate in the actual summit, which is scheduled for next year.

Until this past Tuesday, the United States had not publicly discussed its plans for the upcoming conference. Israeli and U.N. officials, as well as many Jewish communal observers, were surprised by the announcement, which follows Canada’s decision late last month to pull out of “Durban II,” as the conference has come to be known.

During the 2001 World Conference Against Racism in Durban, South Africa, Israel came under fire from Arab and Muslim countries, as well as from a number of nongovernmental organizations, prompting Israel and the United States to walk out in protest. This year, concerns about a repeat of Durban were ignited by the election of Libya as chair of the gathering and Cuba as its vice chair, as well as by Iran’s appointment to its organizing committee. Moreover, the U.N. gave planning oversight for the conference to its Human Rights Council, a body that has come under criticism for its focus on Israel.

The contours of the new conference, which is set to occur during 2009, will be debated during a series of preparatory meetings this year, some of them called for Passover and Yom Kippur. The timing would likely prevent Israeli officials from participating. Moreover, all the nongovernmental organizations invited to the first conference have been invited back to the second. The forum for nongovernmental organizations, which took place in parallel to the governmental one at Durban, was where the most forceful denunciations of Israel were aired.

U.N. officials privately worried that an American decision could allow hard-line countries to dominate the conference. In addition, the U.N. officials noted that if the meeting produces the same result as the first one, the U.N. would be blamed even though the conference is organized by member states and not the U.N. per se.

“The U.S. has taken an ethical stance, but it has effectively lost its leverage and credibility to affect the preparations of the conference just as key decisions about it still need to be made,” said Eve Epstein, a consultant for the U.N. Secretariat and the U.N. Foundation who said she was not speaking for any organization. “The absence of important U.N. member states gives the extremists free rein to disseminate their hateful propaganda.”

The Israeli government is still weighing its own participation in the conference, but an American decision could tilt the balance toward nonparticipation.

“There is a very serious process of evaluation going on in Jerusalem, but no decision has been reached at this point,” said ambassador Daniel Carmon, deputy representative of Israel to the U.N. “We have grave concerns about the process leading to this conference, given what happened in Durban.”

In the wake of the first Durban conference Israel was criticized for its lack of preparation and its slow response to the incidents that marred the parley. This time, the Israeli Foreign Ministry convened a meeting with Jewish organizations in late December 2007 in Jerusalem to discuss the issue. Another meeting with Jewish organizational and communal leaders from around the world is scheduled for later this month to hash out a common strategy and set up an international task force to harmonize their message.

The apparent indecision at the State Department appears to be reflected among Jewish groups, some of whom are in favor of urging Western countries not to participate in the new conference, while others prefer to be involved in the process in order to shape its outcome.

In recent weeks, most of the main American Jewish groups signed a petition, initiated by the American Jewish Committee and signed by leading human rights groups, urging a rejection of hatred and incitement and a more constructive dialogue at the review conference. Frank Diamant, vice president of B’nai Brith Canada, noted that his group was one of the few Jewish organizations not to sign the petition, “because we were confident we could convince our government to back out,” he said. “They did, and they deserve credit for talking this bold stance.”

On January 23, Jason Kenney, Canada’s secretary of state for multiculturalism and Canadian identity, announced that the planning for the new conference “has gone completely off the rails.”

“Our considered judgment, having participated in the preparatory meetings, was that we were set for a replay of Durban I. And Canada has no intention of lending its good name and resources to such a systematic promotion of hatred and bigotry,” he told the Canadian media.

Canada is known for its commitment to human rights and for its staunch support for the U.N., while America’s human rights record has been under criticism and its relationship with the world body tense. As a result, Canada’s leading position on the conference could help convince other Western countries, first and foremost the European Union, to sit out the conference or at least monitor its preparation more closely.

An American official, who requested anonymity, said that the United States had made a decision to pull out of the review conference before Canada made its announcement. But Rupprecht, the State Department spokeswoman, insisted that a decision has yet to be made. It is not clear when the divergent positions within the State Department will be reconciled.

An earlier indication of Washington’s intentions came last year on December 22, when the United States took the unusual decision to vote against the $4.2 billion U.N. budget for 2008-2009 partly because it included funding for “Durban II.” The budget is traditionally adopted by consensus, but this year it was passed 142-1. America’s apparent decision this week drew a rebuke from the U.N.

“The issue of racism is too important for states not to get it right, and there is clearly a need for them to work out their differences in the Durban II process,” Stephane Dujarric, a spokesman for Secretary General Ban Ki-moon, told the Forward on Tuesday. “It is an important issue, and the secretary general wants to get it right.”