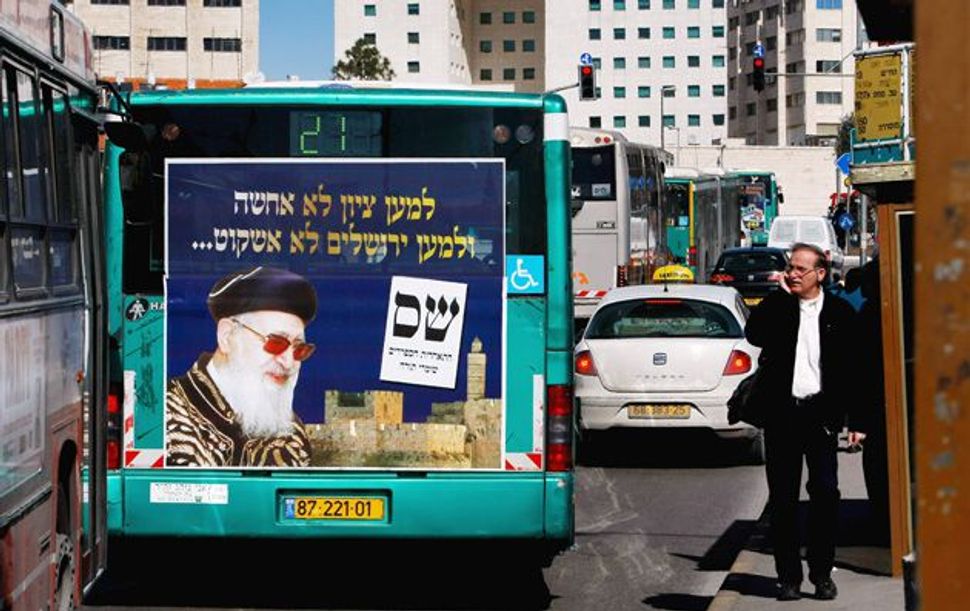 Back in 1897, several leading ultra-Orthodox, or Haredi, rabbis declared that it was prohibited for Orthodox Jews to get involved in Zionism. Their rulings came in response to the founding of the World Zionist Organization at the First Zionist Congress.

This is the very organization that Shas, the Sephardic Haredi party that currently has 11 seats in the 120-seat Knesset, has now decided to join.

“Shas wants to be part of the building of Israel, of education in the Diaspora and the ingathering of the exiles — these are the reasons it wants in these important times to join,” said Yigal Bibi, Shas’s chosen representative to the WZO.

The WZO accepted Shas’s request to join in late January, after the party met the requirement that its political platform incorporate principles from the WZO’s 2004 Jerusalem Program — essentially the mission statement of the Zionist movement — which includes the goal of “strengthening Israel as a Jewish, Zionist and democratic state.”

Some, however, fear that admitting Shas to the WZO is a mistake. Shas is a “Trojan horse,” Rabbi Uri Regev, a member of the Jewish Agency’s Board of Governors, told the Forward.

“I see Shas entering not as a triumph of pluralism, but an example of the cynical manipulation of democratic processes — not in order to strengthen Zionist activities and organizations but to abuse them,” said Regev, a leading Israeli Reform rabbi and CEO of Hiddush, an organization that pushes for religious pluralism in Israel.

Meanwhile, to Ashkenazi Haredi leaders, Shas’s move to join the WZO is nothing less than an act of treason. “The underlying worldview of Haredi Jews is that there can be no coming to terms with heresy,” thundered an editorial in Yated Ne’eman, a newspaper controlled by Israel’s most influential Ashkenazi Haredi rabbis. “The shock with which the recent move of Shas was received points to the trepidation truly God-fearing Jews feel toward any undermining of the foundations of our beliefs.”

Opposition to Zionism is considered one of the main ideological positions that differentiate Haredim from Modern Orthodox Jews. But while Shas considers itself a Haredi party, it has been more tolerant of Zionism than Ashkenazi Haredi groups have been.

In the Knesset, Shas fights on behalf of traditional Haredi causes, such as defending army exemptions for yeshiva students. Yet unlike the Ashkenazi United Torah Judaism party, Shas will accept Cabinet-level positions in Israeli governments. And the party’s spiritual leader, Rabbi Ovadia Yosef, is in favor of praying for the welfare of the state.

According to Bibi, Shas’s WZO representative, the decision to join the Zionist body clears up any confusion about the party’s position. “Rabbi Ovadia Yosef says that Shas are the real Zionists,” said Bibi, who before joining Shas had served in the Knesset representing the National Religious Party, a religious Zionist party.

But Shas’s newspaper, Yom Leyom, tells a very different story. An editorial published in late January acknowledged that Sephardic rabbis have been active in a “battle” against Zionism, and then stated: “The war is not over

and we are right in the heart of it.” It argued that while Ashkenazi Haredim have decided to fight the “war” using “old weapons,” Shas has decided to “fight from the inside.”

Shas’s strength on the “inside” will be significant. It will receive around 45 of the 585 seats at the 36th World Zionist Congress in June. The WZO has a 50% stake in the Jewish Agency for Israel, a body that spends $100 million a year on “Jewish-Zionist” education in the Diaspora and has responsibility for sending Israeli emissaries to Jewish communities around the world. By virtue of their party’s representation in the WZO, Shas representatives will fill almost 5% of seats on Jewish Agency committees and on the agency’s Board of Governors.

In another article, Yom Leyom took a swipe at the Jewish Agency, saying that it is imbuing young Jews with a “deficient” culture, and that the existing Haredi approach of staying out of the WZO would lead to “losing more and more souls.” Yom Leyom wrote of the need to curb the influence of Jewish Agency emissaries who are “undermining Torah” and pointed out the importance of its WZO membership in “stopping the Reform.” It outlined an explicitly outreach-driven agenda, writing: “All that we want to do is bring more and more Jews to their Father in Heaven.”

Bibi said that Shas wants to see its world-view reflected in the work of the WZO and the Jewish Agency. “Shas is obliged to take part in this,” he said. He added that this is legitimate as every faction in these organizations does the same.

Some inside the Jewish Agency take the view that whatever mixed messages are coming from Shas, Haredi representation in the WZO broadens the Zionist movement and should thus be welcomed. The Jewish Agency’s treasurer, former Labor lawmaker Haggai Merom, called Shas’s move a “historic development.”

Regev, however, said he is “gravely concerned” that the Zionist movement will become a tool for dissemination of Shas’s Haredi ideology as the party tries to “carry out what it feels it can do by clout in the WZO just as it does in Knesset.” He said he fears that it will “push out” non-Orthodox voices from the Zionist movement, and believes that its antagonism toward the Reform and Conservative movements undermines its ability to work within the organization.

But even as Regev criticizes Shas for its hostility toward the Reform and Conservative movements, the party’s Haredi critics are accusing it of legitimizing them. Yerach Tucker, spokesman for Knesset member Moshe Gafni of the United Torah Judaism party, told the Forward that his party is outraged that Haredim will sit in a forum with movements that “want to destroy Torah, want to destroy am yisrael,” Hebrew for the Jewish people.

But Bibi countered that there is no difference between sitting in the Knesset, as Gafni does, and serving in the WZO, and said that UTJ should consider following Shas’s lead. “In three or four years they will understand that they also need to join,” he said. “They need to understand that Zionism of old fulfilled its aim of establishing a state, and now there are new challenges.”