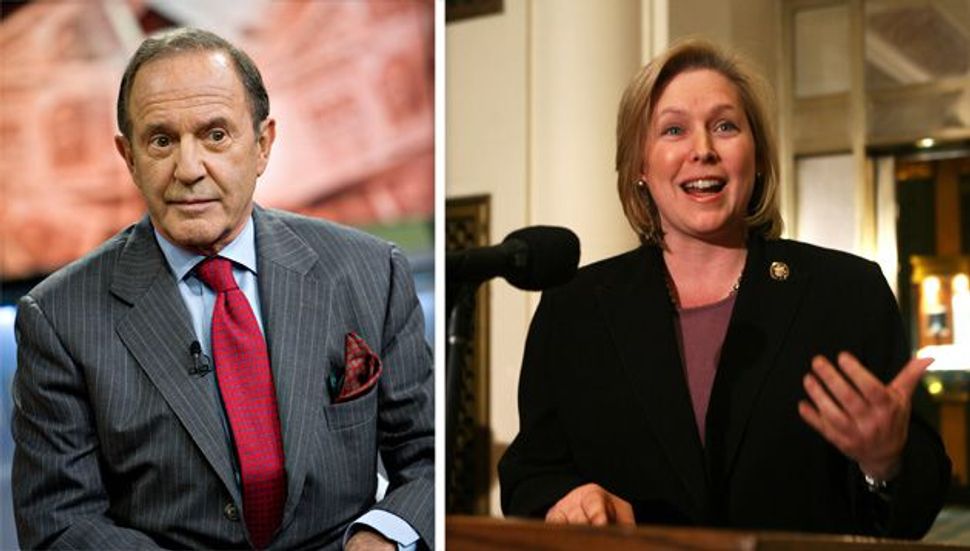 While the U.S. Senate is full of Jews (13 at last count), it boasts no alumni of the world of Jewish politics. That could change. According to recent reports, billionaire real estate mogul Mortimer Zuckerman, a prominent Jewish communal figure and veteran of the Jewish political scene, is considering a run for Senate in New York.

A founder of Boston Properties and the owner of a media portfolio that includes the New York Daily News and U.S. News & World Report, Zuckerman came to prominence in the Jewish community during a turbulent term as lay leader of the Conference of Presidents of Major American Jewish Organizations, a powerful umbrella group on matters pertaining to Israel. His possible Senate candidacy to replace upstate incumbent Kirsten Gillibrand, a Democrat, was reported February 12 in The New York Times and has garnered a measured response from Jews in politics and from Jews in Jewish politics.

“He’s got a four in 10 shot,” said Hank Sheinkopf, a prominent New York political consultant. “It’s not the craziest idea I ever heard.”

Zuckerman, 72, whose opinion columns and regular television appearances leave a long trail of unvarnished and, perhaps, politically inconvenient opinion, has not confirmed the story, and did not respond to a request for comment. But according to a report in the New York Times, Zuckerman has approached former New York governor George Pataki and New York State Republican Chairman Edward Cox about a possible run.

While some sitting Jewish senators have strong ties to the Jewish community, none has held such a prominent leadership position in a policy-oriented Jewish organization. The closest was New Jersey Senator Frank Lautenberg, who was a member of the Board of Governors of the Jewish Agency for Israel and, in the mid-1970s, chairman of the precursor organization to what is now known as the Jewish Federations of North America. Neither of those positions, however, is as policy focused or as prominent as the position that Zuckerman held.

“There are lots of people who have been very prominent in Jewish causes who have gone on to be big fundraisers or big donors to politicians,” said L. Sandy Maisel, a professor of government at Colby College, “but not who have run.”

A major philanthropist whose wealth Forbes pegged at $1.5 billion in 2009, Zuckerman came to prominence within the organized Jewish community amid rumors that he would be named to the top lay position at the Presidents Conference in late 1995. That story was first written in a critical column in this newspaper by liberal commentator Leonard Fein, who called Zuckerman’s background in Jewish communal life negligible. Fein wrote that Zuckerman was eligible for the position after becoming vice president of a little-known advocacy group called the America-Israel Friendship League just four months earlier, and that that organization had been only part of the Presidents Conference for half a year.

“Ross Perot, the outsider, had and has deeper roots in American politics than Mort Zuckerman does in Jewish politics,” Fein wrote.

Zuckerman’s name was then dropped from the list of probable candidates to lead the Presidents Conference after his 1996 marriage to Marla Prather, a non-Jew, according to a report in the Forward. A spokesman for Zuckerman denied the story at the time.

Zuckerman split with Prather in 2000. A year later, he was elected to lead the Presidents Conference over protests by six liberal Jewish groups, which were concerned that the right-of-center positions on Israel that he expressed in his U.S. News columns would be seen as official pronouncements of the Jewish community.

“There’s the potential for difficulties for the Conference and for the Jewish community in that anything he writes, particularly on the Middle East, will be seen as reflecting the will of the Conference and the Jewish community,” Rabbi Eric Yoffie, then and now the head of the organization now known as the Union for Reform Judaism, said at the time.

That same year, Zuckerman and Malcolm Hoenlein, the powerful executive vice chairman of the Presidents Conference, published a statement supporting the Israeli government’s controversial decision to close the Jerusalem office of Palestinian Authority representative Sari Nusseibeh. The Israeli government later reversed the decision, and Yoffie penned an opinion piece in the Forward, writing that within the Presidents Conference, “no consensus existed on Nusseibeh and that no attempt had been made to formulate one.”

But while the former executive director of Reform Judaism’s Zionist movement criticized Zuckerman in 2002 for publishing the Iraq editorial, he now says his chairmanship was a success. “I think, in retrospect, he turned out to be very accomplished and well within the consensus,” said Ammiel Hirsch, now rabbi of the Stephen Wise Free Synagogue in New York.

One concrete victory came in February 2003, toward the end of Zuckerman’s term, with the freeing of a group of Iranian Jews who had been accused of spying for Israel by the Iranian government, and for whose release the Presidents Conference had been lobbying for years.

Political analysts contacted by the Forward are not convinced of Zuckerman’s seriousness as a Senate candidate.

“I can’t believe that he would want to go through the nuts and bolts of a campaign, especially at his age,” said George Arzt, a New York Democratic political consultant. “I can’t imagine Mort going to Oswego and Plattsburgh and places like that.”

A Siena College poll released on February 22 had Zuckerman trailing Gillibrand by 20% and possible Democratic challenger Harold Ford Jr. by 14%.

“Every editorial, everything he has ever written or done or thought, will now become public knowledge” if Zuckerman mounts a campaign, Sheinkopf said. “And he will be savaged.”