‘Jews’ Parade on the Streets of Vilna 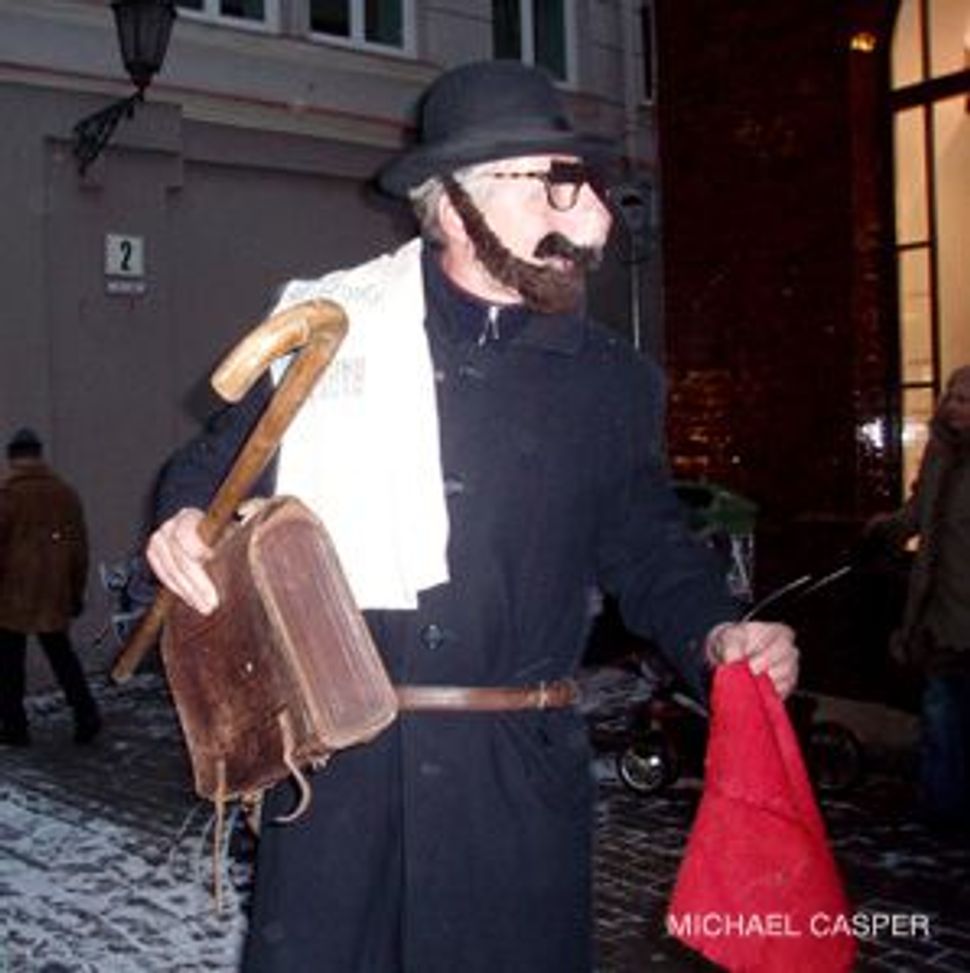 ‘Going as a Jew?: Each year in the capital, Lithuanians celebrate the holiday of Uzgavenes by dressing up and acting, in rather unflattering ways, ?as Jews.? 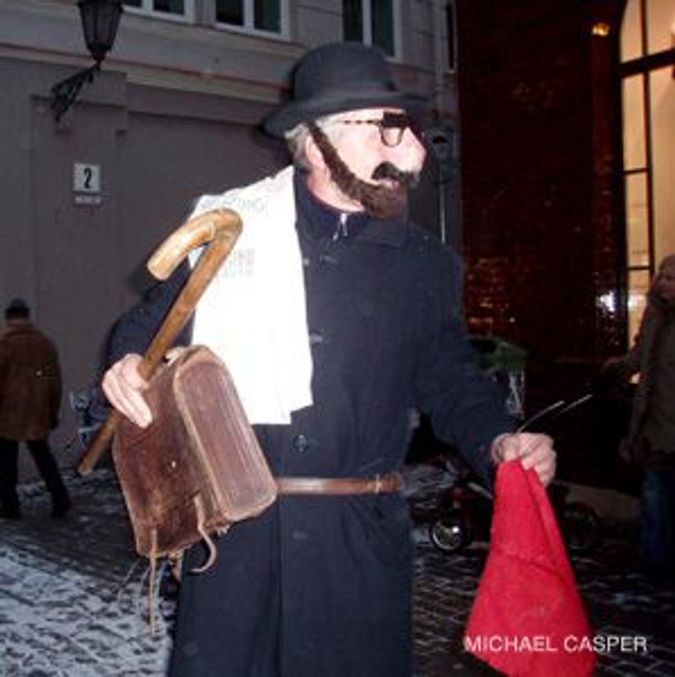 'Going as a Jew?: Each year in the capital, Lithuanians celebrate the holiday of Uzgavenes by dressing up and acting, in rather unflattering ways, ?as Jews.? 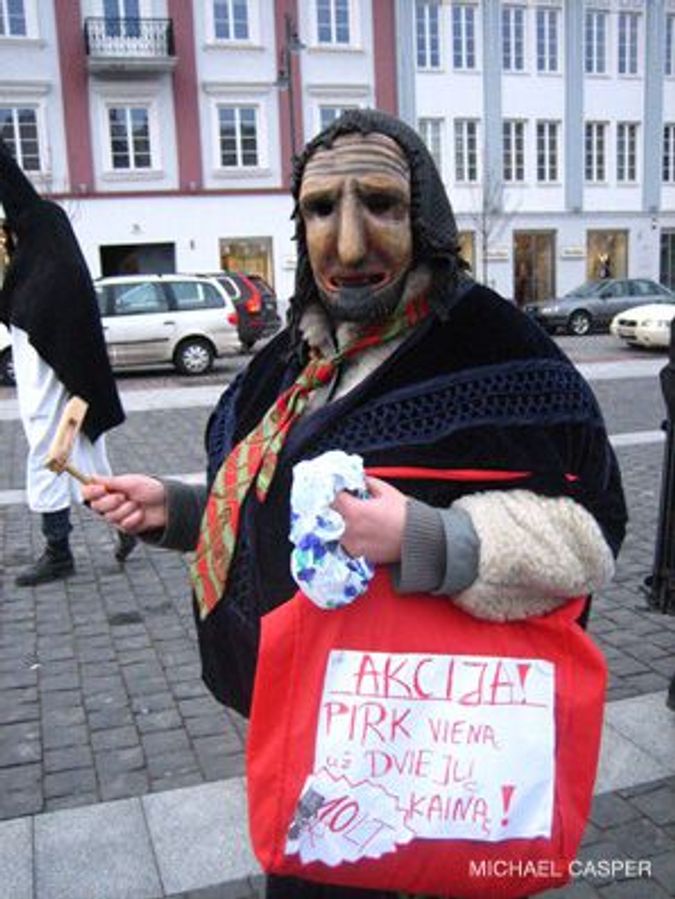 Funny, You Don't Look Jewish: A reveler during the Lithuanian capital's pre-Lent celebration dressed as a 'Jew.'

Last week, a samba group in Rio de Janeiro caused an international furor when it announced its intention to participate in the city’s Carnival event on a float depicting Holocaust victims. After outcries from the Brazilian Jewish community, a judge banned the group from using the float.

Although less well known, a similarly questionable effort to celebrate the same holiday takes place in this city, once known as the Jerusalem of Lithuania because of the breadth and piety of its Jewish community. During Carnival — or Uzgavenes, as it is known in Lithuania — Catholics from around the world congregate for a feast of foods prohibited during Lent. The festival usually involves a parade or circus, with attendees in masks and costumes. But in Vilnius — commonly known to Jews as Vilna — participants traditionally dress and act “as Jews,” a feat that generally calls for masks with grotesque features, beards and visible ear locks and that is often accompanied by peddling and by stereotypically Jewish speech.

Perhaps even more shockingly, the “festivities” extend beyond the parade itself and into a Halloween-style trick-or-treating. When Simonas Gurevicius, the 26-year-old executive director of the Jewish Community of Lithuania, opened the door to his house during last year’s Uzgavenes, he was greeted by two children dressed in horns and tails, reciting a song that translates as, “We’re the little Lithuanian Jews/We want blintzes and coffee/If you don’t have blintzes/Give us some of your money.” (It rhymes in Lithuanian.)

“They understand it as Halloween, a time to have fun and adventures,” Gurevicius said. “On one hand, it is important to respect the traditions of the country. On the other hand, psychologically it stays in their brain: The image of the Jew will be closely associated with the image from the festival.”

Jewish history in Lithuania, centuries long and distinguished by a profusion of yeshivas and Torah scholars, nearly ended when most of the country’s Jewish community was murdered during the Holocaust. Today, the small but close-knit community hosts school groups at its center for educational sessions on Jewish life.

But according to Gurevicius, members of the Jewish community do not speak out against the parade, because they wish to avoid conflict with Lithuanians. “For sure, the Jewish people don’t like so much the way Jews are shown with the other creatures,” he said. But, “someone could say we don’t understand the humor. People think it’s normal.”

Diana, a 20-year-old Jewish medical student from Vilnius who did not wish to give her last name, was surprised to learn that Lithuanians dress as Jews during Uzgavenes. “It’s not the most pleasant thing, but it could be worse” she said, adding that “they could be smashing menorahs” — a reference to protests surrounding the erection of a large menorah in the Lithuanian town of Siauliai last December.

Last Saturday, hundreds gathered in front of city hall in the capital to celebrate. The Web site of the Vilnius City Municipality promised that during Uzgavenes, which is an official holiday in Lithuania, “creatures wearing different masks — devils, witches, deaths, goats, Gypsies, and other joyful and scaring characters — hang around.” Claiming to be dressed as a Jew, one woman tried to convince spectators to buy dirty handkerchiefs.

Although typical costumes include farm animals and monsters, masquerading is sometimes broadly referred to as “eiti zydukais,” or “going as Jews,” regardless of how one dresses.

The Roma do not fare better. Participants who masquerade as “Gypsies” wear gaudy makeup, hold babies and ask bystanders for money.

Last Friday, Vilnius’s Center of Ethnic Activity hosted an exhibition of Uzgavenes masks and screened archival footage of past celebrations. Masks of Jews were displayed between those of witches and animals, and shown with no apparent compunction to cultural delegates from Latvia and Denmark. In a video shot in Vilnius last year, a man dressed as a Jew carrying a briefcase full of toilet paper haggled with cab drivers as he led a group of people made up as beasts through the streets.

“From my point of view,” said Svetlana Novopolskaja, director of the Roma Community Centre of Vilnius, “Lithuanians like to dress as Roma, like their music and habits, but don’t like Roma as people. They accept them as personages from fairy tales — as hobbits, for example — and are surprised and afraid when they meet real Roma.”

Ethnologist Inga Krisciuniene, who works at the Centre of Ethnic Activity, led the event, explained how she believed that in earlier times, Jews and Gypsies dressed alike. Revelers wore the same mask on Uzgavenes to depict them, so that the characters were distinguishable only by performers’ actions. When asked whether it could be seen as offensive to mock these minorities, Krisciuniene replied, “No one has ever complained.” The intent, she said, is humorous.

“Besides,” she added, “it’s true that Gypsies steal.”

‘Jews’ Parade on the Streets of Vilna