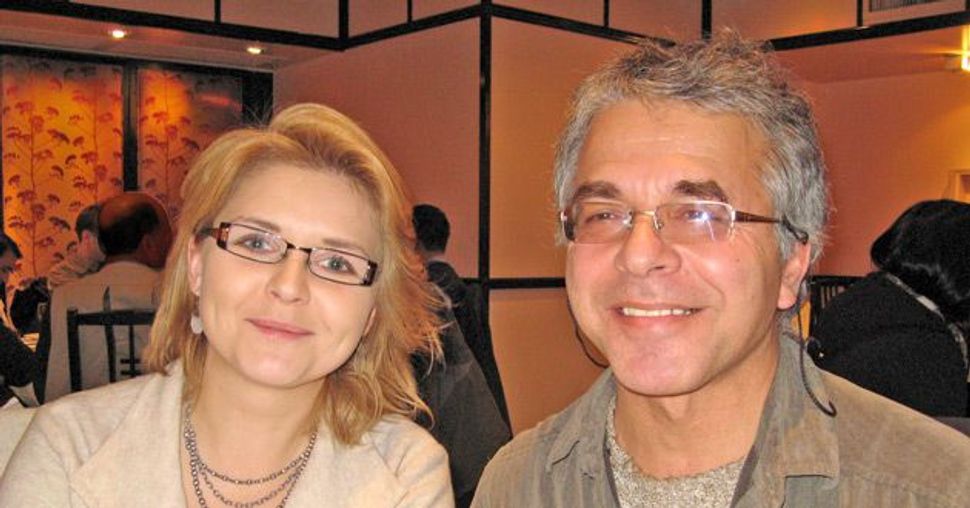 “By adding ‘Jewish’ to our title, we now get [more] media attention!” joshed American Sephardi Federation/Sephardic House President David Dangoor to the February 4 opening night crowd at New York’s Sephardic Jewish Film Festival, which ran until February 11. The evening’s hit was the New York premiere of “Coco” (in French, with English subtitles) starring Gad Elmaleh as the film’s eponymous character, a frenetic nouveau riche Moroccan Jew with an ego off the Richter scale. He dazzles the public! He dazzles the powerful! And he had had the French-savvy audience at the Center for Jewish History roaring and me laughing and cringing. The program notes inform that Elmaleh was awarded the chevalier dans l’ordre des Arts et des Lettres, or Order of Arts and Letters, medal by French Minister of Culture Renaud Donnedieu de Vabres in March 2006 (a presentation incorporated into “Coco”), and in January 2007, Elmaleh was elected “le personnalité la plus drôle de France,” which mean “the funniest person in France.” This 2009 film is slick and chic and unwinds at the speed of a bobsled ride. Coco’s over-the-top bar mitzvah for his son — a turning point in his life — dwarfs all other film bar mitzvahs I’ve seen to date in both scale and chutzpah.

In the presence of Spain’s consul general, Fernando Villalonga, Dangoor presented the AFS’s Pomegranate Award to festival founder Janice Ovadiah, filmmaker Haim Shiran and Morrie Yohai, vice president of Sephardic House. Dangoor explained: “Ashkenazim only have honey; we have the pomegranate — a blessing. May we perform as many good deeds as — or multiply as — the seeds of the pomegranate.”

Among the SFA’s 20th annual Film Festival offerings was the American premiere of “Léon: A New Encounter.” Directed by mother and son Margalit and Jack Matitiahu in Spanish and Ladino and with English subtitles, the film at times is more fable than history, as you encounter the remains of a 10th-century settlement that evolved into “Jewish Leon” — a city where, according to the narrative, “Jews were the king’s property [and] enjoyed [his] protection.” Between the 10th and 15th century, it was noted, “Jewish and Christian lives were intertwined.” Leon-Calahora, where my father’s ancestors had roots in the 1400s, is also the birthplace of Moses de Leon , the 13th-century kabbalist (“The Zohar”). The narrative informs that in order to save their Jewish friends and neighbors, many “nobles gave their names to Jews,” and that there is “Hebrew blood flowing in the veins of many prominent Spanish families.” (Following its New York premiere, “Léon: A New Encounter” was shown at Mikveh Israel in Philadelphia on February 21 and at the Athens International Film Festival on February 22.)

The seductive, melodic, want-to-clap-along documentary “Mashalá” (“Congratulations!” in Ladino, Turkish and Arabic) introduces Canadian singer Ellen Gould Ventura, who performs Ladino songs in a public square in Barcelona. Directed by Cyrus Sundar Singh, the film showcases Ventura, who discovered late in life that her family was Sephardic Jews with roots in Spain. Now settled in Barcelona, she declares: “We’re now in de-exile.” Ventura performs with four gifted instrumentalists — from Chile, Morocco, Italy and Venezuela — and following a meal they share, one of the musicians joshes: “It was a mix of kosher, halal, paella and ham.” Ventura avers: “I identify myself with Judaism in a cultural way. [I’m] not devout and I don’t practice,” but, she informs, “I teach my [five] children… according to the Sephardic-Mizrachi tradition…. [Even] if my children have no place to go, they will always have roots.”

On February 21, I had dinner with Emmy-winning filmmaker Slawomir Grunberg. Two of his recent films — “The Peretzniks,” a 2009 Polish film that had its American premiere at the recent Jewish Film Festival, and “Saved by Deportation: An Unknown Odyssey of Polish Jews,” the December 2006 award-winner at the Washington Jewish Film Festival — evoked painful memories. In “The Peretzniks” we meet people ranging in age from 55 to 75 who recall their adolescent friendships and crushes in postwar Lodz, where they attended the Yiddish-language Peretz School, named after the Yiddish writer I.L. Peretz. One of its alumni is architect Daniel Libeskind. Dispersed throughout the world following Poland’s 1968 antisemitic purge, the film chronicles the alumnis’ reunion in Israel, where the conversation is in Polish and not a word of Yiddish is spoken.

In “Deportation,” the fate of Polish Jews exiled to Siberia in 1939 following the Hitler-Stalin pact and their subsequent hegira through Uzbekistan and Tajikistan replicates my father’s near-death travails at that time and place — about which he never spoke. Joining us at dinner was Grunberg’s friend Katka Reszke, who, like Grunberg, learned of her Jewish roots as an adult. Special project director of the North American Council of the Museum of the History of Polish Jews (in Warsaw), Reszke, who is the editor and assistant director of “The Peretzniks,” discovered that both her grandmother and mother were Jews. Holding Polish-Israeli citizenship, Reszke received her doctorate in Jewish studies at Jerusalem’s Hebrew University. Her doctoral thesis was “The Identity of Young Polish-Jewish Adults.” Grunberg, who was born in Lublin and whose father still lives in Torun (Copernicus’s birth town), knew not of his roots until his mother, before dying, told him, “We are Jewish.”

At Lodz’s Peretz School, which was the last Jewish school in Poland before its students fled to Denmark, Sweden, France, the United States and Israel, all subjects were taught in Yiddish — including Polish! Following the establishment of Israel, Polish antisemitism was ratcheted up. Israel’s birth was perceived as “aggression.” A secular school, some of its students were not Jewish, but were children of Polish instructors or Jehovah’s Witnesses. The Peretzniks consider themselves an extended, worldwide family that substitutes for the grandparents, uncles, aunts and cousins lost in the Holocaust, with whom they celebrate each other’s simkhas.

In “Saved by Deportation,” Grunberg follows 58-years-married Asher and Shifra Scharf as they retrace their wartime odyssey, which began in Poland, to Siberia, to Tashkent [Uzbekistan] to Tajikistan and Stalinabad, before their postwar rescue and return to Poland. They dealt with starvation, typhoid and unbelievable living conditions, including “bedbugs falling on you at night from the ceiling,” working in coal mines and felling trees in 50-below zero. Yet, without exception, the local populations — Christians, Muslims, Russians, Tajiks, Uzbeks — treated them, and their fellow exiles, with kindness, often sustaining them during difficult times. Not one incident of antisemitism, until their return to Poland! Back in the United States, the Sharfs, now in their 80s, share their memories with fellow deportees, some of whom are members of the Hasidic community. (I can’t remember how many children, grandchildren and great-grandchildren there were from among these survivors.) Bottom line: “If we had not been deported to Siberia,” every deportee in the film concurred, “we would have perished in the Holocaust.”