Jerusalem Pitches Goldstone Report as a Threat to U.S. Military and its Allies 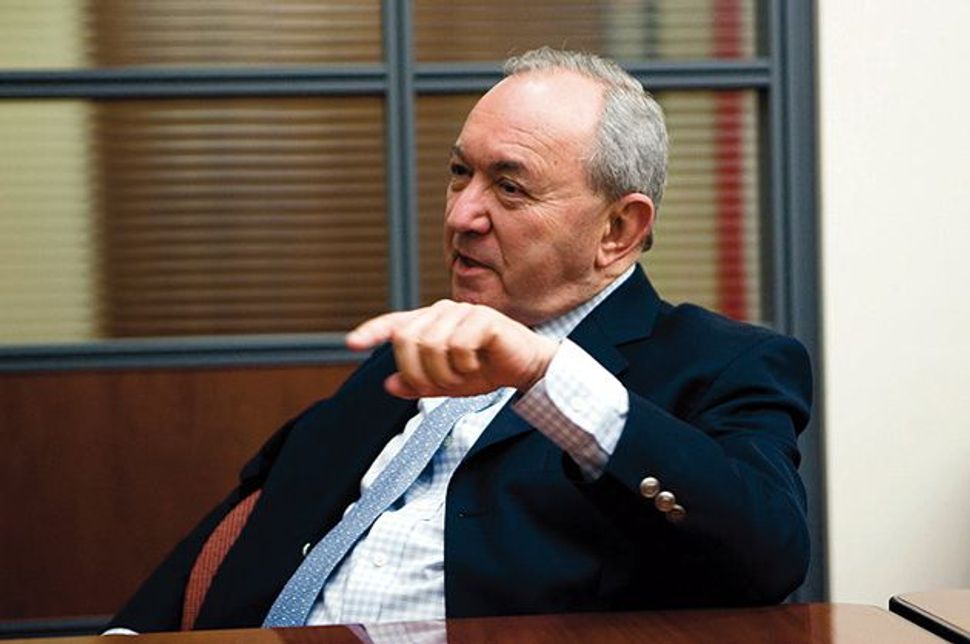 No Threat to U.S.: Judge Richard Goldstone argues that in contrast to Israel in Gaza, the United States has ?gone to extremes? to protect civilians in its conflicts in Kosovo, Iraq and Afghanistan. Image by ARIEL JANKELOWITZ

In a newly emergent theme, American supporters of Israel are stressing the possible damage that the Goldstone Report on Israel’s Gaza operation may cause to America’s military efforts worldwide.

As the report, sponsored by the United Nations, won a nonbinding vote of support in the U.N. General Assembly recently, pro-Israel figures were striving to marshal wider opposition to it by arguing that its potential targets range far beyond Israel.

This reasoning, which implies that America could be the next target for a Goldstone-like investigation, has been gaining traction in the United States and was recently endorsed by Secretary of State Hillary Rodham Clinton. Essentially, its advocates argue, countries such as the United States and its allies in Iraq and Afghanistan, and even Russia, with military operations of its own, could be targeted as criminally culpable for civilian deaths under the legal standards used by Goldstone.

So far, based on the voting on the Feb. 26 U.N. resolution, many of the countries other than America toward whom Israel is aiming this argument seem unpersuaded.

The September 2009 report, commissioned by the U.N.’s Human Rights Council and headed by South African jurist Richard Goldstone, found that both Israel and its adversary Hamas had deliberately hit civilian targets and committed war crimes and possibly crimes against humanity. It called on Israel and Hamas to launch open and independent investigations into the alleged human rights violations cited by the probe.

Israel’s military has launched 36 internal criminal probes related to alleged human rights violations during its December 2008 to January 2009 Gaza campaign. It claims that its military investigators conduct these probes without interference. But Israel has rejected international calls, including from the United States, for an independent outside investigation. At the same time, Washington is allied with Jerusalem in fighting attempts to sanction Israel in the U.N. for failing to implement the Goldstone recommendations.

In Congress, New York Democrat Gary Ackerman, chairman of the House Subcommittee on the Middle East and South Asia, is one of those leading the new argument against the report. Ackerman stressed, in a February 25 Foreign Affairs Committee hearing with Clinton, “It’s not Israel that I raise the concern about.” He said he was worried about the implications of Goldstone’s report for the United States.

The number of civilians killed by America’s military in Iraq and Afghanistan is “certainly a number multiplied by some huge multiple compared to the number of civilians that were killed as Israel pursued terrorists in Gaza,” Ackerman said. He warned that if Goldstone’s report were to be adopted as an international standard, American officials could be prosecuted for war crimes outside the United States.

Clinton agreed that the Goldstone Report posed a potential threat to Americans. She said it should be subject to “strong domestic review” for its implications regarding America’s military operations. “It is not only the United States if this international standard, as you say, were to morph out of this report, but nearly every other country would similarly be held to account,” Clinton said.

No official count of civilian casualties caused by the United States and its allies exists. But international human rights groups estimate that more than 5,000 of those killed in fighting in Afghanistan were not clearly combatants. In Iraq, estimates of those killed who were not clearly combatants range from tens of thousands to more than 100,000. But many of them died as a result of sectarian infighting, not directly from United States or coalition fire. Further, while these numbers screen out clear and obvious combatant deaths in both war zones, human rights groups caution that combatants may still be included within the estimates.

In Operation Cast Lead, as Israel has dubbed its Gaza campaign, estimates of civilian casualties range from Israel’s official count of less than 300 to human rights groups that count more than 700 civilian deaths.

But Fred Abrahams, a senior researcher at Human Rights Watch, said that the focus on civilian deaths per se was misplaced. “It is not how many civilians died, but how they died,” he said. Under international law, civilian deaths are not viewed as illegal if every feasible measure to avoid them was taken, he said. But the findings of his group and those of Goldstone’s U.N. committee suggest that Israel did not take these measures.

The Goldstone Report itself, in fact, gives little importance to the number of civilian victims and focuses on the questions of whether they were targeted on purpose and whether appropriate measures were taken to avoid hurting noncombatants. In its conclusion, the U.N. committee stressed that Israel’s fault was in not distinguishing between civilians and military targets as part of “a deliberately disproportionate attack designed to punish, humiliate and terrorize a civilian population.”

Last October, in an interview on PBS’s “Bill Moyers Journal,” Goldstone rejected the notion that his criticism of Israel might apply to American military conflicts. The South African judge called this argument a “smokescreen.” The United States, in contrast to Israel in Gaza, Goldstone argued, has “gone to extremes” to protect civilians in its conflicts in Kosovo, Iraq and Afghanistan, and has apologized when mistakes were made. “I’ve got no doubt that the laws of war are sufficient to cover the situation of fighting what is now termed ‘asymmetric war,’” Goldstone said.

Daniel Mariaschin, executive vice president of B’nai B’rith International, termed this to be “gratuitous parsing.” Mariaschin, whose group argued against adoption of the Goldstone Report at the October 2009 meeting of the U.N. Human Rights Council, said, “Judge Goldstone is not looking at the broader impact that his report has brought on the world.”

The emphasis on international ramifications of the Goldstone Report comes as Israeli diplomats see the international community moving away from attempts to sanction Israel for events of the Gaza operation. Israeli officials contrasted the February 26 U.N. General Assembly resolution supporting the Goldstone Report, which was nonbinding and set no deadline for completing the investigations it supported, with a November 2009 resolution that had much tougher language.

Nevertheless, some of the countries that Israel claims should feel most threatened by Goldstone did not take Israel’s side in the more recent vote.

The Arab-sponsored resolution, which called for continued investigation into alleged Israeli and Palestinian war crimes committed during the Gaza operation, was adopted with 98 of the 192 member countries voting for it, 31 abstaining and seven voting against it. Britain, Australia and several other countries with troops in Afghanistan or Iraq were among those supporting the resolution despite Israel’s argument that they, too, could be subject to international investigation if they cause severe damage to the civilian population.

The U.N. vote also showed that Europe’s view of the Goldstone Report is still far from that of Israel. The European Union countries split between support for the resolution and, via abstention, taking no opinion. And on March 10, the European Parliament formally endorsed the Goldstone Report and urged its 27 member states to monitor the Israeli and Palestinian probes into the war crimes the report alleges.

Israel’s alleged use of forged passports in connection with the recent murder in Dubai of Hamas activist Mahmud al-Mabhuh was said to have played a role in this vote. According to press reports, Australia and several European countries chose to support or abstain on the resolution to express displeasure with Israel’s alleged forgery of their countries’ passports. There was no official confirmation of these reports.

Jerusalem Pitches Goldstone Report as a Threat to U.S. Military and its Allies