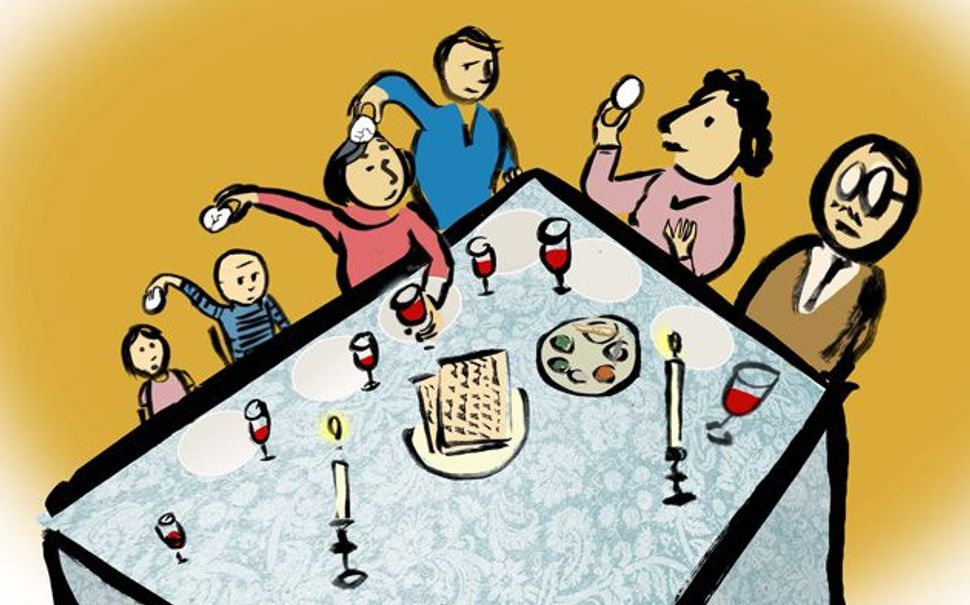 About 30 years ago, when Illinois businessman David Brimm’s son was 2 years old, the family turned off the TV just before guests arrived for Passover dinner. Soon the Four Questions were being asked, and young master Brimm piped in with a fifth: “Why did you turn ‘The Smurfs’ off?”

The family still asks that question today, as part of the Seder.

In part — okay, in more than part, in essence — Passover is all about remembering and re-enacting the Exodus. This is what the Lord did for me, when I went forth from Egypt. Maybe because it is a holiday so devoted to keeping a story alive, it seems to have inspired a lot of folks to do the same on a family level. Two grown brothers will annually re-enact the horse radish-eating contest they started in their teens. A family that sang “Die, Die Agnew” in 1973 will sing it again. (Well, mine will.) Or someone will pass the hardboiled eggs, and suddenly everyone’s cracking them on each other’s heads, the way they did as kids and now their brood does, too. My husband’s family certainly never fails to bring up the Elijah Incident of 1969.

One year when my husband was young and his family had a Seeing Eye dog, because his dad was blind, they came to the part in the service when the door is opened for Elijah. At that very moment, the normally dutiful Snow sprang up, ran to the door and sniffed her way straight back to the table. She waited there a second, then sniffed back to the door, as if following someone who had come in, sat down for a drink and then left.

My kids tell the story now, too, even though they never met their grandpa. It is a sacred relic, sure as any shank bone. What surprised me is that after I started asking other people for their Passover memories, I heard another tale just like it — but with a cat.

For Sharon Geller-Metal, who runs Gotham Judaica in Queens, all the memories center on the Haggadah. That’s because her mother, Hanya, spent most of the Seder in the kitchen, but would pop out whenever the family reached a point in the Haggadah at which everyone’s presence was required, and all would yell out, in unison, “Han!”

Now Geller-Metal is a grandmother of four, and she spends most of the Seder in the kitchen. But when three generations yell in unison “Sharon!” she smiles and bustles out.

Tradition, tradition. It comes not just from matzo and macaroons, but also from that one time something happened that always bears repeating. For instance, there was the time that Tana Goldberg’s homemade gefilte fish was ravaged by her dog, “and no one had the nerve to tell me,” the communications director of the Solomon Schechter Day School of Greater Boston, in Newton, Mass., recalled. Instead, her guests reshaped the balls and put them back on the platter. She just couldn’t figure out why no one wanted any that year.

And speaking of dogs (which do seem to come up a lot), Long Island publicist Lori Goldman Ames remembers her parents telling the story about the time her grandmother had made a huge bowl of farfel and left it on the table. “My mom’s cocker spaniel, Debbie, ate the whole bowl, and they thought she was dead because she was lying on the floor, not moving,” she said.

Eventually, Debbie did wag a tale again. But frankly, most of us look like that at the end of a Seder. For this we must thank not just the food, but also the wine. Which brings us to Roger Friedensen’s story.

“My sister Fran and our cousin Harriet were best friends growing up in New York and always used to spend Pesach together,” the business consultant explained. “One year, they filched a bottle of wine for the kids’ table, got tipsy and began singing Christmas carols.” They were 13 at the time. “My parents were not amused.”

In the mid-60s, the Friedensen family moved to North Carolina, and those familial Passovers stopped happening.

Fast-forward a generation or two, and suddenly Harriet starts coming down to North Carolina for the Seders! Friedensen said, “This past year, my sister and Harriet again filched a bottle of wine — this time, from the kids’ table.” Now, nearly 60, but giddy as teenagers, they got tipsy, and can you guess what they sang?

Hint: It involved the decking of halls.

Food, smells, music — take your pick. Passover presses all the memory buttons. But Goldman-Ames tells one more tale, and music takes the (unleavened) cake: “When my aunt was still alive, we would always call her when we got to ‘Dayenu.’ Because even in her worst state of dementia, she would always sing the refrain with us over the phone.”

Lenore Skenazy is the co-author of “Who’s the Blonde That Married What’s-His-Name? The Ultimate Tip-of-the-Tongue Test of Everything You Know You Know — But Can’t Remember Right Now” (Wiley, 20009).