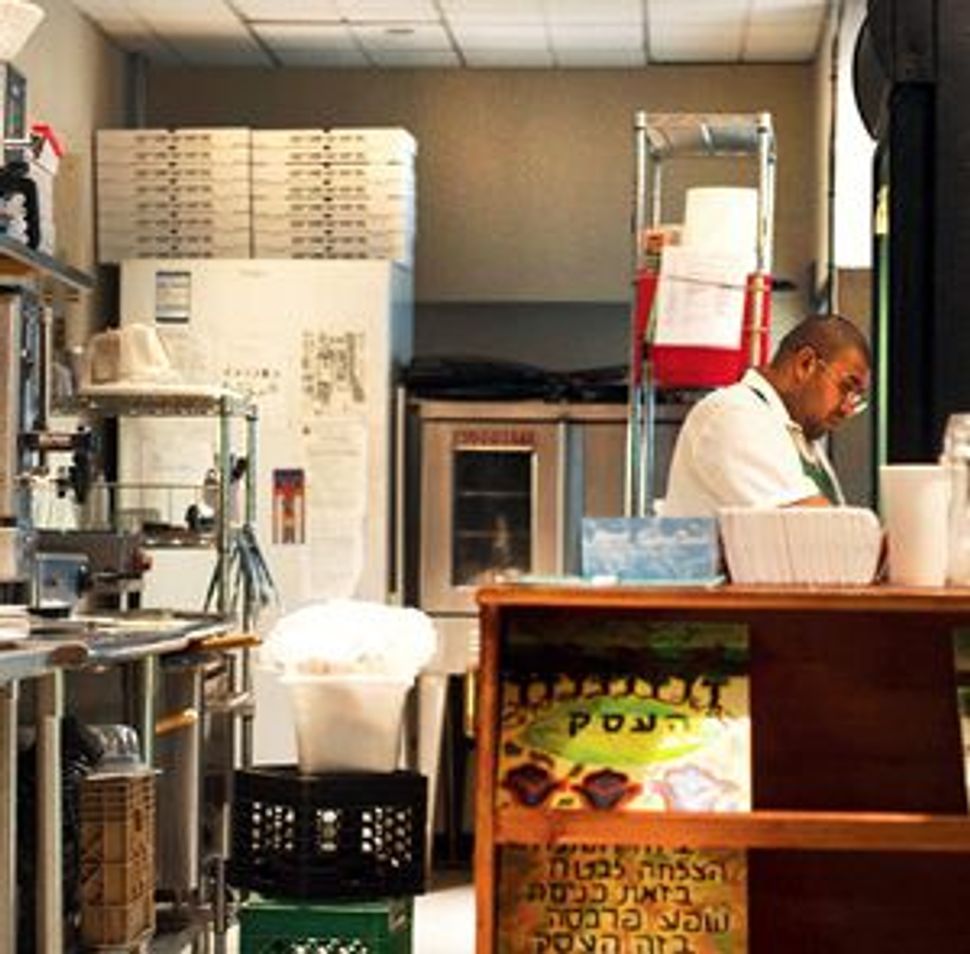 Well-treated?: A cook works in the kitchen of Cafe Nana in Manhattan. Image by ARIEL JANkELOWITZ 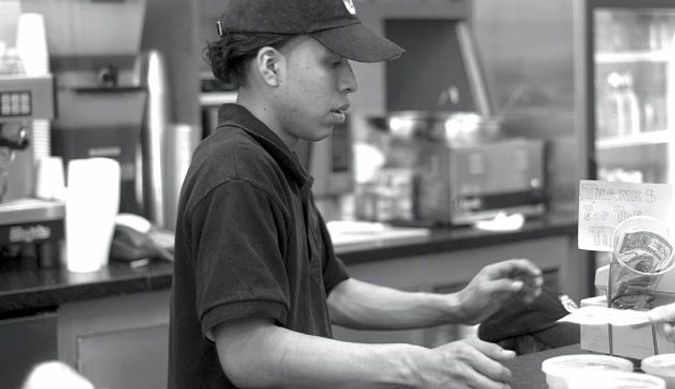 Working: Julio Torres is an employee at Cafe 76, which has recieved a Tav HaYosher. Image by ARIEL JANkELOWITZ

The small kosher falafel joint called Soom Soom, on West 72nd Street in Manhattan, was bubbling with activity on a recent afternoon. In the kitchen, glimpsed through an open door, falafel balls were frying and a giant pot of hummus was being stirred, as half a dozen Latino employees fielded orders yelled out from a front counter covered in a rainbow of Israeli salads.

The customers, sitting on wooden stools in the cramped space, all praised the deliciousness of their pita sandwiches. They were also aware — at least some of them were — that this lunch spot was one of 36 that have been granted a Tav HaYosher, or ethical seal, for its treatment of its workers.

“But you don’t need to see the seal,” said David Cohen, a regular customer whose face was smeared with hummus and hot sauce. “Just look at how happy the employees are. You want to be in a place where the people are treated right.”

The ethical seal was issued by Uri L’Tzedek, an Orthodox social justice organization, and could be found pasted onto a refrigerator just underneath the restaurant’s kosher certification. It was granted, the document stated, in recognition of “work practices that respect the pay, time, and dignity of its workers.”

Tav HaYosher has been one of Uri L’Tzedek’s most successful programs. According to the owners of a few Manhattan kosher establishments who spoke to the Forward, the seal has gotten them business and been a draw for customers aware of the importance of ethical work standards. The number of certified restaurants has also increased. Started less than a year ago, the Tav HaYosher is now displayed in three dozen establishments in five different states, with four more restaurants in the works.

The demand for ethical guidelines in the wake of the mistreatment of workers at Agriprocessors, once the largest kosher meat plant in the country, has made some in the Orthodox community receptive to the new initiative.

Uri L’Tzedek, however, doesn’t ask kosher eateries to do more than meet the most basic labor laws. Employees must be paid minimum wage, not work excessive hours and have a safe, clean environment. Other social justice concerns, such as providing workers with health care, are not part of the standards. Neither is a stipulation that the workers are here legally. In this, the Tav HaYosher hews closer to the guidelines set forth recently by the Rabbinical Council of America, the national organization of Orthodox rabbis, which suggests that the producers of kosher meat also abide by the law. Another type of ethical seal that has been embraced by the Conservative establishment, the Magen Tzedek, is more activist in its approach, calling for a wide range of social justice measures that go above and beyond just respecting basic legal standards. 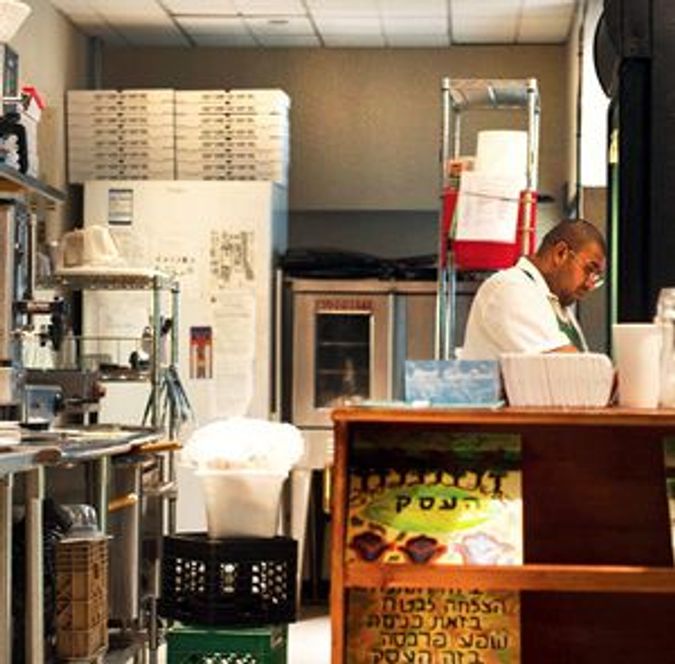 Well-treated?: A cook works in the kitchen of Cafe Nana in Manhattan. Image by ARIEL JANkELOWITZ

“When I went into this, I wanted a living wage, health care, all kinds of benefits, but came to realize that even the most basic things were not being respected,” said Shmuly Yanklowitz, founder and president of Uri L’Tzedek. “But also, in the Orthodox community, it gives us more of a ground to stand on to say we are just trying to respect national and state laws. That’s really the bar that makes most sense right now.”

Yanklowitz said that 40 compliance officers have been trained to visit restaurants with the seal so that they could check on them. The frequency of inspections varies from monthly to once every two or three months. Employees are interviewed confidentially, and often the financial records are checked. In the past year, only one establishment has had its seal revoked.

“They come in a lot,” said David Zakheim, 22, who works behind the counter at Café 76, a restaurant on the Upper West Side at the JCC in Manhattan, that serves sandwiches, wraps, smoothies and shakes. “They usually ask me how things are going with the boss, if they’re treating us well, if they’re paying us for overtime.”

The visits are central to the Tav HaYosher’s effectiveness. “One can’t evaluate a restaurant’s employee treatment by appearance; this is precisely why our certification is so important,” said Dani Passow, the chief compliance officer of Uri L’Tzedek.

And these inspectors are apparently trying to lead by example. “These guys won’t even take a drink when I offer it to them,” said Shlomi Levi, the owner of Soom Soom, which has been in business for seven months. “They always insist on paying.”

Yanklowitz admitted that for most of the owners who get the seal, the main motivation is their own business interests. Only a few, he said, contact him because they care about the ethical implications. But as the three owners who spoke to the Forward attested, even as a business move, making changes to meet the labor demands has paid off. All three said that they had been contacted by synagogues and Jewish organizations who want to deal only with food vendors who have been certified. Yanklowitz specifically cited the example of American Jewish World Service, which told the Forward that it seeks out and prefers to work with restaurants that carry the seal.

“As someone who eats at kosher restaurants, I like to see that in addition to the food being kosher, that the way in which they conduct business meets similarly high standards, in terms of how they treat their employees,” said Zach Cohen, 19, a freshman at Columbia University who was eating lunch at Café Nana in Manhattan.

The owner of Café Nana is Bella Alayof, a feisty Israeli woman. She was happy that Tav HaYosher gave her customers — mostly Jewish students from Columbia — an added incentive to come to her restaurant. But she also questioned whether labor laws, which mostly affect non-Jews, should be such a central concern.

“I think there are more important directions,” Alayof said. “There are so many poor Jews, homeless even. Why not help them first before you help everyone else?”

Yanklowitz said it’s a question he often hears, and he has an answer. “Communities have to identify their unique power and capitalize on those opportunities to create change,” he said. “In the Orthodox communities, we completely control these kosher establishments and have the opportunity to affect the lives of those most vulnerable people who work there.”