Where Seder Ends With ‘Check, Please’ 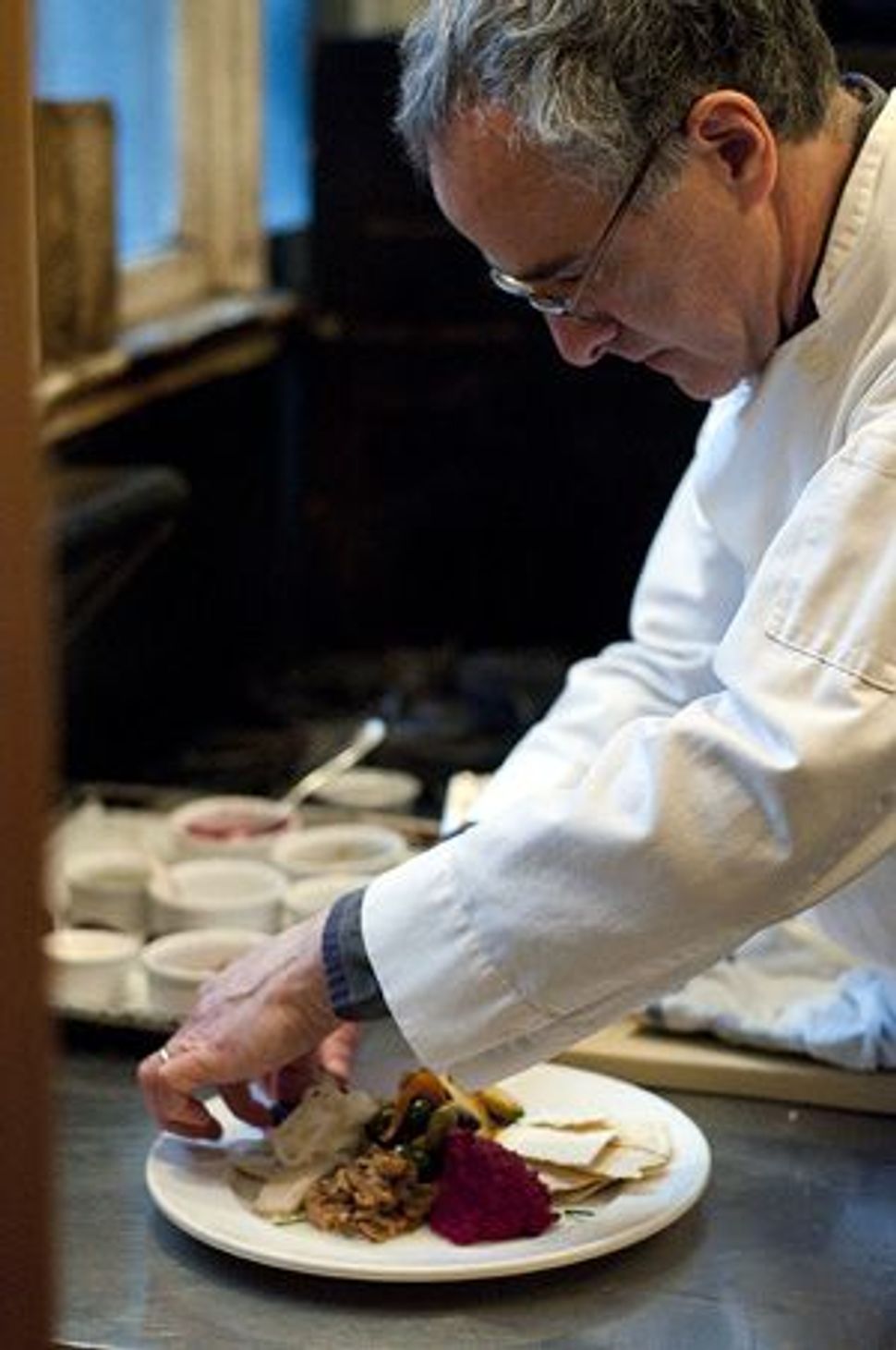 A Seder in a restaurant? To many, that would be unimaginable, because the event is normally synonymous with the hospitality of a Jewish home. Of course, synagogues and catering halls have long offered communal Seders to all comers, and ecumenical and “theme” Seders now abound — even at the Obama White House, to the tune of the generic Maxwell House Haggadah. 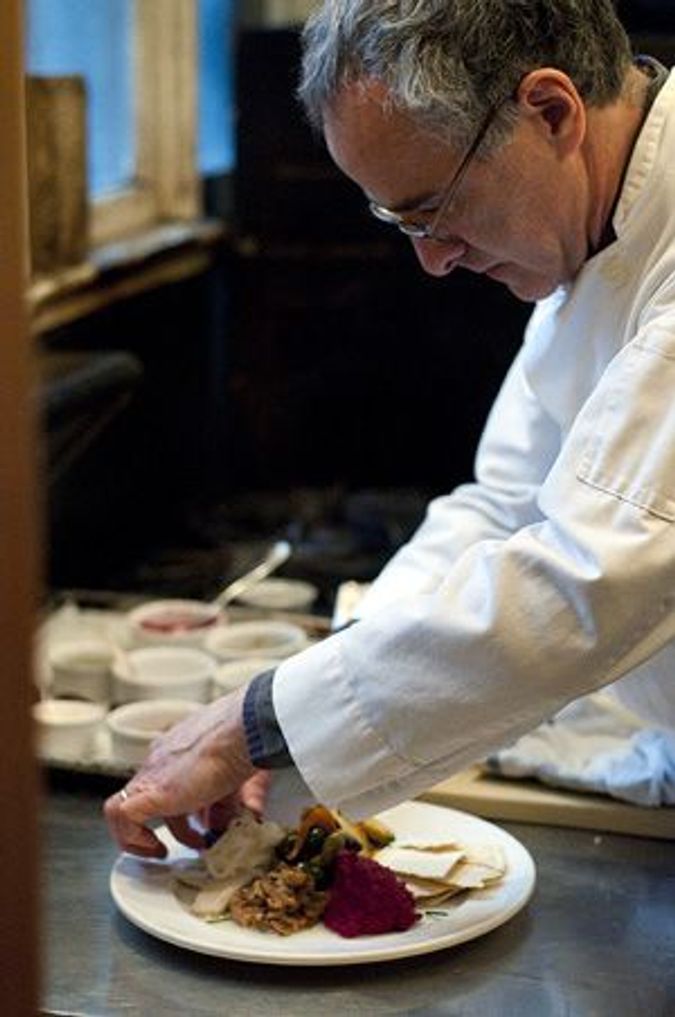 Yet, relatively few chef-centered, tablecloth restaurants have taken the Passover plunge, though they have customarily served Thanksgiving turkey to singles, travelers and exhausted homemakers alike. There are exceptions: In Los Angeles, Wolfgang Puck’s flagship, Spago, started hosting Seders 26 years ago — his gefilte fish had chives, shallots and cayenne pepper — and the Beverly Hills incarnation continues the tradition as a charity event. Some may be surprised that the upscale Rosa Mexicano, best known for its table-assembled guacamole, also welcomes celebrants by offering a Mexican Passover plate at its nine national locations. Called Passover a la Mexicana, the event offers dishes like tropical haroset and red snapper gefilte fish. Patrons can even request an additional Seder plate upon making a reservation.

But the East Coast’s most thoughtful, palate-centered restaurant Seder is almost certain to be found at Manhattan’s properly praised Savoy.

Twenty years ago, Peter Hoffman and his wife, pastry chef Susan Rosenfeld, opened Savoy at the site of a former coffee shop on the then-dingy corner of Crosby and Prince streets in SoHo. Hoffman, who has long favored foodways of the Mediterranean, has since garnered constant accolades from critics and the growing number of customers who champion small-scale, sustainable farming and husbandry. (The chef’s morning trips to the Union Square Greenmarket on his custom-built bicycle to buy garlic scapes or salsify have been much touted.) At a table in front of a fireplace on Savoy’s second floor, I asked Hoffman when and how Savoy’s Seders started.

In the restaurant’s first few years, he explained, he couldn’t afford to shut his doors for any reason, but Passover was a holiday he wanted to celebrate. “There was another Jew in the kitchen,” he said, “so we bought a box of matzos, and I said I’d make a little haroset.” That unusual staff meal “was the shortest Seder ever,” but after two years of closet ceremonies, Hoffman realized that he could bring the Passover narrative to diners. The big question was what to serve.

Hoffman shied away from ordinary “matzo ball” Seders, and he rejected, he said, “the foie gras fancifying” that is expected of high-rent chefs. He recalled that as a young man biking through France, he’d been invited to a family Seder in Aix-en-Provence: “It was the first time I had haroset not made with apples but with dates, and cilantro was the greens.” So he decided to explore the food of Mediterranean Jews, “which mostly means Sephardic Jews.”

For recipes and inspiration, the chef turned to cookbooks: Claudia Roden’s “The Book of Jewish Food,” Copeland Marks’s “Sephardic Cooking” and Edda Servi Machlin’s “The Classic Cuisine of the Italian Jews.” Later came more difficult finds, such as Nicholas Stavroulakis’s “The Cookbook of the Jews of Greece.” In the process of creating menus, Hoffman learned to use unfamiliar ingredients, like dried pomegranate and dried lime. Some of the Seder dishes even turned up later on Savoy’s regular seasonal menus.

The first Savoy Seder, in 1993, was a success, Hoffman said, and the event now attracts both new and regular patrons, Jews and non-Jews, the food fascinated and the just curious. He later focused a particular year on a single national tradition — 2009 was Syrian, including grass-fed beef kibbe with ramps and sumac, and potato and egg salad. This year’s feast, however, served on the evenings of March 29 and March 30, will feature Central Asian Jewish recipes. Dishes available will include stuffed grape leaves with lamb; yellow split peas; currants and dried lime; chopped liver with potatoes, eggs and caraway; and eggplant puree with salt and garlic.

Hoffman himself conducts the nonkosher, communal-table Seder — really Seders, one on the first floor and another on the second, staggered. Each Seder will include a 30-minute reading from the Haggadah and will be read mostly in English (save the prayers). Hoffman will hop back and forth between them, using a “liberation” Haggadah.

Of his religious upbringing, Hoffman said: “I was raised as an atheist and never went to temple. But Passover was a holiday that was important in our family. It’s a telling of the story of our history, not our piety.”

For this wry and serious chef, a good part of that story is told through his food.

Writer and editor Jeff Weinstein, for more than 15 years the restaurant critic for Village Voice, covers cultural and gay issues at www.artsjournal.com/outthere

1. In a large bowl, plump the currants in the wine, and set aside for 30 minutes.

2. Add the dates to currants.

3. Toast the nuts, and grind them in a food processor until fine. Add to the fruit, then add the spices.

4. Stir well, adding a little more wine if the mixture feels too stiff.

Make this with a mortar and pestle or a food processor.

1. Begin with the seeds, then add garlic, seeded jalapeños and finally cilantro.

2. Season and emulsify slightly with the oil.

“Traditionally,” Hoffman said, “zhoug is eaten on bread, but we love to use it as a sauce for fish, either accompanying a piece of grilled fish or drizzled into broth brimming with spring vegetables and gently poached fish. Not bad on steak, too. It’s salsa verde in overdrive.”

Where Seder Ends With ‘Check, Please’