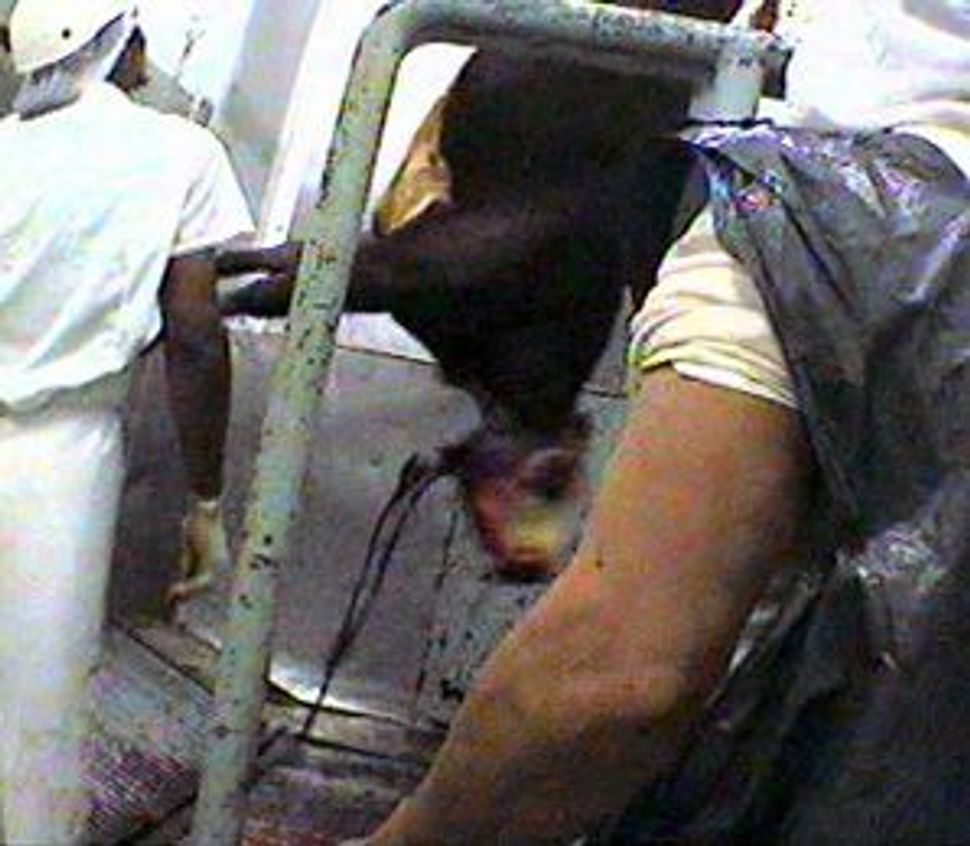 Over the past few decades, kosher meat producers have learned what many others in the industry know: The broad expanses of rural Argentina and Uruguay have everything needed to make great beef, with a stable climate and seemingly endless pastures for grazing. The labor is cheap, and the open pastures on which the cows are raised mean that much of the meat can be marketed with those increasingly alluring tags of “natural” and “free range.” 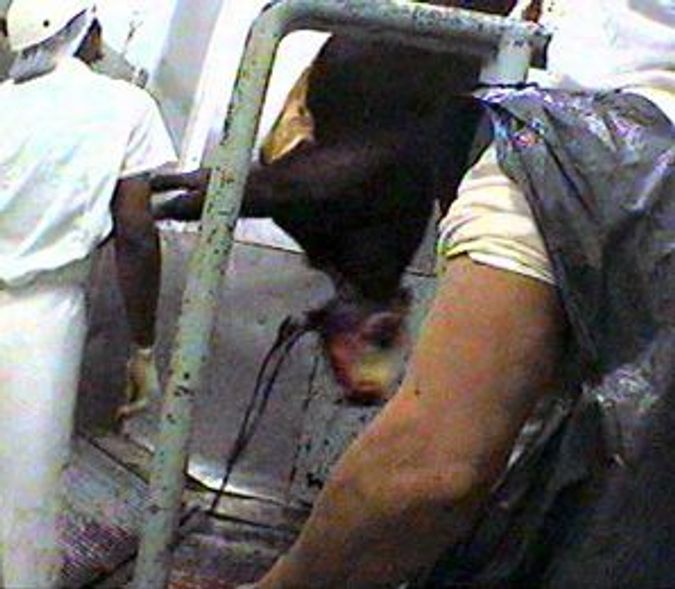 As a result, a majority of Israel’s beef — and a large portion of America’s kosher meat — now comes from South America. In recent years, every major American kosher meat producer has set up a South American operation.

There is just one, big problem: the way the animals are killed. A majority of the South American slaughterhouses producing kosher meat use a method known as “shackle and hoist,” whereby the cow is pulled up into the air by one of its hind legs and then dropped onto the ground before its throat is slit. The method is illegal under most conditions in the United States, but remains popular among kosher producers elsewhere because it allows the cow to be upside down when it is slaughtered — as is required by Israel’s chief rabbis, the final authorities on kosher meat entering the Jewish state.

The method will be given a public airing this week with the release of a video taken by the animal rights group People for the Ethical Treatment of Animals. According to exclusive information given to the Forward, the video was shot in late October 2007 by an undercover investigator during two days of kosher slaughter at a plant in Uruguay. PETA has not yet released the video, but a copy was given to the Forward, which has been investigating the practice since last fall. In it, the animals can be seen hanging from a single leg, struggling in the air and bellowing. Once the animal is put on the ground, it is shown writhing and being restrained by multiple workers who step on it and prod it before the cut.

“It is in a category by itself for badness,” said Temple Grandin, an American animal rights expert who has advised many kosher meat companies, referring to “shackle and hoist.”

“It’s cruel to the animals and it’s dangerous for the employees,” Grandin added.

PETA raised controversy in the past with undercover videos from kosher plants, sparking some to accuse it of anti-Jewish bias — a charge PETA has denied. In this case, PETA appears to have come to an issue already being pursued behind closed doors by certain kosher authorities. Over the last year, the Forward has learned, America’s largest kosher supervision agency, the Orthodox Union, has been concerned enough about “shackle and hoist” slaughter to begin a quiet campaign to have the Israeli rabbinical authorities change it.

“It’s not the kind of system that we want to have, that we would be proud of,” Rabbi Menachem Genack, the CEO of the Orthodox Union’s Kosher Division, told the Forward.

The Rabbinical Assembly of Conservative Judaism passed a ruling in 2000 calling the “shackle and hoist” method a “violation of Jewish law.” In anticipation of the new revelations, the organization reiterated its opposition at a meeting earlier this week.

The plant shown in the PETA video is located in Uruguay’s capital, Montevideo. According to Orthodox Union authorities, the kosher plant in question produces meat for Israel. The Orthodox Union’s top expert on South American meat, Rabbi Seth Mandel, says that even within the problematic realm of “shackle and hoist,” the new video shows an unusually bad case.

“Not only is it unusual — this would not be allowed to go on in plants [slaughtering] for the U.S.,” said Mandel.

Despite the concerns of the Orthodox Union, the organization still certifies kosher plants in South America that use “shackle and hoist”; indeed most kosher meat entering the United States from South America is produced using the method, according to Genack. Genack said change has been slow to come because the Israelis are the major market force in South America and thus dictate the standards of meat production in the region.

“This will not succeed unless we have the support of the Israeli companies, and that requires a push from the chief rabbis there,” Genack said.

The willingness of the Orthodox Union to continue to allow “shackle and hoist” has already drawn fire from PETA.

“I think it’s shameful,” said Aaron Gross, a PETA consultant who has worked on the organization’s projects involving kosher slaughter. “Anything they’ve been doing to improve the situation, I applaud. I just wish they would do it more publicly.”

Over the last year, Genack said, he has had numerous private talks about this issue with both Rabbi Yona Metzger, the Ashkenazi chief rabbi of Israel, and Rabbi Shlomo Amar, the Sephardic chief rabbi. In late 2007, Metzger and Amar convened a meeting of rabbis in Israel to discuss the issue, according to people involved. Afterward, Genack said he received a letter in which he was assured that the Israeli chief rabbis were looking to change the practice. Just last week, Genack said he spoke with Metzger on the phone about pushing for change.

Partially at Genack’s insistence, the chief rabbis invited a veterinarian who specializes in kosher slaughter, Rabbi I.M. Levinger, to attend their meeting last fall. Levinger told the Forward that the issue was discussed, but that the chief rabbis were hesitant to commit to anything.

“They want to see what they can reach with recommendations,” Levinger said. “I feel that this will not be much, I am afraid.”

Rabbinical authorities say that the chief rabbis mandate that cows be upside down because the blood drains faster and the animal cannot fall on the knife.

The current PETA campaign builds on the publicity the group garnered with an undercover video released in 2004 from America’s largest kosher slaughterhouse, AgriProcessors, which is located in Iowa. AgriProcessors is the only kosher meat producer in America that is certified to export meat to Israel. The company uses what is known as a rotating pen to meet the Israeli standard that the animal be upside down when it is slaughtered.

AgriProcessors’ use of the rotating pen was criticized in 2005. Ironically, it is the rotating pen — a mechanized corral that holds the animal while it is flipped over — that many animal rights activists see as the best alternative to the “shackle and hoist” method in South America. In fact, in South America, AgriProcessors has led the way, being the first and only kosher company to install a rotating pen in its slaughterhouse, according to the Orthodox Union. This has earned it praise from PETA.

“I think it’s great that AgriProcessors has taken that step,” said PETA’s Gross. “It shows you how bringing this stuff out in the open motivates change.” AgriProcessors did not respond to requests for comment.

The kosher rush into South America began in 1950, according to the Israeli chief rabbinate. Today, close to 60,000 tons of meat come into Israel each year from South America.

South America’s biggest draw is its cheap labor, which is also a primary reason that companies opt for the “shackle and hoist” method. The technique relies on little technology but a comparatively large number of laborers to restrain the cattle.

Most American companies use their South American product for processed meats like salami and bologna — a choice driven in part because the cows are raised on grass, which does not make the meat as fatty as corn-fed American beef. Recently, though, grass-fed beef has taken on its own allure with the explosion of demand for free-range meat. Both kosher authorities and animal rights activists say that before the slaughtering begins, conditions in South America make for more pleasant living conditions than in America, where most cattle are confined to feed lots for their entire lives.

“In Uruguay, the animals are blessed,” said Mandel, the rabbi who oversees meat production in South America. “They are lolling outside — plenty of grass to eat. There is nothing to mistreat them — until the day they are loaded on a truck.”

That final step — the “shackle and hoist” — was common in America in the early 20th century, when labor was cheaper and before Congress passed the Humane Methods of Livestock Slaughter Act.

The Israeli animal rights group, Concern for Helping Animals in Israel, has recently written to both chief rabbis questioning whether the South American practice could be compatible with Jewish law.

The letter, which was written by Rabbi Adam Frank, an activist with the organization, asked: “Since less painful and more humane methods of animal restraint and treatment exist and are used in the kosher slaughter process, is the Shackling & Hoisting of a conscious animal an unnecessarily cruel practice, thus defining it as prohibited under Jewish law?”

Officials with Frank’s organization said they have not heard back from the chief rabbinate.