A New Story and Better Understanding Between Israelis and Palestinians 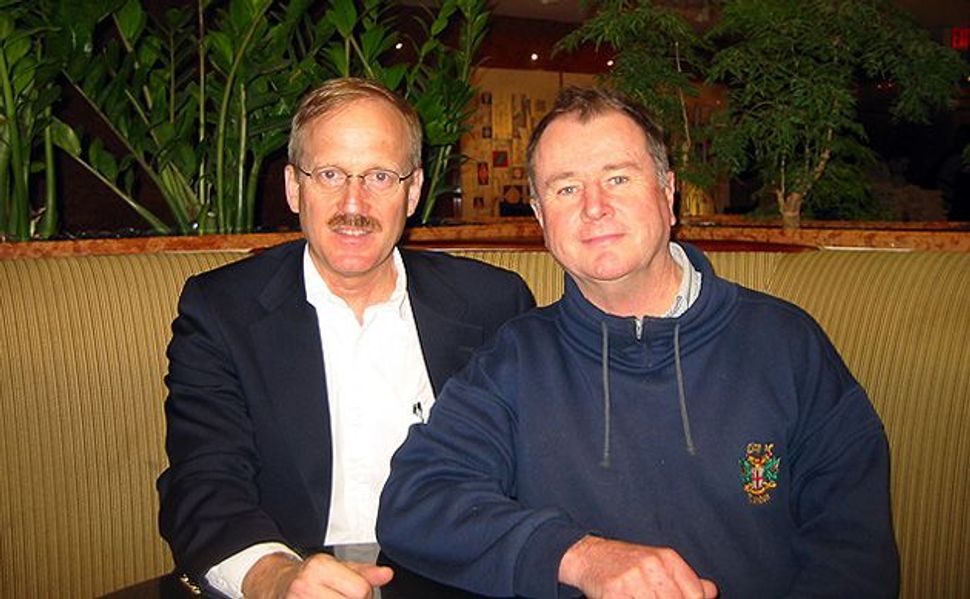 This summer, young Israeli and Palestinian leaders will travel to Washington to live together and learn from each other, in hopes of creating a new narrative for the possibilities for peace in the Middle East.

They’ll be taking part in New Story Leadership, a program that takes 20- to 25-year-old Israeli and Palestinian college students out of the physical and emotional context of the Middle East and gives them the tools to create a new story of possibility for their region. NSL is modeled after programs that worked previously with young adults from other hot spots — Ireland and South Africa.

Paul Costello, president, CEO and founding director, is a proponent of the narrative method, which is based on the concept that people “live” inside stories that give meaning to life and shape to their actions.

“The future will be a repeat of the past,” Costello said, “unless we find a new story.”

The goal of NSL is to spark creation of that new story for the next generation of leaders and to expand these college students’ sense of possibility. “In Northern Ireland, we went in thinking it’s all about the Protestants and Catholics hating each other for thousands of years, but we came to realize that 22-year-olds care less about that and more about their future,” he said. “In conflict regions, the focus is usually on healing old wounds, but in the end it’s the future that’s most at stake for the younger generation.”

can look at the conflict in their region in a different way and see their future from a new angle. That’s why the linchpin of the program lies in bringing students to the United States. “There is great, great value in taking them out of their homeland for a time,” he said.

While in Washington, the students will have internships in Congress, The World Bank, think tanks and similar institutions. They’ll live in pairs — an Israeli and a Palestinian — with a host family. Their eight-week curriculum on leadership will conclude with a formal presentation to a Washington audience that is invested in the issue and engages with Middle East decision makers. And when they’re finished, they will become part of an active network of alumni graduates.

Fadi Elsalameen a consultant to NSL and a Palestinian graduate of Seeds of Peace, a cultural exchange program for teenagers in conflict countries, , said that joining Israelis in an international program was transformative for him. “Your whole perception of the enemy changes,” he said. “You start seeing people as normal, as friends, as people. You can relate to each other.”

“There’s an enormous Israeli-Palestinian effort on the ground here, a Middle East industry with forums, programs and players,” Costello said of civic life in Washington. “But something is missing, and that is the Israelis and Palestinians themselves. How can Washington make the best decisions if it’s not hearing the voices of the young people whose future is most affected by those decisions?”

Shai Tamari, a native Israeli who is a legislative assistant on foreign affairs to Rep. James P. Moran, a Virginia Democrat, said that many legislative assistants have never met an Israeli or Palestinian, yet they help draft foreign policy legislation. “Having congressional staff work with people from the region will be beneficial not only to interns, but also to members and staff,” he said.

NSL is not-for-profit and nonpartisan, and doesn’t work toward any particular political solution. Instead, Robison said, he expects the young Israeli and Palestinian students to bond with each other in a way they couldn’t at home and to experience the rich complexity of American life.

To Costello and Robison, the unique quality of American life is its unfailing optimism about the future. “It is so unlike any other place in the world,” Costello said. “It is the key ingredient you can only get if you come here.”

“Israeli and Palestinian students will see up close what all immigrants to this country see,” Robison said, “namely, that we’ve built a remarkably peaceful and productive civil society by cooperating with each other. It hasn’t been easy, and it didn’t happen overnight, but it’s the lesson I want them to take home.”

The first group will come this summer, the number depending on funding. The cost is roughly $15,000 per student for six months. Eight families are on board as hosts.

NSL will be a long-term, ongoing project with no expectations that change will happen quickly. “It will take a patient and persevering investment in this younger generation and mentoring them into a cohort of mature leaders willing to serve their communities on the ground,” Costello said.

The Washington Ireland Program, which was started in 1995, has more than 400 graduates working across Irish society; the South African Washington Intern Program, founded in 2006, has 25 graduates. The lessons learned from both programs define NSL: Focus the work on young adults; emphasize the future over the past; make America, not the Middle East, the focal point of the experience, and bring those voices into the Washington-American conversation about the region’s future.

“We’re not trying to solve the conundrums of history,” Costello said, “but we refuse to let conflict define lives. New Story Leadership will open doors to a future that’s bigger than the present conflict for the next generation of Middle East leaders.”

A New Story and Better Understanding Between Israelis and Palestinians