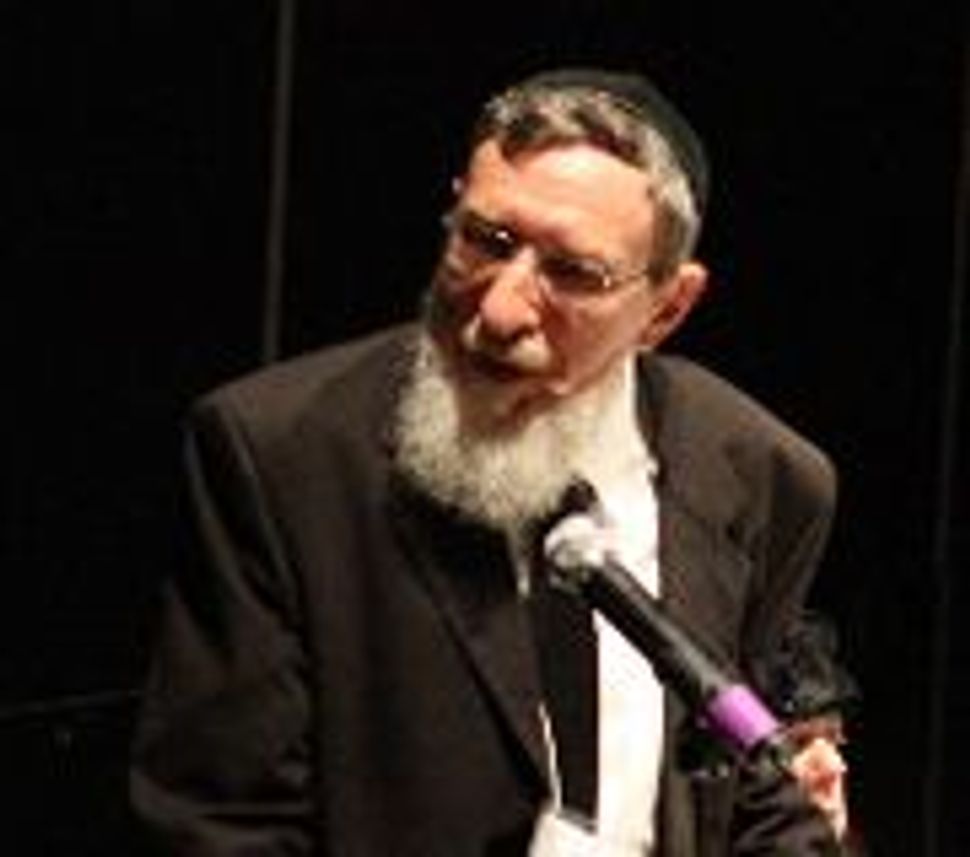 The battle over whether women may serve in rabbinic roles in Orthodox synagogues, and if so, what these women should be called, dominated the recent Jewish Orthodox Feminist Alliance conference — where many speakers predicted that female clergy members would become increasingly common at Orthodox institutions. 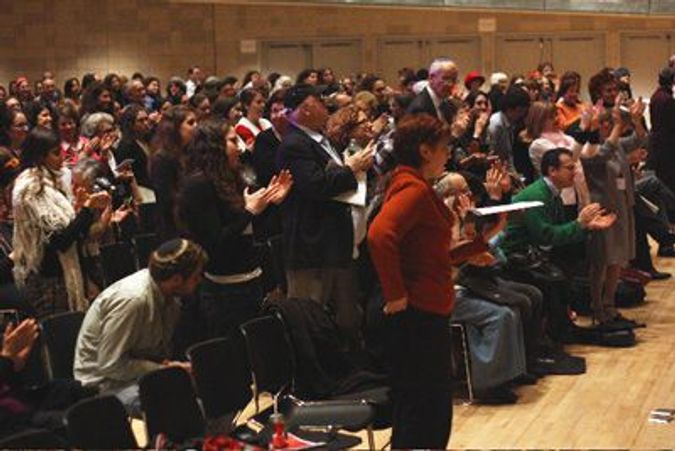 Respect: The audience rises to its feet as Sara Hurwitz delivers the plenary speech at JOFA. Image by JOFA

“The community is inspired, electrified and supportive of women functioning in rabbinic roles,” said Rabba Sara Hurwitz, who gave a plenary speech at a JOFA gathering that took place March 13 and 14 on the Columbia University campus in Upper Manhattan. “Although the recent publicity has been difficult, it has also given women — many who have called me — permission to stand up and vocalize their dreams of becoming Orthodox clergy.”

The controversy over women’s leadership roles was further stoked when Hurwitz’s mentor, Rabbi Avi Weiss, changed her title from “Maharat,” which he gave her a year ago, to “Rabba” in an effort to reflect her standing as a member of his synagogue’s rabbinic staff. But in response to pressure from the centrist Orthodox umbrella group, the Rabbinical Council of America, and the Haredi Agudath Israel of America, in early March, Weiss reversed his decision to use the title “Rabba” or the term “ordination” for graduates of Yeshivat Maharat. The New York seminary, now in its maiden year, has four students; Hurwitz serves as its dean.

After Weiss negotiated with the RCA in a carefully worded settlement that was made public March 5, Rabbi Steven Pruzansky, an RCA member from Teaneck, N.J., threw more fuel onto the fire when he compared the idea of “female clergy” to “pagan ideologies.” 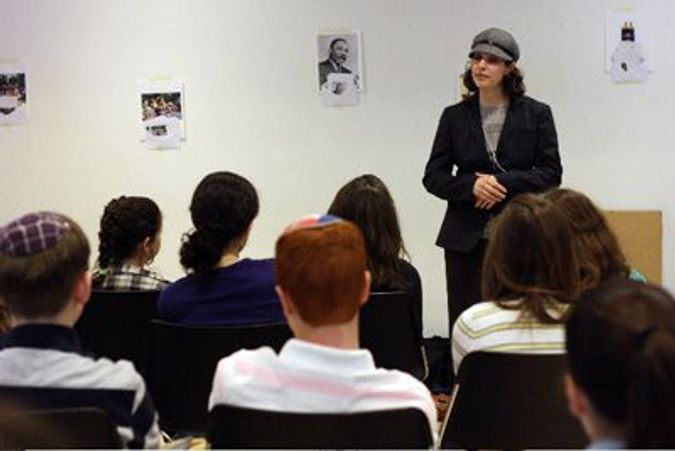 Even some of those who support Weiss’s efforts to propel more women into the Orthodox clergy are criticizing the way he handled the title change to “Rabba” from “Maharat.”

“It was a political error on the part of Rabbi Weiss,” Rabbi Daniel Sperber, president of Bar-Ilan University’s Institute for Advanced Torah Studies and a signatory of Hurwitz’s ordination document, said in an interview. “The title is too close to ‘rabbi.’ Had he left it at ‘Maharat,’ I don’t think it would have turned into a cause célèbre.”

Sperber says there is no basis in Jewish law for prohibiting women from becoming rabbis. “Others will come after [Hurwitz],” he told the Forward. “With patience, it’s very possible that this type of leadership will proliferate. As it does, it will be accepted by default.”

When Hurwitz rose to speak at the JOFA plenary, everyone in the crowded auditorium stood, in an Orthodox custom of respect generally reserved for rabbis. When she finished her talk, attendees gave her a standing ovation.

In conference sessions, there was also palpable, if muted, anger about the issue of agunot, or women chained to estranged husbands unwilling to grant them a religious divorce. “Not only are we powerless to make change, we cannot even get the rabbis to come together to discuss change,” JOFA President Carol Kaufman Newman said. “The very word [change] causes the onset of a disease one of our board members, a physician, calls Cervical Spine Disease — twisting the neck and looking over the shoulder to see what others will say or think about what they may wish to do.”

But few people spoke as bluntly as Newman did. DeDe Jacobs Komisar, 26, a Yale School of Drama student who attended the event with her husband, Rabbi Yaakov Komisar — a translator of Rabbi Adin Steinsaltz’s works — and their 7-week-old son, said that conference-goers “are trying to avoid anger so they’re not written off as a bunch of angry feminists.”

The conference program also included sessions on ritual, theology, education and social activism. There was one on “Feminism for Men” and another on “Being Gay and Lesbian in the Orthodox World.”

“In Orthodoxy, we’re at a crossroads, and just beginning to take these issues seriously,” Jacobs Komisar said. 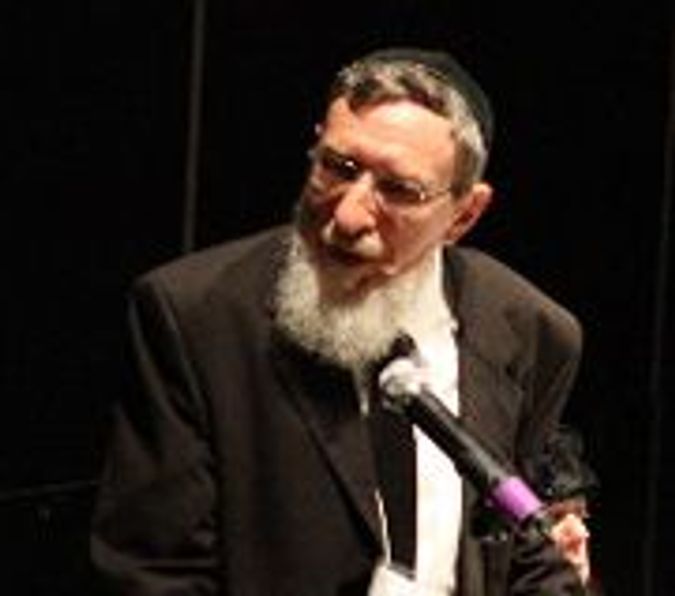 The conference’s headlining speakers kept their focus on the future.

“Forward motion is about education,” said Dina Najman, who, as spiritual leader of Manhattan’s congregation Kehilat Orach Eliezer, is called rosh kehilah, or community head. Najman, Hurwitz and Rachel Kohl Finegold, who serves as programming and ritual director at Anshe Sholom B’nai Israel Congregation in Chicago, spoke at a session titled “A Rabbi by Any Other Name.”

The conference was the seventh for JOFA, which was born out of the first International Conference on Feminism and Orthodoxy. That initial conference was started by the prominent Orthodox feminist Blu Greenberg and a handful of likeminded women in 1997. At that first event, organizers expected 400 people, but some 1,100 showed up. Another conference was held the following year, and since then they have been held every couple of years. This year’s event brought together more than 1,000 people.

At first, almost all JOFA attendees were women, the majority of them middle-aged or older. But over time, that has shifted. This year, many men and young people attended. In advance of the gathering, the organization ran focus groups to solicit their members’ programming input, and used social networks such as Facebook to reach out to would-be conference-goers. Eighteen college students attended a Sabbath seminar at Weiss’s synagogue, the Hebrew Institute of Riverdale, and there was a separate conference track for middle school students.

While some at the conference dismissed the “Rabba” title controversy as merely semantic, the women who already occupy the role were well aware of the power of titles.

Last year, when Hurwitz was ordained and joined Rabbi Steven Exler as a co-assistant rabbi at Weiss’s synagogue, “we quietly campaigned to have both of our names announced with our titles,” Hurwitz said. “Rhetoric and semantics allowed us to shape the community so they could see me in a leadership role.”

Kohl Finegold said, “My title does not make it clear I’m a member of the clergy,” but that nevertheless, “the softness of the title allows the evolution to continue. The fact that we all have different titles means the conversation is continuing.”

And it will continue next month at the RCA’s annual conference, where, according to Rabbi Shmuel Goldin, the RCA’s first vice president, the topic of Orthodox women in religious leadership will be a central focus. “This prominently made the grade as a critical issue to have on the program,” Goldin said.