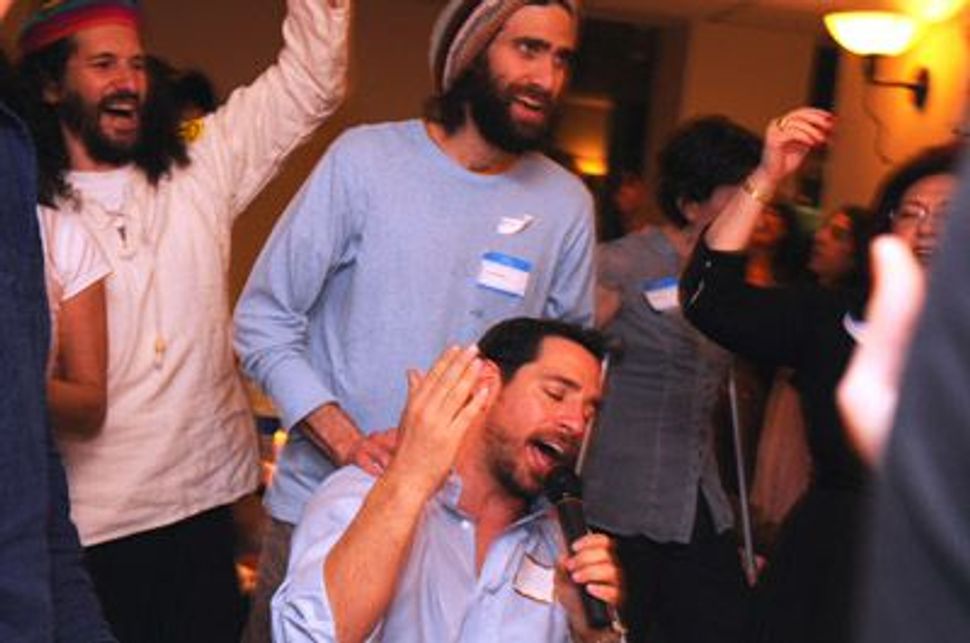 Everything Is in Order: Rabbi David Ingber leads a Passover Seder. Image by MELANIE EINzIG/WWW.EINzIGPHOTOS.COM 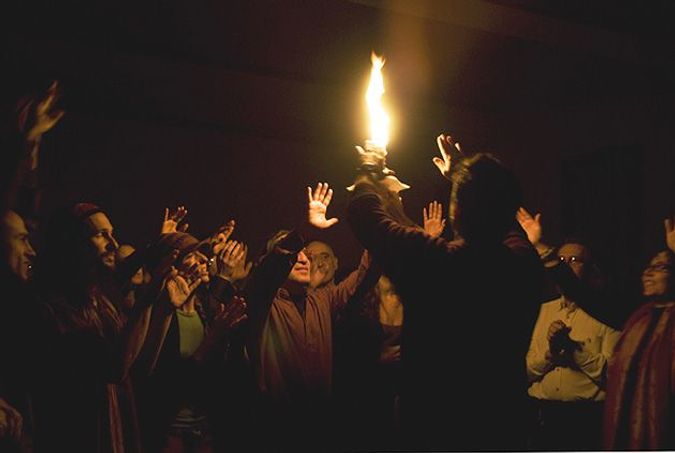 Renewing: Rabbi David Ingber of Manhattan?s Romemu synagogue leads the Havdalah service at the conclusion of the Sabbath. Image by MELANIE EINZIG/WWW.EINZIGPHOTOS.COM

The denominations that make up mainstream American Judaism — Orthodox, Conservative, Reform, Reconstructionist — all seem to be struggling with organizational issues while clinging fiercely to their separate identities. But not Jewish Renewal, a small movement based on the teachings of Reb Zalman Schachter-Shalomi. Renewal is facing the exact opposite problem: It is struggling to mature as a movement without becoming a denomination.

Renewal now has an umbrella organization, ALEPH: Alliance for Jewish Renewal, that holds a biannual kallah, or gathering, for lay members and clergy. ALEPH also offers a full range of resources for Renewal Jews, including trips to Israel for young adults, social justice initiatives, spiritual retreats and a library’s worth of books and guides.

While at first, Renewal did not ordain its own rabbis — they came from other denominations or were ordained directly by Schachter-Shalomi — ALEPH has begun its own rabbinical and cantorial program under Jack Kessler, and a separate program for rabbinic pastors (chaplains), run by Shulamit Fagan. Renewal clergy now also have their own association, Ohalah, which meets annually. There is little doubt, in other words, that Renewal has all the trappings of a denomination. Yet a denomination is precisely what Renewal refuses to be.

“When you are looking at things from the bottom up, then you say, well, it’s an organization like all organizations; it’s a 501(c)(3), they have a board, they have this, they have that; it looks like a denomination,” said Schachter-Shalomi, the bearded ex-Lubavitcher whose writings are considered almost sacred Scripture by his followers. “If you look from on top, however, you see something else. You see us as being — how do I say it? — the starter dough for the rest of Judaism. The rest of them will get it. What is good will be copied. What is not good won’t be copied.”

Ask Renewal clergy why they don’t want to belong to a “denomination,” and you will get many different answers, distilled to one point: a deep fear that fixing belief and practice would empty out all the passion and emotion they try to infuse into Jewish spiritual life. “At a denominational rabbinic school, you spend a lot of time with people who think the same way. The homogeneity can be stifling,” said Ohalah board member Howard Cohen. The association recently met in St. Louis.

Yet Renewal practices its own form of homogeneity. Though the movement welcomes Orthodox rabbis into the fold, as a group, the Renewalists support and uphold practices that would be anathema to any type of Orthodox rabbi, from Baal Shem Tov Hasidim to even egalitarian Modern Orthodox. For instance, when asked pointedly about Halacha, or Jewish law, Praeger, leader of the Renewal rabbinics program, avoids the question, suggesting that Halacha can be stifling if decisions are not specific to context: “We like to say that whether a chicken is kosher or not is not about the chicken, but about who is asking. Our rabbis are not halachic recording machines.” Renewal rabbis are joined not by a common theology, but by a common approach to spiritual practice. “What we want from our rabbis,” Praeger said, “is the capacity to be radically present and to use all of their skills to work productively, creatively, compassionately with what is before them.” 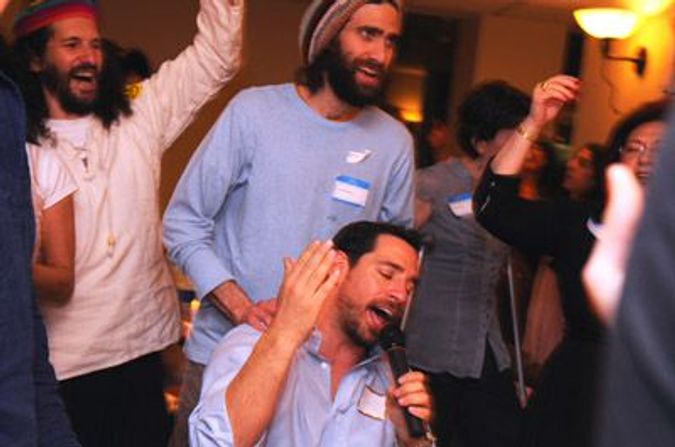 Everything Is in Order: Rabbi David Ingber leads a Passover Seder. Image by MELANIE EINzIG/WWW.EINzIGPHOTOS.COM

ALEPH’s executive director, Debra Kolodny, echoed Praeger when she said: “We are not defined by any particular Jewish practice; we’re defined by values and practices that lead us to a direct experience of God.” For Renewalists, the point is not common practices or even values (which they refuse to define), but the common belief that what matters most to religious practice is the “direct experience of God.” Indeed, Renewalists like Praeger and Kolodny can often sound more like Progressive Christians than like traditional Jews in their desire to fill old jars with new wine. Yet, when asked about their divergence from core Jewish practices and beliefs, Renewalists will be quick to remind you that Renewal aims not to replace Jewish tradition, but to refresh it. “The aim of the Renewal movement,” Ohalah’s president, Rabbi Yocheved Mintz, said, “is to make new the old, and to make the new holy.” The Renewalists’ desire is not to replace Jewish practice, but to make it more “heart-centered.”

Renewal rabbis like to talk in terms of the kabbalistic “four worlds”: the physical, emotional, intellectual and spiritual. They often suggest that the other Progressive movements in Judaism that also have questioned traditional Halacha, particularly Reconstruction and Reform, have been too intellectual. I asked Renewal Rabbi Shefa Gold why she had left Reconstruction for Renewal. Renewal, she told me, “is creative — the R & D movement of Judaism. In Renewal I feel I have the freedom to experiment and explore…. I didn’t have to leave my body or the fullness of my passions and emotions.” For Gold, experimentation takes the form of chant: an entire service led by Gold may be taken up with one chant, based on liturgical text. For others in Renewal, a nonrational experience of God could lead to dance, drumming circles, meditation or yoga instead of to traditional liturgy.

Renewal traces its origins to the Baal Shem Tov, the founder of Hasidism, who stressed that halachic observance without heartfelt prayer was empty; to this day, Hasidim insist on attempting to attain a mystical oneness with God. Renewal aims to marry this aspect of Hasidut with the intellectual openness to modernity found in Reconstructionist and Reform to create a more spiritually alive Judaism. Renewalists fear that any attempt to codify what they see as a pr-eeminently personal search for a “heart-centered’ Judaism will lead to “homogeneity” and the collapse of the very practice they are working to build. Yet, the fact is that Renewalists all share precisely this belief in a heart-centered, “four worlds” spiritual practice. In other words, they are homogeneous in belief.

It’s also true that you know what sort of practice you will find in a Renewal synagogue: Whatever the clergy do, it’s going to be about opening your heart to God, and using innovative techniques to get you there. Some Renewalists use meditation, some use chant, some use Native American drum circles and others use Sufi dancing, but whatever form the worship takes, the experience will be physical.

Rabbi David Ingber, founder and spiritual director of Romemu, in New York, believes that Renewal’s refusal to declare itself a denomination causes problems: “Honestly, I think Renewal is a denomination but doesn’t admit it. Its own caution about being an authority or institution creates a whole slew of problems. People don’t know how to relate to it, what it stands for. Younger people think more concretely: They want to know what we stand for, what we do, what’s our position on conversion, on Shabbat, on mitzvot, on Halacha?” Ingber feels that Renewal should declare itself a denomination and set up a center for study — which he is doing right now, in New York.

While most Renewalists disagree with Ingber, some acknowledge that this is the direction in which Renewal is heading. The truth is, as Mintz admits, that “becoming part of the establishment is a reality of life.” If Renewal continues to develop institutions such as a rabbinic program, congregational affiliates and a youth program, it will look more and more like any other Progressive denomination. Given American Jews’ increasing rejection of denominations, I wonder if that is a good thing.