Forgetting About the Rest of the World 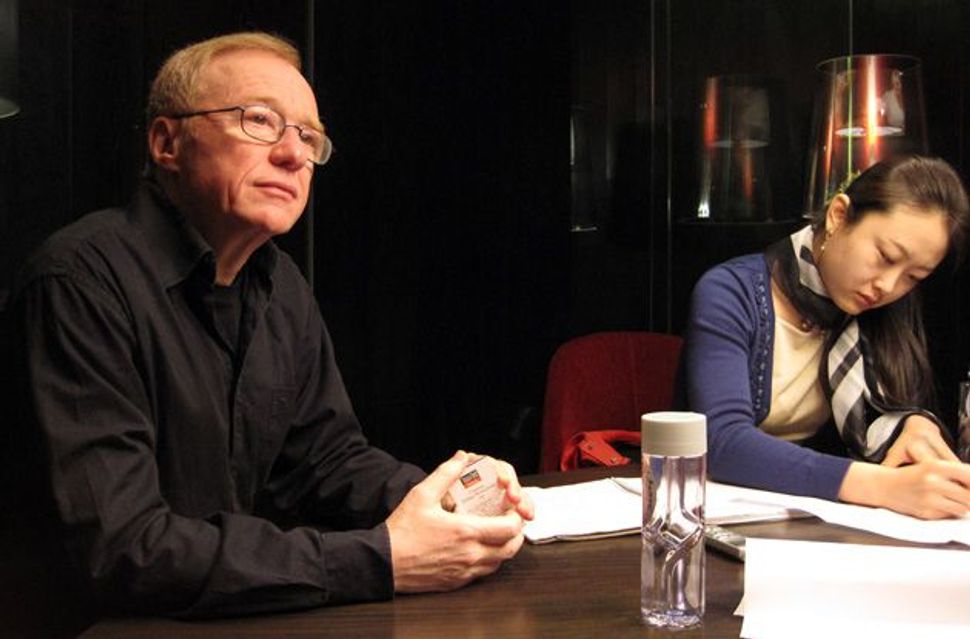 David Grossman is a leading Israeli novelist and an outspoken peace activist. His works have been translated into 25 languages, and his novels “An Intimate Grammar” and “See Under: Love” were named two of the most important books since the creation of the State of Israel by the Institute for the Translation of Hebrew Literature.

During the Second Lebanon War, in 2006, Grossman and fellow Israeli authors Amos Oz and A.B. Yehoshua publicly urged the government to agree to a cease-fire. A few days later, Grossman’s 20-year-old son, Uri, was killed in southern Lebanon during an Israel Defense Forces operation.

The 56-year-old author lives outside Jerusalem, but in March he traveled to China for the Beijing Bookworm International Literary Festival. He spoke with the Forward’s Alison Klayman about Israel’s small circle of political writers, the country’s growing interest in doing business with China and how being in China makes him forget that the rest of the world exists.

FORWARD: Is this your first trip to China?

GROSSMAN: Yes, and I’m really glad to be here. I think you cannot really be a person of this time, this period in the life of the world, without being in China.

You spent a few days around Shanghai before coming to Beijing. What are your impressions of China so far?

I’ll tell you something funny: Whenever I go abroad, to America or England or Europe, I always know that my reality at home is still there. I know that other realities continue to exist simultaneously. But when I am here, the totality of the China experience is so strong and so overwhelming; it is as if nothing else exists. Everything else seems quite pale, quite fading….

You were invited here for a literary festival. What is your view of literature in China, where certain books are banned and authors are silenced?

I think you can imagine what I think. Literature and art should be free. It’s the primal interest of humanity that artists be able to express their deepest layers and desires and passions and opinions without any censorship.

I know that within Chinese creative circles, there are artists who are more political who wish others would take a stronger stance on important issues. Is there a similar debate within artistic and literary circles in Israel?

I think sometimes there is a kind of optical mistake, and people outside of Israel believe that most Israeli writers and artists are political. It is absolutely not the case. Very few of us are voicing our opinions and criticizing openly. When it comes

to writers, it’s very few, but of course these are the people that are

well known. And by the way, there are wonderful writers who say, “I don’t want to pay the heavy price that it takes to be involved politically, and to be banned by large groups of people within Israel who will never read my books because they think I am too leftist.”

Have you always thought of yourself as a political writer?

Not at all. To me, the most interesting thing is really to document the inner life of the individual.

I was born to a conflict area, I was born to war. And exactly how I would describe my surroundings if I were born in China, this is what I do in Israel. You just try to understand the place of the individual in this really tormented situation, how one can maintain his uniqueness in a situation that really threatens to erase it. And how one can believe in life, and how you can raise children to believe in life.

Do you have any favorite Chinese authors?

I read several Chinese books, and the one I really like is Ah Cheng’s trilogy: “King of Chess,” “King of Children” and “King of Trees.” I read a book called “A Thousand Years of Good Prayers” by Yiyun Li, which I really liked. I also read “Chronicle of a Blood Merchant” [by Yu Hua], about a person who sells his blood.

Did you read them in Hebrew?

I read these in Hebrew, yes. There are now more and more translations to Hebrew of Chinese writing.

Do you see a growing interest in China within Israeli society?

I think mostly from the economic point of view. There is a deep appreciation of China as a growing, emerging power. More and more Israelis are turning themselves toward China, studying Chinese and wanting to do business with China. My son and his girlfriend are living here in Wuhan. She is from Kibbutz Tzuba in Israel and is studying Chinese here for a year. So when I got this invitation from the literary festival, it was a wonderful thing to come and see them.

What about China’s human rights record?

I know Israelis feel gratitude toward what China did for Jewish refugees during the Second World War, when China received so many thousands of refugees from the Nazis without asking them for a visa. And this is something you do not forget, when you talk about a time when most of humanity turned its back on you.

Alison Klayman is a freelance journalist and documentary filmmaker in Beijing.

Forgetting About the Rest of the World