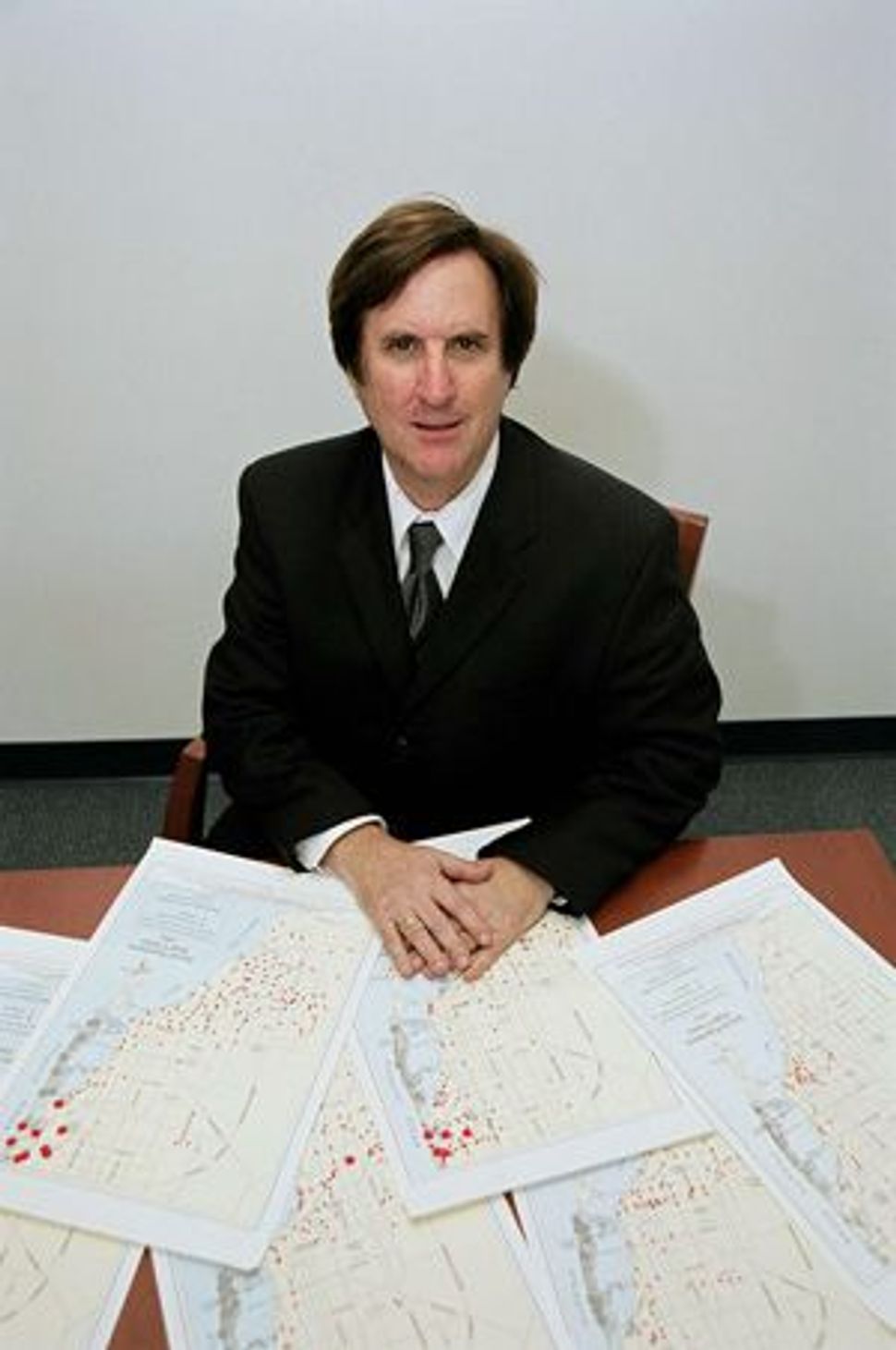 Data King: Ira Sheskin, a University of Miami geographer, has surveyed 21 Jewish communities. He has not been asked to share the numbers, but said he would decide ?on a case by case basis.? Image by COURTESY OF IRA SHESKIN

In the coming weeks, some 120 million Americans will fill out their U.S. Census forms, providing the government with information that will be used to track demographic trends and to direct funding where it’s needed. But this time, unlike during three of the last four decennial U.S. Census cycles, there will be no parallel nationwide Jewish survey. 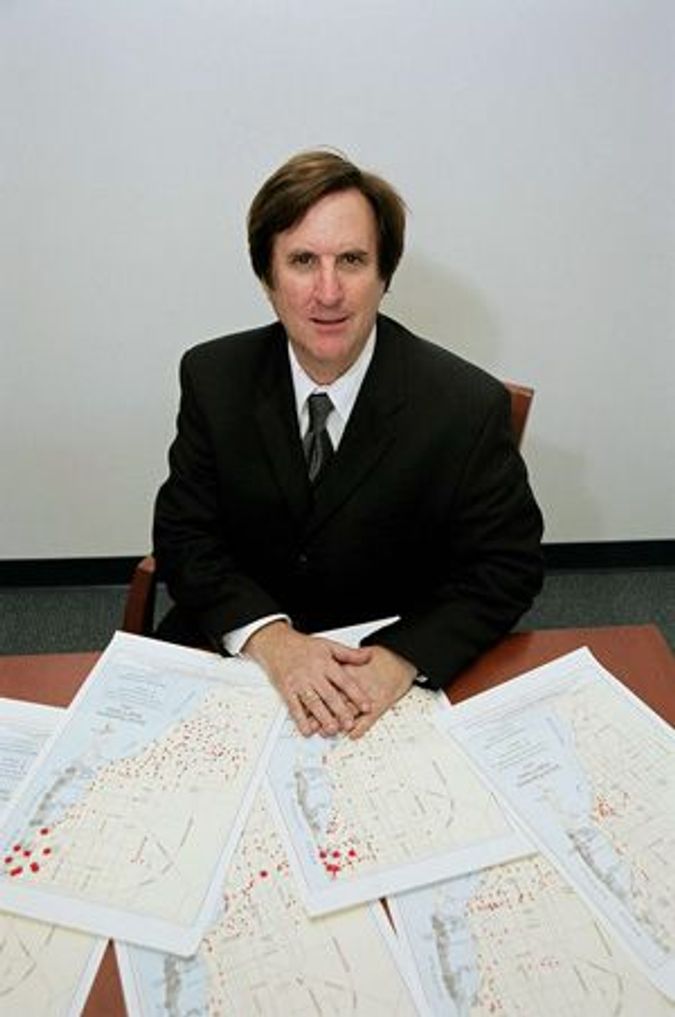 Data King: Ira Sheskin, a University of Miami geographer, has surveyed 21 Jewish communities. He has not been asked to share the numbers, but said he would decide ?on a case by case basis.? Image by COURTESY OF IRA SHESKIN

In 1970, 1990 and 2000 there were National Jewish Population Surveys, whose results shaped the decisions of funders, organizational leaders and communal policy planners and, at least in the case of the 1990 NJPS, led to a large-scale reframing of the Jewish agenda.

But this year there will be no survey to track where we’re moving, how we’re aging and faring economically, how we identify with Judaism, how we educate our children and how many of us are wedding people from other backgrounds.

“It’s painful,” said Jack Ukeles, president of the research firm Ukeles Associates. “It’s not good for the Jews not to have another NJPS.”

“We need the information,” echoed philanthropist Mandell Berman, who helped line up funders for the past two national surveys. He added that people who use surveys in the field had found them vital and continue to need them.

The previous decennial surveys were conducted under the auspices of the extant national umbrella body for Jewish community federations. The 2000-01 NJPS — which by some estimates cost nearly $6 million, far more than budgeted — was widely criticized, both for its findings and for its methodology. United Jewish Communities, the survey’s sponsor, announced afterward that it would not sponsor future national population surveys.

It is hard to overstate the impact of some of the previous national surveys. The 1990 NJPS finding of a 52% national Jewish intermarriage rate — later revised downward to 43% — sparked a massive overhaul of the Jewish communal agenda. It was a wake-up call to the organized Jewish community that intermarriage and assimilation were significantly changing the needs of American Jewry.

“Tens of millions of dollars were redirected toward Jewish identity building,” said Jeffrey Solomon, president of the Charles and Andrea Bronfman Philanthropies, which helped finance the 2000-01 NJPS. “By not doing a study now we don’t see what trends are emerging that could very possibly change priorities.”

About a year ago, Ukeles and Steven M. Cohen, both prominent social science researchers, began knocking on philanthropists’ doors with a proposal. They said conducting a national study of American Jews today would cost about $2.7 million, far less than the last one.

While they convinced big players of a national study’s value, no one was willing to commit to lead funding. Ukeles and Cohen realized that communal will and resources were in too short supply to get a new national study launched.

The Jewish Federations of North America — which is the name that UJC adopted last year in a rebranding effort — confirmed that the group had no immediate plans to get back into the business of running national Jewish population surveys.

In 2006 UJC copyrighted the NJPS name, ensuring that, though the organization wasn’t planning to conduct another one, no one else could use the name.

“We own that brand, and should there ever be a decision by the federations that there’s a need for another national study, it’s important to make sure there’s consistency and logic to it,” Berkofsky said.

Even without the NJPS name, there could be another study trying to track national trends over time. A few researchers are currently using a range of approaches to do just that, without spending as much money.

Leonard Saxe, director of the Steinhardt Social Research Institute at Brandeis University, is using data collected by the government and private pollsters, like Gallup, along with research he has done for Jewish groups, including Taglit-Birthright Israel and the Foundation for Jewish Camp, to draw larger conclusions about American Jewry.

In all, he expects to synthesize information from several hundred surveys, few of them Jewish, and do a cross-survey analysis in an effort to produce reliable information about American Jews.

While the decennial U.S. Census doesn’t ask about religion, the federal government spends tens of millions of dollars a year funding a range of surveys that do address this topic, Saxe said.

The General Social Survey, for instance, run since 1972 by the National Opinion Research Center at the University of Chicago and funded by the government’s National Science Foundation, asks about everything from views on abortion to respondents’ zodiac signs. Since 1988 it has asked about identification with one of the largest three Jewish religious movements, along with a few other Jewish-related questions.

But, Saxe acknowledged, “these surveys don’t have questions about whether you go to shul or your attitudes towards Israel.”

Ira Sheskin, a professor of geography at the University of Miami, conducted 21 local Jewish community studies in small and intermediate-sized communities between 2000 and 2008. He has now compiled the 19,000 interviews into one data file, which can be analyzed for information about 500 different variables, Sheskin said.

But there is no replacement for a comprehensive national study of Jewish identification and behavior, some say.

“It’s nonsense to try to piece things together,” said Ukeles, who himself has done 16 local Jewish community studies. “You can’t get the intermarriage rate or data about Jews who identify as secular. The only way is a true national study,” he said.

Barry Kosmin, a research professor at Trinity College, in Hartford, Conn., was a principal investigator of the 2008 American Religious Identification Survey, and from that he analyzed Jewish trends. In a paper titled “The Changing Population Profile of American Jews 1990-2008,” he found a decline in the number of Americans who say that their religion is Judaism, from 3.54 million in 1990 to 2.93 in 2001, to 2.7 million in 2008.

While the information from the National Jewish Population Surveys belongs, in a sense, to the entire Jewish community, the findings of individual researchers are regarded as proprietary.

Sheskin, for one, says he hasn’t shared his data with other researchers.

“No one has asked me for it. I will consider it on a case-by-case basis,” he said.

Kosmin said that conducting a national survey focused specifically on Jews has an intrinsic benefit.

“In 1790, the first practical act of the new federal government under the Constitution was to carry out the Census. It allocated congressional seats, but the act of counting the people also created a nation. It creates a national feeling of common destiny,” Kosmin said. “That’s what you lose when you don’t have a national Jewish survey.”