Antisemitism and This Recession: The Dog That Didn’t Bark 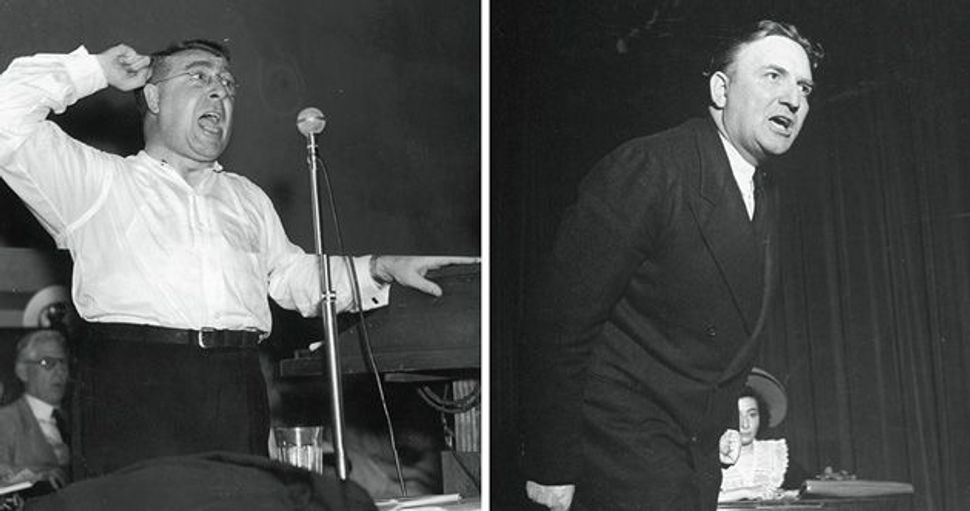 It was late 2008, and if ever the country seemed primed for a revived outbreak of the populist formula equating Wall Street with Jews and both of these with evil, this was a moment when the stars were aligned in malignant confluence.

Lehman Brothers, the venerable investment bank with a notably Jewish history, was the prominent catalyst when the United States plunged into its worst economic downturn since the 1930s. But that was far from all. Two weeks later came the turn of American International Group Inc. — the firm that Washington felt it could not afford to let fail — which had only recently ousted its longtime leader, Maurice “Hank” Greenberg, amid a highly publicized accounting scandal.

Jewish anxiety was only heightened when, around the same time, the wave of publicity hit regarding mega-Ponzi schemer Bernard Madoff. Here was a truly malevolent figure, a handy poster child for the abuse and fraud now seen as characterizing his era. Madoff seemed to have walked out of the pages of Der Stürmer, a personification of antisemitic stereotypes — avaricious, manipulative and deceitful.

With unemployment stuck at about 10%, and few expecting this to change anytime soon, we are still suffering the effects of a cataclysmic recession, one that seems to have its origins, in good part, in the nation’s financial institutions. Not surprisingly, Jews have pricked up their ears, waiting for the howls of the antisemitic hounds.

But this time, the dog has failed to bark.

Why? Counterfactual explanation in history — explaining why something failed to happen — is necessarily a rather speculative enterprise. But here are some informed speculations.

One can point to the fact that so many of the people who work on Wall Street today, from analysts to CEOs, are not Jewish. When the congressionally mandated Financial Crisis Inquiry Commission met last January and grilled the heads of the four largest (surviving) Wall Street firms, there was only one Jew among the interrogated: Lloyd Blankfein of Goldman Sachs Group Inc. (The others, for the record, were John Mack, a descendant of Lebanese Christians; Jamie Dimon, a descendant of Greek immigrants, and Brian Moynihan, who one assumes is of Irish-Catholic stock.) Moreover, a random walk down Wall Street will confirm that an increasing percentage of its denizens are of Asian origin.

People of Jewish origin were, of course, in evidence in the ongoing political process of trying to deal with the crisis. But they were present on every side of the issue. Jews such as Federal Reserve Chairman Ben Bernanke and presidential aide Lawrence Summers were certainly prominent among the policymakers dealing with the mess, and were often charged with protecting Wall Street. But those making that charge and urging more vigorous government action to rein in Wall Street included economists such as Paul Krugman and Joseph Stiglitz, not to speak of Vermont’s Socialist senator, Bernard Sanders — Jews all.

Despite these facts, Jews had good historical reasons to worry. The symbolic connection between Jews and finance has deep roots in the culture of Western Christendom.

In the Middle Ages, the lending of money for interest was regarded as abhorrent and parasitic — a set of associations based upon biblical verses combined with Aristotle’s condemnation of money lending as unnatural. Nevertheless, money lending was recognized as a necessary function, and one in which people were not likely to engage without receiving returns. So, the odious activity of money lending was left to the Jews. They were a people already stigmatized in Christianity for the moral blindness inherent (as the church saw it) in their failure to recognize Jesus as the messiah.

Western Christendom’s condemnation of usury — the lending of money at interest — jibed with the popular perception of peasants and laborers that only those whose work produced sweat were truly productive. This, of course, ignored the role of mental activity in economic production, activities such as the calculation of risk, or resourcefulness in discovering economic opportunity in overlooked tastes and markets.

In the 19th and 20th centuries, antipathy toward Jews often went hand in hand with antipathy toward finance. Each tended to burst into public life with particular vehemence during the periodic crises to which capitalist economies are prone. For much of the 19th century, the attack on finance took the form of an attack upon the Jews — and especially on the Rothschilds, the personification of Jewish finance. The Nazis were among those who sounded this theme, calling in their party platform for “the breaking of interest slavery.” In the United States, Henry Ford declared in the 1920s that “the Jew is a mere huckster, a trader who doesn’t want to produce, but to make something out of what somebody else produces.” And during the Depression of the 1930s, the radio broadcasts of the Rev. Charles Coughlin and mass rallies of the Rev. Gerald L.K. Smith assailed the Jews as both communists and international bankers.

Seen in historical perspective, the absence of such rhetoric in the current economic downturn is quite remarkable. Part of the answer may lie in the fact that more and more people are involved in one way or another with the financial sector, and are aware — on some level, at least — that their savings and pensions are linked to what happens on Wall Street.

There are other reasons, of course. National Socialism gave antisemitism a bad name. Jews are more integrated than ever into American life, where they are one minority among many. Indeed, contemporary Americans tend to like Jews. For better or worse, they are increasingly open to marrying them. Many of the traditional religious sources of antisemitism have diminished. In the decades since the Second Vatican Council, the Catholic Church in the United States has done a remarkable job of extirpating anti-Jewish elements of the Catholic tradition (to the consternation of a small rump of traditionalist Catholics). And evangelical Protestants tend to be philo-Semitic.

The fact is, many polls show that antisemitism is at lower levels in the United States today than at any time since the Anti-Defamation League began measuring it in 1964, when it was already in decline. (The level is substantially higher among African Americans and foreign-born Hispanics, but in those cases, too, it is falling).

To be sure, many Americans suspect that Jews are richer and more professionally successful, on average, than non-Jewish Americans. And they are right. But unlike some national cultures, Americans today tend to value professional and economic success. Cultures that tend to resent the economically successful, either as an affront to equality or on the implicit assumption that the economic gains of some must be at the expense of others, tend to be more hostile toward Jews, and given to conspiratorial theories to explain their economic success. But envy and resentment — the bane of democratic capitalist societies — are less powerful in the United States than in most nations.

On the extreme margins of the political right, of course, one can find new invocations of the malicious force of international Jewish finance. But these groups are far out of the mainstream. In the United States and Western Europe, at least, there is no wave of public sentiment blaming Jews for the current economic crisis.

What does remain is a residue of the traditional linkage of finance and parasitism. At times, recent American politicians, up to and including the president, have used political rhetoric that supposes that any gain for Wall Street is a loss for Main Street: a more modern expression of the notion that finance is fundamentally unproductive. The difference this time is that we have just gone through a decade in which the financial sector grew far more rapidly than the rest of the economy, partly through the development of new financial products that actually turned out to be counterproductive. But that criticism — some deserved, some exaggerated — has been quite free of antisemitism.

And that, for those with a consciousness of history, is something quite noteworthy.

Jerry Z. Muller is a professor of history at The Catholic University of America in Washington, and author of the recently published “Capitalism and the Jews” (Princeton University Press).

Antisemitism and This Recession: The Dog That Didn’t Bark