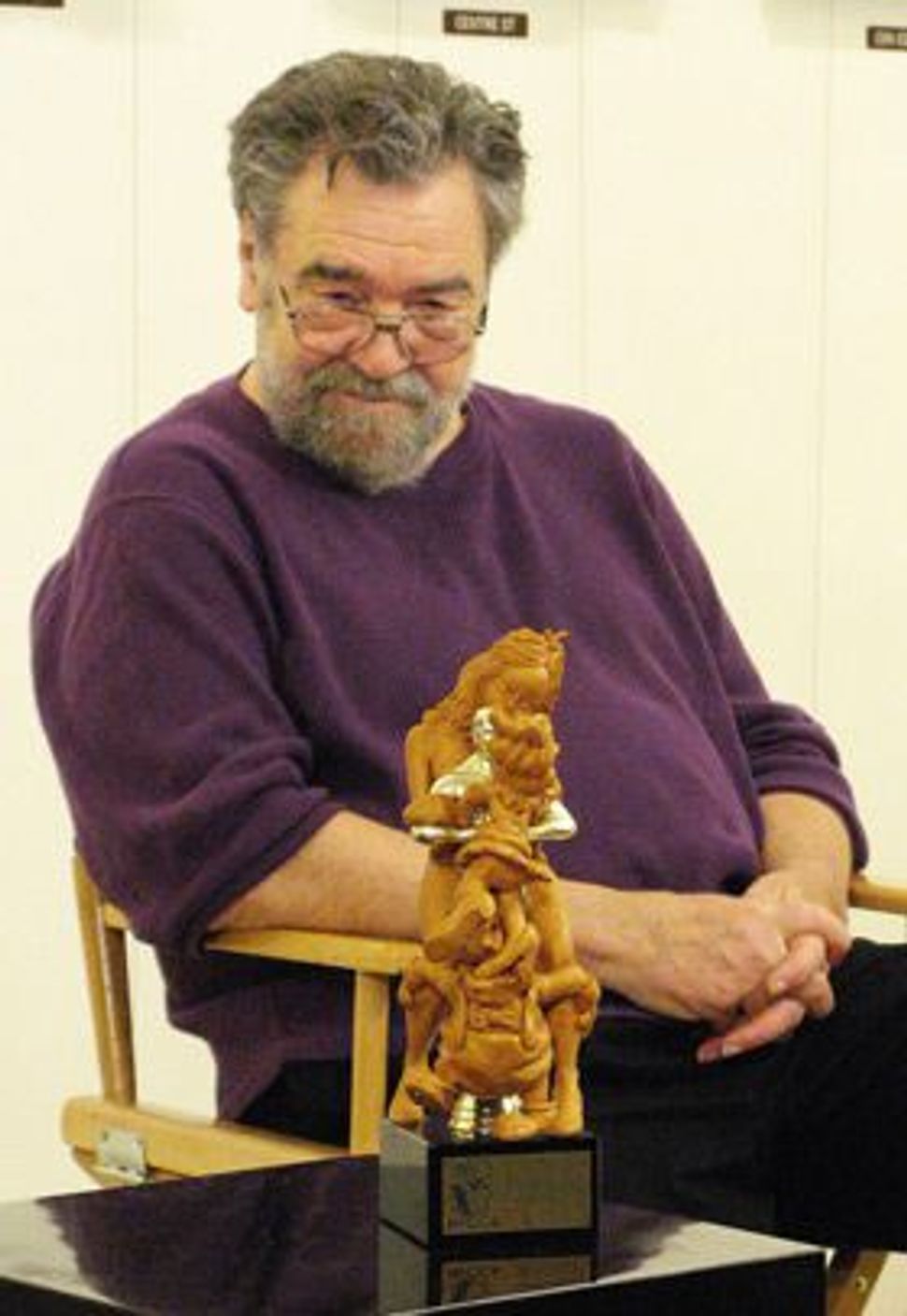 If you have ever had, or plan to have, an endoscopic procedure, then drink a l’chaim to South African born Forward reader Dr. Basil Hirschowitz, who was an honoree at the Castle Connolly National Physician of the Year Awards, held March 22 at the Hudson Theatre. Along with two of his colleagues at the University of Michigan, Hirschowitz developed the flexible fiber-optic encased endoscope that revolutionized diagnosis and treatment of digestive disorders. Listed as “one of the top inventions in medicine in the 20th century,” according to his journal bio, the prototype is now in the Smithsonian Institution. During our post-award chat two days later, the 86-year-old doctor, who received his degree from the University of Witwatersrand, Johannesburg, before immigrating to the United States in 1953, recalled: “Originally we trained with rigid instruments…. We used sword swallowers to help endoscopists train. It took five to seven years [for the invention] to catch on. It energized the gastro [enterology] game….” He told me of his “Litvak” grandfather, who came to South Africa from Latvia in the 1890s to farm, and his grandmother, who ran the farm and spoke to the servants in Yiddish with a smattering of Afrikaans. “My mother died with the regret that I did not get the Nobel Prize” for which, Barbara, his wife, said he had been up four times. “Each year, my mother would say, ‘Next year in Stockholm.’” 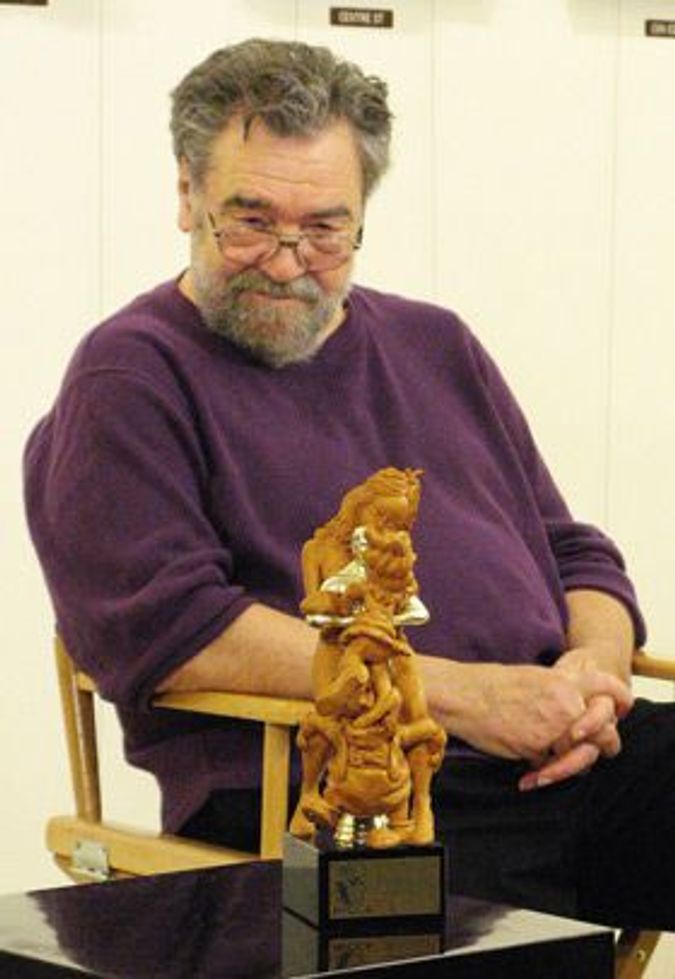 “My Yiddish evaporated when I left South Africa,” Hirschowitz said. “I used to read the Forverts and Bintel Brief [with my father, who awaited the [paper’s] arrival anxiously.” Like the other Jews in the small town of Bethal, his grandfather settled into farming, and he grew up speaking Yiddish, Afrikaans, Zulu and other native dialects. “I wanted to be a chemist, but my father’s lawyer told me that in those uncertain times [the 1940s]. It is best to carry everything in your head.” Describing the Boer-British-German dynamics of the era, Hirschowitz recalled: “By the time of World War II, there were parades [down streets] with swastikas hanging out the windows…. There were a lot of German farmers already dividing up the Jewish farms. There were few Jewish shopkeepers.”

I wanted to hear more, but Dr. and Mrs. Hirschowitz had to catch a flight to Birmingham, Ala., where, for the past 50 years — until 2009 — he had been the director of the Division of Gastroenterology/Hepatology at University of Alabama at Birmingham. In 2008, The Birmingham News noted that “so distinguished is his career, his résumé fills 82 pages.”

The National Physician of the Year Awards is the brainchild of John Castle and John Connolly, respectively chairman and president/CEO of Castle Connolly Medical, Ltd., and publishers of “America’s Top Doctors.” This year’s award recipients were Larry Norton, deputy physician-in-chief for breast cancer programs at Memorial Sloan-Kettering; Ching-Hon Pui, chair of the Department of Oncology at St. Jude Children’s Research Hospital in Memphis, Tenn.; Leonard Apt, who is a professor emeritus of ophthalmology at the University of California, Los Angeles, , director emeritus and founder of UCLA’S Division of Pediatric Ophthalmology and Strabismus and co-director of the University’s Center for Child Blindness, and John Buse, director of the Diabetes Care Center and chief of the Division of Endocrinology at the University of North Carolina at Chapel Hill’s School of Medicine. Castle presented National Health Leadership Awards to the son and daughter of Christopher Reeve and Gae Exton, (Reeve’s girlfriend prior to his marriage to Dana Morosini ), Alexandra Reeve Givens and Matthew Reeve, who are active members of the board of directors of the Christopher & Dana Reeve Foundation.

From “Fritz the Cat” to “The Streets”: In-Your-Face Artist Ralph Bakshi Does It His Way!

“Am I Jewish enough for the Forward?” maverick animator, writer and film producer Ralph Bakshi asked me as, with his hand on my shoulder, he pointed to his latest creation, “The Streets,” at the Animazing Gallery in SoHo. At the March 19 preview, animator Bill Plympton and Museum of Comic and Cartoon Art Chairman and President Ellen Abramowitz, along with colleagues, friends and family, took in Bakshi’s imaginings of streets on Manhattan’s Lower East Side and in the Brownsville section of Brooklyn. The 48 works include Rivington, Hester, Bleecker, Henry, Orchard, Broome and Delancey streets immortalized in theater, literature and film. Imbedded in each is material from that street. Bakshi, creator of “Fritz the Cat,” “Heavy Traffic,” “Wizards,” “American Pop” and the controversial “Coonskin,” was born in Haifa in 1938. His parents met in 1933 when his father, Eliezer, from the Crimea, and his mother, Mina, from Latvia, met at Haifa’s port and Eliezer, a customs inspector, was called to investigate “a young woman from Latvia in possession of four silver teaspoons.” Bakshi continued, “The family left for New York in October 1939… on [a] Greek ship, the last ship to leave Haifa. It was stopped by a [German] U-Boat, but was not detained.”

“These [streets] were the landscape of my youth,” Bakshi said as he maneuvered me around the room, pointing to his creations. “I’m happy with what I have done.” Influenced by a group of painters who became known collectively as the Ashcan School, Bakshi stressed, “My major inspirations were Chaim Soutine, as well as Jackson Pollock and Willem de Kooning.”

Years of seclusion in an all-glass house in New Mexico “with a view of the mountains… have set me free,” he said.

When Plympton and Abramowitz presented Bakshi with a Lifetime Achievement Award, it was not the usual plaque, but a one-of-a-kind clay sculpture of an animated ménage à trois — a gold Oscar embraced between a zaftig cartoonish nude babe and a replica of another one of his cartoon characters. The crowd’s reaction? Roars of laughter.

In an exploration of Bakshi’s creativity — the bold and brazen tome “Unfiltered,” written by** John Gibson** and Chris McDonnell and with a foreword by Quentin Tarantino (Universe/Rizzoli 2008) — the opening line of the chapter on his film “Coonskin” has the authors quoting the film’s opening line : “F..k you!” Further, Gibson and McDonnell write,” That’s the very first breath of ‘Coonskin’ — course, honest, a real conversation starter.

Gibson and McDonnell write: “Ralph grew up a poor, white Jew. Some of his family narrowly escaped Nazi persecution; others never had a chance…. But ‘Coonskin’ is not about the Jewish immigrant experience. He had no qualms with the blacks, Italians, Irish and Jews going about their daily routines in Brownsville…. ‘In my generation, coming from World War II, with the persecution of so many, how dare anybody even point a finger at someone else?’” Then Ralph explains: “My production manager, Don Selers, was gay and some of the guys wouldn’t take orders from him — so I asked them to leave. Women came in — I paid them as much as men. If you could do the job, you got the job.”

In the opening frames of his animated 1981 film release “American Pop,” Bakshi captures the visceral terror of a pogrom on a Jewish community in 1890s czarist Russia, whose immigrant refugees later settled on Bakshi’s Lower East Side and Brownsville “Streets.”

“The Streets” is on view through May 9.