Triangle Fire Chalking Links a Shul to Its Past 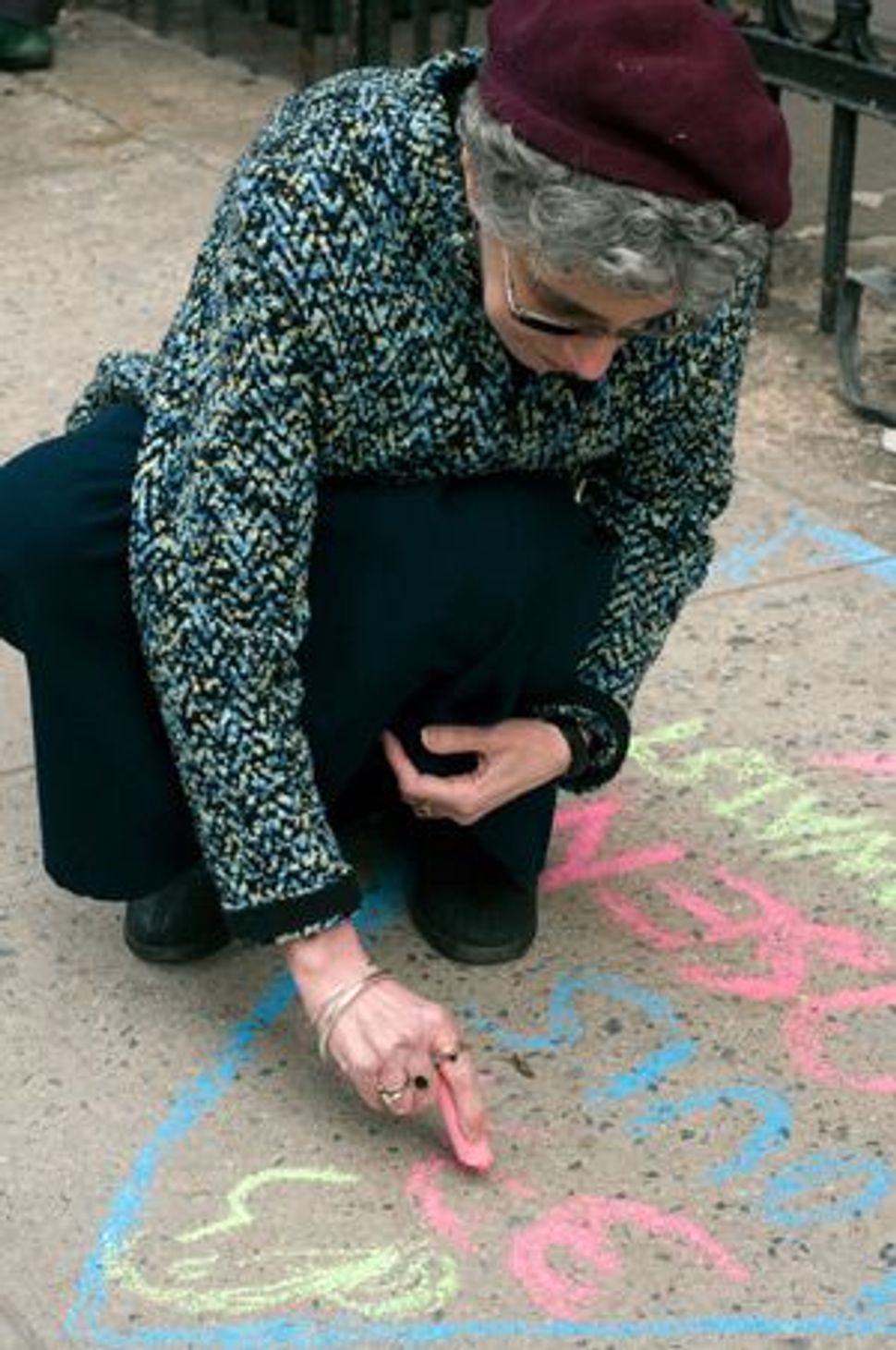 On the morning of the 99th anniversary of the Triangle Shirtwaist Factory fire, Esther Malka Boyarin is sweeping trash off the stoop of the Stanton Street Shul, on Manhattan’s Lower East Side. 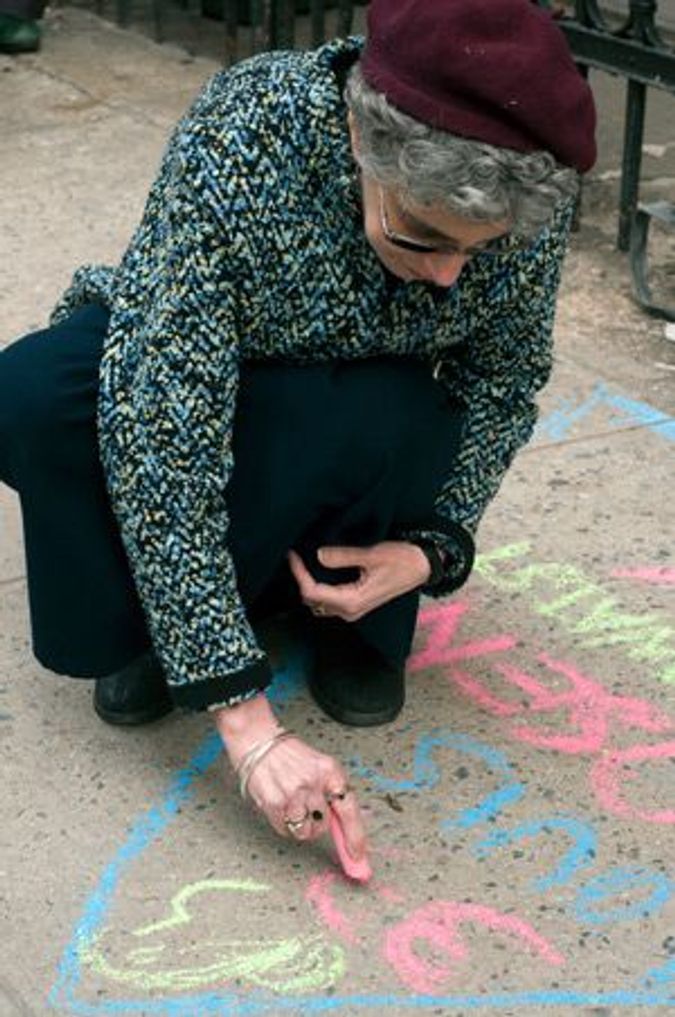 Boyarin is not the janitor — she’s a synagogue board member. But such distinctions are blurred at the synagogue, one of the poorest of the few remaining in the neighborhood whose storied streets once teemed with newly arrived Eastern European Jews.

The stoop clean, Boyarin kneels on the sidewalk with a few pieces of chalk and deliberately writes a name, an age and an address using different colored sticks:

As the synagogue’s rabbi and a few onlookers stand by, Boyarin adds another phrase: “We Remember.” Finally, someone lights a yahrzeit candle atop the temporary shrine.

Rosen was one of 146 people killed in the infamous Triangle Shirtwaist Factory fire on March 25, 1911. The victims, mostly young Jewish and Italian immigrant women, were trapped behind doors that were locked by managers protecting against theft. The outrage over their deaths brought about sweeping new workplace-safety laws. For the descendants of the communities the victims left behind, their deaths serve as a reminder of a Jewish reality that now seems very distant.

But not for Boyarin. She has flown in for the occasion from North Carolina, where her husband holds a distinguished professorship in the religious studies department at the University of North Carolina at Chapel Hill. Despite his recent posting there, she still considers the Avenue A building in which she lived for some 30 years to be her home. She returned to make Passover there and to be with her community — and for this ceremony.

For Boyarin and other members of the synagogue, this brief ritual parallels the Seder’s commemoration of the Exodus, evoking memories of when they, too, were oppressed strangers in the land of America.

“This is not like distant history to us,” says Boyarin.

It was six years ago that Boyarin first saw the name of a Triangle Shirtwaist victim chalked in front of her own doorstep. Encountering it as she was leaving home, she felt a chill. “Someone was calling me, saying, ‘Remember me; remember this could have been you,’” she says. “It was very powerful. It was very scary.”

The chalking project was conceived in 2004 and has been organized since then by Ruth Sergel, an artist. An interactive map of the Triangle victims’ homes prepared by Sergel looks like a record of a brief, virulent outbreak of plague, with the Stanton Street Shul at its epicenter.

Some 50 years later, the synagogue attracted the attention of Village Voice reporter Paul Cowan for much different reasons. Visiting the shul in the early 1970s, Cowan, since deceased, was fascinated by its atmosphere and made the synagogue the centerpiece of his 1982 book, “An Orphan in History.” The surprise best-seller chronicled the secular journalist’s discovery of religious Judaism. The Stanton Street Shul, known formally as Congregation Bnai Jacob Anshe Brzezan, was still a workingman’s synagogue back then. The congregants, Cowan wrote, were “former sanitation workers, bakers, rag vendors in their seventies and eighties.” Tending this most humble of flocks was Rabbi Joseph Singer, a Polish Hasid from a distinguished rabbinical family that traced its lineage to a famous brother-in-law of the Baal Shem Tov, Hasidic Judaism’s 18th-century founder.

Singer, who fled his hometown of Pilzno in 1939, made his living as a diamond cutter and later as a social worker, while also leading the Stanton Street congregation. To Cowan, he seemed both holy and deeply authentic. “[T]he beliefs which made him sound old-fashioned or finicky or sexist when I described them to my liberal friends had endowed him with a raw spiritual power that I had never before encountered,” Cowan wrote.

Singer died in 2006. Today the synagogue is led by Rabbi Josh Yuter, a redheaded graduate of Yeshiva University and the University of Chicago who worked at JPMorgan Chase & Co. before the crash. Times change. Standing in the disused women’s balcony of the synagogue, Yuter talks about the trouble he has been having lately switching his blog over to a new content-management system.

Yuter is a new breed of Orthodox rabbi, but he is not here to turn his back on the community that Singer embodied. “We cannot divest from the history of the Lower East Side,” he says, standing by the chalked name of Rosen. 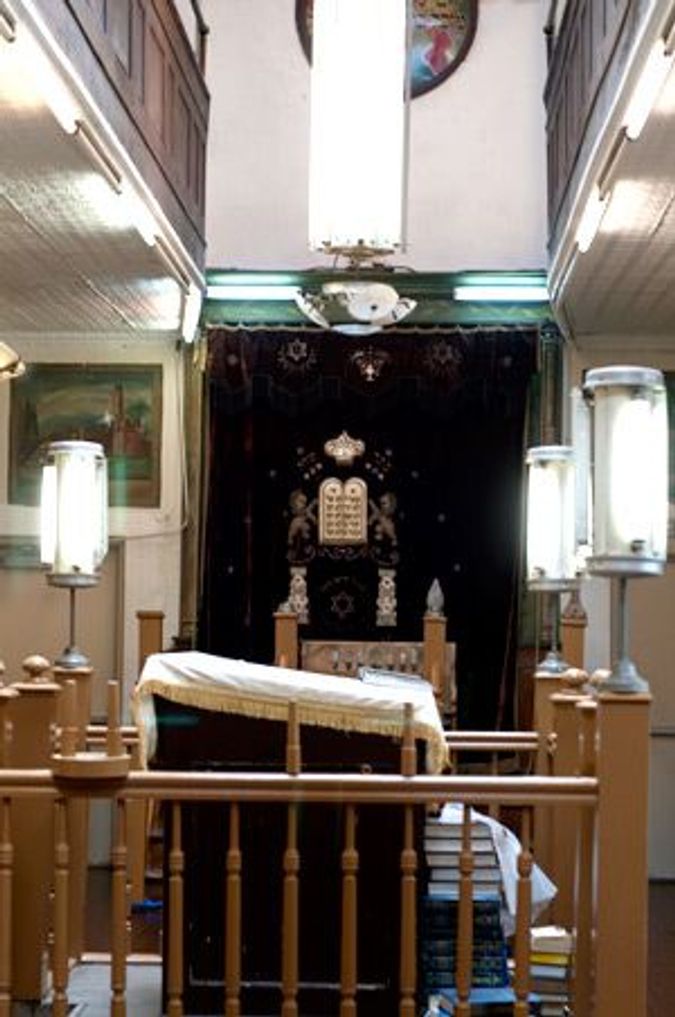 Neighborhood Institution: The Stanton Street Shul, once a workingman?s synagogue, has fallen into disrepair. Image by ARIEL JANKELOWITZ

Both impressions are accurate. Up a short flight of ancient stairs, the main sanctuary is barren and water stained, and in the midst of renovations that, by necessity, are paid for piecemeal. But the walls, painted with the symbols of the Jewish zodiac, are beautiful and exotic. Heated in the winter by an open-flame gas heater from the 1920s, and cooled in the summer by an air conditioner whose remote control is missing, the main sanctuary might not even be recognized by a resident of the Upper East Side — where houses of worship are more salubriously appointed — as a synagogue. But for some, that is the point.

Ten years ago, Boyarin says, the congregation’s members were mostly older than 70. The gentrification of the Lower East Side, by which young hipsters have begun to displace immigrants and the working poor, has changed this. While other Lower East Side synagogues are still dominated by the old guard, Boyarin says the majority of the Stanton Street Shul’s100 congregants are now younger than 35.

“Stanton Street’s advantage was that it was poor and authentic,” Boyarin says.

Boyarin and Yuter say that while other Lower East Side congregations were unwelcoming toward newcomers, the older members of the Stanton Street Shul didn’t mind that they dressed and lived differently — or perhaps the old-timers needed them so much that they didn’t care. Boyarin tells a story of a woman who visited a nearby synagogue on the Sabbath in a low-cut dress, only to be sternly advised that she might be more comfortable at Stanton Street.

Now the synagogue is a living compromise, defined by Boyarin as Open Orthodox, a term coined by the religiously progressive Modern Orthodox Rabbi Avi Weiss. Yuter’s predecessor was a graduate of Weiss’s Yeshivat Chovevei Torah. But the synagogue’s president (who “has been 93 for at least four years now, but who’s counting?” says Boyarin) davens as he did in Poland as a boy, and the synagogue skips certain prayers because that’s the way it was done in his shtetl.

Now, even as the synagogue’s connections with its European past shift, the bonds between it and its neighborhood grow stronger. The memory of the Triangle fire is a connection to that past.

“This shul is part of the history of the neighborhood,” says Yuter. “This is just part of who we are and always have been.”

Triangle Fire Chalking Links a Shul to Its Past