A Parent’s Responsibility To Observe 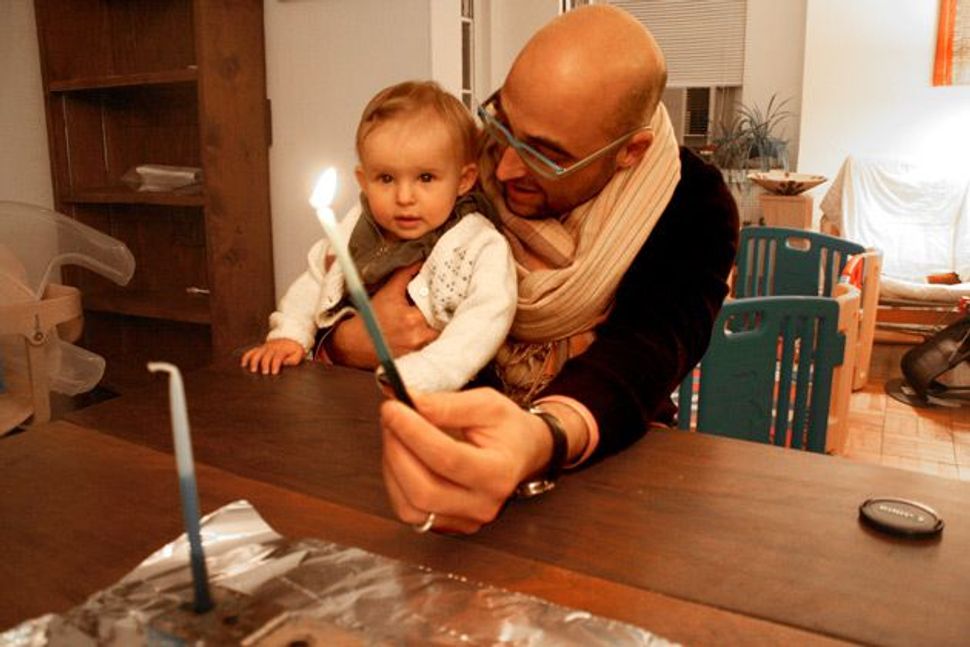 My daughter, Orli, is at a very lovely age. At 14 months, she’s of an incredibly sunny disposition, most of the time. She burbles and babbles and, occasionally, says a word. She laughs and runs and plays. She’s intensely interested in discovering and engaging the world around her.

In restaurants, she wants to walk from table to table, flashing a big, almost fake, grin, hoping for a response. Sometimes she gets what she’s looking for — laughter. But not everyone wants to talk to a toddler. And when people brush her off, or my partner, Ian, and I pre-emptively lead her away, her mood shifts radically, a squall comes over her and she screams, sits, makes her body limp, wanting to keep engaging the diners. Part of the problem is that she’s on the cusp of communication: Those squalls come if she knows exactly what she wants and we just can’t understand her, or if she can’t understand why we’re so mean. She’s so close to talking, and yet not at all there.

How much does she understand of what we do or why we do what we do? It’s hard to say. She definitely gets tone and understands comfort, love, bath time, meals. She knows who we are; she knows her stuffed animals and toys.

But does she get anything out of concepts like religion or, more specifically, our Jewish observance? Not just yet.

The other day, I took her to a rainy-day indoor playground near my parents’ house in northern New Jersey. It was the Monday morning before our Passover Seder, and the space was filled with other young couples in town for the holiday, chattering while their kids played.

One woman said to another mom, “Oh, I’m not going to bother with observing Pesach this year.” She gestured toward her son, who looked about Orli’s age: “I mean, he can’t understand it anyway. I’ll deal with it when he’s older.”

Ian and I discussed the comment on the way back to my parents’ home. On the one hand, she was right. Does Orli understand kashrut? Absolutely not. And as we’ve been inclined to get her to eat something, anything, we’ve often nixed separating meat and milk. Even the Sabbath — which we host in our home almost every week — she mostly misses; she goes to bed before we say Kiddush; she gets her challah separated from its ceremonial meaning: as either French toast or a ripped-off chunk during her much earlier dinner. For Passover, about which I’ve always been rigorously kosher, we debated the merits of how Cheerios buy us peace, and decided in their favor, holiday notwithstanding.

“She doesn’t get it anyway,” we’d decided, not unlike the woman at the playground. “It’s not worth losing her primary food source.”

Passover — and the Seder — is a lot about kids. There’s a fiery, fantastic element to it all; there’s magic (plagues!) and intrigue and prizes (afikoman!), and questions to learn to ask. My warmest childhood memories are of Seders at my grandparents’ house, cheeks burning with pride, singing “Ma Nishtana” from memory. The house would be turned upside down for the holiday; ancient boxes, filled with dishes and spices and a whole other kitchen, are schlepped from the basement and unpacked. And, just as the woman at the playground said, those memories begin at about 4 years old.

But is the observance only for kids old enough to understand its meaning? If we let it no longer be for us at all — if we let our observance go until the day we deem she “gets it” — won’t we have lost something? Won’t we have communicated to her, over the years just how unimportant we believe observance actually is?

More than that, and just as important, if we put it all on hold, won’t we have given up an opportunity to feel as though we ourselves came out of Egypt? Won’t we have lost our own connection to why we celebrate and observe?

So for whom is it? When I was talking about this question with my father during the first of our two Seders, he mentioned to me a passage that he’d read from the Jewish Theological Seminary’s commentary on Tzav, the parsha that was read the week before Passover began. The Seder, he said, is one of the true ageless, genderless events; in fact, by all intents and purposes, it is the most “community oriented” of events in Jewish life.

In the commentary, which I found next to my father’s tikkun on the bookshelf that night, Rabbi Abigail Treu, the director of gift planning for JTS, quotes from Baruch Bokser’s “The Origins of the Seder” (JTS Press, 2002), itself quoting an anthropologist, which notes that “each person is required to join the ritual whatever his or her degree of learning, belief, social status, or ritual participation at other times.” Treu explains, “In order for each of us to feel as if we personally were freed from Egypt… the emphasis is placed on the building of a community.”

I like that analysis on many levels. For one, that Seder, unlike morning minyan, for example, isn’t designated by gender — no matter what part of the Jewish spectrum you come from. The questions we ask, the tale that we tell, are not incumbent upon only a part of a group, but on all of the group; the heritage we carry, the legacy we believe in, is, necessarily, in order for its successful continuation, shouldered by all. Community isn’t something we can turn on and off, jump in and out of, or put off until later.

If we wait until Orli is old enough to get it, we’ll have missed the chance to create a foundation for her to believe in.

Sarah Wildman writes about the intersection of culture, politics and travel for the New York Times and Politics Daily.

A Parent’s Responsibility To Observe