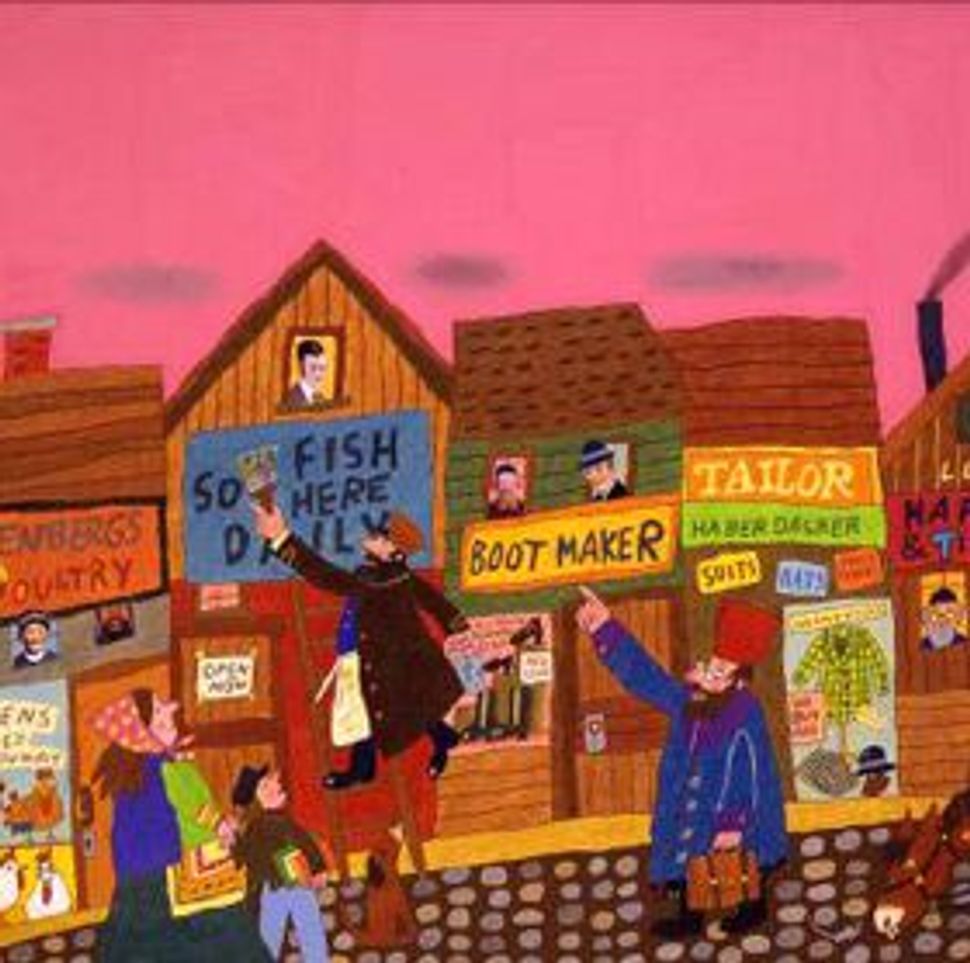 Image by SIMMS TABAK, FROM ?FOR KIBITzERS AND FOOLS?

Picture books have a long and colorful history in Jewish tradition, beginning in the 16th century with Haggadot and re-emerging in the second half of the 19th century as books for children.

A new exhibit, “Monsters and Miracles: A Journey Through Jewish Picture Books,” opening in Los Angeles on April 8 at the Skirball Cultural Center, presents a chronological and historical context of how the Jewish picture book has evolved .

The exhibit displays more than 100 original paintings, drawings, papercuts and collages from artists and authors as varied as Isaac Bashevis Singer, Arnold Lobel and Francine Prose. The Forward caught up with exhibit co-curator Ilan Stavans, Amherst College’s Lewis-Sebring Professor in Latin American and Latino Culture and a Contributing Editor at the paper.

The Forward: Is there a difference between illustrated books and picture books? 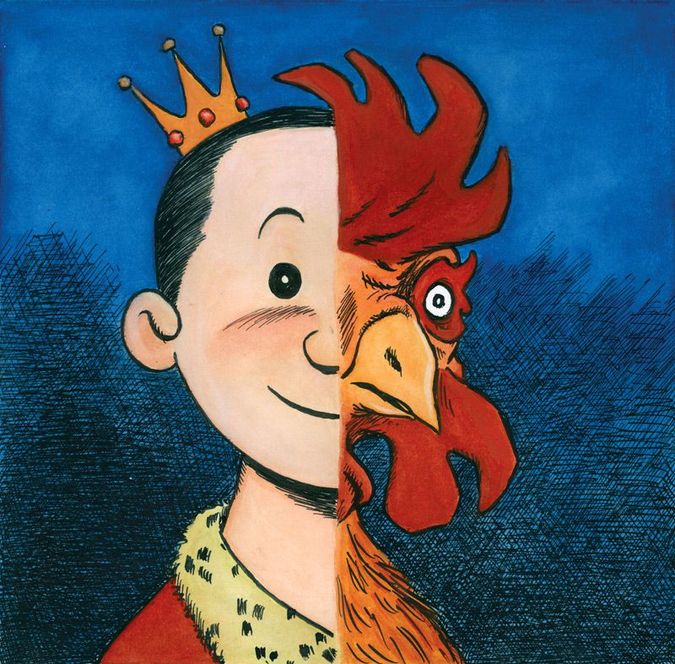 (click for larger view) Image by ART SPIEGELMAN, FROM ?THE ROOSTER PRINCE

Ilan Stavans: Picture books are peculiar items. They aren’t the same thing as illustrated books, in which the illustrations are subordinated to a text. Imagine, for instance, Gustave Doré’s illustrations of Rabelais’s “Gargantua and Pantagruel,” or Barry Moser’s of the “Pennyroyal Caxton Bible.” In the picture book, the equation between word and image is symmetrical, or at least appears to be so. Maurice Sendak’s “Where the Wild Things Are,” among the most influential picture books and the one that established our understanding of what picture books are, juxtaposes just a few sentences with a parade of illustrations that enable the reader to understand the complex inner world of the child who serves as protagonist. In the Jewish tradition, the prohibition against idolatry delayed the use of images in books. The illustrated books emerge during the Renaissance in the form of the Passover Haggadah, designed to keep the children’s attention focused on the Moses saga.

What makes a picture book Jewish? 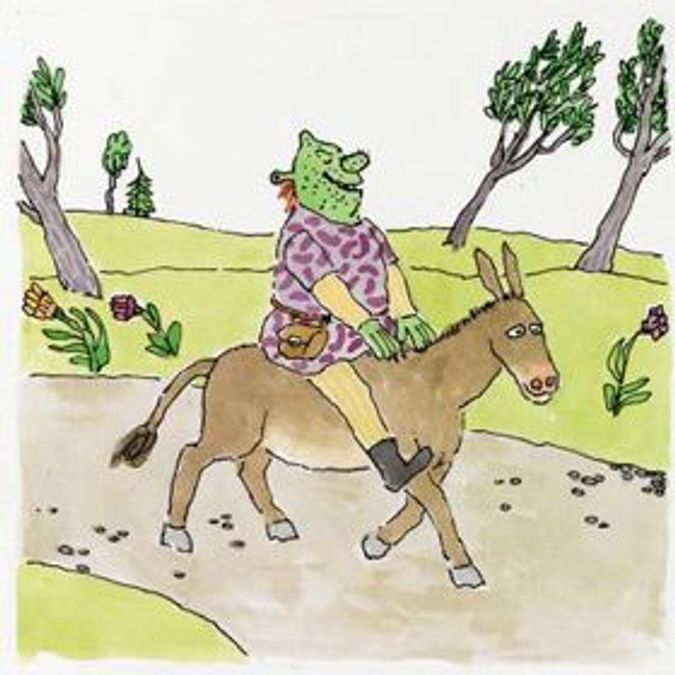 Image by WILLIAM STEIG, FROM ?SHREK?

It has been said that the picture book industry is a byproduct of European immigration to the United States, and that the explosion of the picture book industry worldwide is the result of a fertile Jewish entrepreneurship. In recent years, museums have been attracted to the phenomenon: There have been exhibits of the work of [Maurice] Sendak, William Steig, Eric Carle and Arnold Lobel, among others, as well as a current one at The Jewish Museum in New York of the oeuvre of Hans Augusto Rey and Margret Rey, creators of Curious George, a monkey that lives in a permanent state of escape, a characteristic that defines Jewishness in the Diaspora. But a picture book isn’t Jewish because its author is. Might it be its content? Well, Curious George is a Jewish creation, but, as in the case of Kafka’s work, there is no mention of the word “Jew” anywhere in his adventures. In other words, Jewishness is condition, a state of mind.

Picture books have a double audience: Children are the target readers, but since these artifacts are read aloud by adults in a bonding situation, adults are also its public. In fact, pictures books are extraordinary because they are simultaneously oral, written and illustrated. In the act of reading them, adults pass on the basic tenants of culture to the next generation: the concepts of good and evil, the idea of a journey, what fear is and how to handle it, etc. An aspect I’m fascinated with is originality. Frequently, picture books are less about telling than about retelling. The stories contained in them are known to the audience, first because they are part of tradition — an important source is the Bible, for example — and second because parents read these stories to children dozens of times. Originality, as is often the case in Jewish life, comes from repetition: Jews learn from an environment, then subvert it.

What led you to curate “Monsters and Miracles”? 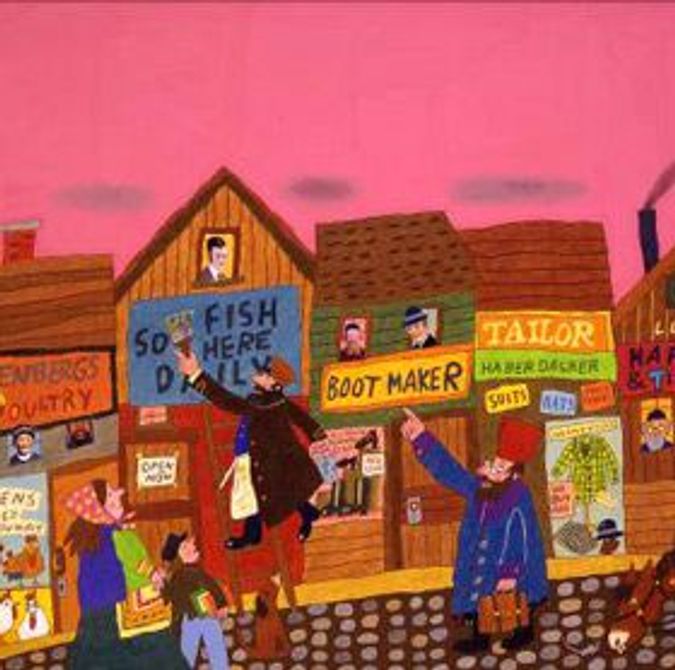 Image by SIMMS TABAK, FROM ?FOR KIBITzERS AND FOOLS?

My friend Neal Sokol made me conscious of the Jewish picture book tradition through a series of gifts — from a four-volume encyclopedia on the topic, to a vast collection of picture books in an assortment of languages. During a conversation, Sokol suggested that, having edited “The Oxford Book of Jewish Stories,” I should embark on a similar venture geared toward children. The Skirball Center, the Eric Carle Museum and the National Yiddish Book Center in Amherst welcomed us.

The material is organized thematically in broad sections, such as biblical tales (emblematic characters like Noah, Jacob, Moses, Kings David and Solomon), the vanished village (the shtetl in general, Chelm, the role of love, food, and memory in the Old World), mythical creatures that come from folklore (Golems, goblins, devils and dybbuks), passports to new lands (immigration and daring current trends like a pig who wants to be kosher, the jump from the page to the big screen, the role of the Internet in picture book art). In the exhibit, there are dozens of pieces by such writers and artists [as] Sendak, Steig, Carle, the Reys, Lemony Snicket, Isaac Bashevis Singer, Elie Wiesel, Art Spiegelman, David Mamet, Daniel Pinkwater, Mark Podwal and Francine Prose. It includes audio stations where children listen to the actual stories, narrated by actors like Ed Asner, Mayim Bialik, Elliott Gould, Allison Janney, Leonard Nimoy and Henry Winkler.

Have you written for children?

Never a picture book per se, but a number of stories, published in magazines like Ladybug and Cricket. In fact, the spring issue of Cricket commemorates the exhibit, compiling pieces with a Jewish sensibility the magazine has published through the years, as well as new material. It features an interview with Eric Carle, “The Mysteries of the Cabala” by Singer, “How I Learned Geography” by Uri Shulevitz, among other stories, and my own “Golemito,” which places the myth of the Golem in the Yiddish school I attended in Mexico City and highlights my interest in Nahuatl, the language of the Aztec empire.

“Monsters and Miracles: A Journey Through Jewish Picture Books” is on display at the Skirball Cultural Center through August 1, and then at the Eric Carle Museum of Picture Book Art and the National Yiddish Book Center in Amherst, Mass., from October 15 to January 23, 2011.