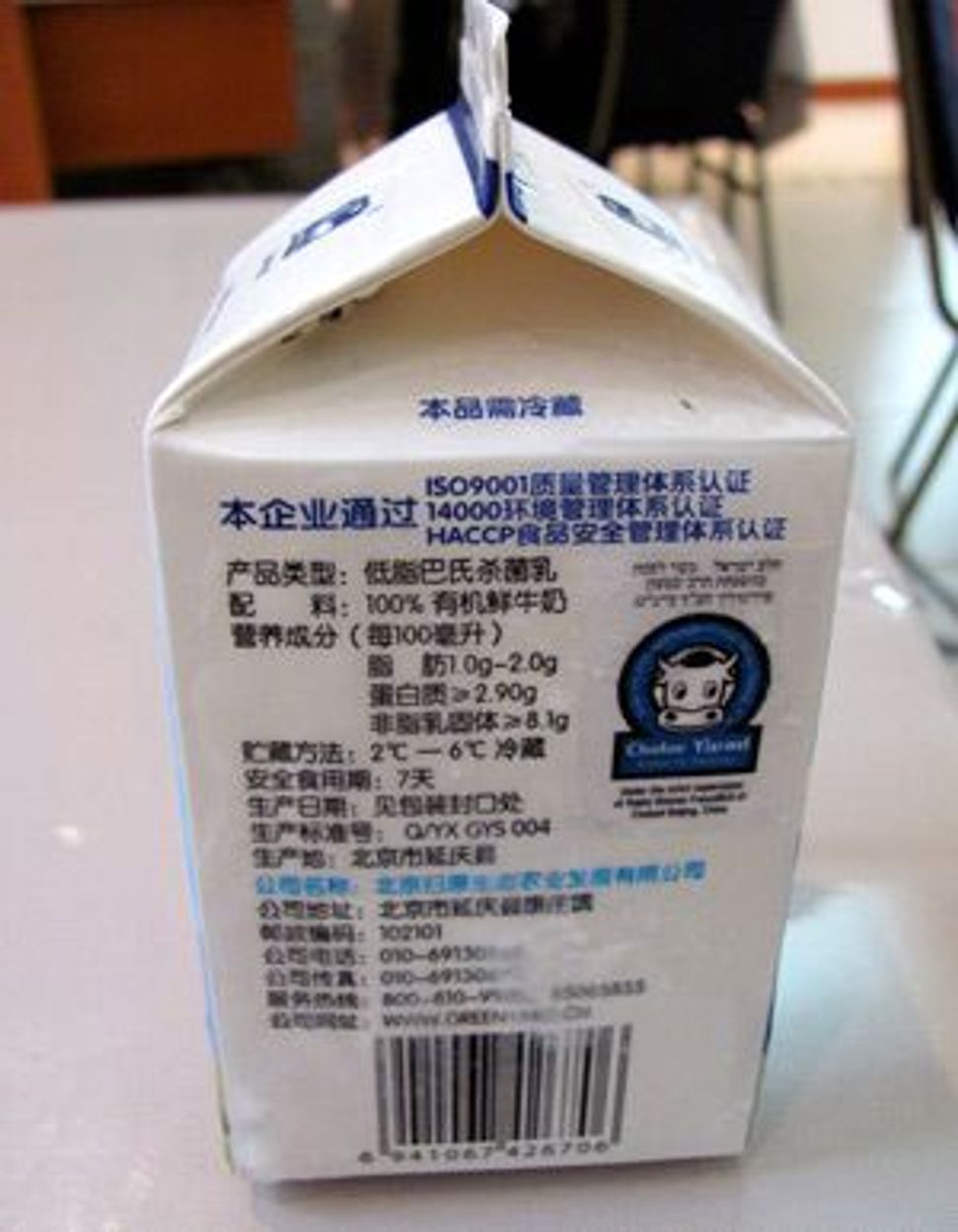 Certified: A carton of Chinese kosher milk with a Cholov Yisrael hecksher on its label. Image by ALEX WEISLER

At first glance, the carton is unremarkable: boxy and white, with a crudely sketched pastoral scene printed on the front — a forlorn bovine lounging in a pasture. 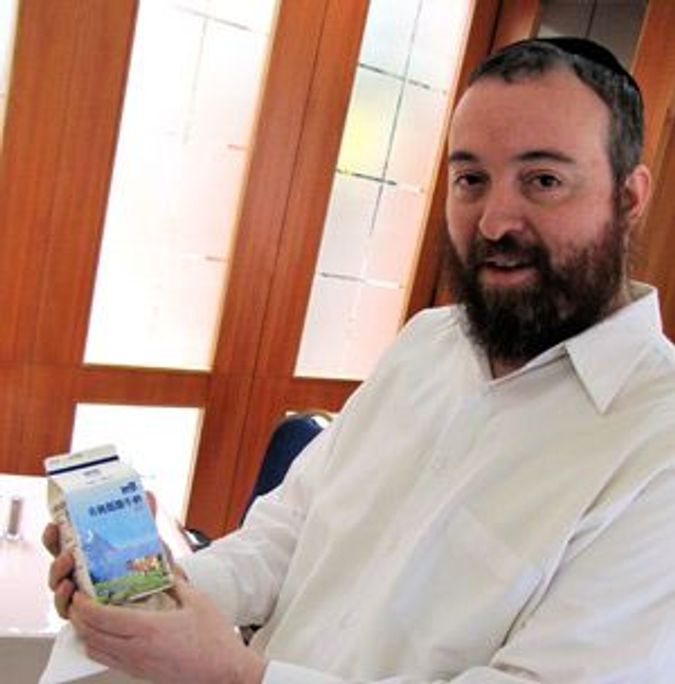 But on closer examination, two elements leap out: the words “Organic Low Fat Milk” and a drawing of a smiling, jaunty cow wearing a yarmulke — the very strict Cholov Yisroel hekhsher.

What’s inside the carton is more than a pint of unexplored possibilitzy. It’s a new development for the 2,000 Jewish families who inhabit China’s largest city, and another step forward for a country only beginning its cautious flirtation with milk.

Kosher. Organic. They’re both untested frontiers for the Chinese milk industry, which has struggled to restore public confidence after the 2008 melamine scandal that left six infants dead.

“Milk is a new experience in China,” said Grover Niemeier, a food-management expert who has been based in the country for five years. “It’s only in the last generation or two that milk has become available and milk has been consumed with infants and children as part of their growing up.”

For a Jewish community made up almost entirely of expatriates, the addition of fresh — albeit frozen — kosher milk is a welcome change from years of imported condensed or powdered dairy products. 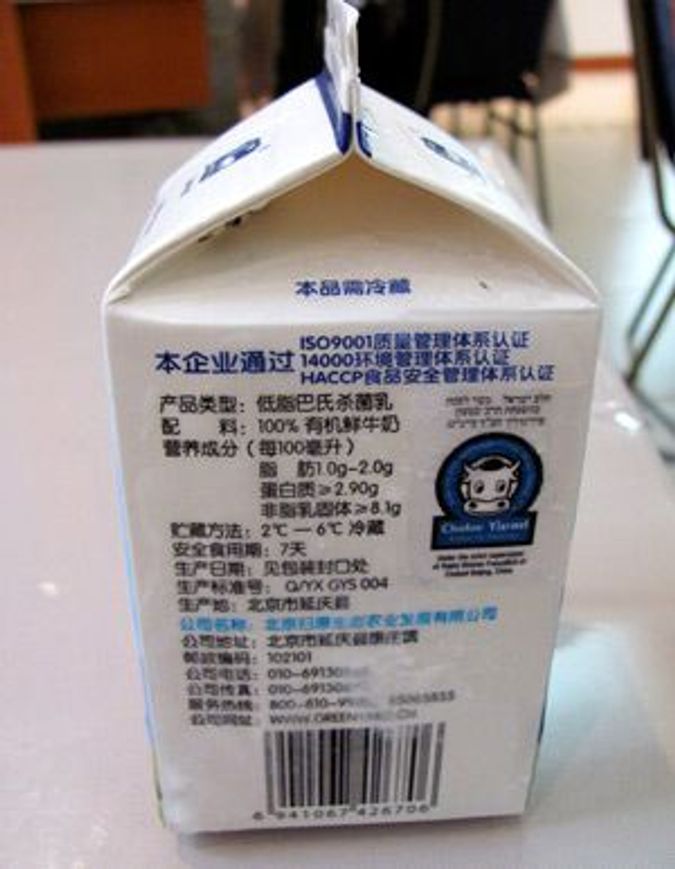 Certified: A carton of Chinese kosher milk with a Cholov Yisrael hecksher on its label. Image by ALEX WEISLER

Rabbi Shalom Greenberg, who runs the Chabad-affiliated Shanghai Jewish Center, said he orders about 20 to 30 cartons of the milk every few weeks. Once unfrozen, the cartons are good for seven days. Greenberg e-mailed all the people who use his center’s services to alert them to the development. The response has been positive, he said.

Ten years ago, Shanghai’s Jewish community numbered only 200. Now that it has grown tenfold, Greenberg said that more of the city’s Jewish expatriates are looking for kosher products.

Greenberg has worked to establish relationships with hotels, factories and Da Marco, a Shanghai Italian restaurant that began offering frozen kosher meals early in March. Sometimes the rabbi contacts manufacturers, and sometimes they approach him — but the latter method, he said, has gained in popularity as retailers realize the potential profit margin that exists with products geared toward China’s Jewish community.

But the road to kosher milk was not so easy. Before the cartons premiered in early February, Chinese Jewish leadership — mostly Greenberg and his Beijing counterpart, Rabbi Shimon Freundlich — had reached out to large dairy companies, asking if their operations were interested in producing kosher milk.

The quest produced more questions than answers, as the dairies in China seemed unwilling to subject themselves to the scrutiny the rabbis would require. Did they milk their own cows? Did they buy milk from farmers and just process it on site? What did they feed their animals? Were there any hormones injected?

“At the end of the day, you don’t have just cow milk,” Greenberg said.

Green Yard Dairy Farm, located about 45 miles northwest of Beijing, offers organic fodder, organic raw dairy material, and a complete organic milk production and processing line, according to the company’s Web site. And in the end, that’s the company the rabbis chose.

Freundlich works with the dairy directly, and volunteers his time a few days a month to supervise its operations when it produces the milk that will be frozen and shipped across China, Greenberg said. The milk cartons carry the blue-and-white hekhsher and a statement that the product was prepared “under the strict supervision of Rabbi Shimon Freundlich of Chabad, Beijing, China.”

Neither Green Yard nor Freundlich responded by press time to e-mails requesting comment.

The kosher milk does not come without a price. In fact, the Green Yard milk that Greenberg sells to Shanghai Jews costs about 12 yuan (about $1.75) — a figure that, depending on whom you ask, is between double and quadruple the price of nonkosher milk.

Organic certification can be costly in China, said Daniel Smith, factory manager of Ambrosia Dairy, a small operation that is located in Shanghai’s industrial suburbs and specializes in yogurts and cottage cheese.

“You have to keep your eye on everything,” he said. “Tracking down exactly where everything is coming from, I imagine that would probably incur some extra costs.”

Smith estimated that certification takes about three years, which could help explain why there are no certified organic dairies in the Shanghai area, he said.

Like other Chinese dairies, Ambrosia has received increased scrutiny from the Chinese government since the melamine scandal. Inspectors come in to review the dairy’s operations about once a week, Smith said, and the government has recently cracked down on small startup dairies to make sure they’re adhering to standards.

The only cure for the public’s lack of confidence surrounding the Chinese milk industry is time, Smith predicted.

“I think it’ll be a while before people will be buying China milk products for their little kids,” he said. “If they crack it wide open, and start chopping off more people’s heads, it’ll only make people more worried, like, ‘Oh, God, it’s systemic!’”

In the fall of 2008, reports emerged that thousands of infants in China had developed kidney-related ailments because of high melamine levels in their formulas. It was believed that the chemical had been added to artificially boost the protein count of the formula. By November of that year, the government reported that six infants had died, 860 had been hospitalized and an estimated 300,000 had fallen ill from the tainted formula.

Niemeier said that China has rushed to increase its food-safety regulations in recent years, expanding its efforts in the buildup to the Beijing Olympics and now the Shanghai World Expo, and revamping a food-safety law in June 2009 that had not been touched since 1995.

“Is it perfect? Nobody’s is perfect. … But the gain is far greater from what is accomplished,” he said. “If you can measure something, you can manage it. And you can’t measure something in this business without standards.”

But how it works in practice may be another story.

As much as Greenberg touts the milk development, and Niemeier trumpets increased Chinese regulation, the people at the Shanghai Jewish Center at the start of Hebrew school on a rainy day in March had a lukewarm reaction to the kosher milk.

Elodie Dal Zotto, a French student who is attending school in Shanghai for four months to complete her Master of Business Administration degree, said she thought she might try the milk. After two weeks in China, she’d already realized the difficulties involved with keeping kosher in the country.

“For me, it’s hard. [Price] matters, but when you don’t have the choice,” she said, her voice trailing off. “Except here, there are no places to eat and no places to find anything kosher. It’s not easy to translate and to explain to Chinese people, to ask them if there is no meat. Sometimes you buy something and you are not sure.”

Asnat Meretz, who has lived in China for six months with her family, said that scandals like the melamine incident have prompted her to be more vigilant when deciding which domestic products to buy for her husband and their three children.

And whether she chooses to buy kosher milk is just a matter of practicality and simple economics, she said.

“It depends,” she said with a shrug. “In general, I’m buying very expensive organic milk, so if I knew they had an organic milk which is kosher, and it will be the same price as the other organic milk, I probably will buy it.”