Now It Is Told: An Israeli Story Of Secrecy and Censorship 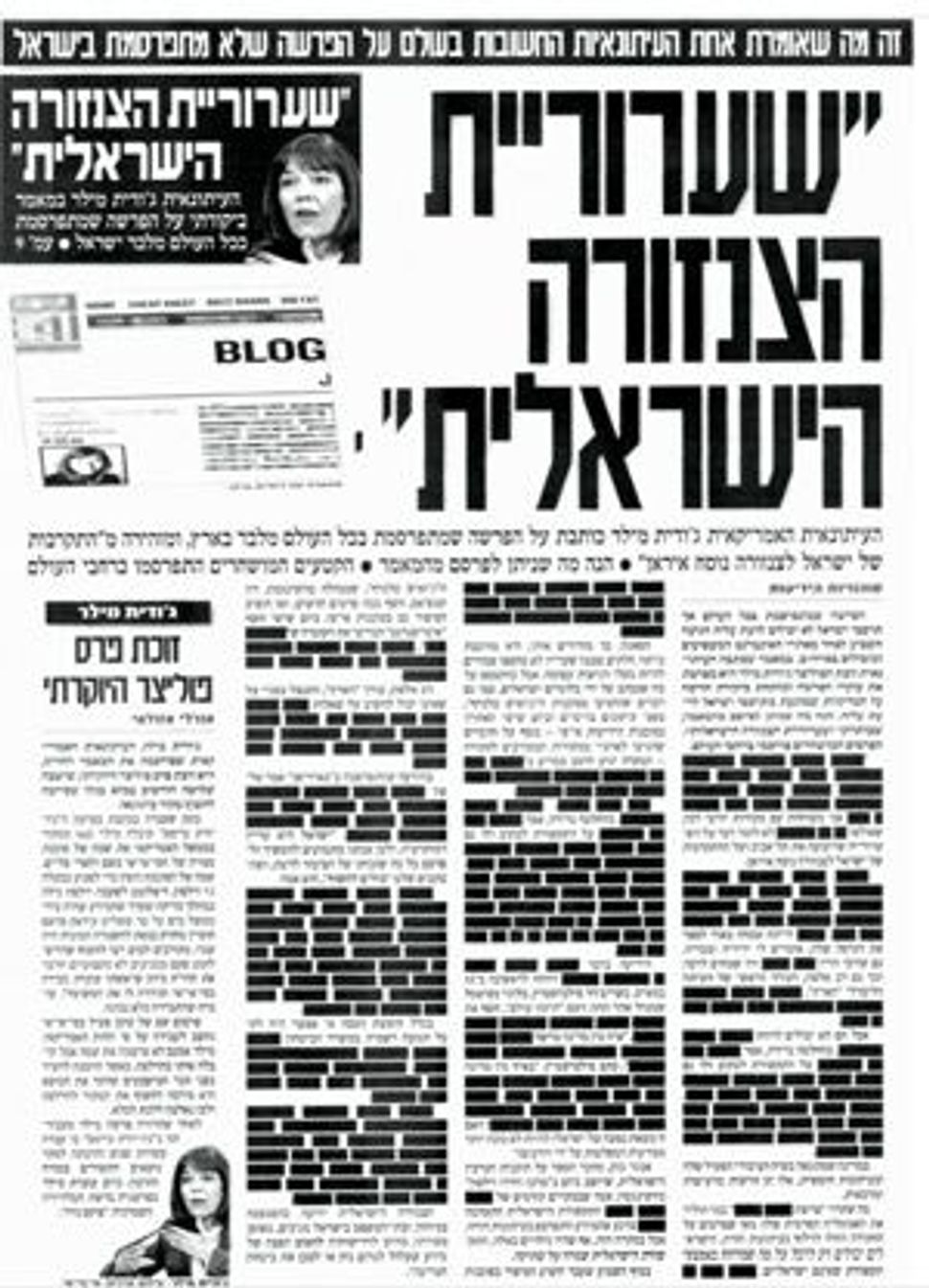 Censored: Yediot Aharonot published a blacked-out translation of a story on Anat Kamm. The article was easily accessible on the Internet.

The story on page one of Israel’s largest daily formed a graphic that was a conversation stopper: columns of print that looked like a series of vertical piano keyboards with thick, irregularly spaced black keys, and a large headline that read, “Israel’s Censorship Scandal.” 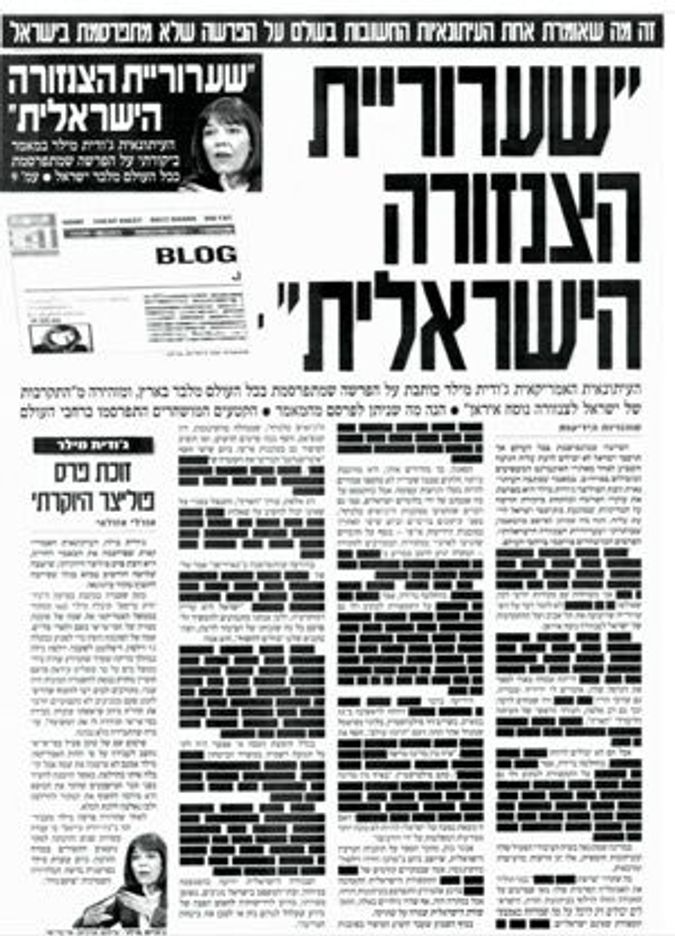 Censored: Yediot Aharonot published a blacked-out translation of a story on Anat Kamm. The article was easily accessible on the Internet.

The article sought to tell the story of Anat Kamm, 23, who has been under secret house arrest for more than three months, with a gag order in place that has prohibited the Israeli news media from reporting on her case, and a gag order on the existence of the gag order, which has kept the media from even discussing her existence or the fact that she is under house arrest.

In fact, by the time Yediot Aharonot published its April 6 story, anybody who reads English and has access to the Internet was able to read about the Kamm affair: about how Kamm allegedly leaked classified documents to an Israeli reporter; about how those documents suggested that the Israel Defense Forces had targeted reportedly unarmed Palestinian militants for assassination in defiance of a Supreme Court order; about how Israeli journalist Uri Blau had published a story in 2008 in the Israeli daily Haaretz based on her alleged leaks, and about how Blau — despite the fact that Israel’s military censor had approved his story — had recently left the country and now sits in London, reportedly fearful of returning.

Yediot’s story, in fact, was a translation into Hebrew of an article by Judith Miller detailing much of this, published several days earlier in The Daily Beast, an online news source. But in Yediot’s version, about two-thirds of Miller’s text was hidden under bars of black ink —deletions forced by the terms of the gag order.

The Associated Press, The Washington Post, The Times of London, The Independent, the Guardian and JTA — the Jewish news service that broke the story in the press — were just a few of the places in which the story had already appeared.

If by publishing the article with its blacked out bars Yediot was hoping to force Israeli officials to at least acknowledge the story’s existence, the paper seemed destined for disappointment. Reached by phone on April 6 for comment about Yediot’s front page, Israeli government spokesman David Baker said that he had never heard of Kamm or any gag order, and that he — the prime minister’s chief press officer — had not looked at Israel’s most widely read newspaper that day.

“I never heard of her,” Baker said curtly.

Haaretz reported on April 6 that in the face of expanding coverage of the case elsewhere, the security establishment was expected to go to Tel Aviv district court the next day and appeal for the gag order to be lifted. The results were not known by press time.

On the shrunken and besieged Israeli left and among the country’s civil libertarians, many cite the Kamm case as the latest in a series of recent events that make them fear for the continued thriving of Israel’s open and free-wheeling political culture. They cite, for example, the police’s repeated breakup of weekly demonstrations protesting the eviction of a Palestinian family in the Jerusalem neighborhood of Sheikh Jarrah despite multiple court rulings that the protests are legal.

In this case, it was the blogosphere — both in and outside Israel, including, briefly, myself — that forced Kamm’s story out of the shadows before any mainstream media would touch it. Israeli blogger Idan Landau was the first to post on the case, in mid-March, disclosing that Kamm had been charged with espionage for allegedly leaking the classified documents. According to Landau and other bloggers, Israeli authorities believe that Kamm obtained the documents while serving as a clerk to Yair Naveh, then head of the Central Command. Some of those documents indicated that the general staff authorized the assassination of unarmed Palestinians, in violation of a Supreme Court ruling, and later claimed falsely that one of those targeted was killed during an exchange of gunfire.

Several bloggers have asserted that these documents were but one of up to 1,000 classified papers that Kamm obtained. But this is impossible to verify in an atmosphere in which government officials fear even to utter Kamm’s name. Kamm, who went into journalism after her military service, isn’t talking, but according to friends, she denies the accusations against her.

Blau cited the assassination-related documents in his story, which was published in Haaretz in August 2008 with the approval of the military censor at the time. The article included scanned images of the relevant pages, with the pertinent bits highlighted and enlarged. Naveh insisted in the story that the killings were legal.

Subsequent blogs reported that Blau had taken temporary refuge in London to escape Israeli security services that now want him for questioning while Haaretz’s legal counsel works out the terms of his return home.

Dov Alfon, editor in chief of Haaretz, did not address specifics in an April 2 statement to the Independent: “Haaretz has a 90-year-long tradition of protecting its reporters from government pressures, and Uri Blau is getting all the help we can provide him with.”

“Uri Blau is in London,” Alfon confirmed to the Guardian. “He will be there until his editors decide otherwise. We are ready to continue to keep him in London as long as needed.”

As Alfon noted in his Guardian interview, Blau has published numerous stories probing the underside of Israel’s security establishment. And like the assassinations story, several have relied at least in part on classified military documents. “All of them are dynamite stuff,” Alfon said of Blau’s stories, “and it is clear, of course, that the authorities are not satisfied with these kind of revelations in a major newspaper. We understand this, but we also understand that Israel is still a democracy, and therefore we intend to continue to publish whatever public interest demands and our reporters can reveal.”

Until Landau, a journalist who writes on Internet-related issues, pushed the “send” button on his blog post, few knew about any of this beyond the small Tel Aviv media world. Landau linked his blog post to his Twitter feed, and it went viral immediately.

But within two hours, Landau removed the post from his blog. In its place was a cryptic message expressing the hope that one day he would be able to explain the deletion.

Over the next two weeks, at least a dozen other Israelis published blog posts, Tweeted and created Facebook pages about the Kamm story. In each case, the post, Tweet or page was taken down within hours.

I am one of the Israelis that deleted a post I wrote about Kamm. As it turned out, Kamm contacted the people who wrote about her in Hebrew, asking them to remove the information. She told them that she had been warned by the security services — the Shin Bet (domestic security) and the military intelligence unit responsible for investigating classified information leaks — that she was more likely to benefit from a plea bargain if the story was kept secret. She did not contact me directly, but the message was relayed by a mutual acquaintance, together with the warning that by refusing to delete my post, I could be responsible for a young woman being sent to jail for a decade or longer.

Like my peers, I was intimidated by the silence that surrounded Kamm’s house arrest, and by the frequent warnings about the gag order — which I have never seen.

It was Seattle-based blogger Richard Silverstein who was the first to write about the story in English, disregarding a warning that he, too, received from one of Kamm’s friends. Now, emboldened by the publicity from abroad, Israeli bloggers have republished their deleted posts in Hebrew.

In late March, Ma’ariv satirized both the gag and the lack of media defiance by declaring: “Due to a gag order we cannot tell you what we know. Due to laziness, apathy and blind faith in the defense establishment we know nothing at all.”

Haaretz and Channel 10 challenged the gag order in court.

One measure of the intimidation and sense of suppression felt by even establishment journalists accustomed to the censor’s restrictions could be seen in an April 4 blog post by Haaretz defense analyst and security expert Yossi Melman. The post’s title was, “I Am a Coward.”

Melman, whose many scoops about Israel’s security establishment over the years have made him a dean of that journalistic niche, took care not to write Kamm’s name in his post. He stressed that he believed in the rule of law. And he acknowledged that he hesitated to blog about the topic even indirectly, lest he be charged with contempt of court.

But he wrote: “In my opinion, there was no justification for issuing a gag order…. Based on my extensive experience as an intelligence and security analyst… this case… does not present any risk to national security.”

Now It Is Told: An Israeli Story Of Secrecy and Censorship