Symposium Seeks To Save Yiddish Dance 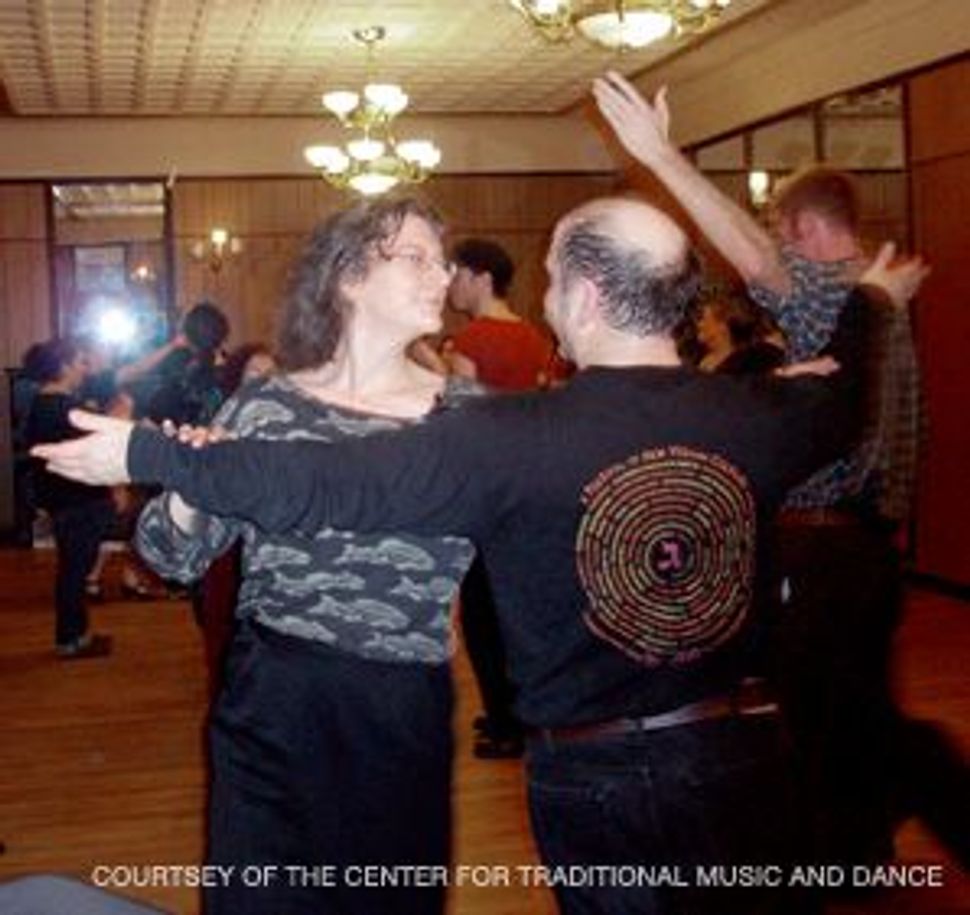 Step to the Rhythm: Some 80 participants gathered for the first-ever Yiddish Dance Symposium. The event included lectures, discussions, live music and a dance party.

Most academic symposia don’t offer a steady supply of cold beer and hot pirogi. Fewer still offer the chance to see Michael Alpert, frontman for the progressive klezmer band Brave Old World, dancing on a chair. The first-ever Yiddish Dance Symposium had both. 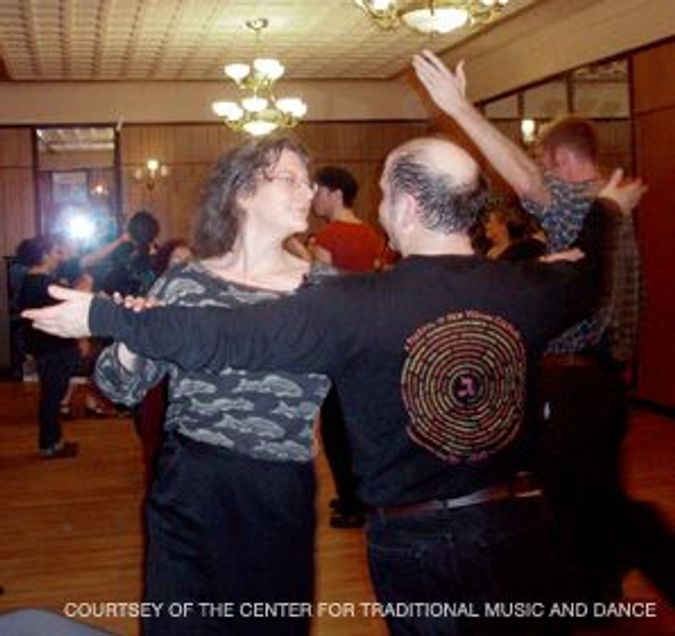 Step to the Rhythm: Some 80 participants gathered for the first-ever Yiddish Dance Symposium. The event included lectures, discussions, live music and a dance party.

The bulk of the symposium, which was chaired by Alpert and by Jewish music scholar Walter Zev Feldman, was taken up by such weighty topics as “Defining Yiddish Dance — Contexts, Genres, Gestures” and “Interaction With Co-Territorial Dance.” A group of some 80 dance ethnographers, anthropologists and devotees of Jewish dance gathered at New York University on December 9, 2007, to ponder the distinctive characteristics of Jewish dance, consider avenues for future research and develop strategies for revitalizing what even its most ardent admirers admit is a nearly defunct art form.

Though it certainly didn’t seem defunct later that evening. After eight hours of panel discussions, the event’s organizers mercifully scheduled a tantshoyz, or dance party, at the Ukrainian East Village Restaurant on Second Avenue. With a trio of klezmer musicians providing accompaniment — and a few ringers like professional dance leader Steve Weintraub providing real-time guidance — a group of around 20 to 30 dancers was soon shuffling counter-clockwise in a classic freylekh, or circle dance. After a brief break for food and drink, during which the musicians serenaded individual tables and Alpert became chairborne, he and Feldman engaged in a kind of dance-off, slapping their heels, stomping their feet and twirling their hands in intricate, wavy gestures.

According to Feldman, that split between simple, communal dancing and virtuosic solo displays is typical of Yiddish dance, also known as Ashkenazic dance. So, too, is a light, erect body posture; an emphasis on upper as well as lower body movement, “from the feet to the tips of the fingers” (hence those hand gestures); a taste for improvisation, and a corpus of specific moves, many of them culled from the wider pool of Northern European dance gestures and assimilated into local Jewish styles from Bessarabia to Lithuania.

Unfortunately, remarkably little is actually known about the specifics of traditional Ashkenazic dance. According to Pete Rushefsky, executive director of the Center for Traditional Music and Dance, which is the principal organization behind the Yiddish Dance Project of which the symposium is but one part, there are relatively few surviving films of Eastern European Jewish dance, and a “complete dearth” of high-quality modern field recordings. That also limits our appreciation of traditional Ashkenazic music, which evolved as an accompaniment to dance.

“Quite frankly, you can’t understand the music without understanding the dance,” said Rushefsky, who also happens to be one of the leading tsimbl (hammered dulcimer) players of his generation. “When you play a bulgar, it’s in 2/4, but the dance is in 6/8,” he said by way of illustration. “So when you start dancing it, you get the sensation that you’re sort of floating — and that helps inform how you play it.” Yet, unlike traditional Ashkenazic music, which has enjoyed a renaissance over the past several decades, Ashkenazic dance has been largely neglected; the stuff you see performed at Jewish weddings owes far more to modern Israeli and Hasidic dance than it does to the dances that would have been performed at Old World celebrations 50 or 60 years ago.

Bringing traditional Ashkenazic dance to a broader audience is therefore one of the central purposes of the Yiddish Dance Project, which has received funding from the National Endowment for the Arts, the Forward Association (which owns this newspaper), the City of New York and American Express. The symposium, which was hosted by New York University, represents the scholarly side of the enterprise. A series of monthly dance parties at the JCC in Manhattan, and more intensive dance workshops at the 92nd Street Y, represent the participatory side. There’s also talk of a DVD or Web site, to be loaded with video clips demonstrating various steps.

Of equal importance is something Feldman calls “the octogenarian project.” Like most research-based initiatives involving vanishing traditions, there’s an element of beat-the-clock to the Yiddish Dance Project: The people with direct experience of traditional Ashkenazi dance, either as performers or witnesses, aren’t getting any younger, and there are fewer of them with each passing year. That’s of particular concern when it comes to the more involved and complex dance forms, which have been especially lightly documented.

“So, you want to get up there?” I asked my friend Jehu as Alpert and Feldman got all jiggy. Jehu and his wife, Leslie, had recently traveled to Germany for a wedding, and they recognized some of the moves being busted at the tantshoyz. (According to Feldman, many Ashkenazic dances have German roots, including the sher, a kind of Jewish square dance that derives from an 18th-century German contradance.) “Um, no,” Jehu replied, as Alpert did a kind of half-split from the knees. Better, perhaps, to focus on the potato pancakes, cabbage rolls and tall bottles of Obolon beer, at least until things had settled down into a nice, comfortable freylekh again.

Symposium Seeks To Save Yiddish Dance