In France, a Jewish Identity 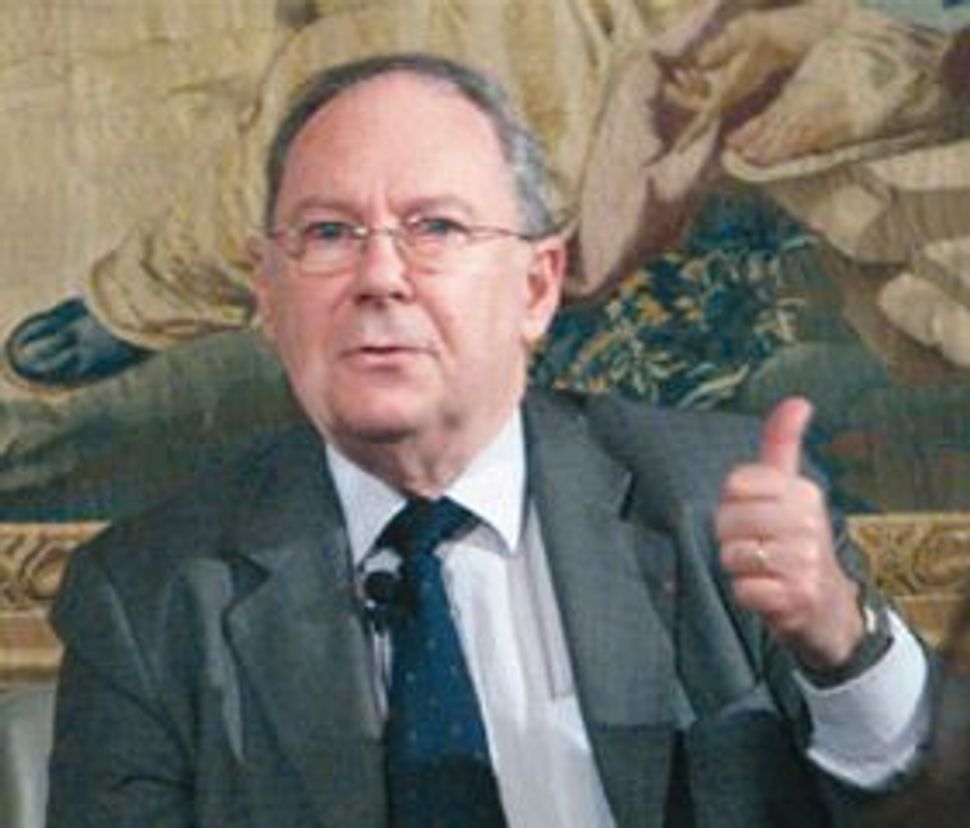 The French Consulate’s wall-size 18th-century Gobelins tapestry depicting the Story of Esther was an apt backdrop for the March 24 dialogue “Evolutions of Jewish Communities in France and the United States,” hosted by France’s consul general, Philippe Lalliot. 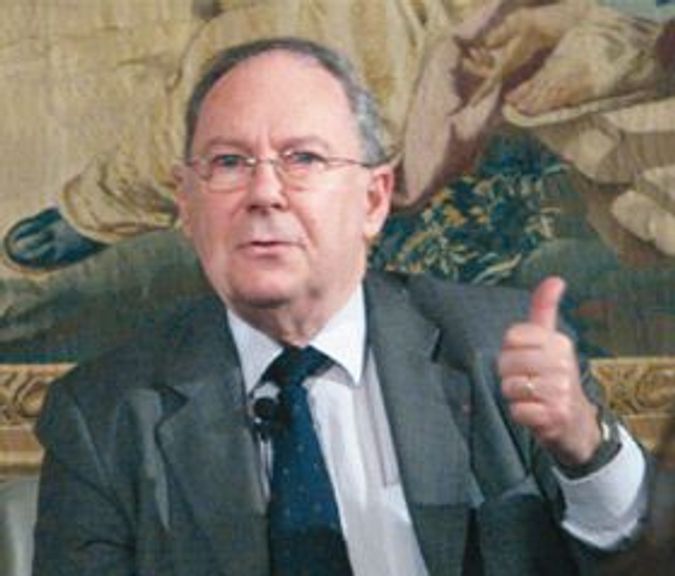 Historic and modern-day antisemitism, and the large exodus to France of North African Jews, was the centerpiece of the discourse between David Harris, executive director of the American Jewish Committee, and Dr. Richard Prasquier, president of the Representative Council of French Jewish Institutions, known as CRIF, an umbrella body comprising 62 French-Jewish groups, originally created in 1944 under the Vichy regime. Responding to Prasquier’s declaration that “France has harsher rules than in the U.S…. [any] expression of antisemitism is forbidden,” and, “French identity [means] in public you are French, in private you are who you are,” Harris served up America’s historic concept of the melting pot. Apropos the ongoing French debate about wearing a headscarf in public, Harris touted “U.S., pluralism… living in harmony [without] objection to dress,” declaring, “The AJC would come out on the opposing side of [France’s president, Nicolas] Sarkozy.”

In a momentary detour from the antisemitism theme, Harris vented his outrage at the “press’s silence” regarding Jordan’s recent withdrawal of nearly 3,000 passports from longtime Palestinian residents. “Have you *heard *anything about it?” he asked rhetorically. “If Israel had withdrawn citizenship of 3,000 Palestinian/Israeli Arabs, every human rights organization would have gone into overdrive!…. Yes! Israel makes mistakes, [but] Israel has the right to be treated no better, no worse, than any other country in the world,” he said.

In his overview of France’s current Jewish community profile, Prasquier (who was born in 1945 in Lodz, Poland), explained: “We do not have a precise number, because of French stringent rules [religious identity is not publicly revealed], but the estimate is 600,000 — 1% of the French population — with two-thirds living in Paris and its environs, and big cities [like] Marseilles, Toulouse, Nice.” He lamented the that there no longer exists a Jewish presence in small cities and, in particular, Alsace, “once the center of French Jewry.” Coincidentally, he informed, “In 1791, France was the first country to give Jews citizenship — in Alsace-Lorraine.” That whereas “in the 1920s… most Jews who fled to France were Yiddish-speaking Bundists and communists… who came for economic reasons,” today’s Jews “are mostly from Algeria, Tunisia, Morocco, and have changed the outlook of the French-Jewish community…. The [Jewish] community today is more religious than 30 to 40 years ago. The Orthodox have the greatest impact.”

“You don’t have to be Jewish to enjoy [the Seder]” declared Rabbi Rolando Matalon, who, with Cantor Ari Priven, led the March 25 American Jewish Committee’s Diplomatic Model Seder, held at Manhattan’s Upper West Side Congregation B’nai Jeshurun. To make the Exodus story and Seder relevant for the diplomatic guests from 61 countries — some of whom were unfamiliar with both the history and the meal — Matalon compared the Egyptian slavery to contemporary oppressive regimes. He explained that the reference to Mitzrayim, or Egypt, is not to a geographic “narrow” location, but to “a narrow oppressive space within each one of us”; that the diminution of the glass of wine — plague by plague —“showed sensitivity to the suffering of your enemy.” Matalon also explained to the diplomats, who represented countries as diverse as Botswana, Bulgaria, Greece, Korea, Mexico, Poland, Rwanda, Sri Lanka, Sweden and Ukraine, that “the Jews worldwide have a commitment to the country in which they live, [yet] a connection with Israel.”

The genesis of the AJC Seder was the 1987 “A Seder of Understanding,” held at Park Avenue’s St. Bartholomew’s Church. As I wrote back then in my review in the English section of the Forverts, that groundbreaking Seder was “strictly kosher for Pesach… the dishes and plastic cutlery were disposable.” In 1988, the AJC’s “Seder of Understanding” was held at AJC headquarters and set the pattern for future diplomatic-outreach Seders. One of that year’s most memorable moments occurred when a member of an Italian-American group told the international guests that in the 1850s, “Italian patriot Giuseppe Verdi wanted to create an opera about “Italian liberation from the oppression at the hands of the Austrians…. Verdi wrote about another captive people — the Jews. The opera was “Nabucco,” about the freedom of the Israelites. But in fact, it was symbolic of the Italians’ search for freedom.”

The March 11 American Friends of Hebrew University Gala Scopus Dinner, held at the Fairmont Chicago, Millennium Park, hotel melded finance, sports and politics. Terrence Duffy, executive chairman of CME Group Inc., was presented with the AFHU Scopus Award. Dinner chair Leo Melamed, chairman emeritus of CME Group, introduced the keynote speaker: baseball aficionado and syndicated columnist George Will. Quoting Will, Melamed pitched his philosophy with relish: “Listen! Baseball, it is said, is only a game. True. And the Grand Canyon is only a hole in Arizona…. Baseball’s beauty; its craftsmanship… is to be loved as much as ballet, or fishing, or politics…. Football is a mistake. It combines the two worst elements of American life — violence and committee meetings.” A beaming Melamed added another sentiment from Will: “Every player should be accorded the privilege of at least one season with the Chicago Cubs. That’s baseball as it should be played — in God’s own sunshine.”

Addressing the nearly 600 guests, Will, in his 40-minute discourse, expounded on why it would be a mistake for either Israel or the United States to take military actions, pointing out that to do so would solidify the Arab world in its anti-Israel actions. Will admonished the American administration for its unfriendly attitude toward Israel, and pointed out that not only is Israel the only democratic state in the Arab world, but it is also the only ally on which the United States can fully depend.

Melamed — whose parents were modest Yiddish teachers— touted Will’s conservative credentials: “He is a staunch political conservative who served as editor for the National Review, launched by his comrade-in-arms, William F. Buckley…. Still, Will’s political views and pronouncements are eminently balanced, often to the consternation of his Republican colleagues.”

Bialystok (now Belarus)-born Melamed and I were childhood friends who received lifesaving Chiune Sugihara visas to Japan as children in Chicago. In our teenage years, we both worked at the Forverts’s South Kedzie office, taking telephone ads in Yiddish. In an aside, Melamed informed me, “Both Terry Duffy and I, as well as, I dare say, most everyone in this audience, would endorse George Will’s assessment that Milton Friedman was ‘America’s most consequential public intellectual of the 20th century.’”

Honoree Duffy was introduced by Gary Cohn, chairman of Goldman Sachs Group Inc. The evening raised $500,000 in support of pediatric medical research at The Hebrew University of Jerusalem, which was founded in 1925 by American philanthropist Felix M. Warburg.

In France, a Jewish Identity