Lost in Translation: From Mameloshn to Belarusian 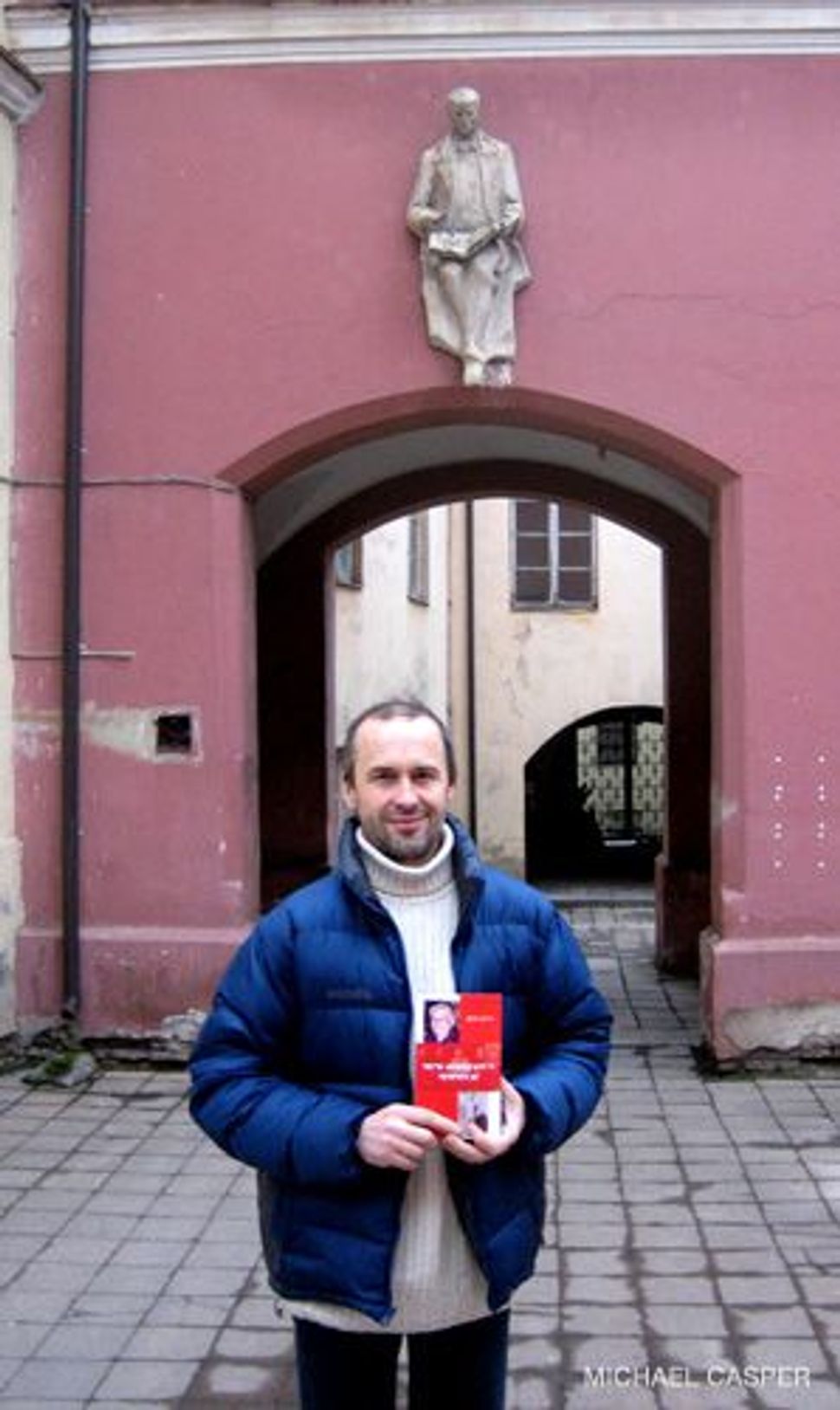 Man of His Word: Aleksander Astraukh edited a 50,000 word Yiddish-Belarusian dictionary, currently on a press in Minsk, Balarus.

Aleksander Astraukh, editor of a 50,000-word Belarusian-Yiddish lexicon currently on press in Minsk, Belarus, admits that his is “not a normal dictionary.” A bridge between two languages equidistant from the mainstream, the book includes in its entries illustrations, idioms, etymologies and citations from the literature of both tongues, which have historically shared large swaths of territory and vocabulary. “It is not for learning perfect Yiddish,” he said. “It is a book to read.” 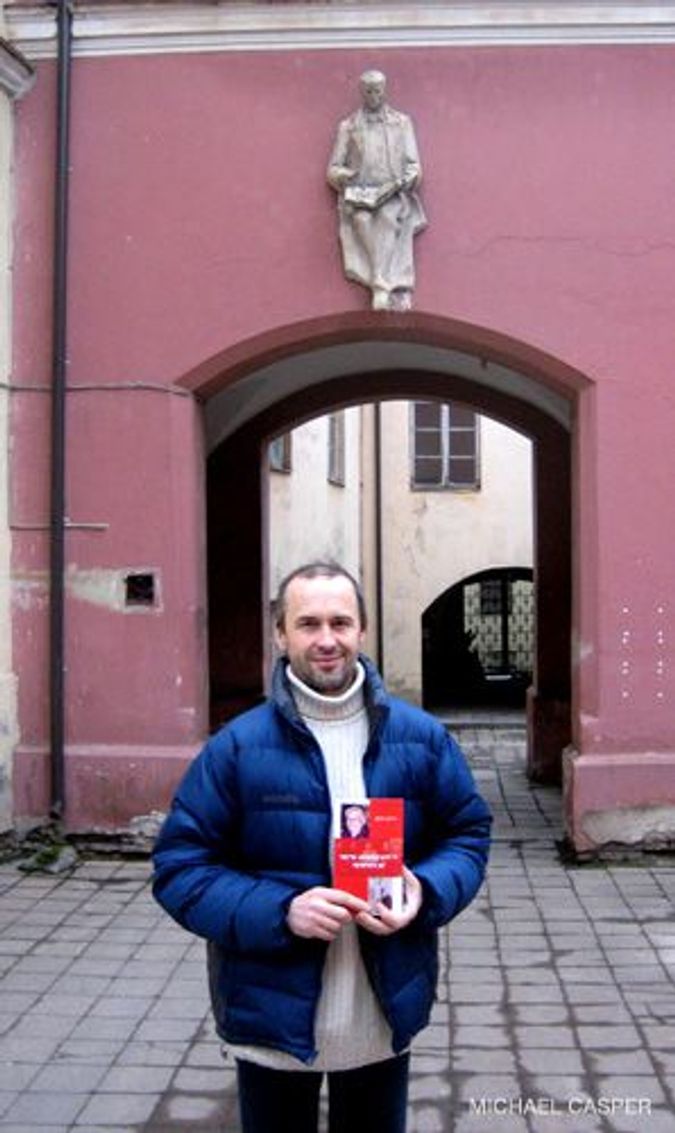 Man of His Word: Aleksander Astraukh edited a 50,000 word Yiddish-Belarusian dictionary, currently on a press in Minsk, Balarus.

A painter and art restorer by training, Astraukh became interested in Yiddish 25 years ago while working on frescoes in the eastern Belarusian town of Amtchislav. There, he and his colleagues were so fascinated by locals’ plaintive Yiddish lullabies that they decided to study the Jewish language as a group in their home city of Minsk. Discovering a new culture and its particular form of expression within the closed borders of Soviet Belarus was an enlivening experience, Astraukh told the Forward last month in an interview in Vilnius, Lithuania. (Astraukh is not Jewish — he is an ethnic Belarusian — but he is married to a Russian Jew.)

Both Belarusian and Yiddish were once widely spoken in the landlocked country of Belarus. Now, the country has a Russian-speaking government, and none of its schools uses Belarusian for instruction. Regular usage of this East Slavic language with a long literary tradition is largely restricted to rural villages, Astraukh said. Additionally, those who promote the language in print might be seen as supporters of the opposition to President Alexander Lukashenko’s government.

Yiddish has also seen a sharp decline. From 1928 until World War II, Yiddish had official status in the Belarusian Soviet Socialist Republic. Although the Belarusian cities of Hrodna and Minsk were once major centers of Yiddish culture, little of this heritage remained after World War II — only a small percentage of Belarusian Jews survived the Holocaust. About 2,000 native Yiddish-speakers were living in Belarus at the time of a 1999 census, but many are elderly and their numbers are diminishing. “Only a few people can speak Yiddish in Minsk,” Astraukh lamented.

Astraukh feels that Yiddish should be a “second official language in Belarus.” He sees Yiddish as an integral part of his country’s unique history. “It should be taught instead of English,” he said.

Astraukh’s tome is not the first Belarusian-Yiddish dictionary. In 1940, Olyeg Khadika, an ethnic Belarusian writer who learned Yiddish on the playground as a child, compiled a cross-reference of the languages. But Khadika’s book was much shorter and, due to Soviet censorship, omitted most religious terminology.

Astraukh’s dictionary will contain words related to religion and literature, but it will lack one feature: the Yiddish alphabet. Although all Belarusian entries will appear in their proper Cyrillic characters, Yiddish words, except for a few from Hebrew and Aramaic, will be written in Latin orthography. It is a sore spot for Yiddish purists, but Astraukh argues that transliteration was “a reality.” It eased his editing process, as until recently, Astraukh’s computer lacked the appropriate software needed to type in Yiddish and Hebrew.

The dictionary was a long time in the making — the manuscript sat in a desk drawer for years. Then two years ago Astraukh met Andrei Gorbyenko, a Russian Jewish businessman who offered to personally fund the book’s publication in an impression of 1,000 copies. A Lubavitch baal teshuvah (one who returns to religion) who was born in Kazakhstan, Gorbyenko lives in St. Petersburg and does not speak Yiddish.

The size of this dictionary, weighed against the relative paucity of Yiddish and Belarusian speakers, still raises the question: For whom is this book intended? Astraukh’s answer: “For me.” Perhaps not a facetious answer, given his explanation that the nature of the project is artistic, not scientific.

But to some, an enormous dictionary that translates between two minority languages and that is meant to be read through like a novel might sound like something out of Soviet-era satirical fiction. Astraukh is hopeful that his work will aid the reading of Belarusian-Yiddish writers, such as the great Moyshe Kulbak, and help keep Yiddish alive in Belarus.

“Every beginning is hard — Yeder onheyb iz shver,” he said, citing a Yiddish expression. “It will be easier. We have a lot of miracles in Yiddish history.”

Lost in Translation: From Mameloshn to Belarusian