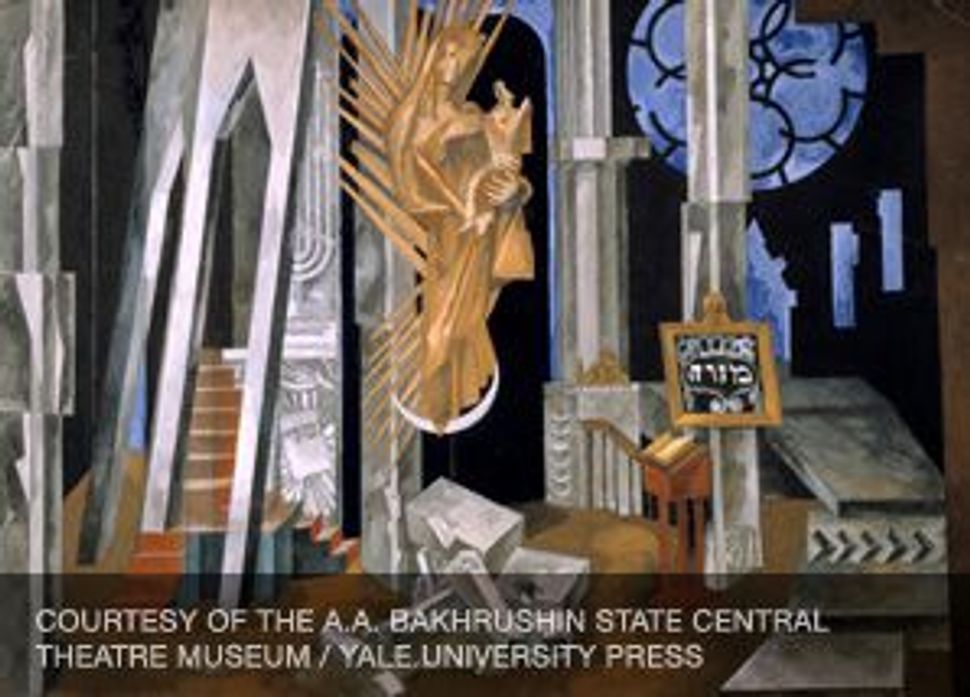 On Set: A stage design by Eugene Nivinsky for ‘The Golem.’

The Moscow Yiddish Theater: Art on Stage in the Time of Revolution 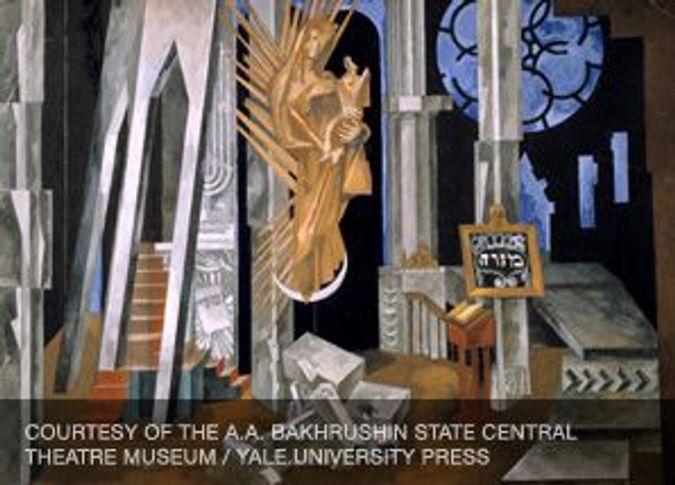 On Set: A stage design by Eugene Nivinsky for 'The Golem.'

In 1992, the Guggenheim Museum collaborated with scholar Benjamin Harshav on an exhibit of Marc Chagall’s legendary set designs for the Moscow State Yiddish Art Theater, known as Goset. Harshav developed his research for that project into “The Moscow Yiddish Theater: Art on Stage in the Time of Revolution,” and indeed this book, like the best of museum exhibits, leaves the reader exhilarated, contemplative and with a new perspective on art. In addition to Harshav’s introductory essays, this work includes photographs of theatrical productions, full-color sketches of costumes and set designs, letters and writings by the artists and by contemporary critics of Goset, and scenes from plays by Sholom Aleichem, lovingly translated by Harshav and his wife and collaborator, Barbara Harshav. More than simply focusing on the history of the Moscow State Yiddish Art Theater, Harshav raises questions about the nature of art and about art’s power in revolutionary times.

The Russian government funded Goset under the leadership of a brilliant 28-year-old director, Aleksandr Granovsky, in Saint Petersburg in 1919. Granovsky hired only amateur actors in their 20s, because, as he wrote, “more than anything we hate in art the artisan smugness of the ‘professional’… their inability to abandon themselves to the joy of creation.” Harshav credits Goset with creating “a mythological Jewish space — a lost fictional world based on the classics of modern Yiddish fiction — and an enchanting typology of Jewish characters.” Granovsky’s trademark was his intricate staging of mass scenes, a practice that reflected the influence of his mentor, German director Max Reinhardt. Similar to what the Yiddish poets expressed a decade earlier, the artists of Goset believed that their art belonged first to the world and did not necessarily have to address Jewish themes. As Granovsky writes, “The tasks of world theater serve us as the tasks of our theater, and only language distinguishes us from others.”

The theater really took hold in the public imagination in 1920, when it moved to Moscow and engaged Chagall to design the sets. Chagall had been ousted as head of a painting school he founded in his hometown of Vitebsk. He went to Moscow looking for work, just as Goset took over a house that the government had confiscated from a Jewish merchant. The group transformed the second floor, creating a stage area in the kitchen and a 90-seat theater in the living room. The actors lived on the first and third floors. After agreeing to design the sets, Chagall locked himself in the theater for several weeks, while the janitor brought him food — bread and watered-down milk — at fixed times during the day. He painted every wall of the space. The day before opening night, he started creating the costumes by painting on rags. He continued painting the actors in costume, adding details to their jackets and faces up until the moment they went onstage. Entirely covered in paint, Chagall did not watch the first performance. The show, “A Sholom Aleichem Evening,” made a huge impression on the audience, and it was performed more than 300 times in Goset’s early years of existence.

Chagall was not prepared for the collaborative nature of theater, however, and would cry when Granovsky insisted on chairs for the audience, feeling the furniture would obstruct his art. Although Chagall only designed the one production, he set in motion the direction, look and feel of the theater’s shows in the decades to come. As critic Abram Efros wrote, “Chagall began a dynasty of artist-designers” for Goset, including Eugene Nivinsky, Meir Axelrod and Itzhak Rabinovich.

The writing throughout the book is dense and full of ideas from distinguished thinkers. Chagall: “For the artist does not copy nature, but creates it, facing it.” Actor Shlomo Mikhoels: “To create means first of all to think… first of all to know….” Granovsky lives his maxim, “Creative excitement knows no national borders.” And as he also believes, “The word is a whole event, a supernormal state of man.” These texts also capture the creative magic and the inevitable accompanying power struggle that frequently surround the realization of great art. Some paragraphs require several reads to fully grasp their meaning. This is not a criticism but an indication of the complexity of the thinking.

Political turmoil surrounded, influenced and ultimately doomed Goset. Granovsky defected during a European tour in 1928 and died in Paris less than a decade later. Goset’s leading actor, Mikhoels, took over, until he was brutally murdered by the Stalinist regime in 1948; the regime then liquidated the theater. “The Moscow Yiddish Theater: Art on Stage in the Time of Revolution” is a layered and textured investigation into one of the most exciting and revolutionary chapters in world-theater history. An inspiring read for artists in the world today — especially those who are considering starting their own theater company — this book is an invaluable resource on art and how it is created.