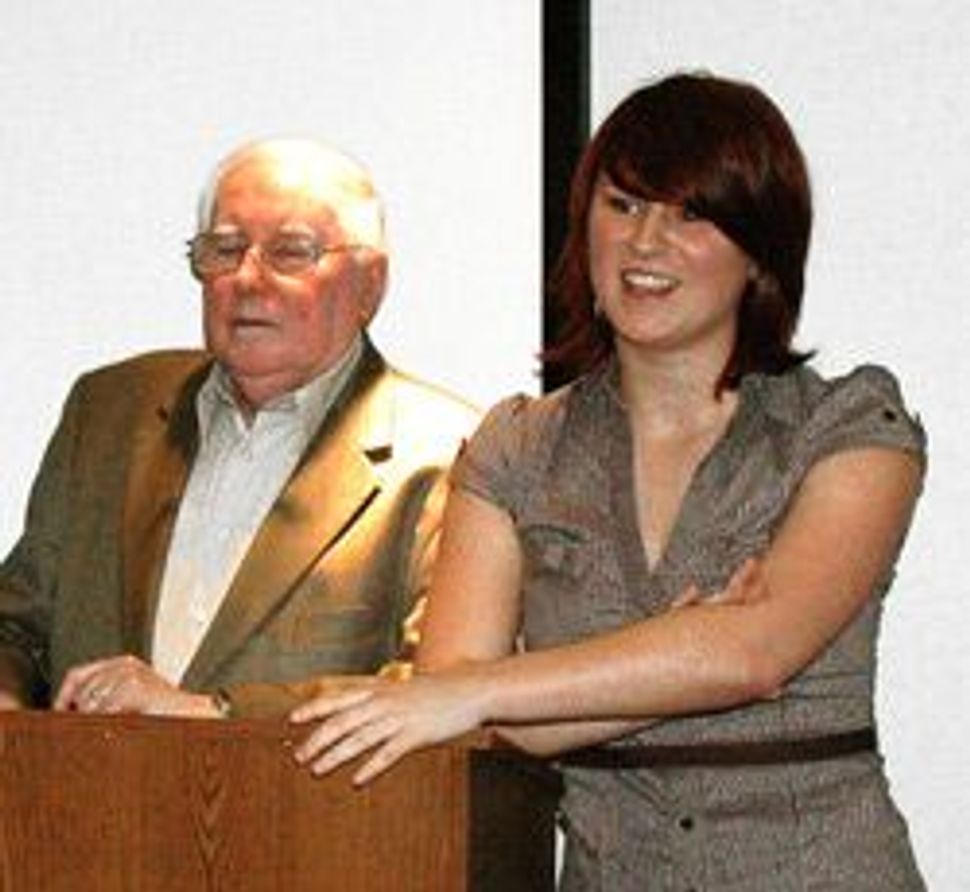 Partners: Sam Weinreb and Anna Theresa Bachmann have come together to spread awareness of the Holocaust. Image by MARK SIMON 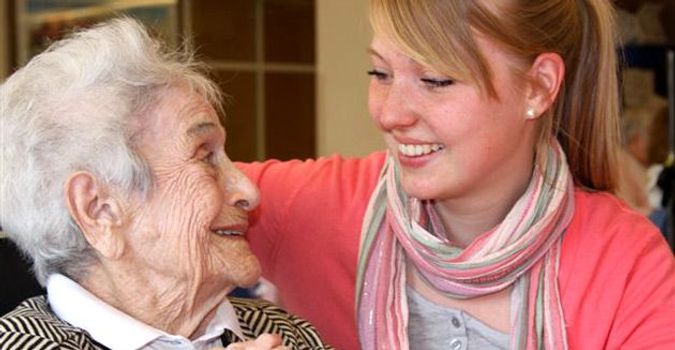 Sam Weinreb and Anna Theresa Bachmann couldn’t be more different. He’s an 80-year-old Holocaust survivor; she’s a 19-year-old German whose grandfather was a member of Hitler’s Waffen SS, which played a leading role in the destruction of European Jewry.

Yet, they share a common goal: They have joined together to give talks about the Holocaust in order to heighten awareness of what happened and ensure that such horrors are never repeated. 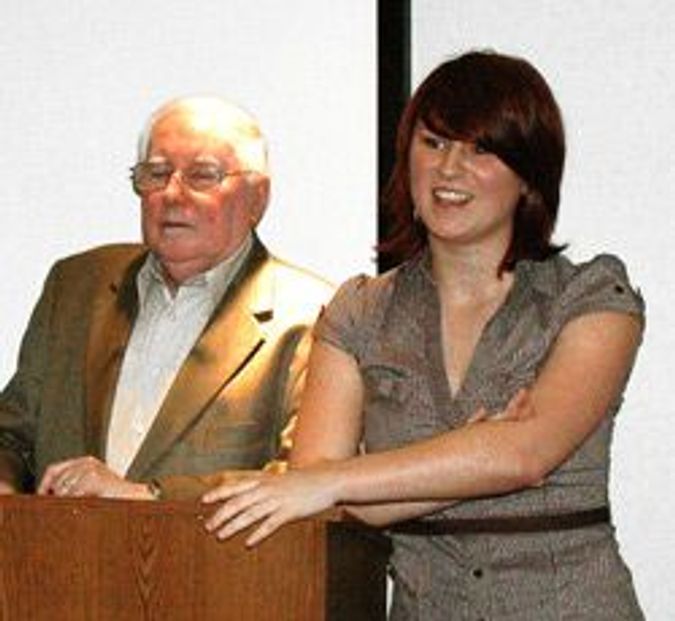 Partners: Sam Weinreb and Anna Theresa Bachmann have come together to spread awareness of the Holocaust. Image by MARK SIMON

The joint presentations take place in West Virginia and Pennsylvania, where, respectively, Weinreb lives and Bachmann is doing a year of volunteer service at the Holocaust Center of Greater Pittsburgh.

Bachmann, like Claudia Jacobs in Boston and Kaja Damelzick in New York, are among 25 German high school graduates currently volunteering in the United States before going on to college. They receive their placements through Aktion Sühnezeichen Friedensdienste, or Action Reconciliation Service for Peace, an organization founded in 1958 by liberal German Protestant Lothar Kreyssig to atone for the Holocaust. Kreyssig, a lawyer and judge, was the leader of Germany’s Confessing Church, which refused allegiance to Hitler.

In addition to their work with Holocaust survivors, the young Germans assist organizations that help the poor, the handicapped and victims of sexual abuse. ARSP sends volunteers to every country that was occupied by Nazi Germany, as well as to the United States and Israel.

These young volunteers must raise money for the program in Germany from between 10 and 15 sponsors, which the group uses to help defray their living expenses in the United States. The volunteers’ housing is paid for by the local organizations for which they work.

In his presentations with Bachmann, Weinreb recounts his daily struggle to survive hard manual labor in Auschwitz with barely any food, and tells of unimaginable suffering. Bachmann, in turn, speaks about how her heightened knowledge of the Holocaust strengthens her opposition to the resurgence of neo-Nazi activities near her hometown in Eastern Germany. She joins demonstrations against such activity.

On a recent morning at the Holocaust Center, Weinreb told 50 teenagers from the Hillcrest Christian Academy, in Bethel Park, Pa., that when he was their age, he was in a Nazi death camp. He spoke to the teens softly and without anger. The 14-year-olds listened raptly as Weinreb explained, “I came home from a bar mitzvah lesson in 1942 and found that my whole family was gone — my parents, my brothers and my 6-year-old sister.”

He found out from a neighbor that the Germans had taken his family from their home in Bratislava, Czechoslovakia. Weinreb was barely 13. Left alone, he faced an escalating war and the mass murder of Jews on his own.

Weinrib told of being imprisoned, beaten and starved, and then deported in 1944 to Auschwitz, where roughly 1 million Jews were murdered. “Near the end of the war, the Germans ordered 6,000 of us to march west toward Germany in the snow and bitter cold,” he said.

Weinreb related that he was one of about only 400 prisoners who survived. The Nazis shot the others dead when they fell from exhaustion.

“I knew I couldn’t go on much longer,” he told the youngsters, “and I wasn’t afraid of dying.” So one night, though under heavy guard, he tried to escape. Exhausted from the march and emaciated at only 80 pounds, Weinreb collapsed while fleeing through the forest. Soviet troops found him unconscious and took him to a military hospital, where he regained his health.

The teenagers gave Weinreb a warm round of applause. None had ever heard a survivor’s story.

“I couldn’t believe that people could be so cruel to one another until I heard Mr. Weinreb’s story,” Dean Hogdon said. Bachmann then told the teenagers about how she was forced to confront her country’s history when she visited Auschwitz and Buchenwald. She said that until she visited the camps, she did not have a German identity. “The Holocaust defined me as a German,” she told the teenagers. “For the first time, I felt responsible for what my ancestors did.”

Bachmann said she was especially struck by the horror of the lingering scent of human hair that had been removed from the Jews and was on exhibit at Auschwitz. “I felt connected to the victims,” she said.

During an interview, Bachmann related that while she wants to know what her grandfather did in the Waffen SS during the war, she is afraid of what she might discover. “I struggle with what to think of him,” said Bachmann, who was 4 when her grandfather died.

Damelzick, 19, another volunteer with ARSP, works in New York for Self-Help, the largest provider of home health care and social services in North America. She visits 28 elderly clients — most of them Holocaust survivors — weekly. Many of them are sick. Many have no one to keep them company. Damelzick reads to them and listens to stories about a past that still torments them.

One of Damelzick’s clients is a 101-year old Jewish woman who is blind and suffers from dementia. A Holocaust survivor from Germany, she barely speaks, but when Damelzick reads poetry in German, she smiles and nods.

Damelzick finds her work an emotional challenge, but rewarding. “I will be one of the last generations who can speak to people who experienced the Holocaust,” she said.

She told the Forward that when she learned of the Holocaust, she felt she needed to do something. “I felt I had to give something back to the Jews, something good,” she said.

She had never met a Jew before coming to the United States. Now she lives with an elderly Jewish woman in Manhattan. “We celebrate the Shabbat, and I go to the synagogue with her,” Damelzick said. “And I went to my first Seder.”

Jacobs, 20, another ARSP volunteer, starts her workday at 7 a.m. at Hebrew SeniorLife, Boston’s largest senior care organization. “Many of them just open their mouths when I serve breakfast,” Jacobs said. “They are too sick to say anything.” Jacobs also participates in occupational therapy programs.

While many successful relationships develop between survivors and volunteers, there are also many survivors who reject the young Germans because of their memories of Nazi atrocities, according to Magdalena Scharf, executive director of ARSP’s U.S. program.

Although originally founded to atone for the Holocaust, ARSP plans to continue even after all the survivors are gone. Scharf points out that the organization’s mission is to strive for a more just society and a more peaceful world. “We are responsible for the past,” she said. “But we must also look toward the future. We want to help shape the future. That means helping those living on the fringes of society.”

That’s what volunteers Sara Tombergs and Lucia Mair do in Camden, N.J., a crime-ridden city. Mair operates a food pantry at a homeless shelter and started a women’s discussion group. Tombergs teaches Spanish and mathematics at a Christian school.

Camden can be a dangerous place, but the young women appear to have found their niche. Recently, two of the homeless people stood with the girls at a bus stop in a drenching rain to make sure they didn’t get mugged.

The volunteers, said Scharf, exemplify ARSP’s founding declaration: “Permit us to do something good.”