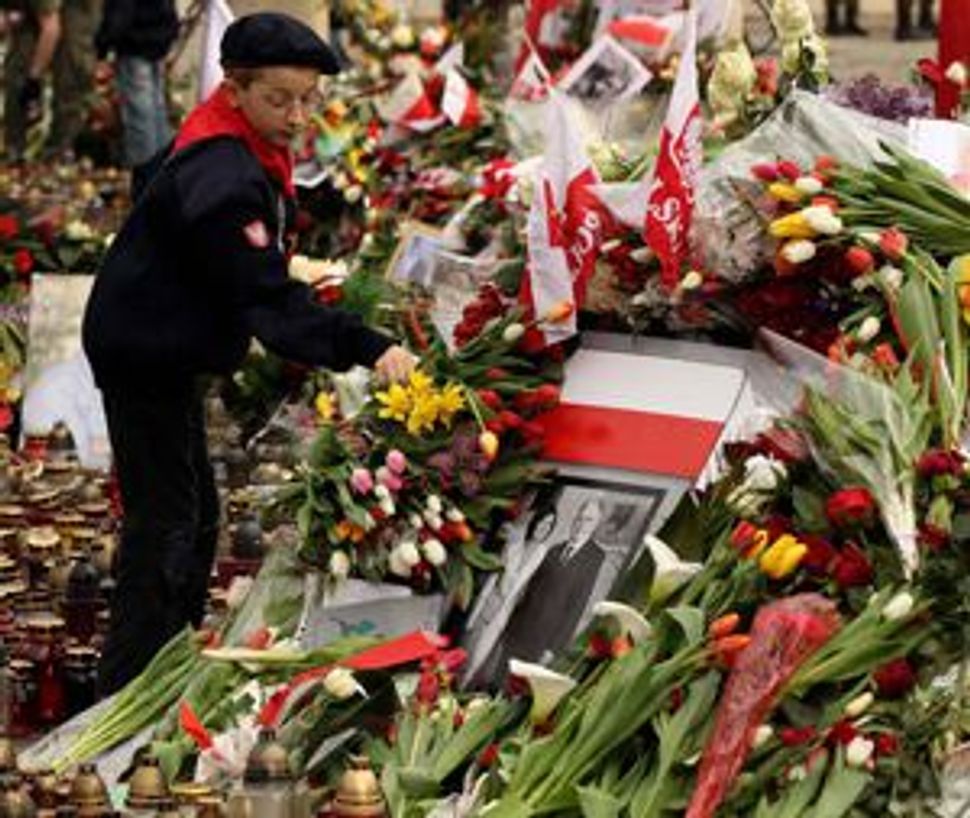 National Loss: A Polish boy scout arranges flowers left by mourners next to a portrait of Polish President Lech Kaczynski outside the presidential palace in Warsaw. The nation was plunged into grief by the death of Kaczynski and dozens other national figures in an April 10 plane crash. Image by GETTY IMAGES

Two years ago, Poland’s president brought its chief rabbi to the Katyn Forest, where in 1940, 20,000 Polish army officers were slaughtered at the order of Josef Stalin. There, the politician insisted on showing the cleric a memorial plaque erected for Rabbi Baruch Steinberg, the army’s World War II-era chief rabbi, who was murdered with all the others.

“It was very important for him to show me this plaque,” Rabbi Michael Schudrich recalled of the commemoration ceremony he attended two years ago at President Lech Kaczynski’s invitation.

This year, Kaczynski invited Schudrich to attend once again as the president and many others in the nation’s leadership prepared to commemorate the 70th anniversary of the mass murder, which Stalin had blamed on the Nazis. The post-Communist Russian leadership had been very reluctant to recognize the real culprits, and a breakthrough had occurred only a few days earlier, when Russian Prime Minister Vladimir Putin joined his Polish counterpart, Donald Tusk, at a separate ceremony at the murder site. Because the presidential commemoration was to take place during the Sabbath, Schudrich respectfully declined — which is why he was not among the 96 victims, including the president and the first lady, when the presidential airplane crashed on landing at the site Saturday, April 10. 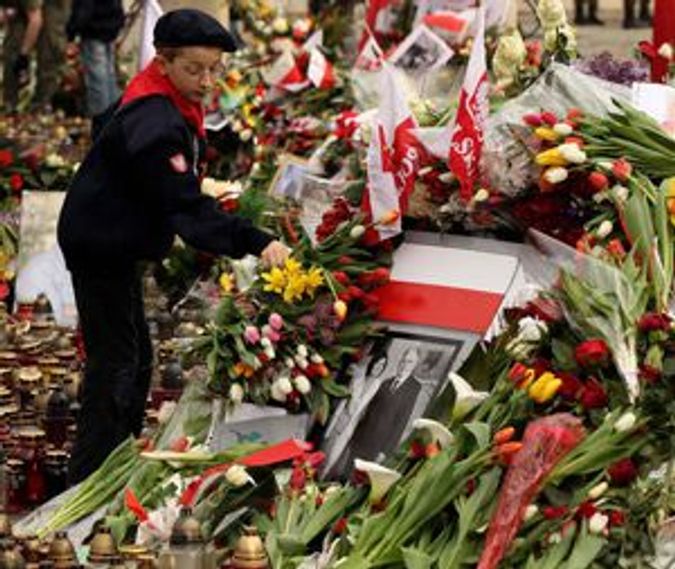 National Loss: A Polish boy scout arranges flowers left by mourners next to a portrait of Polish President Lech Kaczynski outside the presidential palace in Warsaw. The nation was plunged into grief by the death of Kaczynski and dozens other national figures in an April 10 plane crash. Image by GETTY IMAGES

It was thus that Schudrich was able to earnestly eulogize Kaczynski afterward as a fervent friend of Poland’s small Jewish community and of Israel.

Alive, Kaczynski was a divisive and increasingly unpopular figure because of his authoritarian views, with approval ratings recently as low as 32%. But his tragic death has transformed him into a national icon, with all of Poland united in mourning. Polish Jews shared that pain with all other Polish citizens: A memorial service held in Warsaw’s only synagogue was packed full the day after the plane crash.

Kaczynski’s politics were not more popular among Poland’s Jewish community of 8,000 than among Poles at large. But the Jews had real reason to mourn a leader who had shown sympathy and support both to them and to the State of Israel, from the day when, soon after winning the 2005 presidential election, he compared himself to Ariel Sharon.

Indeed, there are analogies between the political philosophies of the two. Both were conservative leaders with strong nationalist feelings and were at the helm of countries they considered threatened by neighbors. (Kaczynski took a dim view not only of the past, but also of the present policies of Germany and Russia.) Both were impatient with what they considered liberal indifference to their respective national traditions and values. And both strongly believed in the fundamental role of the state as the nation’s most valuable institution. Both tended to look at what they believed history’s judgment would be, rather than at public opinion polls.

Kaczynski was far from being the only conservative European politician in power today. Yet it would be difficult to imagine any other European leader comparing himself to Sharon; the public-opinion fallout would be devastating. But Kaczynski had no such qualms. To him, the Israeli prime minister was an inspiration, and Israel a friendly state. Much of Polish public opinion tended to agree with him. No criticism followed his Sharon remarks.

Kaczynski saw Poland as closely aligned with the United States and therefore allied with Israel. His ministers even spoke of a “Warsaw-Jerusalem-Washington strategic triangle,” to the dismay of Arab diplomats in Warsaw and the puzzlement of security experts. He understood that a country in a tight spot must make tough choices. He was the first head of state to visit Israel after the 2006 Lebanon War, and he expressed clear sympathy with Israeli concerns over Iran, saying that “some regimes understand only force.”

But it was not only geopolitics that determined his attitude toward Israel. Raised in a liberal family in the Warsaw intellectual neighborhood of Zolibórz, he saw Jewish friends forced to emigrate in the wake of the communist antisemitic campaign of 1968. He felt, as he would often later say, “anger and shame.” To Kaczynski, the campaign was not only an obviously horrible injustice to its Jewish victims, but also a humiliating smear on Poland’s reputation. The communist masterminds of the campaign, just like the communist murderers in the Katyn Forest, were Poland’s enemies — while Steinberg, executed as a Polish officer, had died for Poland. This is why he so much wanted to show Schudrich the military chaplain’s memorial plaque: It stood for what Kaczynski wanted to cherish and represent — a civic, not an ethnic or ideological, patriotism.

Poland’s Jewish community — a small remnant of the 3 million that lived there before the Shoah — continued to be oppressed until the communists lost power in the historic transition of 1989. The Jewish rebirth in Poland since then was to Kaczynski more proof of the victory of civic patriotism in the post-communist era. During Hanukkah of 2006, Kaczynski became the first Polish president to visit a synagogue, when he came to the Nozyk Synagogue in Warsaw.

His two predecessors had already laid the foundations for Polish-Jewish and Polish-Israeli rapprochement. But earlier in his own career, Kaczynski signaled his positive attitude toward Polish Jewry. It was in 2000, during a time of heated controversy about the 1941 massacre of an estimated 300 Jews in Jedwabne, in which local Poles were ultimately found to have participated. As a national investigative panel probed the matter, Kaczynski, then minister of justice, allowed for exhumation of the Jewish victims of the massacre to be conducted solely in conformity with halachic requirements.

His relations with the Jews were not entirely without conflict, however. He was bitterly criticized for his support for a monument to Józef “Ogien” Kuras, a post-WWII anti-Communist guerilla who also murdered Jews and members of the Slovak minority. Last year, his comparison of the Katyn massacre to the Shoah also generated legitimate outrage.

But both as mayor of Warsaw and as president, Kaczynski was a driving force behind the campaign to establish the Museum of the History of Polish Jews. As mayor, he donated land for the museum; as president, he promoted it at home and abroad.

All this sat uneasily with the more opportunistic policies of his twin brother, Jaroslaw, who from 2005 to 2007 became prime minister of a government under Lech Kaczynski’s presidency. Jaroslaw Kaczynski’s government coalition eventually included peasant populists and extreme-right Catholic nationalists supported by the Rev. Tadeusz Rydzyk, a politically influential priest who runs Radio Maryja, a media outlet widely perceived as antisemitic.

Of the two, Jarosław, who survives his brother, was the consummate pol, while Lech was the thinker and visionary. Jarosław saw no problems in having as his deputy the extremist Roman Giertych, whom the Israeli ambassador officially boycotted. Lech kept his silence, but never gave his overt approval for this alliance.

His Jewish sympathies earned him the scorn of antisemitic extremists, who accused him of being Jewish himself (his “true” name supposedly was Kalkstein); somehow, his brother escaped being thus tainted. Rydzyk brutally attacked the Polish president during a lecture in 2007, accusing him of giving in to Jews, both by allocating land for the museum and supposedly ignoring the alleged threat of Jewish reparation demands. In contrast with his brother, Lech Kaczynski never granted the fundamentalist station an interview. But he had to pay the price for tolerating Jarosław’s alliances. At the funeral last year of Marek Edelman, deputy commander of the Warsaw Ghetto uprising and a hero to the president, Kaczynski stood in silence and alone: The family refused him the right to speak, as Edelman had bitterly criticized the twin brothers’ policies.

Kaczynski was expected to run for re-election — and to lose, for the electorate, not entirely fairly, identified him with the unpopular policies of his twin brother. The elections, to take place in June, will almost certainly be won by the ruling Civic Platform Party’s Bronislaw Komorowski, a liberal and, as speaker of the house, already the deceased president’s constitutional successor.

In March, before the tragedy struck, I was in Stockholm, presenting my latest book on Polish Jewry at the Polish Institute there. After the presentation, a lady introduced herself as Komorowski’s aunt and expressed regret that her nephew was not there that evening. Last summer, the aunt explained, Komorowski had led family members on a tour of former Eastern Polish territories now in Lithuania, from where the family originates. According to his aunt, Komorowski showed a deep knowledge of and interest in the area’s Jewish past. It would appear, therefore, that the tradition of Polish presidents being friendly to Jewish concerns is about to be continued.

Konstanty Gebert is a well-known Warsaw journalist. Contact him at feedback@forward.com