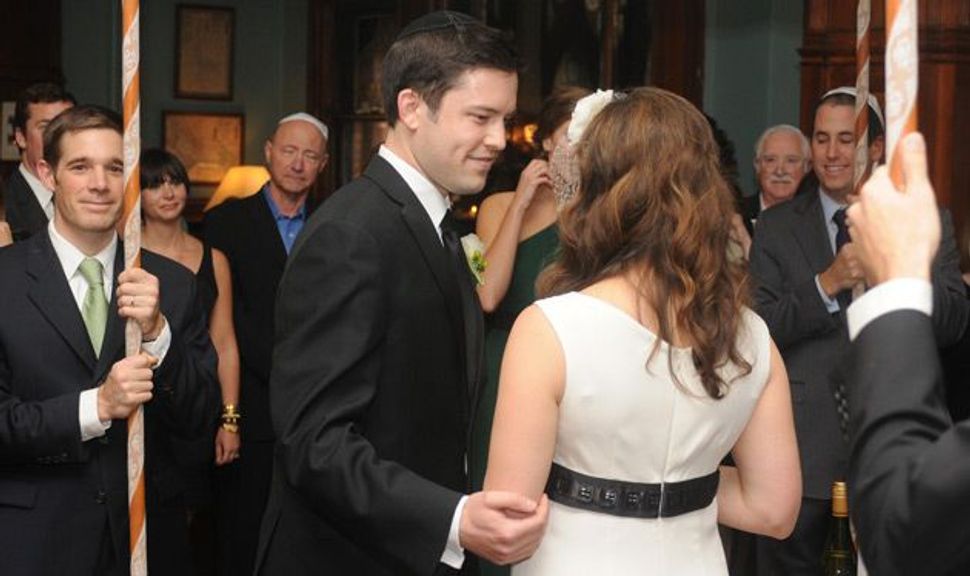 Under the Chuppah: Nathaniel Popper marries Elissa Strauss, whom he met on a Taglit-Birthright trip to Israel. Image by COURTESY OF NATHANIEL POPPER

Now that I have left the Forward to join the reporting staff at the Los Angeles Times, I am no longer faced with the familiar look from old friends when I tell them where I work. “You work for a Jewish newspaper!?” they’d ask incredulously. “I didn’t even know you were Jewish.”

I never figured out a simple response to their disbelief. I generally started with an expression that indicated just how complicated the answer was — raising my eyebrows and nodding my head slowly to acknowledge that neither my goyish features nor my hockey-playing past indicated any particular Hebrew sentiments.

I would also quickly protest that the Forward is not really a Jewish newspaper in the way they probably imagined the term. But that was an evasion of the question. The reality is that I often didn’t even know the answer myself. I began at the Forward with a sort of embryonic, undefined sense of Jewishness, and I leave with a very different sense of my Jewish self, shaped by six years of working alongside Jewish colleagues and friends at the country’s best Jewish newspaper. I figure now is as good a time as any to finally answer all those unanswered questions about why I worked for a Jewish newspaper, and what the experience did to me.

The story starts in my own Jewish homeland — Pittsburgh — and more specifically, the neighborhood of Squirrel Hill, where I grew up. Squirrel Hill, I have learned since starting at the Forward, is one of the last surviving urban neighborhoods in America where all Jewish denominations still live side by side. For a child, it was nothing more complicated than an easily walkable collection of bagel stores and kosher butchers, and newsstands that sold good baseball cards, all anchored by a Jewish community center, where I could go for teen dances and basketball.

My own home was barely Jewish, with one Jewish parent and another Unitarian one — and both of them agnostic. My personal religion was ice hockey, though we would do a watered-down version of most Jewish and Christian holidays. In Squirrel Hill, however, nearly all my friends were Jewish, and as a result my calendar was determined by their odd schedules. Friday night was a slow one when the only social option was a brisket dinner cooked by one of the many Israeli mothers around. The Saturdays of my 13th year were spent listening to the same friends singing foreign words with cracking adolescent voices — followed by awkward gyrating to the Culture Club and the Beastie Boys.

As is said about Israel, simply to live in Squirrel Hill was to breathe Jewish air. I didn’t have to do much to be Jewish, because the subtle rhythms and mores of everyday life were determined by years of tradition.

I didn’t quite realize how this had seeped in until I was away at college, and feeling rather rootless. One day during a parent’s weekend, the father of a fellow student sat in front of me at a lecture. He had the familiar mottled grey beard and rumpled baseball cap of a social worker or sociology professor, and his visceral Jewishness sparked some yearning inside me. When I considered it, I realized that this man recalled the homiest part — or should I say the haimish part — of Pittsburgh.

When I arrived in Berlin after college to begin a yearlong academic fellowship, any Jewish instincts I had were drawn out of me like the remnants of a warm room into a cold winter night. I would confront German acquaintances with my Hebraic-heritage and force them to look at a living Jew in the flesh — something that few of them had ever done.

When I started taking up journalism in Berlin, I was drawn to Jewish topics, like the nascent Holocaust memorial in the center of the city, and the influx of Russian Jews into Germany. This work helped me land a job at the Forward when I came back to New York.

I still remember when then-editor J.J. Goldberg said to me, treading carefully, “This is the part of the interview I always feel uncomfortable with, but I need to ask: Just how Jewish are you?” I answered him honestly, and J.J., to his credit, made it clear that he was more interested in a dogged reporter than in a community insider — but this meant that I began my job covering Jews with little in the way of formal knowledge about the Jewish people and their past. It meant that I came with none of the denominational prejudices and grudges that young Jews often learned at Reform summer camp or from their angry anti-Zionist uncles. But it also meant that in the course of six years, I went through an accelerated Jewish maturation of the sort that any young Jew might experience over the course of decades.

It began, naturally, with anxiety and guilt — anxiety about how little I knew, twinned with a predictable desire to mask that ignorance. When people I was interviewing would drop references to neshama or chillul hashem, I would murmur assent and hope they would not ask me my opinion of the agunot crisis. When they ended our conversation by wishing me a Chag sameach, I would parrot it back, without knowing what it meant. When I ended up at a Jewish religious ceremony as a reporter, I would look down and move my mouth silently, as if I knew all the prayers.

These little embarrassments led to the next stage: information overload. Now that I had my footing, I began learning everything I could, and responding to the anxiety by living the life I had pretended to know. I went to services at a different Manhattan synagogue every Sabbath. Before every holiday, I would consult my reference book from Joseph Telushkin so that I would understand why my editors were wearing canvas shoes or eating cheesecake. During the High Holy Days, I would walk everywhere and buy nothing.

This was the phase in which I started to feel nervous about celebrating Christmas with my family. One year I told them that I had too much work to make it home. At Yom Kippur, I forced myself to fast for the full 24 hours. But eventually I recognized that there was little driving all this effort other than insecurity. During the fast, I just felt hazy and empty — without spiritual regeneration. Hashem and Adonai remained a figure as distant and mythological as Jupiter.

The same disappointment dogged me on a Taglit-Birthright trip to Israel. I arrived with great expectations, only to end up feeling like I was in just another foreign country, different from other foreign countries I had visited only in the alienating expectation that it should feel like home. The more I tried, the more off-putting it all became, until I eventually entered the most classic stage of adolescence: rebellion.

At work I was not a Jewish journalist, I was just a journalist trying to do what any other journalist would do: ferret out hidden information about my beat, which happened to be “the Jews.” Covering a religious event, I would stand off to the side of the people praying and take pictures — not even going the half-step of putting on a yarmulke. This wasn’t such a bad thing professionally. The proper posture of a journalist is skepticism, and I had it.

But there was also a competing instinct, and that came from my day-to-day life, working alongside my brilliant Jewish colleagues at the Forward. Most of them were not particularly observant, either — they had gone through their own periods of Jewish rebellion much earlier — but they remained connected to other parts of the tradition, like Jewish cooking, history and philosophy. Over time, as I became friendly with them, these pursuits would fill the hours of workplace banter. I began to gain back what I lost when I left Pittsburgh and my parents moved away: a Jewish community of funny, smart, witty people whose histories and insecurities I knew and who, in turn, knew mine.

The one religious ritual that backed all this up was the Sabbath meals I was invited to by colleagues — dinners and lunches that would stretch on for hours, with nothing to do but eat and talk about things serious and unserious alike. This was the one religious tradition I could tap into and appreciate: a desperately needed time of rest and rejuvenation and, most important, community.

And then, I had a partner. Remember that Birthright Israel trip? While it had not yielded any Zionist fervor, it had introduced me to a young woman who has become my wife. As we danced toward marriage, she gave me a Jewish sounding board to bounce off my ideas. She liked synagogue, allowing me to confirm that I still did not. She also liked Yiddish, giving me someone to talk about my newfound love for Isaac Bashevis Singer.

I found myself responding to her ideas about Judaism not out of insecurity, but rather out of experience, having tried and discarded many things. I felt comfortable deciding which parts of the tradition made sense to me. I could join my family’s Christmas festivities without guilt, as an important part of my past and my family.

As my wedding approached, I wanted a Jewish ceremony as long as it had elements that felt comprehensible and meaningful to me. Our siblings held up the handmade lace chuppah over a carpet we brought from home and stood on with our rabbi. We asked all our guests to read the seven blessings in unison. Hearing all those voices together was one of the closest things I’ve known to a religious experience.

Since the wedding, we haven’t gone to synagogue, but we have bought Robert Alter’s translation and commentary on the Torah. Each Saturday, we read the portion after breakfast and shout out an interesting passage to each other. “Hey — did you see this about how English has one word for ‘lion,’ and Hebrew has four?”

We also bought the Steinsaltz translation of the first book of the Talmud so that we could begin to experience the most time-worn example of Jewish critical thinking.

As I move into my life after the Forward, it is this critical tradition — the reading and conversation — that is the very core of what continues to resonate for me. Along the way, I’ve often looked out at other ethnic communities and their newspapers, and noticed how virtually none of them has anything like the Forward, a newspaper that questions the community rather than cheerleads for it. The Jewish community is unique in this willingness and ability to support a newspaper that insists on asking hard questions.

That ideal, which I’ve learned so well at the Forward, is one that will serve me well as I move into a wider world with some grasp of the moving puzzle pieces that make up my identity. While no one will be asking me that old question — “You’re Jewish?”— anymore, now I at least have some sense of the story that is the answer.