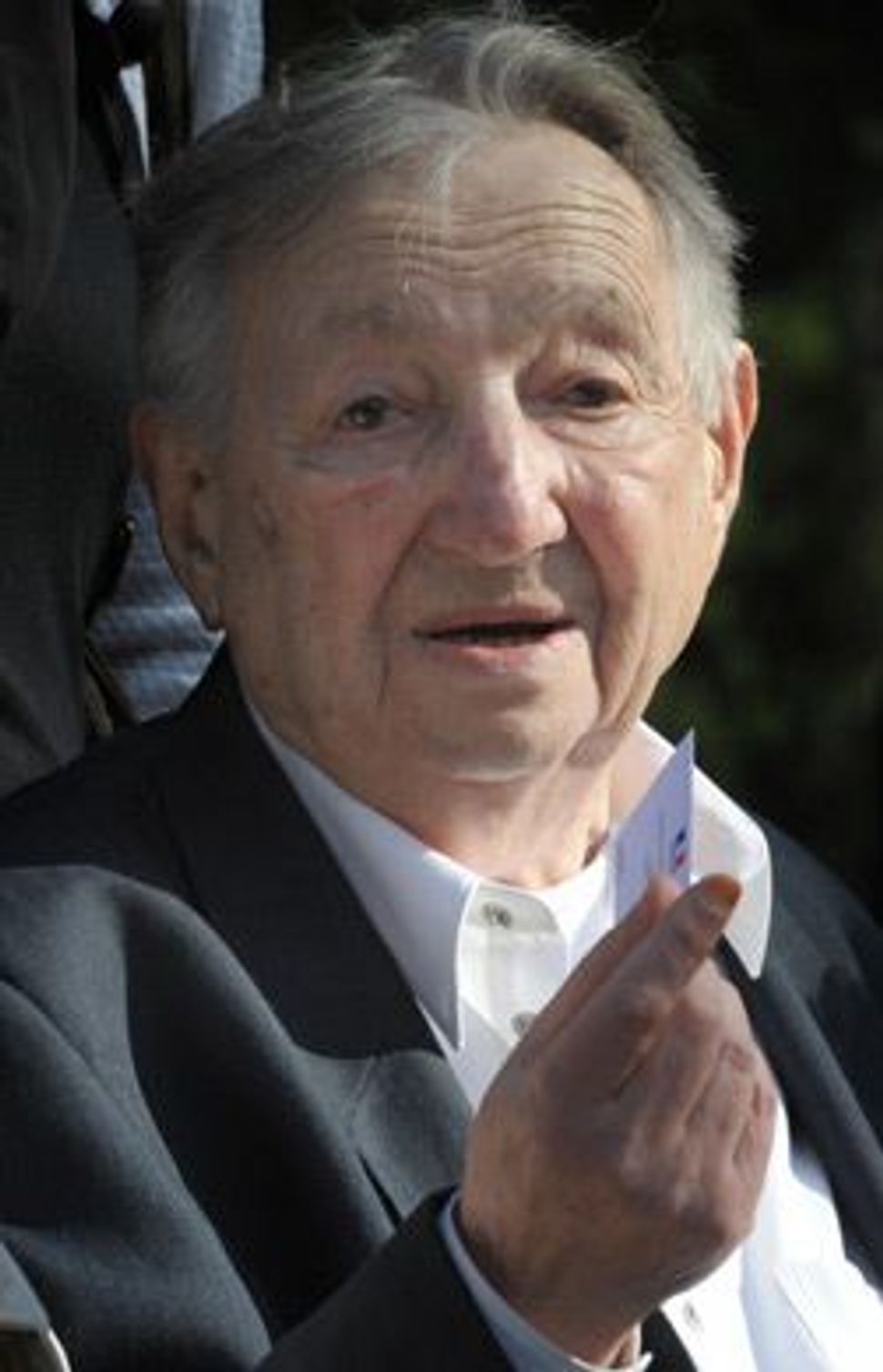 The Last: Marek Edelman, a commander in the Warsaw Ghetto Uprising Image by Getty Images

No Words: Mourners gather in Warsaw to commemorate Marek Edelman, shortly after his death in October 2009. Image by Getty Images

Hundreds of young people, mostly non-Jews, milled around Warsaw’s Jewish cemetery on a sunny spring day, slightly unsure about what they were supposed to do next. Their schools had sent them there April 19 in response to an appeal by a number of Jewish and civic organizations. They had come to honor the late Marek Edelman, the last surviving commander of the Warsaw Ghetto Uprising, on the anniversary of the beginning of the 1943 revolt — and to carry forward a tradition of his.

Edelman’s passing last October provoked nationwide mourning in Poland, with the official ceremony honoring Edelman attended by the country’s top leaders, including the then-president, Lech Kaczynski, who himself would perish in a plane crash only half a year later. Edelman’s family did not allow Kaczynski to speak at the ceremony, since the deceased had been a foe of what he considered to be the illiberal policies of the conservative president. So the president stood there, head bowed, silently honoring a Jewish and Polish hero. 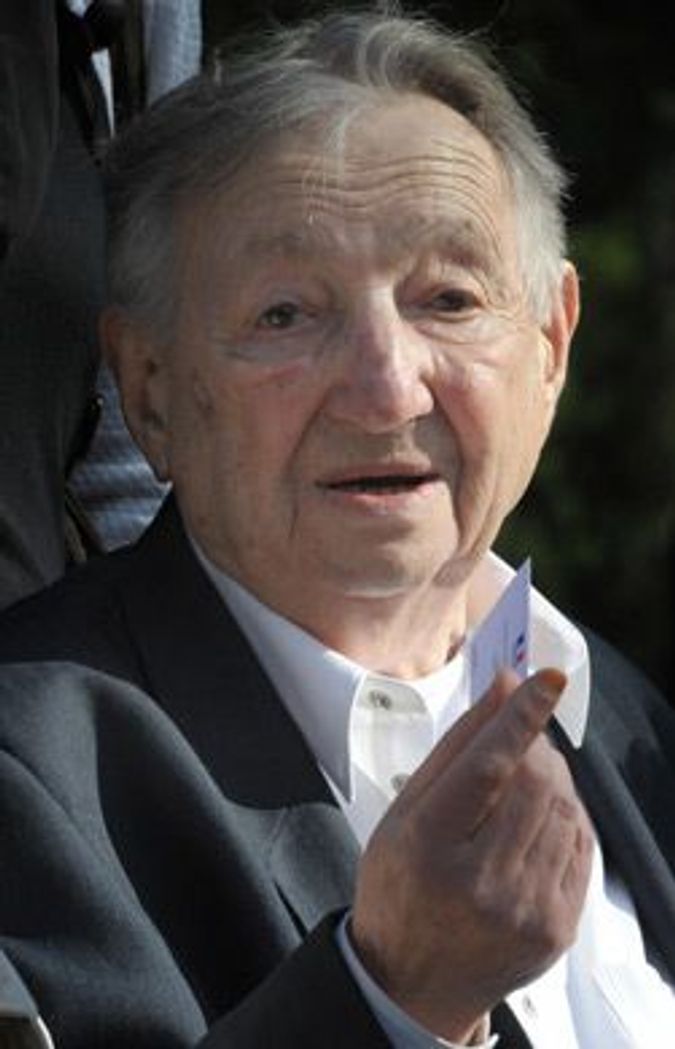 The Last: Marek Edelman, a commander in the Warsaw Ghetto Uprising Image by Getty Images

Every year since the immediate postwar period, Edelman had commemorated the anniversary of the Warsaw Ghetto Uprising his way, by boycotting official ceremonies organized by the Communist regime. Over the years, and especially in the dark period of the 1980s, when Poland was under Communist military rule, dozens, at times hundreds, would join him, in remembrance of the dead, and in defiance of the government. After 1989, in the newly independent and democratic Poland, the custom oddly continued.

Though Edelman had been a militant activist of the ultimately victorious Solidarity movement, he refused to accept that any government — left or right, Polish or Israeli — had the right to speak in the name of the dead. Nor did he try to speak for them: At the ceremonies that grew around him, there were usually no speeches. One rare exception occurred under military rule in 1983, when Solidarity activist Janusz Onyszkiewicz read out loud a letter of support from the movement’s leader, Lech Walesa, and was promptly arrested by the authorities for the act. (After the fall of communism, Onyszkiewicz became independent Poland’s first minister of defense.)

The democratic authorities of post-1989 Poland recognized and respected the “Edelman ceremonies,” as they became known, and timed their own appearances at the monument to the ghetto uprising so that they would not disturb the aging resistance leader, who would appear there each April 19 exactly at noon, always with a bunch of yellow flowers in his hand. It was clear that he had more right than anyone else to be there, and precedence was duly given. His ceremonies had become a major event for the newly renascent Jewish community, but also for society at large — Jewish pride joining civic activism, in a bond of shared contrarian spirit.

Edelman had by then become a hero for Jews and Poles alike — albeit a somewhat problematic one. Jews often did not appreciate his militant atheism and, true to his Bundist roots, his radical criticism of Israel (though Palestinians got little comfort from his unequivocal condemnations of terrorism). Poles were often less than happy with his blistering attacks on Polish nationalism and on the country’s authoritarian tendencies. Yet his popularity grew unabated: Three major books — two of long interviews with him, one of his memories of love in the ghetto — were published in Poland in the last two years of his life alone.

The high school kids and others who gathered on April 19 had come to the cemetery on Okopowa Street to honor Edelman’s memory. But we faced a difficult dilemma: How do you honor someone without ceremonies? Without speeches? Without someone telling you what to think? If Edelman had taught us something, it was that no one has the right to lay claim to the dead for his or her own purposes. “I will not say Kaddish,” Poland’s chief rabbi, Michael Schudrich, told me by Edelman’s grave. “Marek would not have liked that.” (Schudrich said Kaddish later that day, at the ghetto monument.)

The plan was to meet at Edelman’s grave half an hour before the official ceremonies would start at the monument, and then to slowly walk there, symbolically taking Edelman with us, so we would reach the monument when the ceremonies were already over. No, the idea was not to boycott but to keep our distance from any official commemoration, to show that nobody owns the dead, and nobody can really speak in their name. Edelman was always silent at the monument, and so we would be, as well.

On the way, I spoke with some of the high school kids who participated. The Janek Bytnar high school from Lodz, named after a Polish World War II resistance hero, had sent two classes of students, carrying their school flag. Ania, one year away from completing high school, said that the visit to Warsaw was the best Polish history lesson she ever had.

“It’s embarrassing, but it took the death of a Polish hero for me to visit a Jewish cemetery for the first time,” she said. “And there is one in Lodz, as well, and I’ve never been there.”

I asked her whether she thought it was strange that a Polish hero was buried in a Jewish cemetery.

“Well,” she replied, “he was a Jewish hero as well, right? That doesn’t make him less Polish. I mean, I’m Catholic, but Polish, too.” Somebody else in her group nodded.

These are the young people Edelman had dreamed of, finally free of the almost reflexive antisemitism of so many of their elders. To be sure, Ania still does not represent the majority of people her age — but neither is hers the voice of a small minority.

We waited at the monument as soldiers snapped to attention, bugles played and drums rolled. Then we laid our flowers and stones, and continued. At the plaque commemorating Shmuel Zygelboim, the Bundist member of Poland’s parliament in exile who committed suicide in May 1943 to protest the Allies’ indifference to the fate of Polish Jewry, a youth choir sang “Di Shvue,” the anthem of the Bund. There was not a Jew among these young singers, who came from a college on Poland’s border with Belarus. But they knew what they were singing and why — and the kids from Warsaw and Lodz knew who Zygelboim was. We stopped again at the monument at Mila 18, on the site of the bunker in which the leaders of the uprising committed suicide when surrounded by the Germans. Finally, we came to the Umschlagplatz monument.

This is the place from which up to 300,000 Jews were taken to their deaths in Treblinka. A simple wall lists hundreds of their given names. My grandmother Zofia is among them. “Look,” I heard a girl whisper to someone, “there’s a Dorota, just like me.”

Marek Edelman would have liked this crowd.

Konstanty Gebert is a well-known Warsaw journalist. Contact him at feedback@forward.com