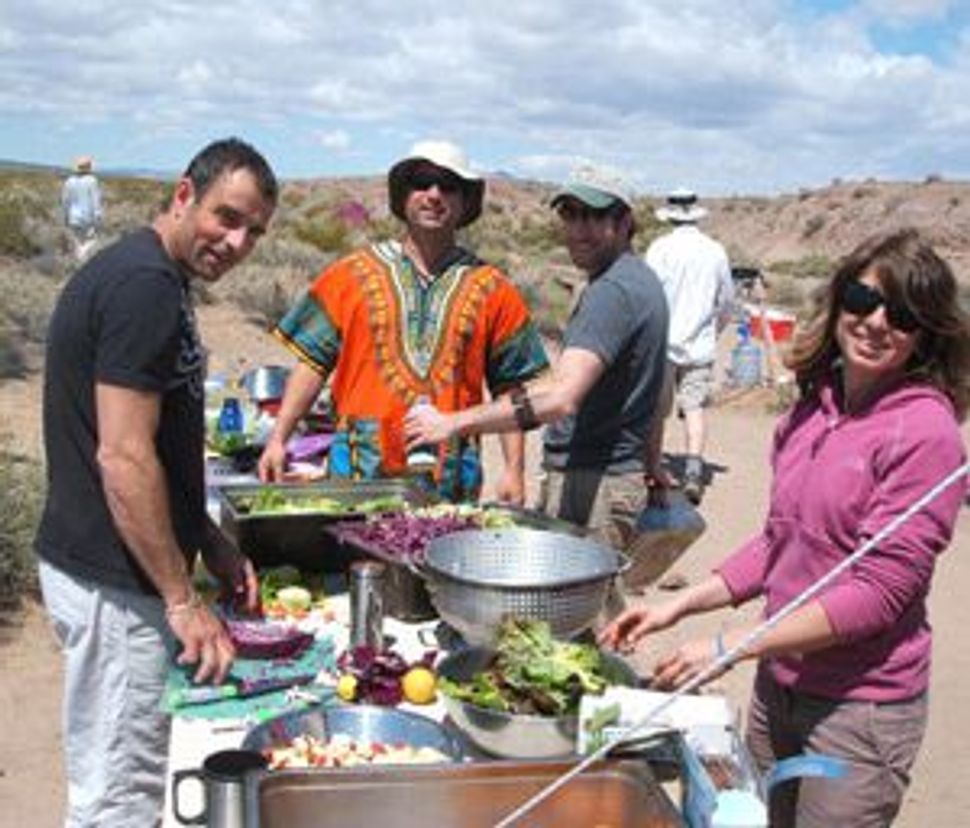 Great Outdoors: Participants of Passover in the Desert make lunch at the Ibex Wilderness in California. Image by wilderness torah

Passover in the desert. Shavuot on the mountaintop. Sukkot on the farm. The three primary festivals of the Jewish calendar weave their rituals and stories around very particular settings. How would our understanding of Judaism change if we made these spaces, as well as these times, holy? This is the question that Wilderness Torah, a new California-based Jewish organization devoted to both spiritual and ecological rebirth, seeks to answer. 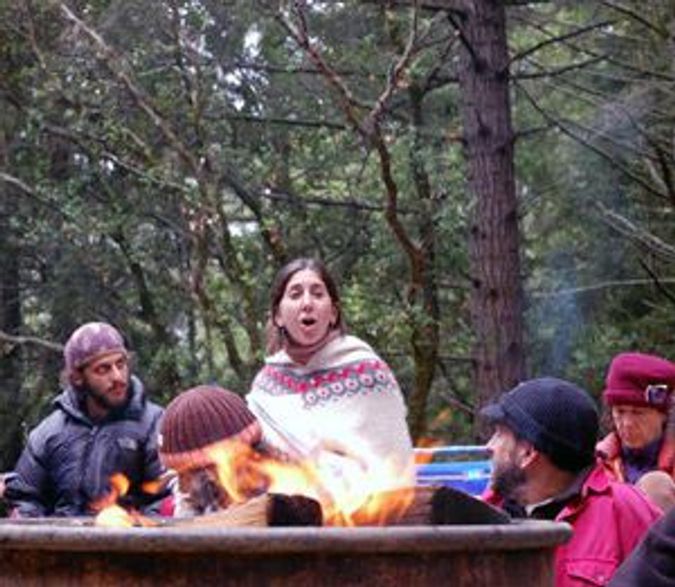 On Shavuot, the evening of May 18, Wilderness Torah will gather 75 Jews at Mount Tamalpais in Marin County, Calif., to celebrate bikkurim, the harvest of the first fruits. Participants will build an altar on which they will lay some barley to celebrate the end of the counting of the omer, a Torah-based agricultural instruction to count 49 days between Passover and Shavuot, the time of the barley harvest. They will then build a bonfire, pray the evening service together and hold an outdoor tikkun leil shavuot, an all-night study session. At dawn they will be joined by worshippers from the communitywide all-night study session hosted by the Jewish Federation of the Greater East Bay. These worshippers will bring a Torah up to the mountain so that the combined group can pray and can read the Ten Commandments.

Shavuot on the Mountain, like Wilderness Torah’s signature event, Passover in the Desert, combines contemporary Jews’ search for a personal, more spiritual Judaism with an ancient communal tradition in a setting where the focus will necessarily be on the natural world. Wilderness Torah’s goal is to ask what ancient Jewish tradition can tell us about the earth and how we can return to a land-based, sustainable living system.

“I personally had been looking for a way into Judaism that felt authentic to me… and I’ve always felt more spiritually alive outdoors,” explained Julie Wolk, Wilderness Torah’s founding co-director. “So for me, to discover the earth-based roots of Judaism and put them into practice in a modern context was life-changing. So much so that I’ve been inspired to bring this work to others who might also connect to Judaism through the earth, and connect to the earth through Judaism.” 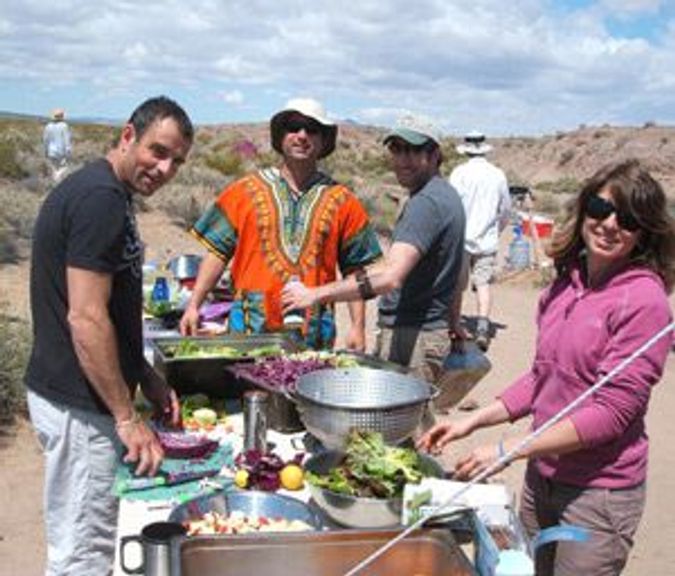 Great Outdoors: Participants of Passover in the Desert make lunch at the Ibex Wilderness in California. Image by wilderness torah

The Bay Area attracts those who, like Wolk, want both to live in a city and take a day trip to beach, woods or mountain. That’s why Robin Braverman, coordinator of the East Bay community tikkun leil shavuot, decided to break with tradition and find a way for those who had studied all night in Oakland to take the 45-minute drive to Mount Tamalpais. Braverman worried that if she didn’t facilitate such a connection, Bay Area Jews would choose the mountain rather than the city.

Not every city has a mountain nearby, but this emphasis on reconnecting to the environment is not only a Bay Area phenomenon. The Isabella Freedman Jewish Retreat Center offers Adamah, a three-month fellowship that integrates organic farming, Jewish learning and contemplative practice. The Teva Learning Center hosts Yitziah, a Jewish teen wilderness backpacking trip. In Denver, Rabbi Jamie S. Korngold offers a Shabbat on Skis event that combines experiencing the natural world with Jewish spiritual practice, while in Arizona, Rabbi Mike Comins runs the TorahTrek program, which, its Web site tells us, “explores the connection between inner and outer geography.” And a number of writers, particularly Ellen Bernstein, have suggested that Judaism cannot be understood outside of an ecological framework.

Nor is an emphasis on “back-to-nature spirituality” new. The idea that we can find religious inspiration in the natural world dates to William Wordsworth and the Romantic period. In the United States, Native American traditions often form the basis for belief that nature gives us the best access to God. In Ashkenazic Judaism, the 18th-century founder of Hasidism, the Baal Shem Tov, is known for wandering in the wilderness, feeling a special closeness to God when he was in the natural world.

Where Wilderness Torah departs from both its predecessors and its contemporaries is in the organization’s emphasis on what Rabbi Gershon Winkler has termed “indigenous Judaism,” a Judaism drawn explicitly from the biblical era. What drives Wilderness Torah — unlike other Jewish environmental movements like Hazon or the Coalition on the Environment and Jewish Life — is co-founder Zelig Golden’s belief that to revitalize both Judaism and a Jewish ecological awareness, Jews need to reach all the way back to biblical times: “When the rabbinic period began, we became disconnected from the land; we became the people of the book. While cherishing and learning from our written tradition, in this time of growing concern about the land,” Golden told me, “we need to reach back to our deep roots to the land and bring that forward to the concerns we have in the modern world.”

It’s not clear what living biblically would mean to Golden. Should Jews return to polygamy and monarchy? Abandon the professions and become nomadic herders (Genesis) or farmers (Deuteronomy)? It’s easy to dismiss the idea of a return to biblical Judaism as mere nonsense. Yet the effort to marry Jewish religious practice to a wilderness environment is also more than Camp Ramah for adults. By insisting so firmly on the connection between nature and Jewish practice, Wilderness Torah may pose a challenge to synagogue-based Judaism.

Though Wolk and Golden contend that their programs supplement what happens in a synagogue setting, their vision is of a Jewish practice inseparable from the earth. Taking their arguments a step further, Jews — even those outside Israel — would welcome the new moon standing under a dark sky, end the Sabbath with a blazing bonfire, and celebrate Sukkot on a farm where the participants have themselves worked the land and harvested the fruit. In their dreams, the creators of Wilderness Torah would go backward to go forward, returning Jews to an ancient land-based past in order to create a more ecologically aware and more spiritually alive Jewish present.

But first, they will climb a mountain.