Holocaust Remembrance at a Distance 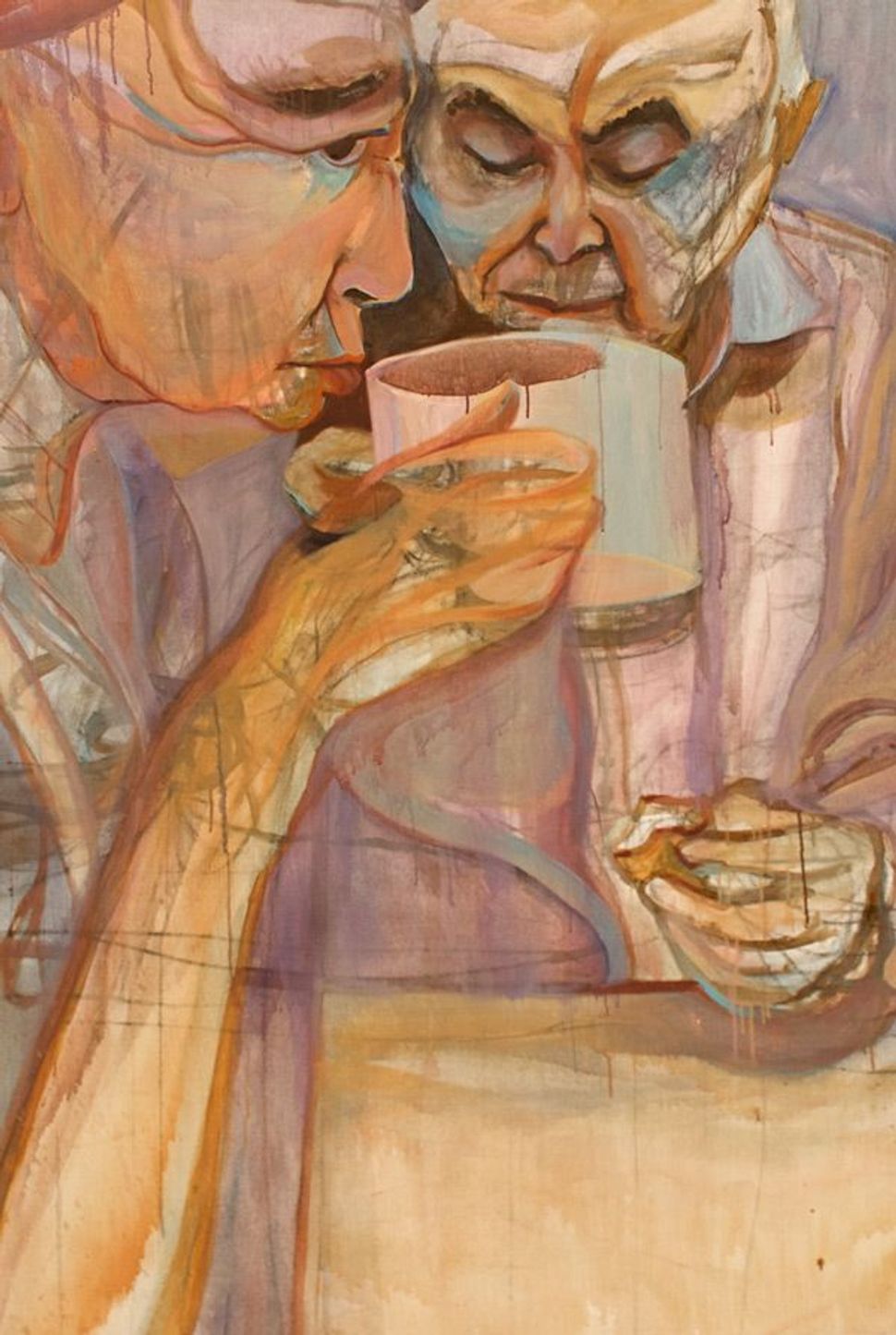 Celebrating the Ordinary: Artist Julie Mauskop?s depiction of her grandparents, Toba and Marton Mauskop, focuses on the normalcy of their lives, without the tattoos that branded them in Auschwitz. ?I am drawn to my grandparents? spiritual journey,? she says. (click for larger view) Image by COURTESY OF JULIE MAUSKOP

A video playing on a loop at an exhibition of Julie Mauskop’s paintings shows her grandmother frying eggs. It could be any morning of any day. There is nothing significant about the moment, beyond its utter normalcy. And that’s the point. 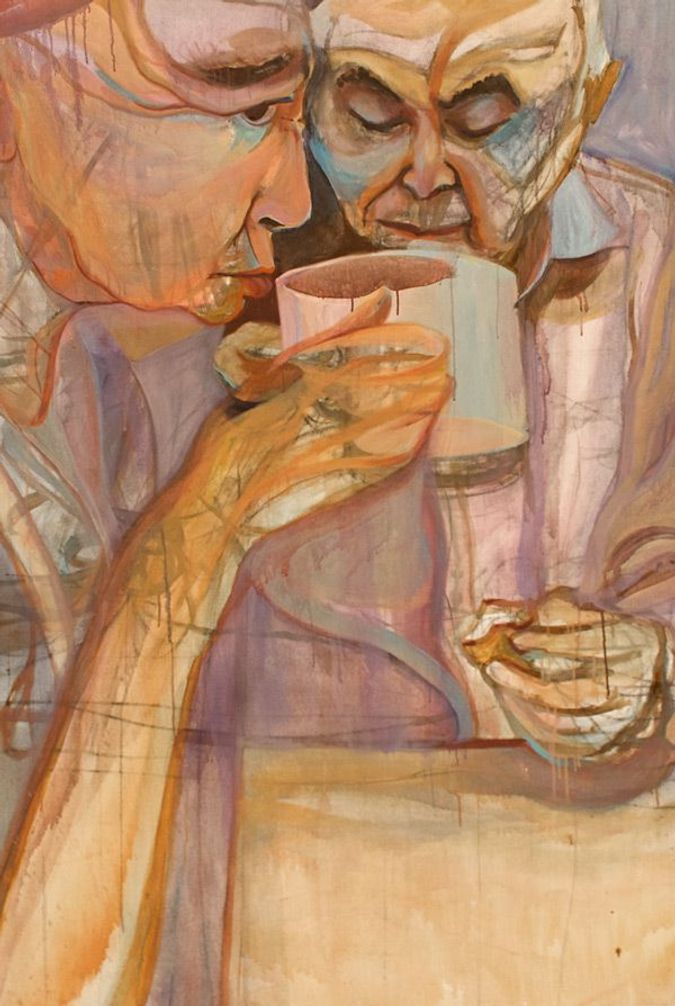 Celebrating the Ordinary: Artist Julie Mauskop?s depiction of her grandparents, Toba and Marton Mauskop, focuses on the normalcy of their lives, without the tattoos that branded them in Auschwitz. ?I am drawn to my grandparents? spiritual journey,? she says. (click for larger view) Image by COURTESY OF JULIE MAUSKOP

Mauskop’s grandparents are survivors of Auschwitz. Their arms bear numbers. But you won’t see these tattoos — so conspicuous in other depictions of survivors’ lives — in any of the dozen works of art in which they are the main subjects. These paintings, impressionistic and using a pallette of pastels, are now on display at Columbia University’s Kraft Center, in a show called “Survivors.”

Mauskop, 23, a recent graduate of Rhode Island School of Design, is also part of a movement known as “third generation,” or 3G (as in three generations removed from the war), and as her paintings indicate, there is much about her art that moves beyond the usual Holocaust themes of persecution and genocide. She is focused on what came after — the heroism of simply living an everyday existence once you have gone through hell.

“What I’m presenting is a more positive aspect,” Mauskop said. “I didn’t want to show just the morbid side, but how they are now, how they survived, how they have something they believe in, how they’re very strong and not always depressed.”

There are paintings of her bubbe and zeyde drinking coffee or walking through a snowy landscape, reciting prayers or reading a book, but there are no numbers on arms.

This decision to avoid depicting the Holocaust story itself might be unique to Mauskop’s generation. The determination of those who experienced the Holocaust to choose life and succeed at a normal existence has become a central theme of a younger cohort. It was also a subject recently explored in a documentary, “Four Seasons Lodge,” about a group of survivors who have been visiting the same Catskills bungalow colony every summer for the past 26 years. As a New York Times review put it, “in contrast with most survivor documentaries, this film has little formal testimony. These men and women…vacation together not to mull over the past but because their suffering is a base line they hold in common and see little reason to announce.” The film instead shows them acting as “any group of older Americans on vacation.”

Andrew Jacobs, a New York Times reporter who directed the film, wrote in an email message that after spending time with this group of survivors, “I realized that these people were more than just victims. Yes, they talked a lot about their pasts, but they were also very much in the moment, and the way they embraced life was startling at times. To see people in their 80s and 90s, who carried around such trauma, dancing, laughing, telling jokes and just enjoying each others’ company, was, to me, what I wanted to capture.”

According to those who have written about the reverberations of the Holocaust, it’s the distance of being one more generation removed that has allowed these grandchildren to see another aspect of the survivors’ lives.

“The fact that they were able to reclaim life, the grandchildren see that,” said Thane Rosenbaum, a law professor at Fordham University and a novelist who has written about the children of survivors. “The second generation was much more obsessed with what happened to the parents, the event itself: Where were you? Where were you taken? What happened to your brothers and sisters? I think the grandchildren let that go a bit and see the survival itself as interesting and the decision to choose life.”

Rosenbaum also pointed out that when the lives of survivors were depicted in the past, they were shown as somehow “damaged.” Novels like Isaac Bashevis Singer’s “Enemies, a Love Story” and popular movies like “Sophie’s Choice” (originally also a novel) contributed to this portrayal.

“It used to be that that was how we saw them,” Rosenbaum said. “They had to be bananas. But the third generation says no, they’re actually not bananas. They’re very sweet. They make eggs. They’re very normal. “

This third generation has been coming together as a movement over the past few years. In 2005, Daniel Brooks, now 33, started a group in New York City called 3GNY that has since become a not-for-profit and organizes events such as Sabbath dinners and happy hours; it co-sponsored the recent exhibition of Mauskop’s paintings.

For the second generation, Brooks said, the Holocaust became a part of their identity because they needed “catharsis, like cleaning dirty laundry.” For this younger generation, however, the motivations are different.

“I don’t think we have a need to talk about how it affected our personalities,” Brooks said. Instead, 3Gs, as they call themselves, beyond supporting each other and encouraging the remembrance of their grandparents’ stories, look to apply the Holocaust in a way that will allow them to say something meaningful about human rights and genocide. They have conducted events around the mass killing in Darfur, for example.

Brooks said that forming a group around this identity was a way of providing a forum for discussing common history. “I had this urge to talk to other 3Gs about what our legacy was and in what other forms we could articulate these stories to a different generation.”

For certain thinkers, though, the distance of the third generation should not be an excuse for neglecting what they see as the main lesson of the Holocaust: man’s penchant for evil. Anne Bayefsky, director of Touro College’s Institute on Human Rights and the Holocaust, made this point, saying that the grandchildren had a right to be hopeful about the lives their survivor grandparents made, but that they should not evade their special responsibility to be clear-eyed about the hate and antisemitism that marked their families’ histories.

“Emil Fackenheim, the great Jewish philosopher, always thought we would only begin to understand the Holocaust many, many decades after it happened, because the pain was too raw,” Bayefsky said. “We didn’t want to go back and relive it. I think there is something to be said, though, about this generation being able to come to grips with the evil in a way which those who were too close to it were never able to do.”

Holocaust Remembrance at a Distance