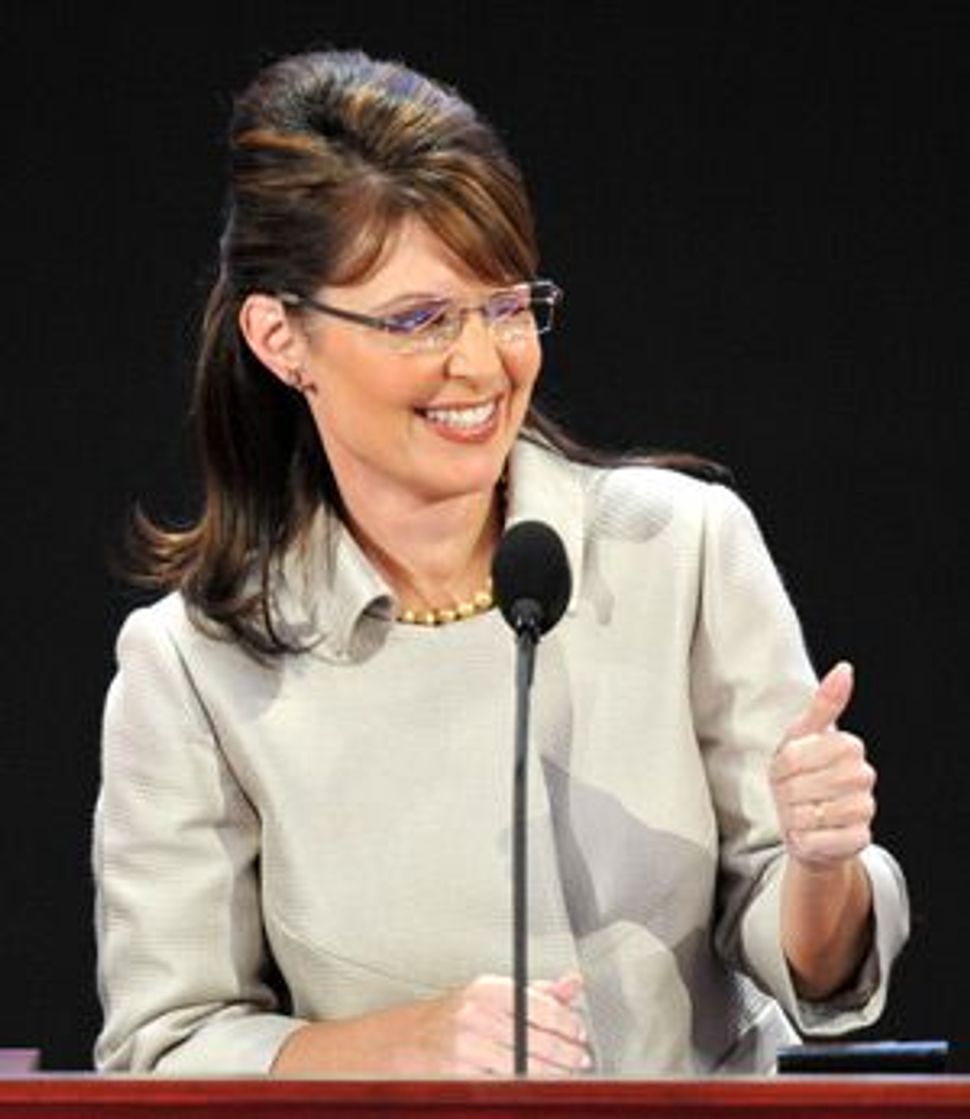 Her Moment: Palin at the GOP national convention in 2008. She has garnered plaudits from prominent neo-conservatices, including William Kristol, Norman Podhoretz and Seth Lipsky. Image by GETTY IMAGES

When Sarah Palin was asked by Barbara Walters late last year whether she supported a freeze on settlement growth in the West Bank, Palin issued an emphatic no. But her reasoning confounded many: “More and more Jewish people will be flocking to Israel in the days and weeks and months ahead. And I don’t think that the Obama administration has any right to tell Israel that the Jewish settlements cannot expand.” 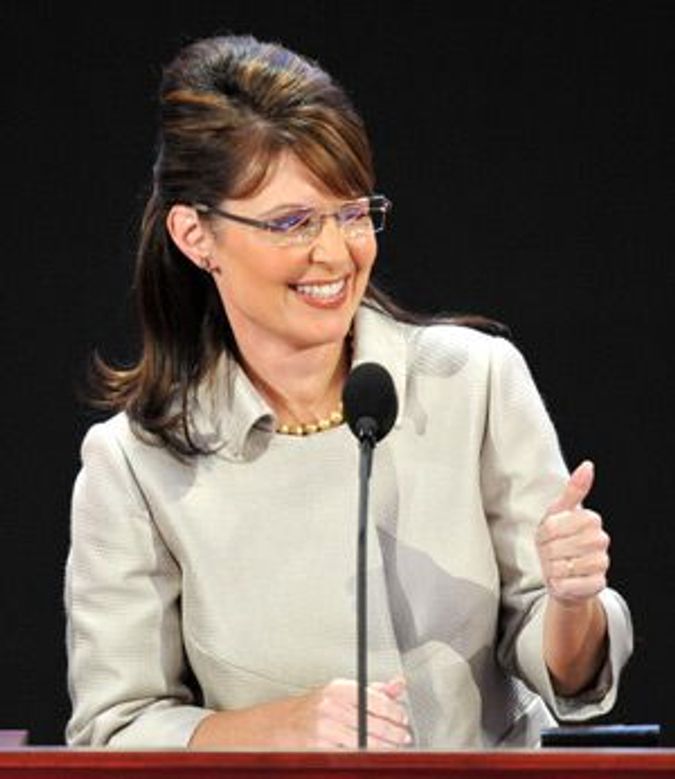 Her Moment: Palin at the GOP national convention in 2008. She has garnered plaudits from prominent neo-conservatices, including William Kristol, Norman Podhoretz and Seth Lipsky. Image by GETTY IMAGES

Who were these Jews, and why were they “flocking”? Those predisposed to be critical of the former Alaska governor and Republican vice presidential nominee, such as writer and blogger Jeffrey Goldberg, saw Palin’s evangelical Christian roots showing. She was clearly expressing some kind of end-of-days theology, he said, that demands the ingathering of Jews before the Second Coming and its accompanying rapture (an event that doesn’t bode well for the Jews).

But Goldberg’s reading, though certainly the dominant interpretation, was not the only one. Benyamin Korn, a Philadelphia-based activist and former editor of the Jewish Exponent, heard something less apocalyptic in Palin’s words.

“If you work with Nefesh B’Nefesh, then you know exactly what she meant,” Korn said, referring to the Zionist group that facilitates North American immigration to Israel. “She understands that Zionism, which means the Jews should live in the Land of Israel, is a vital force. That’s all.”

Korn is the founder of a new group called Jewish Americans for Sarah Palin, and his efforts are part of some recent Jewish support that has been trickling in the direction of the hockey mom from Wasilla. Even though American Jews have repeatedly disapproved of her in large numbers in poll after poll, giving her abysmally low approval ratings, her recent high-profile jabs at the president have earned her support from some of the most prominent Jewish conservatives today.

Not only does she continue to receive the hearty backing of William Kristol, editor and publisher of The Weekly Standard and contributor to Fox News, but at the end of March, Norman Podhoretz, former editor of Commentary and godfather of the neoconservative movement, took to the op-ed page of The Wall Street Journal to offer a “defense of Sarah Palin.” He compared the ridicule that has greeted her arrival on the national scene to the laughter at Ronald Reagan’s expense when Reagan became the Republican presidential nominee. Podhoretz’s argument boiled down to this: “What she does know — and in this respect, she does resemble Reagan — is that the United States has been a force for good in the world, which is more than Barack Obama, whose IQ is no doubt higher than hers, has yet to learn.”

Podhoretz closed by dramatically proclaiming that he would “rather have Sarah Palin sitting in the Oval Office than Barack Obama.”

But these are neoconservative intellectuals, most of whom — as an article in the January issue of Commentary by Jennifer Rubin illustrated — are spending their time trying to figure out why Palin “rubs Jews the wrong way.” Is there anyone in the American Jewish community at large willing to wear a Palin 2012 button? Korn thinks there is, and it’s this demand he’s hoping to fulfill.

It should be said that as of yet, Jewish Americans for Sarah Palin has not published a list of the “doctors, lawyers, professors, rabbis” that Korn said support his efforts. At this point, there is little evidence that his constituency is more than one — though Korn has managed to put together a fairly professional-looking website. But with an increasing number of American Jews anxious about what they see as the undue pressure that Obama is applying on Israel, Korn thinks that more of them will come to see Palin’s value.

He doesn’t hide the fact that, in his eyes, her main strength is just how much she irritates those on the left.

“She has the ability to get under the skin of the opponents and particularly this president,” Korn said. “And from the point of view of someone who opposes what this president is doing, particularly on Israel policy, I’m glad that she has that ability.”

Korn himself has an unusual background. Up until the mid-1980s, he was a self-proclaimed “left-wing organizer” who taught pan-African studies, was a Central America solidarity activist and worked at a jazz radio station in Philadelphia with Mumia Abu-Jamal. He even voted for Jimmy Carter in 1980. He then had a radical transformation, switched to Orthodox from Reform Judaism and became a strident pro-Israel activist, an opponent of, as he put it, the “series of concessions that are called the peace process.” Eventually Korn, now 54, even headed the Zionist Organization of America.

His attraction to Palin began when he first saw her speak at the Republican National Convention. He had never even heard of her before then.

“I was captivated — not by her looks, for goodness sake — but by her charisma, her brilliance, her grasp not just of the issues, but of the moment,” Korn said. “Which is a very different thing in politics, to understand the moment. And it is because of my understanding of the moment that we hurried to launch this organization. I have been an admirer of hers since then.”

Korn went live with his website, JewsforSarah.com, earlier than expected in mid-April, a response, he said, to comments by President Obama that appeared in the New York Times on April 14, linking continued conflicts in the Middle East with the danger to American soldiers

in the region. Korn called this a “modern blood libel” and decided that it was the right time to go public with his creation — “our motivation is so strongly in reaction to what is coming out of Obama,” Korn insisted.

It’s not clear though that Korn or any other high-profile Jewish supporter can swing American Jews behind Palin. A recent blog post by Jonathan Chait on The New Republic’s website in mid-April, titled “The Non-Mystery of Why Jews Hate Palin,” pointed to recent comments in which Palin referred to the United States as a “Christian nation” and questioned the separation of church and state. No wonder, he wrote, that Jews find her distasteful.

And yet, as Palin gains acceptance, however small, in certain Jewish quarters, she undoubtedly becomes more credible for a larger American Jewish audience, of which some members are eager to find a fitting opponent to the president.

Seth Lipsky, former editor of the New York Sun and of this publication, is friendly with Kristol and Podhoretz and shares some of their neoconservative views. He doesn’t offer an endorsement of Palin, but he does welcome the formation of Korn’s group and believes that Palin is “staking out a terrific set of positions.”

Like many others, Palin and the current moment remind Lipsky of an earlier era.

“I’ve been telling people that the situation reminds me a little bit of the 1984 presidential campaign, when Vice President Mondale challenged Reagan,” Lipsky wrote in an e-mail to the Forward. “Mondale discovered that Reagan was under the impression that once an Intercontinental Ballistic Missile was fired, it could be recalled in flight and brought back to base. He ridiculed Reagan mercilessly. I said or wrote at the time that this was the difference between Mondale and Reagan — Mondale knew how the missile worked and Reagan knew whom to point it at. And that’s how I feel about Mrs. Palin. She may not know as many details as some of the other candidates, but she comprehends whom we’re up against.”