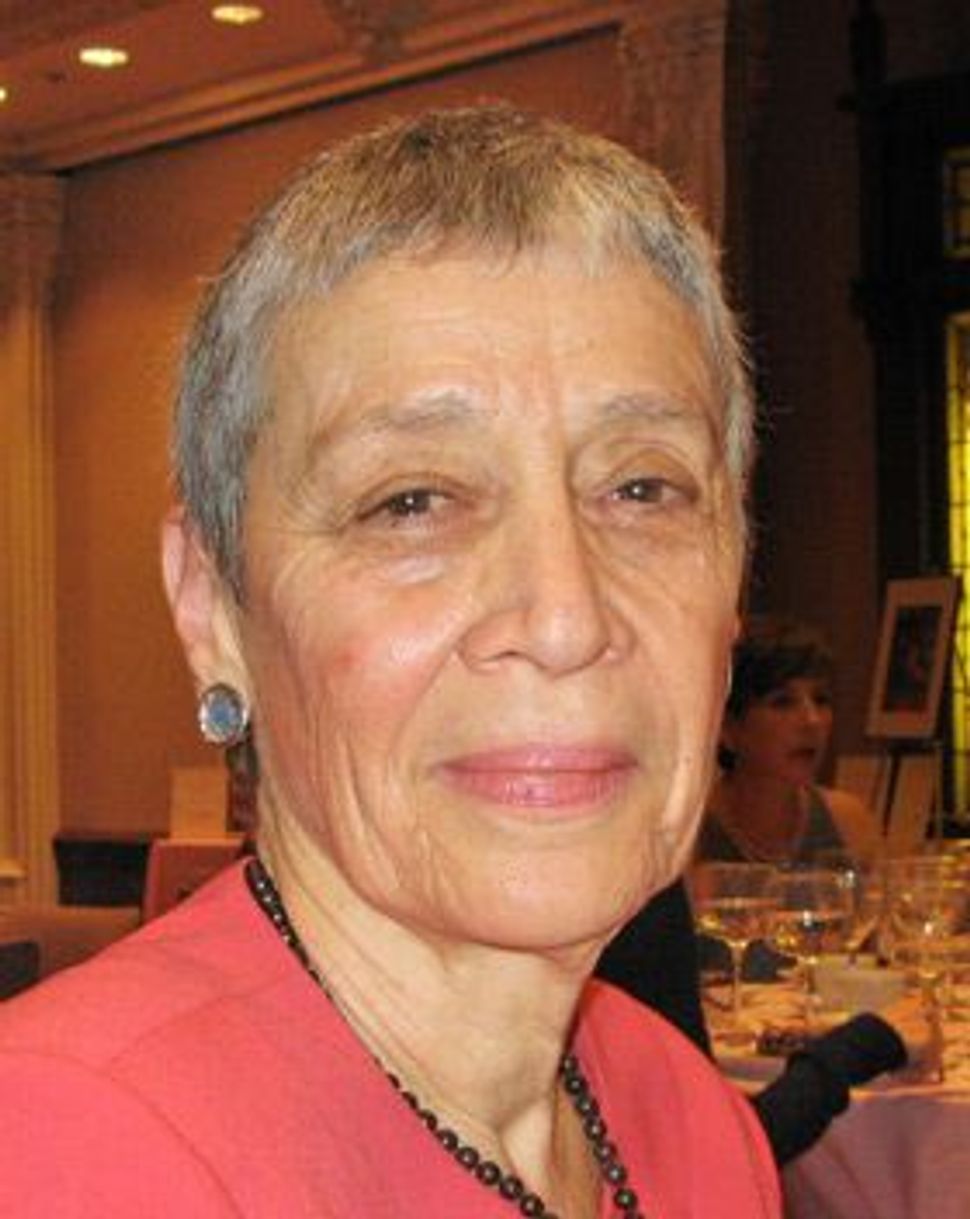 “We live in a world of miracles!” said James Snyder, director of the Israel Museum in Jerusalem, to the elegant assemblage at the April 13 American Friends of the Israel Museum luncheon, held at the Metropolitan Club. Snyder reported that the more than $300,000 raised “will be assigned to the completion… of the museum’s $100 million Campus Renewal Project.” Referring to that morning’s viewing by the guests of the Whitney Museum of American Art Biennial, following lunch, Whitney associate curator Gary Carrion-Murayari interviewed photographer Nina Berman, whose montage “Marine Wedding” of Ty Ziegel — a Marine sergeant who was the victim of a suicide car bomber in Iraq and lost part of his left arm and his entire face — is not an easy viewing. Berman lamented that “the wounded soldiers are invisible… I wanted to be more engaged with the war in Iraq.” Noting her disappointment with American press coverage, she said, “Someone should get these photos to Congress.” 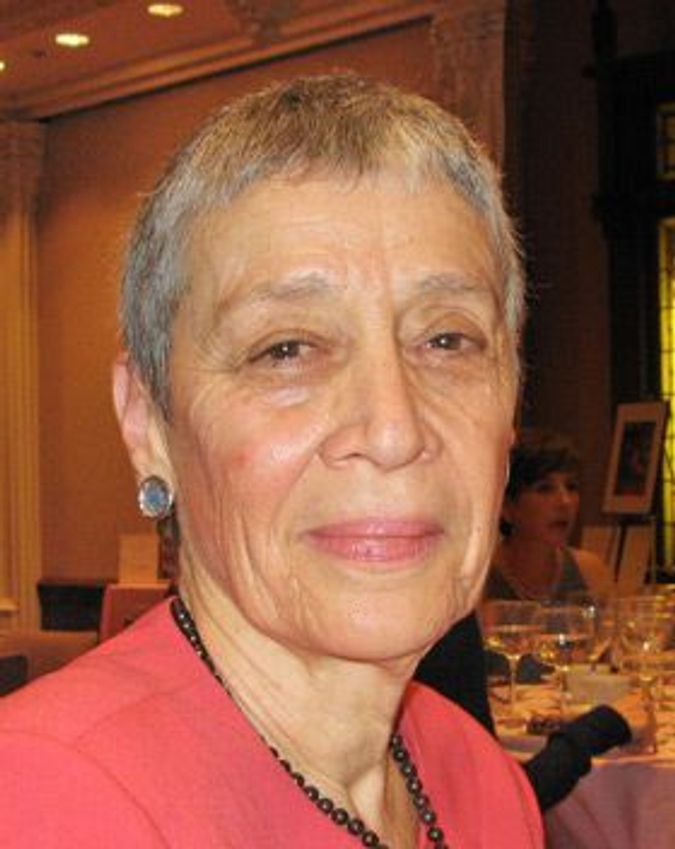 Responding to questions from the audience, Berman explained, “He never told me not to take the photos…. In 2008, following his divorce from Renee Kline, whom he married in 2006, Ziegel said he was happy [for the world] to see this as a record of his life.” Founded in 1965, the Israel Museum is the largest cultural institution in Israel and the only encyclopedic museum in the region with collections virtually in all areas of art. This year celebrates its 45th anniversary and the completion of its three-year, $100 million Campus Renewal Project, which doubles its collection space.

“Circumcise Me” — A More Than Cutting Encounter With Judaism

When a “Circumcise Me” ad caught my attention in November 2009, my initial reaction was “Oy! Who needs it?” It was not until my accountant, an avid theater maven, joshed at “late filing penalties” unless I saw Yisrael (ne Christopher) Campbell perform his monologue about his triple-cut odyssey en route to becoming a Jew that I headed to the Bleeker Street Theatre. Once Catholic — now peyes and beard-wearing — Campbell mounted the stage in a long black kapote, clutching a plastic bag that, he explained, “is a Heredi attaché case.” I was hooked. Amid the asides, jokes and one-liners, what I found most entertaining and impressive was the determination with which this descendant of Scots was to trade his family’s tartan for a tallit. Engaging, informative, funny and touching, Campbell’s 90-minute soliloquy — augmented with props and video clips — was scheduled to close on January 6 but was extended to February 28, and again to May 16. Tells you something. Try not to miss this one.

Written by Campbell, a comedian once known simply as “Chris” — whose aunt was a nun — he recounts his life’s high and low points: his dabbling in substance abuse as a teenager; a mother who was an alcoholic; how his life “was changed” by Leon Uris’s tome, “Exodus”; his journey to Israel. But what was most engaging and entertaining was the hilarious chronicling of his encounters with various branches of Judaism, which he seasoned with a reference to a Yitz Greenberg aside: “It doesn’t matter what denomination of Judaism you belong to as long as you are ashamed of it.” At the end, what resonates most is Campbell’s unrelenting struggle and commitment to becoming a Jew who is willing to accept everything the world and history has and will continue to throw at him.

“Iran is the main threat… not only in the Mideast and Israel, but the entire world,” said Gabriela Shalev, Israel’s ambassador to the United Nations and honoree at the April 22 American Friends of Rabin Medical Center Women’s Luncheon, held at the Jewish Museum. “They want to wipe Israel off the map. These are not just words. This is how the Holocaust began,” said Shalev, who added, “My grandparents were murdered in Auschwitz…. The doomsday clock is ticking faster than most people would like to admit.” With breast cancer and women’s health care at RMC the focus of the luncheon, Shalev revealed, “My mother was diagnosed with breast cancer at 68.” Tobi Kahn, a renowned artist whose works are included in the Jewish Museum’s collection, presented a slide lecture on some of the gems of the museum’s galleries.

“We cannot take the relationship between the U.S. and Israel for granted…. We have to be vigilant and cautious,” said AFRMC Chairman Barry Cohen, who praised the luncheon attendees for their efforts toward improving both the medical care and relations between America and Israel.

Joshua Plaut, executive director of AFRMC, thanked the guests for their support. Noting that Rabin Medical Center, located outside of Tel Aviv in Petah Tikvah, treats 11% of Israel’s breast cancer patients, Plaut added that Rabin also offers the patients “laughter therapy and yoga classes.” Following the luncheon, Kahn led the guests in a private tour of the museum’s galleries.

The April 11 Yom HaShoah Observance, hosted by the Holocaust Resource Center of the Jewish Federation of Greater Clifton-Passaic, remembered Albert Einstein and Dr. Currier McEwen, former dean of the New York University School of Medicine, for their roles in saving the lives of Jewish doctors and scientists in the 1930s. At a ceremony held at the center’s auditorium, Fred Einstein, a relative of Albert Einstein, recalled: “Very soon after World War I, Professor Albert Einstein was one of the earliest to sound the clarion call that alerted the civilized world to the emerging Nazi evil. His was a silent voice. Late in the 1930s he collaborated with Dr. Currier McEwen, then dean of NYU Medical School, in aiding approximately 20 Jewish physicians and scientists to flee from Germany and Austria.” Fred Einstein noted, “Not only did McEwen save the lives of 20 men, but the lives of the wives and children. In his memory, the O. Currier McEwen Garden was dedicated.”

McEwen was a horticulturist who created 160 hybrids of irises. The Presby Memorial Iris Gardens in Upper Montclair, N.J., planted his irises. The flowers will also grace the circular front driveway of the JCC of Clifton-Passaic with the following inscription plaque: “A righteous humanitarian and accomplished horticulturist who, while dean of the NYU Medical School in the late 1930s, saved Jewish doctors and scientists from impending genocide.”

In his post-event letter to me, Fred Einstein wrote, ”Just like Albert Einstein, I was born in Ulm…. My grandfather would often go there to play cards with his friend Max Erlanger.” Still trying to understand the genealogical connection, I was informed that Albert Einstein and Fred Einstein are descendants of Boruch Moses Einstein, who was born in Bad Buchau, and that Albert Einstein’s grandmother’s mother and Fred Einstein’s grandfather were brother and sister. I confess that I do not know the e=mc2 equivalent formula that could calculate how many times removed the two Einsteins are.

The observance also honored Ernest “Ernie” Michel, who is a survivor of Auschwitz and other camps and was also a correspondent who covered the Nuremberg War Crimes Trial for a German news agency. Michel was the initiator and chairman, in 1981, of the World Gathering of Jewish Holocaust Survivors in Israel, which brought together — for the first time — 6,000 survivors and their families from all over the world. Michel is the only Holocaust survivor who has been a professional in the Jewish community for 63 years, until his retirement. His last position was as executive vice president and CEO of New York UJA-Federation. It was the only job he ever held..