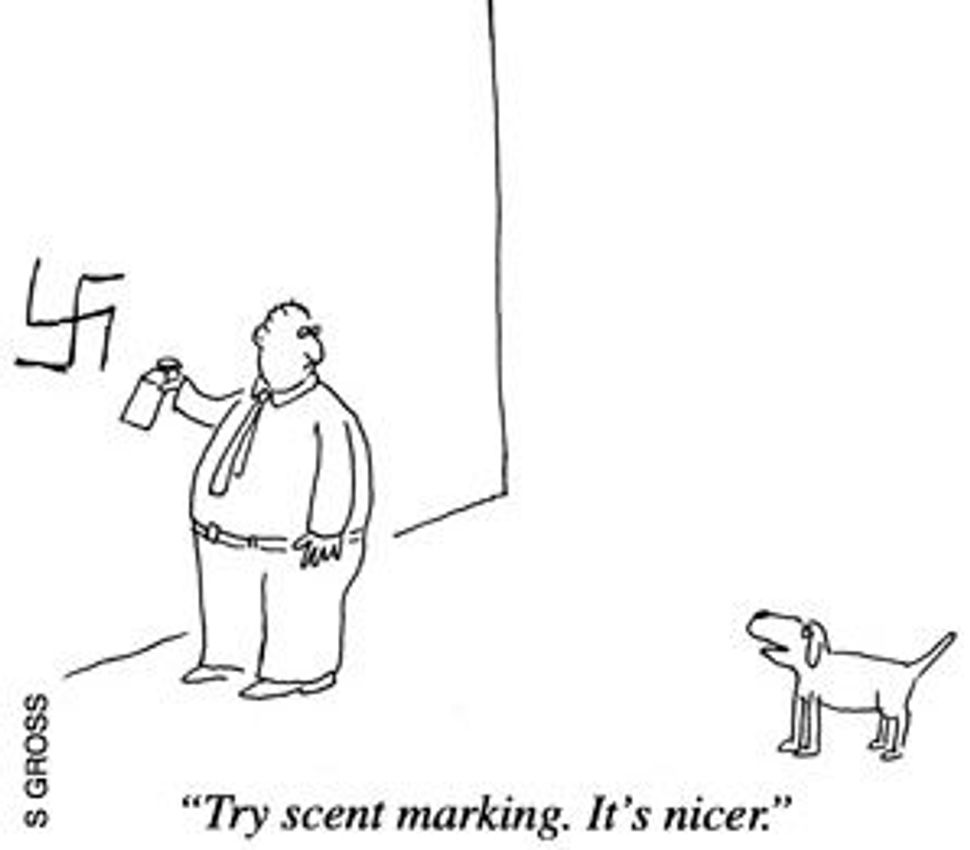 Not everyone would look at Scotch Tape and think of snails, but Sam Gross did and came up with the most popular cartoon in his 50-year career. One snail looks at another and says, “I don’t care if she’s a tape dispenser. I love her.” It’s a high concept sight gag and it’s all in the shapes — the dispenser and the snails look uncannily alike. 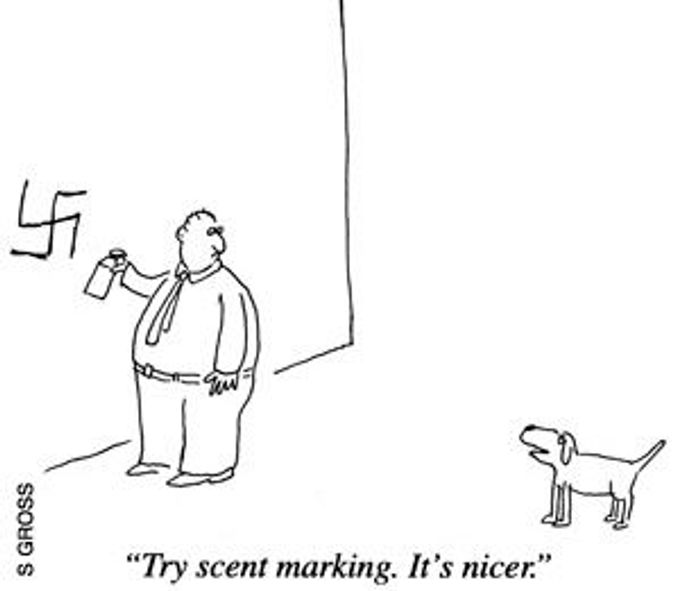 Not everyone would look at a swastika and think of a high concept joke — let alone 120 jokes — but Sam Gross did. Actually, more than 120. “We Have Ways of Making You Laugh: 120 Funny Swastika Cartoons,” due to be released by Simon & Schuster in March, is really only a first installment. He’s got 360 more of them. Over the past 10 years, Gross has been thinking a lot about swastikas.

The idea for the series came to him in 1997. A local newscast started off with a vandalism story. “Some guy drew a swastika on cars and he got on TV,” Gross told the Forward in a phone interview. Gross was angry, but not with the kid with a spray can. “Why is this the lead story, I thought? That kid obviously meant to be provocative, and he was doing his job… The media, though, shouldn’t have given him the chance, shouldn’t have made the swastika such a forbidden and exciting thing. The news gave it too much power.” Gross retaliated in the only way he knew how. He drew cartoons.

When he started working on them, Gross’s wife thought he was crazy. Looking at the book, you can understand why. A cartoon of a man throwing a piece of paper into a swastika-shaped garbage can that sports the sign “White Trash Only” might be funny, or a dog telling a vandal who’s just painted a swastika on a wall to try marking with scent instead (“It’s nicer”) might do a good clean job of making its point, but what about children at a party whacking at a swastika piñata or a frog flicking its tongue at swastika-shaped flies? People could get confused.

Gross showed the cartoons around to friends. The first ones to get what he was trying to do were a married couple, both Holocaust survivors. There are no Jews and no Germans in the book, Gross points out. The goose-steppers are not real Nazis but schnook wannabes. The swastikas appear in incongruous places — on the armband of a psychiatrist, whose exasperated patient says, “Act out. That’s easy enough for you to say,” or on the nose of a man who’s a “Shnozzi.” The point, Gross maintains, is to reduce the swastika to something humorous. He uses swastikas the way Lenny Bruce used four-letter words, to drain them of their shock value, to make them banal.

Gross, who has published cartoons everywhere from Rascal (a girly magazine of the 1950s) to The New Yorker, is hardly a revisionist. He thinks that Nazism always poses a potential threat, and he wants to make sure that no one thinks that his book belittles the Holocaust or makes light of antisemitism. He only wants people to keep things in perspective, to take a matter-of-fact attitude. Symbols are only symbols, he said. They are inconsequential, or at least they should be. In fact, he hopes that “We Have Ways of Making You Laugh” will so demystify the swastika as a symbol that the Nazis will have to go and find another one. If it doesn’t, he’s got three more swastika books just waiting.