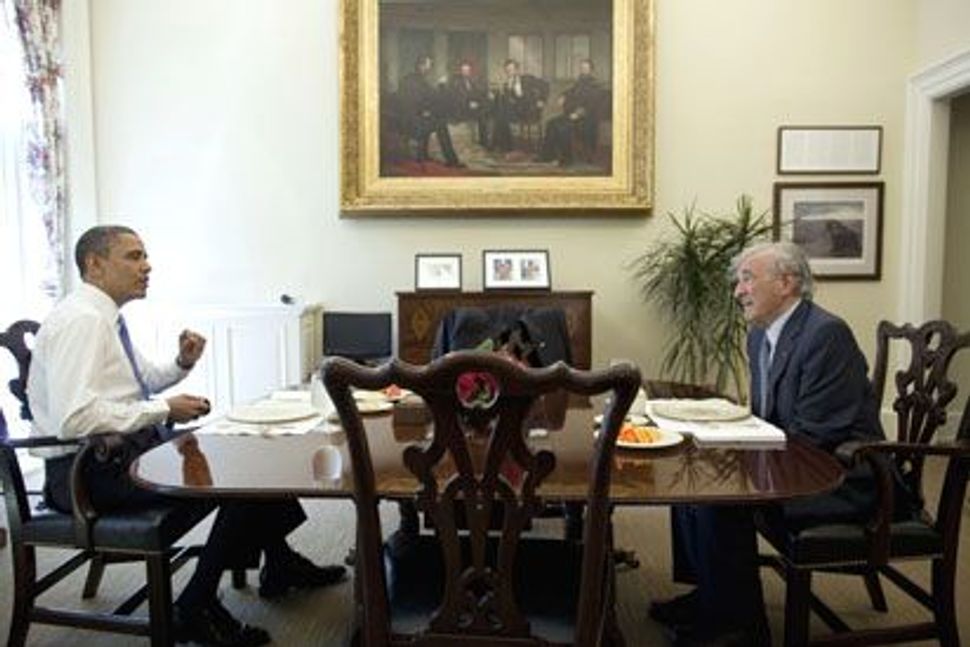 When Nobel laureate Elie Wiesel published an open letter in April arguing against pressuring Israel on the issue of Jerusalem, it was seen as a sign of just how severe tensions had become between the Obama administration and Israel’s government and its allies in the American Jewish community. 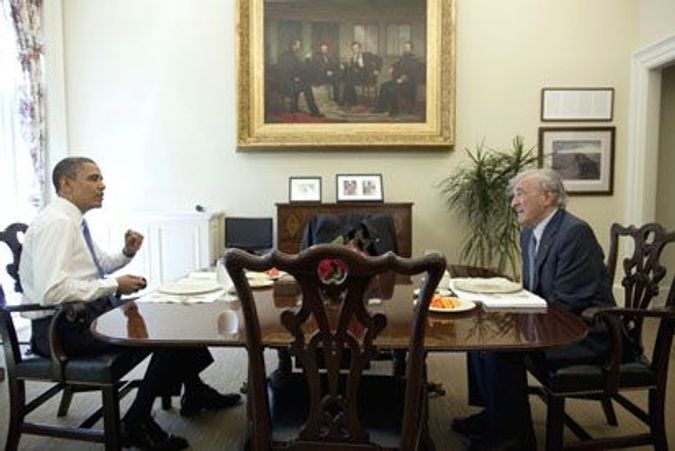 What a difference a couple weeks make. By May 4, Wiesel was sitting down with the president at the White House for lunch.

“There were moments of tension, but the tension, I think, is gone,” Wiesel told reporters after the lunch. “It was a meeting between two friends, two Nobel Peace laureates. It was a good kosher lunch.”

This “good kosher lunch” came against the backdrop of a larger charm offensive by the Obama administration, aimed at convincing American Jews that despite some differences, its commitment to Israel is strong.

David Axelrod, Obama’s senior adviser, told reporters that the meeting was scheduled before Wiesel published his letter on Jerusalem. He added that the administration has not called for making Jerusalem the first issue for negotiations between Israelis and Palestinians. Wiesel, for his part, made clear after the meeting that he and the president respect each other’s views on Jerusalem.

Officials at all levels of the Obama administration have participated in the concerted effort to allay concerns within the Jewish community. Administration officials have made phone calls, written letters, and showed up at Jewish and pro-Israel events in recent weeks. They delivered a unified message: the unshakable bond between America and Israel, stressing the mutual benefits for both countries of this friendship, and emphasizing that Palestinians and Arab states share responsibility for the lack of progress toward peace.

Even before the Wiesel lunch, President Obama had personally participated in this effort. He sent an April 20 letter to Alan Solow, chairman of the Conference of Presidents of Major American Jewish Organizations, and dropped in on an April 26 White House meeting between National Security Adviser James Jones and Israeli Defense Minister Ehud Barak.

The efforts appear to be yielding fruit. At the conclusion of his Washington visit, Barak said that American-Israeli relations are once again on track. Speaking at his group’s annual conference in Washington, the Anti-Defamation League’s national director, Abraham Foxman — who has been outspoken in his criticism of the Obama administration’s recent approach toward Israel — said that there had been a “re-calibration of tone” in relations between the two nations. And now Wiesel, viewed by many as the moral voice of the American Jewish community, is saying tensions have cleared.

Wiesel’s open letter was published in mid-April as an advertisement in The Washington Post, The New York Times and other major newspapers. It described a spiritual connection between the Jewish people and Jerusalem and argued that the issue of the city’s future should be left until after Israelis and Palestinians learn to co-exist.

“For me, the Jew that I am, Jerusalem is above politics,” Wiesel wrote. “When a Jew visits Jerusalem for the first time, it is not the first time; it is a homecoming. The first song I heard was my mother’s lullaby about and for Jerusalem. Its sadness and its joy are part of our collective memory.”

While the letter did not directly mention the American government or Obama, it argued: “Pressure will not produce a solution.”

The source of funding for the publication of Wiesel’s statement was not mentioned in the ads. In an interview with the Israeli daily Haaretz, Wiesel said that his advertisement was not connected to an open letter issued the same week by the president of the World Jewish Congress, Ronald Lauder, that criticized the Obama administration for putting pressure on Israel.

“I am not part of some organized campaign,” Wiesel said.

Wiesel’s letter, however, certainly struck a chord, and drew a sharp response from Israeli and American Jewish doves.

Writing in Haaretz, Yossi Sarid, a former Israeli education minister and a founder of the left-wing Meretz party, addressed his own open letter to Wiesel. Sarid’s response was later reprinted by the J Street Education Fund as a paid advertisement in several Jewish newspapers, including the Forward.

Sarid disputed the accuracy of Wiesel’s statement that Christians, Muslims and Jews are allowed to build homes anywhere in Jerusalem. Sarid alluded to the ongoing disputes in the East Jerusalem neighborhood of Sheikh Jarrah, where Israeli courts have evicted Palestinians from homes that were ruled to have been owned by Jews before Israel’s 1948 War of Independence.

In a separate response, an Israeli group called Just Jerusalem, which protests the Sheikh Jarrah evictions, published an open letter to Wiesel signed by about 100 activists, including doves such as novelist David Grossman, former Knesset speaker Avraham Burg and philosopher Moshe Halbertal.

“You speak of the celestial Jerusalem; we live in the earthly one,” they wrote. “For more than a generation now the earthly city we call home has been crumbling under the weight of its own idealization.”