Israel Showcases Its Brain Power on a Receptive World Stage 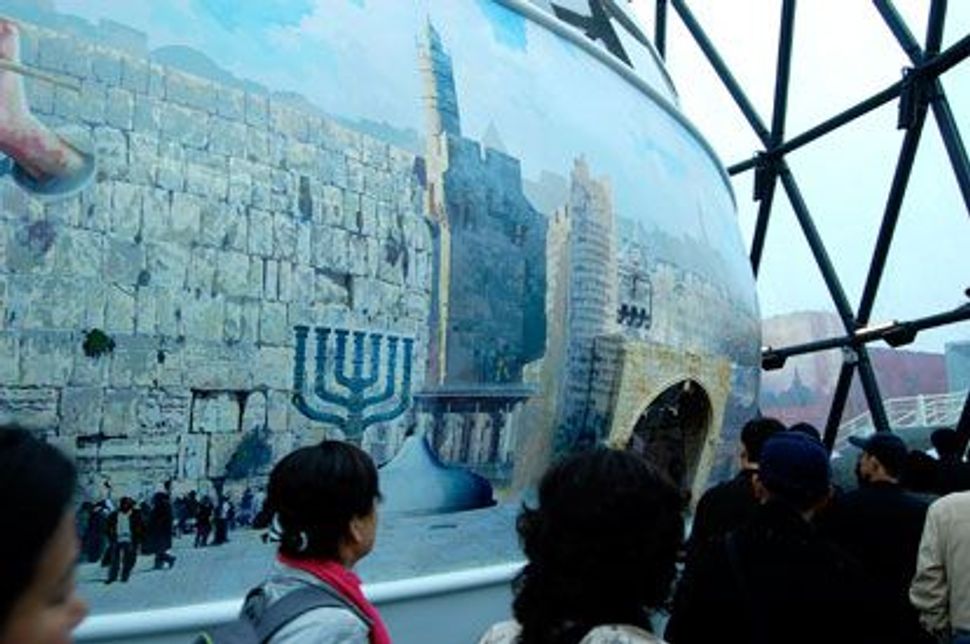 Virtual Tourists: Visitors to the Israel pavilion walk past a mural depicting the Western Wall. Image by Howard Goodman

The age of great world’s fairs is supposed to be over, but no one told the Chinese. 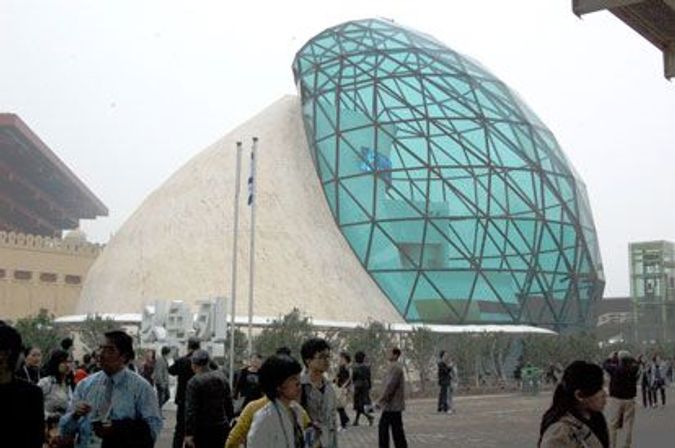 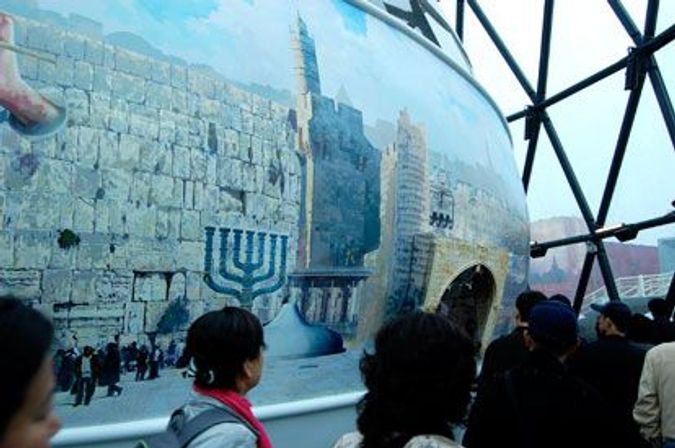 Virtual Tourists: Visitors to the Israel pavilion walk past a mural depicting the Western Wall. Image by Howard Goodman

Ignoring the conventional wisdom that these grand global assemblages have been rendered obsolete in the era of the Internet and satellite communications, and that their six-month life spans make them an unconscionable financial waste, the Chinese have merely gone ahead and opened the biggest, most ambitious World Expo in history. It’s an extravaganza that costs more than the Beijing Olympics, and is expected to draw a minimum of 70 million people.

No one told the Israelis, either.

Here in the shadow of the giant red China Pavilion, the 1,300-acre expo’s centerpiece, stands the small, elegant, teardrop-shaped Israel Pavilion: half-stone, half-glass, an interlocking yin-yang of light and solid, designed to tell its story to several million Chinese whose knowledge of the Jewish people is sketchy at best.

“It’s not a museum to be looked at,” said Yaffa Ben-Ari, the pavilion’s deputy commissioner, “but a way of making an emotional connection. It’s a dialogue between the old and the new, tradition and the future.”

The State of Israel has been mostly a casual participant in previous world expos. It didn’t even show up for the 1964 World’s Fair, in New York. When it did appear, in Brussels 1958; Montreal 1967; Seville 1992; Lisbon 1998, and Hanover 2000 (anyone even remember these?), Israel merely decorated ready-made exhibition spaces.

Yet, for the People’s Republic of China’s big coming-out party — the Expo opened on April 30 and will run until October 31 — the Jewish state pulled out all the stops.

Three years ago, the Israeli government decided that appearing at this expo was a priority, and so it assigned the Foreign Ministry to come up with a budget and design. The ministry earmarked an unprecedented 40 million shekels ($11 million) — half for the building, half for operations — and called a competition that attracted 23 designs.

“And it is not very Israeli to work so early,” said Jackie Eldan, Israel’s consul general in Shanghai, with a sly grin.

But if not for China, then whom? The world’s most populous country is modernizing and developing at a breathtaking pace. It’s hungry to transform its economy to be more technological and high-tech. And Israel, a leader in cutting-edge technologies, wants to turn its know-how into opportunities.

“These are historic times,” Eldan said. In hectic Shanghai, where each workday, he says, is like a week anyplace else, his consulate runs very much like a business development office. He sees the expo as a chance to pay friendly respects to the rising giant. And as a chance to educate Israeli businesspeople and government officials about the Chinese market.

Chinese people tend not to know much about Jews. When Ben-Ari was doing basic research for the Israel Pavilion two years ago, she asked people in the Chinese public relations industry how many Jews they thought there were in the world. The estimates ranged from 50 million to 100 million. Um, no. The answer is closer to 14 million, a number that would comfortably fit into Shanghai, a city of 20 million, and still leave room for 6 million more people.

When I told a Chinese colleague in my Shanghai workplace, an English-language daily newspaper, that I’m Jewish, she brightened. “Jewish! I know Jewish! ‘Sex and the City!’” There you have it: 4,000 years of history condensed into WASP princess Charlotte’s conversion so that she could marry nice bald-guy Harry.

The Jewish image here, however, is highly favorable. The Chinese stand outside European history. Their past doesn’t include two millennia of Christian-Jewish miseries. They’re not invested in the Israeli-Palestinian conflict. They don’t see Jews through those old difficult prisms

When she tells a Shanghai cab driver that she’s Israeli, he breaks into a smile, gives her an extra-warm “Ni hao!” (“Hello”) and taps his forehead: international charades for “brainiac.”

In general, “the Chinese look upon the West with a lot of suspicion,” Eldan said. “But they look upon the Jews with a lot of support.” In the 1930s and ’40s, in fact, Shanghai was one of the only cities on earth to admit Jews who were fleeing Hitler. You didn’t need a visa to come here, just the determination to make a difficult trip, and so almost 20,000 did, surviving the war despite the Japanese occupation of the city. After the war, that Jewish community dissolved and headed for America or Israel, but today another generation of 3,000 to 4,000 Jews lives in Shanghai, including 200 Israeli families, the consulate says, here mainly for business.

The Chinese see a lot of themselves in the Jews, Ben-Ari noted. Both are inheritors of a couple of history’s longest-running civilizations — their ancient languages and calligraphy still in use in the modern technological world. Both value family and children. Both put a high premium on education.

“We want to take this picture of smartness that the Chinese have of us,” said Ben-Ari, a smile growing on her face, “and show them that they’re right.”

She added: “Yes, we’re small; yes, we don’t have the resources — we don’t have water, oil, the quality of land. The major resource in Israel: the brain. The quality of creative energy we have. Because the Jewish philosophy is always to ask questions.”

That’s what you get at the pavilion.

First you take a place in line outside in a shaded area with benches, 54 orange trees and Israeli-invented 3-D television screens (no glasses required) showing images of the country. The creature comforts were a priority of architect Haim Dotan, of Tel Aviv University. “We went to the Zaragoza [Spain] Expo two years ago, and it was so hot, and people were standing in queues with nothing to drink,” he told me. “And we said we have to have a garden.”

You step into a glass-enclosed half-rotunda, where there’s a 100-foot-long painting of Israeli scenes (Jerusalem, Tel Aviv, deserts, orchards) and video images of the country’s diversity: big-hatted Hasids and bikini’d beachgoers. I watched as a guide led a preview group of about 50. The guides are young Israelis who speak Mandarin. One of them is Mengyao Wang, born in China but raised in Israel, a Jewish convert like her parents. The visitors, almost all Chinese, are invariably complimentary, she tells me. “They think Jews are smart, good at inventing things, good at business. They think Israel is a good place with a good economy.”

Then you’re ushered into a darkened circular hall six stories high with 300 other people for a wraparound multimedia movie. Flashes of color and light, then stars forming, images of energy and massing matter. I thought, this is Genesis, Israel is going to talk about its being the Holy Land. But that wasn’t it at all. We were soon looking at Einstein and E=mc2. This was all about brainpower.

A parade of Israel-invented wonders followed, with narration in Mandarin, subtitles in English: a communications satellite floating through space (“Did you know that news of the 2012 London Olympics will reach China by an Israeli satellite?”); a computer chip; a flash-memory USB device (leading to a montage of photos of children and families); a PillCam for doctors to see inside patients; the stent; high-tech methods of irrigating plants.

Then final words not from Maimonides or Hillel, but China’s modern founder, Sun Yat-sen: “The whole world is one family.”

Israel Showcases Its Brain Power on a Receptive World Stage