Mideast Negotiator ‘Not a Believer’ Now 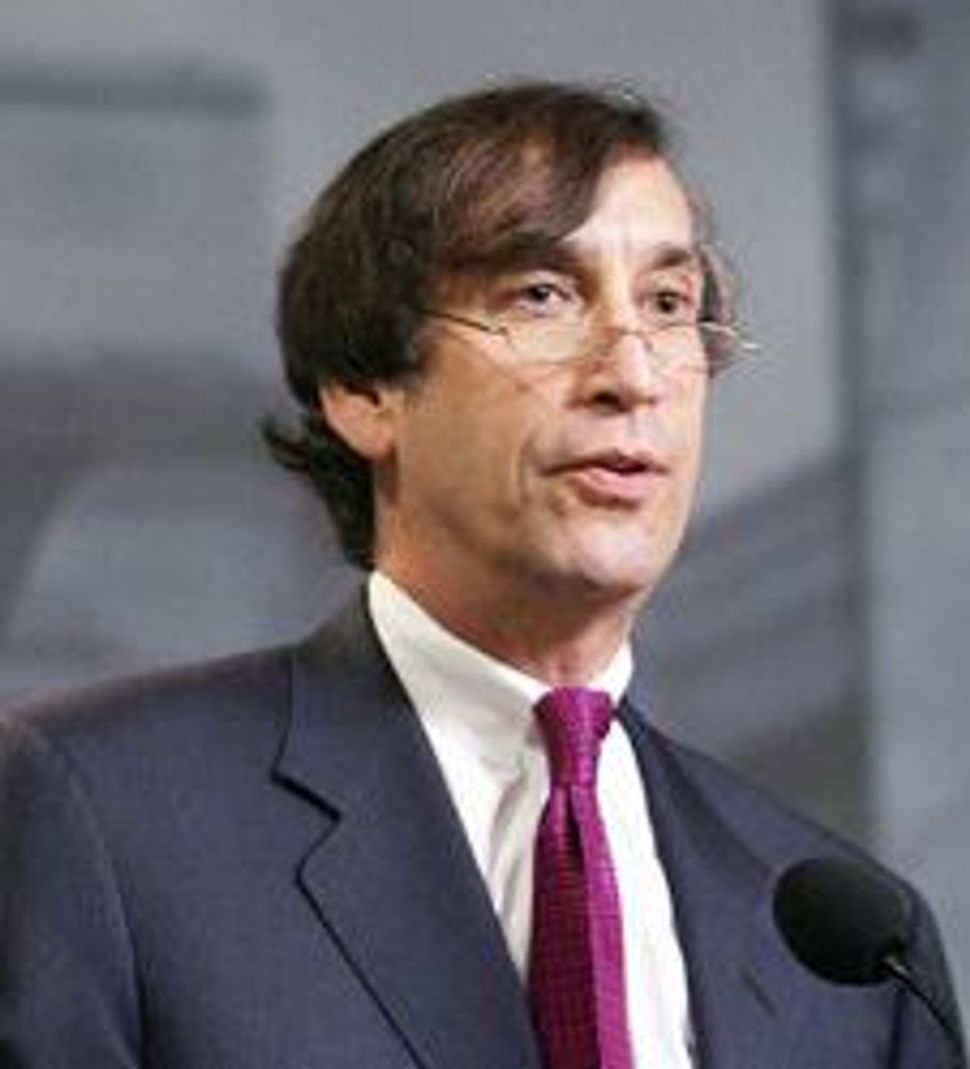 The cover of Foreign Policy magazine’s latest edition is bright pink and carries a single quote: “For 30 years Mideast peace was my religion. I’m not a believer now.” Below is a crumpled up photo of Bill Clinton, Yitzhak Rabin and Yasser Arafat shaking hands on the White House lawn.

Once it landed on desks of Washington Middle East policy wonks, the article created a stir, generating a slew of reactions for and against the idea of limiting United States involvement in Middle East peacemaking.

And that is exactly what the quote’s author, veteran peace negotiator Aaron David Miller, had wished for.

“I was always the most annoyingly negative one of the bunch,” Miller said of his days with his former colleagues on the State Department’s Middle East team. “I’m not running for any job, and I don’t want to be in the administration. I’m just trying to get the clarity and honesty that we didn’t have in the past.”

Miller’s idea of clarity and honesty comes in the form of a 4,500-word essay questioning the paradigm of the United States as the indispensable player, obliged by its ideals and its national interests to strive to bring peace to the region. Just as a president finally comes to office vigorously upholding this paradigm — the very one he himself so long touted — Miller, running in the opposite direction, terms this “a false religion.”

For many who are still involved in the efforts, Miller gave up too early.

“Miller is understandably unhappy with the track record of U.S. peacemaking efforts,” said Stephen Walt, Harvard University international relations professor. “I can understand his reaction and even sympathize with his feelings, but it’s not going to make things any better.”

Walt, has become a lightning rod for criticism since his 2006 essay asserting that the influence of the pro-Israel lobby has distorted U.S. national interests.

Controversy is nothing new for Miller, who at a much earlier stage had described himself as “Dr. No” because of his skeptical views on prospects of peace. Later, after America’s triumph in the first Iraq War, in 1991, he turned, according to his own account, into “Dr. Yes,” enthusiastically believing that peace was on its way if America used its diplomacy. Still later, Miller ended up as “Dr. Maybe,” once again questioning the core belief that Middle East peacemaking is a key interest of the United States and that it should be pursued vigorously.

The main argument of Miller’s article is that belief in the power of America to promote peace between Israelis and Arabs has become a kind of religious faith and that those promoting it are true believers. It is a religion with followers who do not dare to examine its underlying foundations.

“Like all religions, the peace process has developed a dogmatic creed, with immutable first principles,” Miller stated in his article. “Over the last two decades, I wrote them hundreds of times to my bosses in the upper echelons of the State Department and the White House; they were a catechism we all could recite by heart.” These principles included viewing the pursuit of peace as America’s core interest in the region, believing that it can be achieved only by negotiations based on the land-for-peace formula, and by seeing America as the only power that can help broker peace.

Instead, the former peace negotiator suggests what he calls a “sober view of what’s possible,” and an understanding that the United States needs to choose its priorities. The Middle East, Miller argues, where there is “more process than peace,” is not a top priority now.

“The United States needs to do what it can,” he concludes. “But America should also be aware of what it cannot do, as much as what it can.”

Miller, 61, has been dealing with Middle East peacemaking for more than two decades, much of this time at the top reaches of the American government. He has served as a senior official for the Middle East peace process in the administrations of Ronald Reagan, George H.W. Bush, Bill Clinton and George W. Bush. Although he never headed the administration’s peace team, Miller was often the No. 2 man, and at the center of efforts that included the Madrid Conference, the Oslo Accords and the 2000 Camp David Middle East Peace Summit. It was the failure of this summit that renewed the seeds of skepticism in Miller’s worldview. “I am a product of the Camp David experience, and that is one of the reasons I’ve become so critical of the process,” he said in a May 7 phone interview while he was in Israel.

This inner doubt grew stronger after he left the Bush administration in 2003. Veterans of the Clinton-era peace team broke into roughly two camps, and Miller, alongside Robert Malley, a former Clinton National Security Council aide, openly criticized the way the Clinton administration had managed the talks. Miller famously accused the United States of serving in these talks as “Israel’s lawyer.”

The other camp, which included Dennis Ross and Martin Indyk, maintained that responsibility for the talks’ failure rested with the Palestinians.

Miller, who lives in Chevy Chase, Md., was born on his mother’s side of the family into the wealthy, prominent and strongly Zionist Ratner family in Cleveland. His grandfather, a successful real estate developer, was close to David Ben-Gurion and Golda Meir, and his father was a major fundraiser for Israel and a personal friend of Rabin.

But his years in the Middle East as a young scholar, and subsequent decades of work on peace negotiations, have shaped Miller’s views of the Jewish state into something more nuanced and complex. This has often put him at odds with Israelis sitting across from him at the negotiating table. Miller still believes that America’s most successful secretary of state in terms of Middle East peacemaking was James Baker — an anathema for many Jews — who did not hesitate to lean forcefully on Israel to start a process of negotiations.

After leaving the government, Miller served for three years as president of Seeds of Peace, a not-for-profit organization that brings together young leaders from both sides of the Middle East conflict. He is now a public-policy fellow at the Woodrow Wilson International Center for Scholars.

Miller’s loss of faith in the peace process “religion” triggered a wide spectrum of reactions. Former Middle East hands seemed to share his pessimism, although not necessarily his conclusion.

Malley, who now heads the Middle East program at the International Crisis Group, said he had also noticed the reluctance of policymakers to question core beliefs of Middle East peacemaking. He viewed Miller’s article as a “useful service” for those still in government. “Aaron is maybe at the stage of thinking that there is no solution,” Malley said. “I’m not there yet.”

Miller, speaking after the first round of reactions to his article died down, seemed to pull back a bit from the rhetoric of religious apostasy he had adopted. He said that many critics of his piece had distorted his message. “I didn’t say we should disengage [from Middle East peacemaking], but rather that we need to be smart and find the right balance between our interests,” he said.

That balance is especially important now, since Miller believes that President Obama is nearing a point of diving into the Middle East conflict with his own peace plan. It’s a step that Miller views as a big mistake. His message to the president is, “Above all, be careful.”

Mideast Negotiator ‘Not a Believer’ Now