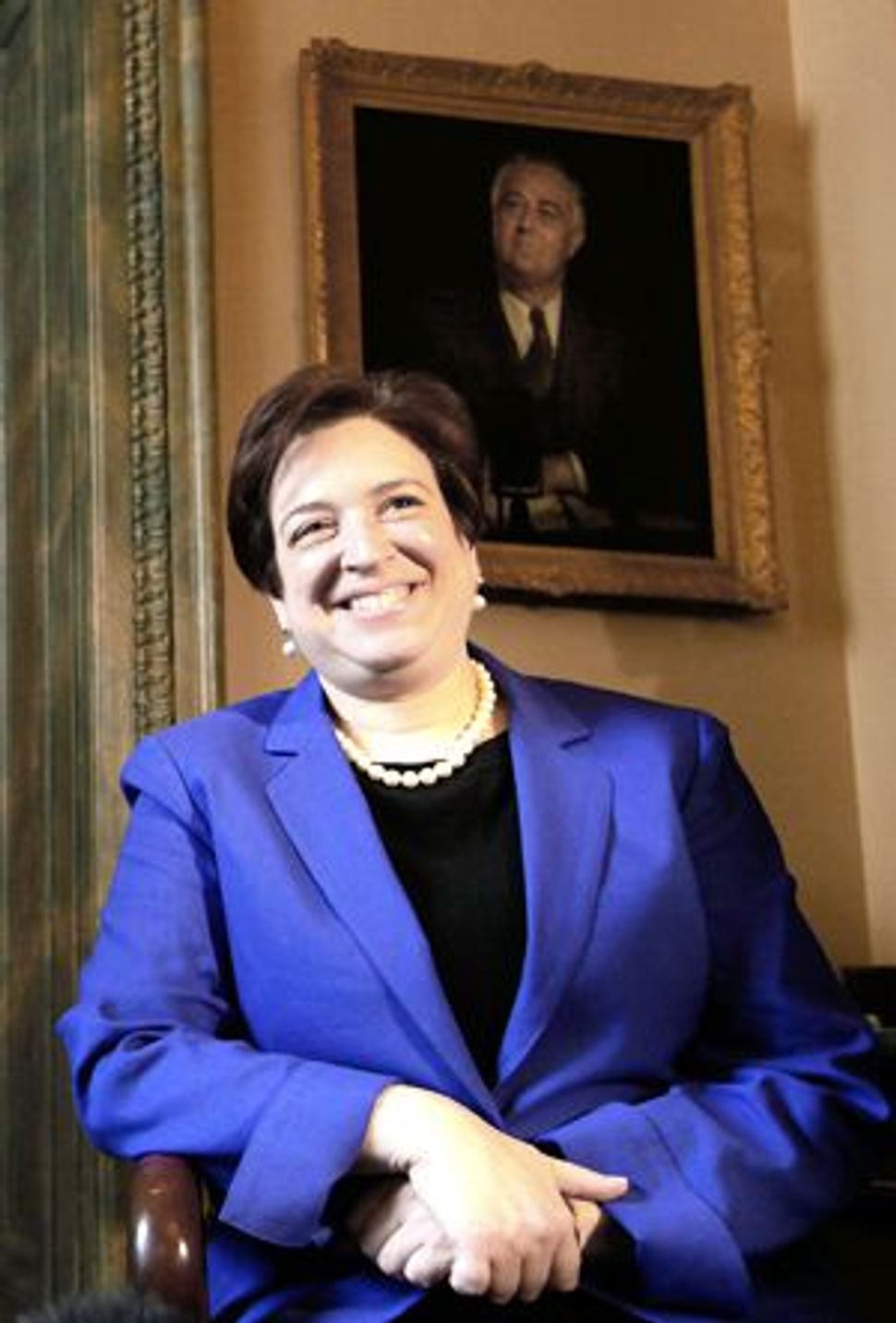 Madame Justice?: Elena Kagan tours Capitol Hill, a world away from the 1970s Upper West Side. Image by GETTY IMAGES

The small apartment building at 320 West End Avenue occupies a choice spot on Manhattan’s Upper West Side: a quiet, tree-lined avenue just around the corner from the popular Fairway Market and a block from Riverside Park. The lobby, sparse but elegant, is guarded by a uniformed doorman who welcomes residents as they return home on a spring evening. 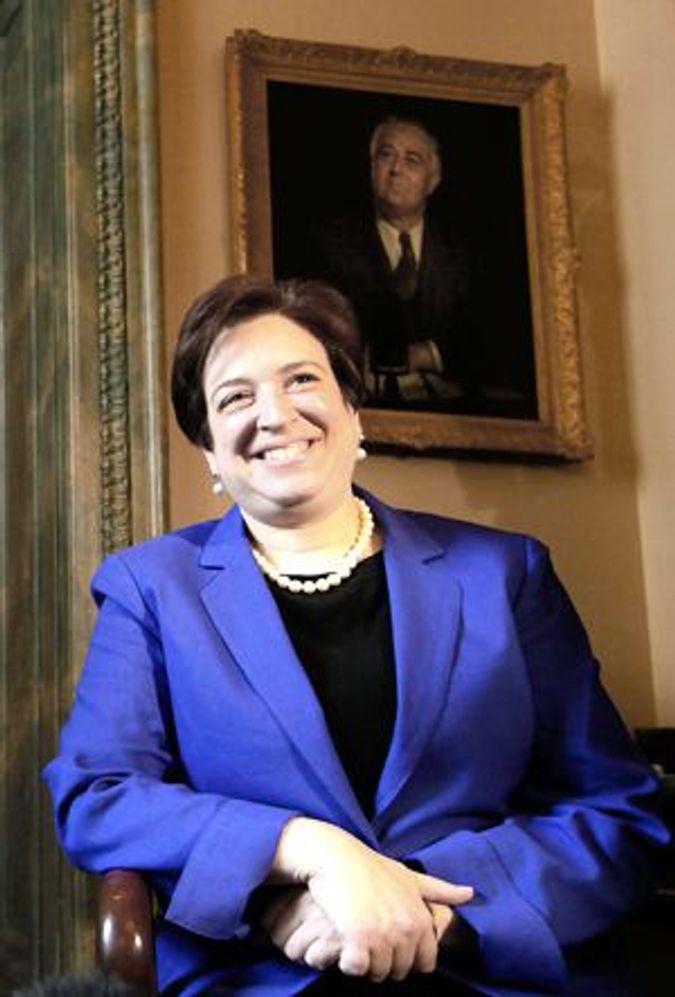 Madame Justice?: Elena Kagan tours Capitol Hill, a world away from the 1970s Upper West Side. Image by GETTY IMAGES

Decades ago, this building was the home of Elena Kagan, President Barack Obama’s solicitor general and now his nominee to fill the Supreme Court seat soon to be vacated by Justice John Paul Stevens. Now gentrified and upper-middle class, this block has not always been so comfortable. In the 1960s and 1970s, when Kagan was growing up here, the Upper West Side was a still a sketchy and turbulent neighborhood known as a left-wing Jewish bastion.

“There was a kind of radicalism that wasn’t just idealism,” said Deborah Dash Moore, a professor at the University of Michigan who knew Kagan’s parents. “You were living it.”

Kagan, 50, grew up in the West End Avenue co-op, which has about 35 spacious, high-ceilinged apartments. Her family’s two-bedroom apartment — 3B — was sold by her mother’s estate in May 2009 for $1.3 million. The years that Kagan lived there were troubled ones for the neighborhood, when increasing ethnic diversity led large numbers of Jews to leave.

“It’s really important, I think, that her parents don’t decamp to the East Side — that they remain committed to the kind of ethnic and class diversity that was the Upper West Side in the ’60s and ’70s,” Moore said.

Jews moved en masse to the Upper West Side at the beginning of the 20th century, when the opening of the subway system made it a convenient ride to the garment district, where many of them worked. Apartment buildings, built to replace row houses just before and after World War II, attracted affluent Jewish families looking to rent.

But during the Depression, parts of the sprawling neighborhood — which encompasses the entire western side of Manhattan between 59th Street and 125th Street — began to deteriorate.

“From the [nineteen] twenties up through the seventies and eighties this was a very déclassé neighborhood,” said Peter Salwen, the author of “Upper West Side Story: A History & Guide.” “Great big hunks of this neighborhood were very run down.”

As the Upper West Side grew more ethnically diverse, with Puerto Rican immigrants and others moving in, Jewish families began to grow uneasy in their changing surroundings.

For Moore, the fact that the Kagans chose not to leave speaks to their values. “I think it says that they’re really cosmopolitan New Yorkers,” she said. “They valued New York liberalism, which meant social welfare; it meant a version of integration.”

Kagan’s undergraduate thesis at Princeton, titled “To the Final Conflict: Socialism in New York City, 1900-1933,” traced the Socialist Party’s failure to gain popular support in America. Her thesis adviser, the historian Sean Wilentz, told the New York Times that the fact that she wrote about the socialist movement did not mean that she supported it.

But left-wing politics were not foreign to the Upper West Side milieu in which Kagan was reared. Bella Abzug, a feminist and an outspoken opponent of the Vietnam War, represented the neighborhood in Congress during the 1970s. Residents saw themselves as members of a social and political vanguard.

“It’s a neighborhood which not only encouraged precocity but which fostered a self-image of the entire neighborhood as precocious. In that sense, the East Side was beneath them,” said Leonard Fein, a Massachusetts-based writer and Forward columnist who has a time share on the Upper West Side. “I’ve had long discussions with East Siders about how they can possibly live in that upper bourgeois neighborhood,” he said, only half joking.

Jewishness was central to the identity of the neighborhood, according to Paula Hyman, 63, a Yale history professor. “The Upper West Side is to my generation, and to [Kagan’s] too, I think, what the Lower East Side was to the immigrant generation,” she said. “It was the kind of place where you could be Jewish just by walking down the street.”

For Kagan, this meant growing up in a neighborhood full of possibility.

“Kagan grows up in a world where the prejudice against women is being dismantled as she’s becoming a teenager,” said Moore. “I think that the Upper West Side in the fifties and sixties was that kind of place — where you could imagine yourself a Jewish girl going as far as you wanted to go.”

Neighbors and fellow congregants of the Kagans spoke warmly of Elena’s parents.

“He was a very lovely guy,” said Stanley Engelstein of Robert Kagan, her father. Engelstein has lived in the building for decades, and served on the co-op board with Robert.

“He could be calm in the midst of real argument,” Engelstein said.

Robert, who was a lawyer active in community politics, died in 1994. Elena Kagan’s mother, Gloria Gittleman Kagan, was a teacher at the elementary school affiliated with Hunter College, where her daughter went to high school. Gloria Kagan died in 2008.

Kagan received degrees from Princeton and Oxford universities and Harvard Law School before landing clerkships for Judge Abner Mikva and Justice Thurgood Marshall. She was a tenured law professor at the University of Chicago, a member of the Clinton administration, the dean of Harvard Law School, and is the first woman to serve as Solicitor General.

Neighbors said that Gloria Kagan was proud of her daughter, but didn’t boast.

“Somebody would see the article [about her daughter] and call her, as opposed to her calling everyone and saying, ‘Did you see it,’” said Shelley Fieland, a longtime resident of the building.

Moore said that Gloria Kagan used to attend services at the Reconstructionist West End Synagogue every week. Robert was a trustee of the congregation, but both joined after their children had grown. Previously, the family belonged to B’nai Jeshurun, a Conservative synagogue.

The news that Kagan had been tapped by Obama as his choice for the nation’s highest court was the talk of 320 West End Avenue this week.

“I just feel terrible that her parents aren’t alive to see this,” said Leni Brawer, a neighbor.