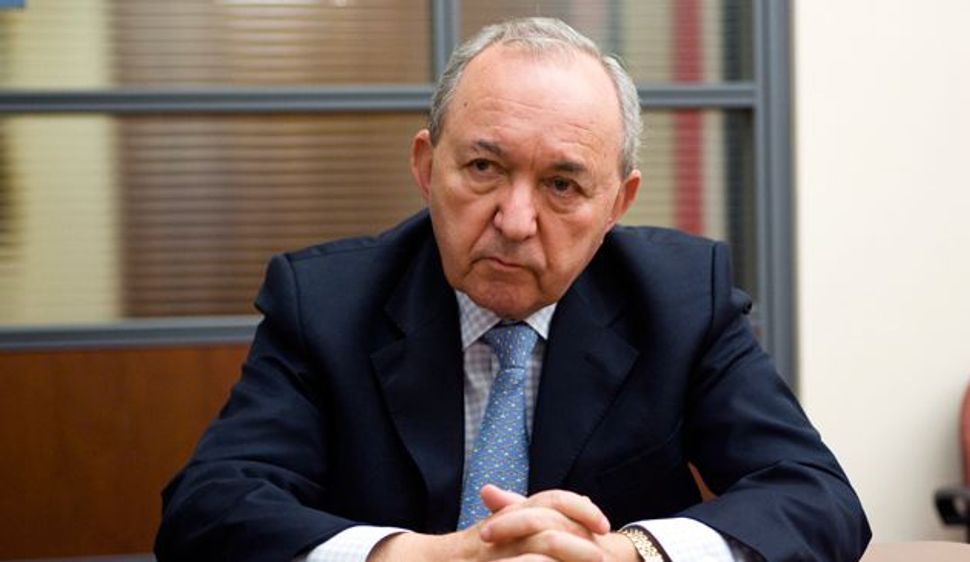 Two weeks after pro-Israel groups in South Africa withdrew threats to picket Richard Goldstone at his grandson’s bar mitzvah, Israeli critics are charging that the former judge “mercilessly” sentenced dozens of blacks to death on behalf of the apartheid era regime during his judicial tenure.

The charges, aired in a page-one article in Israel’s largest daily newspaper, Yediot Aharanot, were quickly seized on by senior Israeli officials and some prominent American Jews in their campaign against the man who headed the United Nations commission that alleged Israel and its adversary, Hamas, committed war crimes during their winter 2008-2009 conflict in Gaza.

Israel’s deputy foreign minister, Danny Ayalon, was one of several high-profile figures who compared Goldstone to the Nazis.

“I don’t want to exaggerate,” he told Israel Radio, commenting on Goldstone’s position that he was bound as a judge to enforce South African law then, “but these are the same explanations we heard in Nazi Germany after World War II.”

Harvard law professor and pro-Israel advocate Alan Dershowitz compared Goldstone to Nazi SS officer and torturer Dr. Josef Mengele. “That’s what Mengele said, too,” he told Israel TV Channel 2. “‘We just followed the law.’ When you are in an apartheid country like South Africa, you don’t follow the law.”

In an e-mail exchange with the Forward, Goldstone said the report was based on old news, shorn of key context. “The article reveals nothing that has not been a matter of public record for the last three decades,” he wrote.

Goldstone’s defenders argue that, while he was obliged as a jurist to enforce the apartheid regime’s racist laws, Goldstone also issued rulings and pursued investigations that did much to dismantle that same system.

“Not every judge appointed during the apartheid era was a supporter of apartheid,” wrote Arthur Chaskalson, who was appointed South Africa’s first post-apartheid chief justice by President Nelson Mandela, in a statement he issued with George Bizos, a longtime friend and lawyer of Mandela. ”There were a number among them, including Richard Goldstone, who accepted appointment to the bench in the ’70s and ’80s in the belief that they could keep principles of the law alive.”

The charges were the latest attack on Goldstone’s character since the U.N. commission he headed published its report in September 2009. Israeli officials view its findings as threatening the state’s very legitimacy, all the more due to Goldstone’s reputation as a jurist who helped end apartheid, and also because he is a Jew and self-described Zionist. They adamantly deny the report’s war crimes allegations.

In his e-mail exchange with the Forward, Goldstone pointed to the fact that Mandela appointed him to serve on South Africa’s post-apartheid Constitutional Court as evidence that his rulings under apartheid were not out of line. “South Africans, who are of course familiar with my record and with apartheid, have not made the sort of allegations that certain members of the Israeli press and government are currently making,” he wrote.

The investigative report, by Yediot staff writer Tehiya Barak, stated that Goldstone “sentenced dozens of blacks mercilessly to death” during his tenure as a trial judge and then on an appellate court in the 1980s and 1990s. The article specified later that he “sentenced at least 28 black defendants to death,” appearing to conflate those he sentenced as a trial judge and others whose cases he reviewed as an appellate judge. Most were found guilty of murder. The contexts were not political.

The story reported that “Goldstone sided through and through with the racist policies of the Apartheid regime” even on less serious crimes. It cited his ruling in favor of the whipping of four blacks found guilty of violence and his reversal of the convictions of four police officers who broke into a white woman’s house on suspicion that she was conducting sexual relations with a black man — considered a crime under apartheid.

In another incident, the story said, Goldstone ruled in favor of sentences for two young black men “merely for being in possession of a video tape showing a speech given by a senior official in Nelson Mandela’s party.” The article does not specify the sentence.

The article concluded that Goldstone should “look long and hard in the mirror and do some soul-searching before he rushes to criticize others.”

South Africa maintained the death penalty, which was applied disproportionately to blacks until 1995. That year, the post-apartheid Constitutional Court — which included Goldstone as one of its members — ruled unanimously that the death penalty was unconstitutional, ending the practice.

Goldstone acknowledged to the Forward that as a trial judge he sentenced two convicted murderers to death. He said he did not keep count of the number of death penalty appeals that failed before him as an appellate judge. He maintained that some of the cases cited by Yediot “are taken out of context and misrepresented.”

He told the Forward that many of the decisions he made on the bench were “extremely difficult ones” and said he had always admitted “the difficult moral issues that had to be faced in taking an appointment on the apartheid bench.”

Goldstone was one of several liberal South Africans who accepted judicial appointments during the apartheid era. Goldstone has explained his decision to accept the appointment by citing the belief that he could reform the system from within. He has described the decision as “the most difficult of my career,” due to the risk that he would grant legitimacy to the regime.

While Goldstone, as reported by Yediot, adhered to apartheid laws, he is also credited with having used his judicial power to under-mine some racial restrictions. In 1986 he handed down a decision limiting the government’s ability to evict black people living in neighborhoods designated for whites. This decision paved the way for abolishing racially based residency restrictions.

Goldstone is also credited with having helped bring down the curtain on apartheid through a government-commissioned investigation he led that exposed the existence of covert state-sponsored terror units deployed by South Africa against its own black citizenry.

“He was brave. He could’ve been killed,” Benjamin Pogrund, a former South African journalist and founder of the Yakar Center for Social Concern in Jerusalem, told the Forward in September 2009, shortly after Goldstone’s commission released its report.

Still, for many Israelis and pro-Israel activists, the apartheid-era decisions handed down by Goldstone and detailed in Yediot were viewed as a blow to Goldstone’s credibility.

Sasha Polakow-Suransky, a South African Jew and fellow at the U.S. Council on Foreign Relations, urged Israel not to continue down the path forged by Yediot. Polakow-Suransky, who recently published a book on Israeli-South African relations during apartheid, noted that Israel had served as Pretoria’s primary arms supplier during that period. Writing on Foreign Policy’s website, Polakow-Suransky called on Israel to examine its own “shameful history” before criticizing Goldstone.

In his e-mail to the Forward, Goldstone wrote: “I have been judged by my fellow South Africans and by President Mandela for my role both during and after apartheid, and I find it curious that no one in Israel ever raised the issue except to laud me, prior to my Gaza report.”