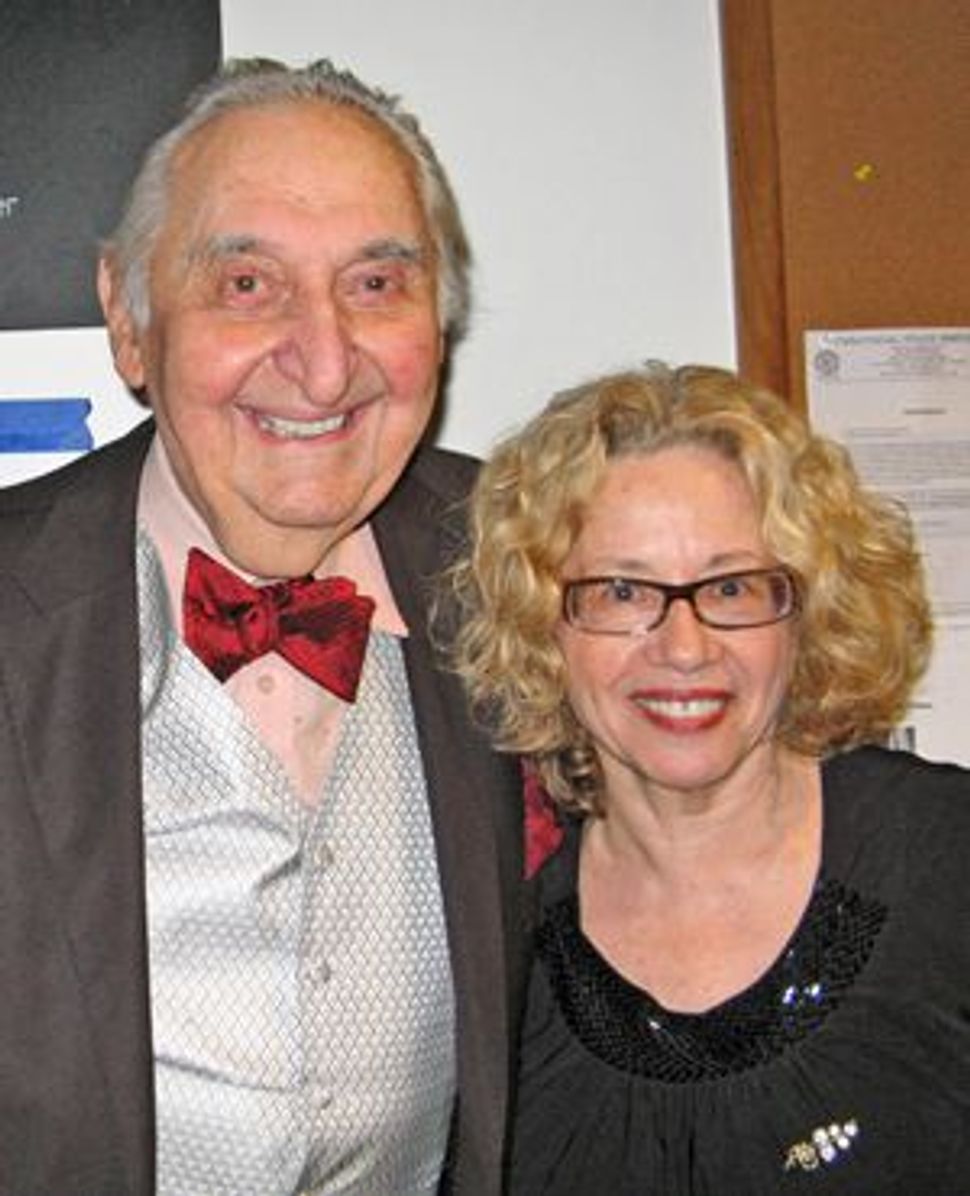 “I have no enemies in the profession — I’ve outlived them all!” declared stage, film and television actor Fyvush Finkel, who, with director, actor, and playwright Eleanor Reissa, co-hosted the May 2 National Yiddish Theatre-Folksbiene Gala at Frederick P. Rose Hall, Home of Jazz at Lincoln Center.  “Being 87 is no big deal here,” Finkel said to the seniors in the audience, many of whom had helped keep alive for 95 years the world’s oldest forum for Yiddish theater. 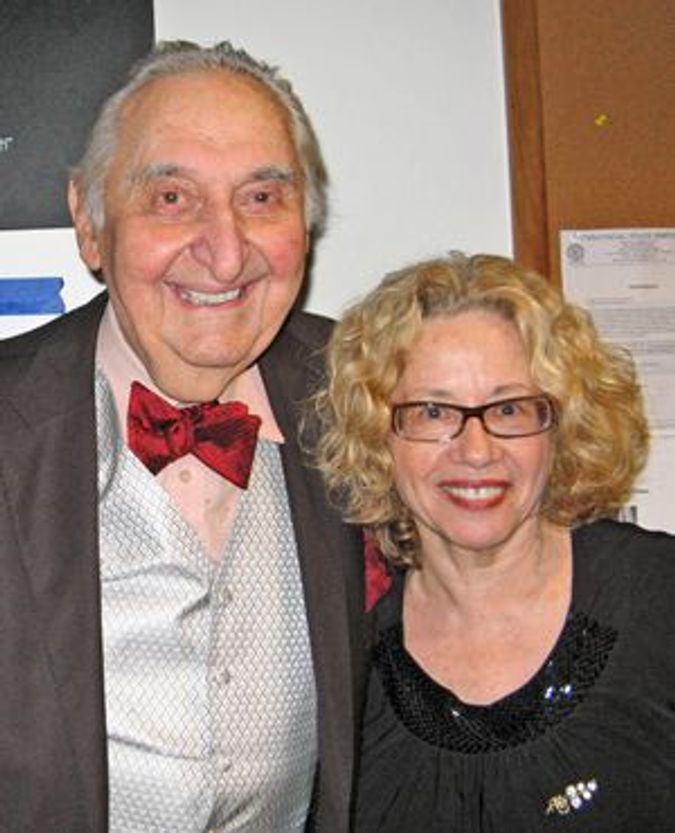 “Think about 100 years,” said Folksbiene’s chairman of the board, Jeff Wiesenfeld, as he introduced honoree Joel Klein, chancellor of New York’s public school’s, who touted the need to “protect and promote Jewish art.”    The delightful, entertaining evening included a stunning performance by Chava Alberstein, who is Israel’s famed interpreter of Yiddish songs, and musical and dramatic presentations by the Yiddish Theater in Israel’s Anat Atzmon, Shmuel Atzmon-Wirtzer and Monica Vardimon.  Ensuring that, as Wiesenfeld said, “Folksbiene will make it to 100” — and beyond — was the evening’s cast of young Jewish talent: Daniella Rabbani, Allen Lewis Rickman, Yelena Shmulenson, Dani Marcus, Stuart Marshall, Avram Mlotek, Marissa Mlotek, Nimmy Weisbrod and Rachel Arielle Yucht.  The program was under the baton of Folksbiene pianist and musical director Zalmen Mlotek.   As a tribute to the “Grand Dame of Yiddish Theater” Mina Bern, who passed away in January — and her late husband and acting partner, Ben Bonus — Shmulenson and Rickman (a husband-and-wife team) performed an edgy and side-splitting Bern-Bonus signature confrontation skit (in Yiddish, with English and Russian supertitles).  Shmulenson and Rickman also starred in the opening sequence of the Coen Brothers’ Academy Award nominated film “A Serious Man.”   The gala paid tribute to the great Yiddish poet Avrom Sutzkever, who passed away in January in Tel Aviv at 96.  Also remembered was Sara Mlotek Rosenfeld (the younger sister of Yosl Mlotek), a Yiddish writer, singer, director and translator. Rosenfeld, who died in 2004, was also a contributor to the Forverts. Founder of Klez Kanada, a Yiddish arts festival, Rosenfeld was awarded in 2003 the Order of Canada, the country’s highest civilian honor, which recognizes, according to the gala’s journal, “a lifetime of outstanding achievement.”    In keeping with the evening’s commemoration of the 10th Yortsayt of Yosl Mlotek — known affectionately as “the address for Yiddish” — the Mlotek Prize was presented to Bryna Wasserman, artistic director of the Dora Wasserman Yiddish Theatre. Mlotek Prize recipient Aaron Lansky, president and founder of the National Yiddish Book Center in Amherst, Mass. — which now houses 1 million Yiddish volumes — offered his thanks via video from Canada.    In a film clip, the conductor of the San Francisco Symphony orchestra, Michael Tilson Thomas (grandson of Yiddish Theater heartthrob Boris Thomashefsky), paid tribute to Chane Gordon Mlotek, who, with her late husband, Yosl Mlotek, compiled two volumes of Yiddish songs and poetry — a treasure for generations to come.   In what could have been headlined as “A Miracle for the Yiddish Theater,” the gala journal posted the following acknowledgement: “In Memory of Michael ‘Mickey’ Ross — With Sincere Gratitude.”

The text read: “In August 2009 we received word that the Emmy Award-winning television writer-producer Michael Ross, who died in May in Los Angeles at age 89, had singled out The National Yiddish Theatre-Folksbiene in his will with a gift of $500,000. Ross, who grew up in a Yiddish-speaking household in Brooklyn, and was a voracious reader and fan of Yiddish throughout his life, had no pre-existing ties to the company other than as an audience member. With his writing partner, Bernie West, Ross wrote more than 30 “All in the Family” episodes from 1971 to 1975 (for which he received an Emmy in 1973). He launched the television show ‘The Jeffersons’ and then created ‘Three’s Company.’”   As the journal entry notes: “Mr. Ross’s gracious gesture is a testament to his faith in The National Yiddish Theatre-Folksbiene for keeping the Yiddish language and culture exciting and relevant for this and future generations.”

“Tonight is our largest turnout to date,” said the Jewish Community Relations Council of New York’s president, Janice Shorenstein, at the JCRC’s April 27 gala at The Pierre, touting the 550 guests who helped raise $1.3 million for the JCRC.         Responding to the applause that greeted him, New York City Mayor Michael Bloomberg said, “Where were you when I put the smoking ban in?”  Lauding the JCRC for being “a partner in keeping the city safe and secure,” the mayor commented somberly: “Israel doesn’t have many friends…. America’s future is tied to the security of Israel.”   John Ruskay, executive vice president and CEO of UJA-Federation of New York, declared: “We take pride that [in the] last two years we have not curtailed services.” He added, “We are a noisy Jewish community, but we stand together with Israel in its pursuit of peace.”    Asaf Shariv, Israel’s consul general in New York, expressed gratitude “to the JCRC for standing with Israel,” and praised the organization for having “changed the way others view Israel [through] its sponsorship of trips to Israel.”  Dubbed by Shorenstein as “JCRC’s guardian angel,” award presenter Roger Ailes, chairman and CEO of Fox News and 2005 JCRC-NY gala dinner guest of honor, informed everyone that public relations maven “Howard Rubenstein brought me to the JCRC.  It was a wonderful shiddikh [match].”   In presenting JCRC’s Generation to Generation Award to Jeffrey Levine, founder and chairman of Douglaston Development and Levine Builders, and his son, Benjamin Levine, the company’s project manager, William Rapfogel, CEO of the Metropolitan Council on Jewish Poverty, offered the parable: “One volunteer built the Ark.  Thousands of professionals built The Titanic.”    The gala’s journal informs: “The Levines have built, renovated, rehabilitated thousands of residential units… millions of square feet of commercial space, retail centers, religious, educational and health care facilities.” Benjamin Levine recalled memories of “Shabbat dinner, walking home from shul,” and his direction to “a Jewish career… building low-income housing.”   Jacques Brand, managing director and co-head of global corporate finance at Deutsche Bank, presented the JCRC’s Continuing Legacy Award to Bennett Golub, vice chairman, chief risk officer and co-head of BlackRock, a $3.4 trillion money manager. Golub informed: “My three children all attend the Solomon Schechter School in Westchester…. One summer they spent one week in Poland — and seven weeks in Israel…. My father, a Holocaust survivor, during Shabbat dinner [always] opened a window before the blessing.  He wanted neighbors to know what he was doing.” With his father, he wrote the 2005 “Kaddishel: A Life Reborn,” documenting his father’s personal history as a participant in three major historical eras: traditional life in a small Polish town, the Holocaust and the formation of the State of Israel.  Golub also co-wrote, in 2000, “Risk Management: Approaches for Fixed Income Markets.”   H. Mitsy Wilson, senior vice president of diversity development for News Corporation, accepted JCRC’s Corporate Leader Award from Ailes. Wilson, who oversees corporate outreach to diverse communities, including national education/recruitment campaigns and economics development initiatives, said: “I was the first African-American female in an all white school…. We came from a strong line of Guianese educators… used to changing the world…. [At News Corp] we parallel JCRC in building partnerships.” Wilson thanked Michael Miller, JCRC-NY executive vice president and CEO, and News Corporation Chairman and CEO Rupert Murdoch.