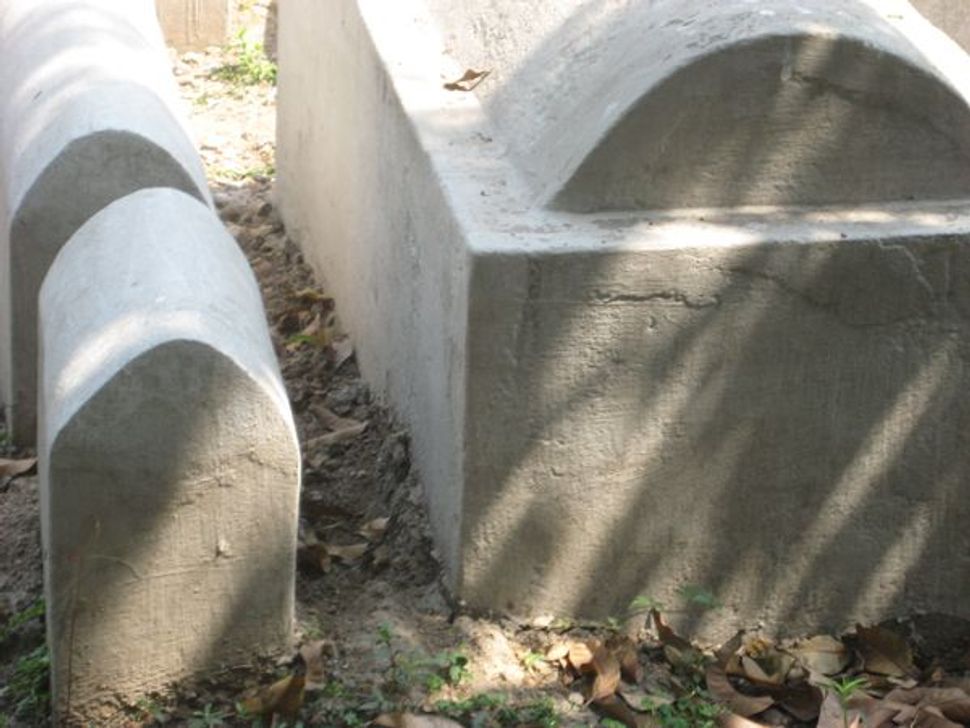 A small tombstone containing a child next to an adult tombstone at Calcutta?s Jewish Cemetery. (Photograph by Robert Hirschfield)

Nahoum & Son’s Bakery, in the labyrinthine New Market in central Calcutta, is the embarkation point for making contact with the city’s Jewish community. David Nahoum, its undisputed leader, said to be about 90 and in ill health, no longer sells plum cakes, greets visitors or gives interviews to reporters. The first two responsibilities have been outsourced to Mr. Hulda, Nahoum’s friend, business associate and a Hindu.

The Jewish community of Calcutta numbers fewer than 40. The average age hovers around 75. The three youngest members of the community, two brothers and a sister, are in their 30s, with the youngest, 35-year-old Mordechai Israel, in the process of making aliyah.

“We are a dying community. We know that,” said Ian Zachariah, a burly 66-year-old ex-ad man who worked in the Calcutta office of J. Walter Thompson. “We have another 10 years. Maybe a little more.”

The community began optimistically, wrapped in the mystery of the East. It started with Shalom Cohen’s arrival from Aleppo, Syria.

“He came over in 1784,” said Flower Silliman, who at 80 acts as the community’s unofficial historian. “He was the court jeweler of the Nawab of Oudh.”

Others followed from Aleppo and Jews from Iraq joined them. (This is a Baghdadi-Jewish community, the name given to Indian Jews who came from the Middle East.)

A light flickers in Silliman’s eyes when she speaks of the first settlers: “They were very adventurous. They were traders [her maternal grandfather was a trader] who traveled all over the East, cooking their own food on deck, because they ate kosher food and had to prepare it themselves.”

Silliman made an extraordinary journey of her own several years ago. She moved back to her native Calcutta after 30 years of residing abroad. (“It is home,” she said simply.)

Ever since the late 1940s, with India’s independence and the creation of the State of Israel, the migration of Jews from Calcutta, with the exception of Silliman and maybe a few others, has been irreversible. It’s hard to imagine the bustling community of 5,000 that existed in the city before World War II.

The terrible Hindu-Muslim carnage in Calcutta following the 1947 partition fueled Jewish insecurity. Many were also unsure what their place would be in the new, Hindu-dominated India.

But “antisemitism has never been a problem in India and we are grateful for that,” said Aline Cohen, 64, who took over performing the tahara (the Jewish ritual of purification in which a body is cleaned before burial) from women who had grown too old to minister to the dead.

Zionism had taken root among Calcutta’s Jews in the years prior to Jewish statehood. Silliman recalled a Mrs. Kreiger from Habonim Dror coming to East India to teach them Hebrew and the songs of the halutzim, or pioneers.

As the place that has absorbed so much of Calcutta Jewry, Israel is also a reflector of its strength. Cohen, like many, has children and grandchildren in Israel.

“I would love to live there, but I can’t shirk my responsibility here,” she said. Apart from her tahara tasks, in which Muslim women assist her, Cohen belongs to the school committee, the synagogue committee, and the committee to monetarily aid and physically assist the poor and the elderly. “We function as David’s arms and legs,” she said, referring to the bakery owner Nahoum.

Mordechai’s brother, Shalom Israel, 37, distributes money, visits the sick, assists the elderly. When Jewish men die, he performs the tahara. A weary-looking, slow-speaking man, he seems on the verge of blossoming into premature old age himself.

“Why does he stay?” Zachariah wondered. “Does he want to be the one to turn out the lights after everyone has gone?”

Shalom Israel finds nothing particularly melodramatic in his decision to stay. “Sure, I could go to Israel. Probably I could find a job there, maybe on a kibbutz. But why should I go? What can I contribute there? Here the community needs me.”

When a 90-year-old woman fell and broke her femur, Israel helped her into a rickshaw and trotted beside it through the murderous traffic of Mirza Ghalib Street.

Can he see himself living in Calcutta as its last Jew?

He is intimately familiar with last things. He is the caretaker for the Jewish Cemetery on Narkeldanga Main Road, a vast field of graves. Every Friday afternoon, he lights candles and says prayers in Calcutta’s three synagogues: Neve Shalom, Beth El and Magen David.

His are the only Jewish prayers that are heard there. The last minyan, he recalled, was in 2004, with the help of Jewish visitors from abroad. There was an attempt at one point to get expatriates to return for holidays so that the community could pray together a few times a year. But the attempt failed.

These days, groups of visitors, Jews and non-Jews, are taken on tours of the synagogues as if these places were relics of a community that has already ceased to exist.

Its two schools, the Jewish Girls School and the Elias Meyer Free School & Talmud Torah, are both thriving and well endowed, although Jewish studies are no longer taught there. They are highly regarded, English speaking schools that graduate Hindu and Muslim students. The girls school is 90% Muslim, according to Silliman, one of the graduates from its early days.

“It is in those schools that we will remain in Calcutta. They are the Jewish legacy to this city,” Cohen said.

Robert Hirschfield is a New York-based freelance writer whose work has appeared in the Jerusalem Report, Zeek, the National Catholic Reporter and other publications.