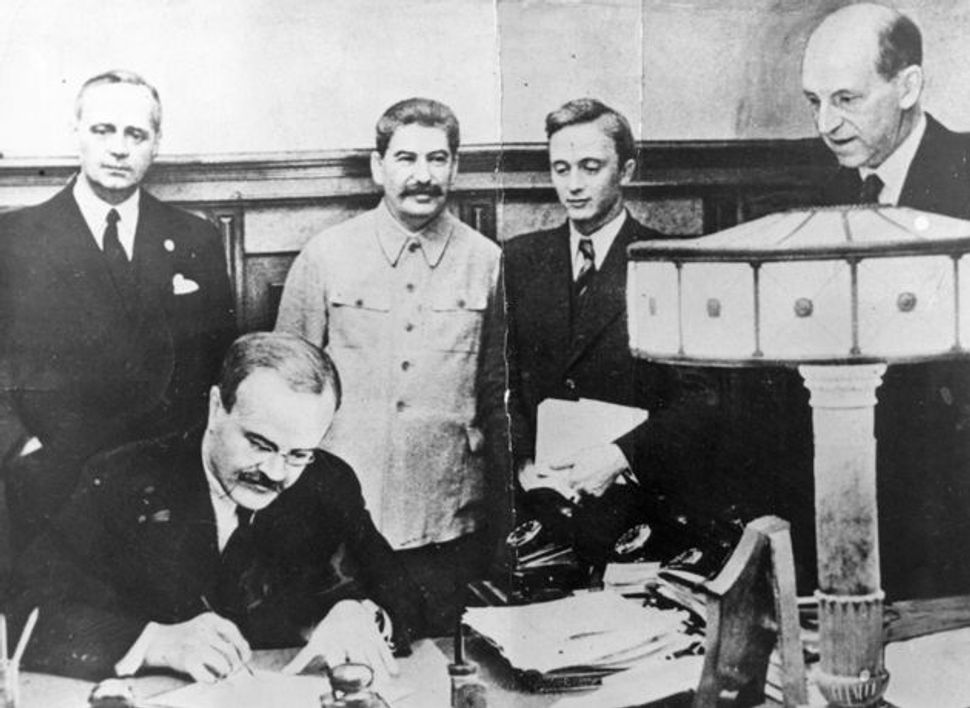 The Fire is Stoked on August 23, 1939: Vyacheslav Molotov, Russian foreign minister, signs a non-aggression pact that was negotiated between Soviet Russia and Germany at the Kremlin in Moscow. Standing behind him is his German counterpart, Joachim von Ribbentrop (left), and Joseph Stalin (center). Image by GETTY IMAGES

We now have what the world was dreading with fear and horror over the past years, even though we prayed in our hearts that it wouldn’t occur. We dreaded this, and our current days and those of our future are and will be truly days of awe.

The world is burning, dear readers, and as world events unfold, everything is in peril. The entire civilization — everything we imagined for the world — is in danger of being destroyed, annihilated and burned in blood.

The destruction of Europe is upon us. Now, before everyone’s eyes, scores of people are perishing in misery, millions at bloody graves, and in everyone’s ears are the sounds of wailing.

Let’s pay our debts and get clear on who is who and what is what. And let us always remember it so that our children’s children can retell it.

The fire starters of the world are the dictators. In recent days, as Hitler was throwing fits and demanding that Poland surrender, he already knew he was going to throw fire on Poland, and he even knew when he was going to do it.

People are now trying to guess if his convulsions were tremors of apprehension in his dog’s heart that he himself would get burned alive in the fire or if they were a put on in order to say that others started the war. Both elements were at play. The crazed dog from Berlin is gambling on his own dismal death, and the devil in him is playing with fire. But it will always remain in the memory of old and young that he was the fire starter, and young and old from all corners of the earth will be waiting with pounding hearts for his end to come … quickly.

Hitler has allies in his enterprise of setting the world on fire, and one of them — and probably the most important one — is Stalin. Look at what happened the night the world got incinerated. Hitler’s parliament was gathered in Berlin and Stalin’s parliament was gathered in Moscow. In Stalin’s parliament the democratic republics of England and France were made fun of. Litvinov was attacked for having been preoccupied with the insane notion that fascism had to be conquered. Stalin’s friendship with Hitler was praised. Immediately following, Hitler made a speech in his parliament, saying he’s signing with both hands everything that was said in Stalin’s parliament. And immediately, in the next minute, Hitler took matches in hand and went off into the bitter night to set the world aflame.

Was this all a coincidence? Can such dramatic occurrences happen by accident? Or do they harmonize because they are logically tied to one another, as if one conductor had designed the whole thing — one bloody conductor.

Stalin is Hitler’s partner in his setting the world in flames. Let us remember that. Let us pass it down to our children’s children. To convince the world of this, without making a mistake under any circumstances, a photo appeared in the press today, the day the earth began to burn, of Stalin squeezing the hand of Hitler’s messenger, the hand of Ribbentrop. And Stalin smiles throughout.

This is the first image, and it depicts Stalin with a smiling face. Until now, the world knew him as a silent type with a frozen appearance. Now he appears in good spirits. Stalin feels happy with his partner Hitler.

We are showing you all this now so that today and in the future, Jewish readers will remember, along with the rest of the world, that all peoples are this very day divided; on one side are the free democratic countries and on the other side are the enslaved peoples under the bloody heel of dictators.

The goals of the war between the two camps will therefore become clearer as we proceed, as it begins to spread beyond just Poland or any other land, as it starts to deal with the dictators’ desire to wipe out half the world.

We would very much like to know how to help the Jews of Poland upon whom have fallen the first flames of the war, and the Jews of other European lands where tomorrow the flames may fall — how we would like to help with a word of consolation and with a reassuring word that we will, from a distance, do everything to be their allies.

The world is on fire, dear readers, and we are calling on you to remember each hour, each minute, the great accountability of these days. We are all going to wait together for a swift end to the fire and also a quick end to those who lit the fires. We will wait for this together with all the oppressed people of the world.

The editorial was published on September 1, 1939, in the Forverts.