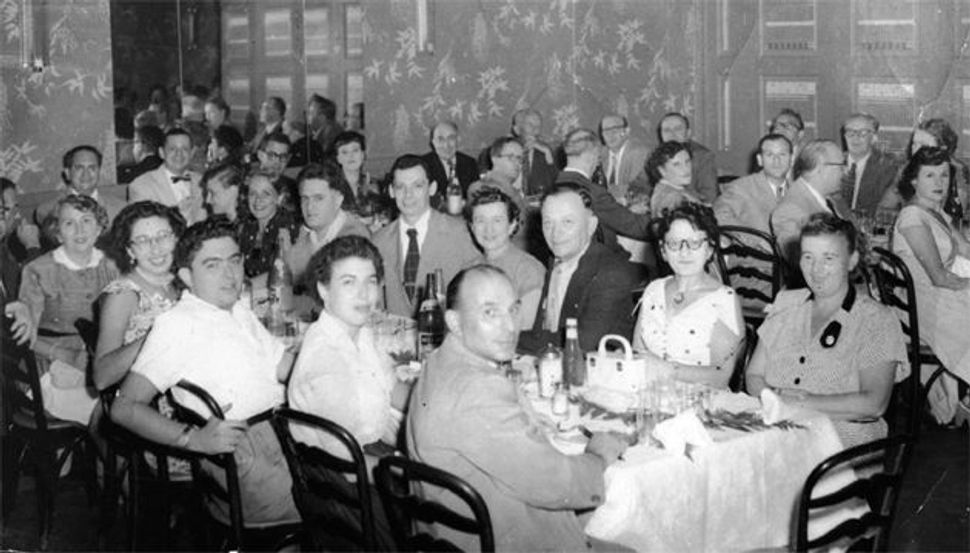 Fannie Jacobson remembers Abraham Cahan as a brilliant man who wrote like a dream and had a commanding presence in what was then the Forward’s headquarters on East Broadway.

His special lair was the newsroom on the ninth floor of the 10-story tower. But he made it his business to know everyone at the paper, where presses in the basement churned out a daily roadmap for Jewish immigrants who were just getting a toehold in America.

Jacobson remembers the building’s impressive lobby, an open floor where the business side of the newspaper conducted its work.

“They used to say in the building that if you sneezed on the main floor, they said ‘Gesundheit!’ on the 10th floor,” Jacobson said with a laugh. “They meant there were no secrets there.”

Jacobson, now 93 and living in New York City’s Gramercy Park neighborhood, was hired in 1948 as an assistant in the subscription department. She was perfect for the job — could she start the next day? — because she spoke good Yiddish, and all the calls back then were in that language. It also didn’t hurt that she was a socialist, the political language of the newspaper in those days.

Outside work, Jacobson remembers Cahan from the times he spoke at Socialist Party picnics. He often brought his wife, Anna, to those gatherings, but she was never part of life at the office.

Over the years, Jacobson moved up to be in charge of the subscription department, which also took on the job of publishing books, including those written by Cahan and others associated with the Forward.

When Jacobson began at the paper, Cahan was already in his late 80s and not feeling well, and was driven to work each day by a friend of her father’s. Even so, there was no question who was in charge.

“He was very much the editor,” Jacobson said. “If you walked up to the ninth floor and walked into the newsroom, you would stop immediately, because in front of you were rows of desks. Every writer had a desk. In the back of the room were four private offices. One of those was for Cahan.

“It was his custom to come in early and check everybody in. He sat in the back, in the center office. He watched everyone come in to work. He’d sit there, tapping his pen on his desk, waiting to see.

“He was an editor to the n-th degree. He was in charge. Everything had to go through him.”

Asked if she remembered his voice, was it booming or loud, Jacobson said no, it was just the opposite. “He was not a loudmouth. He had a very cultured voice,” she said. And to Jacobson, who polished her Yiddish at Workmen’s Circle/Arbeter Ring schools, he had one other aspect that she valued highly: “His Yiddish was magnificent. He wrote beautifully.”

In those years, among the Jewish immigrants coming to America from Eastern Europe in the early part of the 20th century, Yiddish was the first language, spoken at home. Russian or Polish was a close second, and English was the third language.

The paper that Cahan produced was written in straightforward terms that people struggling to find their way could understand. It offered advice — A Bintel Brief — on how to navigate life in the New World. It preached the gospel of learning good English, going to school, going to college, learning how to fit in and prosper in America. In its heyday, in the mid 1920s, the Forward sold 250,000 copies a day, the most successful non-English daily in the country.

The paper was a secular beacon for those who had left the shtetl in their native land and were learning to live in a big city in a foreign country, struggling to learn new ways. The paper was also a political force that drew important people to its building from around the nation and the world, and fueled the flame of the labor movement organizing the garment workers on the Lower East Side. During World War II, Cahan railed against the evil of Hitler and Stalin and published the first eyewitness account of the gas chambers, the horrors of life inside Treblinka. After the war, the paper carried thousands of classified ads placed by people searching for family members missing since the Holocaust.

“He had a wonderful vision of what the paper should be. He had everything in that paper,” Jacobson said. “You’d open the paper and see pages of men who had disappeared. Everything was so down to earth, like the Bintel Brief. Women wrote about how to dress, how to conduct yourself.”

Cahan had a very distinct view of how to present himself in public. Hundreds of photographs in the newspaper’s archives show Cahan dressed formally, in a suit, vest and tie. Did he ever come to work dressed down?

“Oh no,” Jacobson said. “He was always meticulously dressed. I don’t think he knew casual.”

“Sure, he would adjust. He was very worldly, he would travel a lot. He would do very well,” she imagined.

Jacobson worked at the Forward for 53 years, retiring in 2001. She was not part of Cahan’s inner circle, but knew him as a fellow socialist, from his speeches at dinners and picnics, and from what she saw of him working at the paper in what turned out to be his twilight years. Cahan died of congestive heart failure in 1951, a few years after his wife. Asked how she would describe him in just a word or phrase, Jacobson barely hesitated:

Lillian Swanson is the managing editor of the Forward.