A Lonely Synagogue on an Empty Island 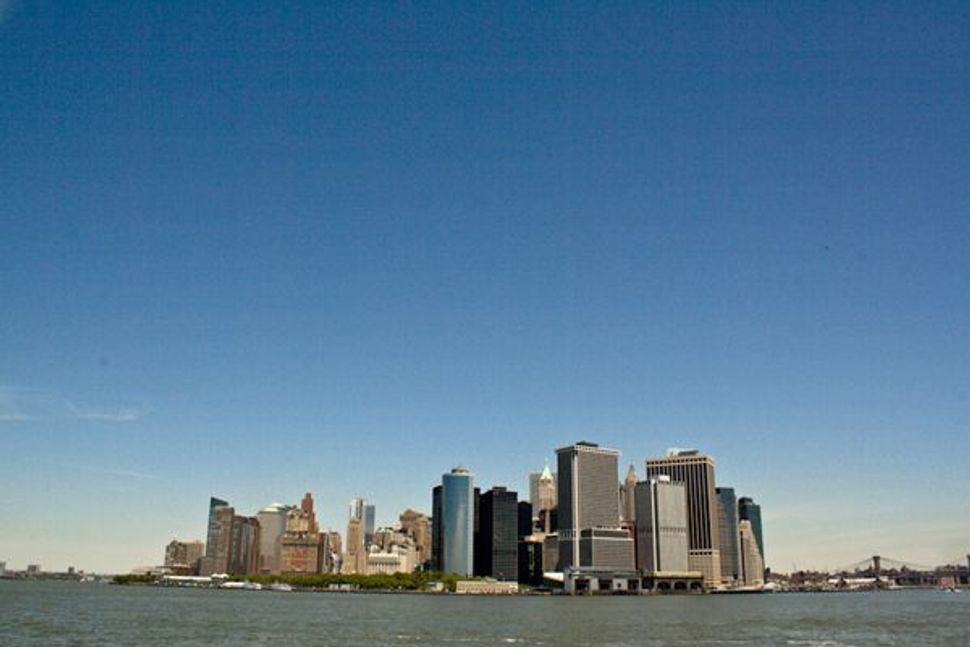 Lower Manhattan, again, from the ferry.

When the last rabbi left Governors Island, he took the Torah with him.

The island, 172 green acres in the middle of New York Harbor, was being demobilized after centuries of military service, and the U.S. Coast Guard command that was its final armed occupant was being taken apart.

“It was a trauma,” said Bill Kloner, the retired U.S. Navy Reserve captain who served as the rabbi of the island’s synagogue at the time of the base’s 1996 closing.

Just south of Manhattan, just west of Brooklyn and just east of the Statue of Liberty, Governors Island is still something of a mystery to most residents of New York. Closed for generations to all but military personnel and support staff, it is officially part of Manhattan, but has been in practical terms more remote than any of the other boroughs.

Now, 14 years after the base’s closing, the city has announced a plan to redevelop the island into a mixed-use public space, with parks, ball fields, rolling hills and some private development. Work won’t begin until 2012, but the island will be open for public exploration on summer weekends beginning June 5.

But in the spring of 1996, as the island’s 3,500 residents prepared to leave, its future looked bleak. “[N]o longer will the laughter of children be heard…the buildings and homes so ghostly silent,” lamented Kloner in The Governors Island Gazette, the base newspaper, in one of its last issues.

The congregation, called Shaare Shomayim, was housed in a low building originally constructed as a warehouse during World War I, when the island was a major U.S. Army staging ground. The building is just off Barry Road, behind the elegant single-family officers’ homes that look out across Buttermilk Channel to the Brooklyn docks.

When it was converted into a synagogue — the exact year is a matter of dispute — a Jewish star and Hebrew letters reading beit haknesset (“house of assembly”) were affixed above its door. The synagogue had stained-glass windows with nautical themes from the book of Psalms and, inside, a Torah.

The Torah had been brought to Shaare Shomayim by Kloner, who became the island’s rabbi in 1993. Previously, both he and the Torah had served the military base at Brooklyn’s Floyd Bennett Field. Years before, when a fire ravaged the building that housed the Jewish chapel at the field, a Presbyterian Navy pilot who had attended Jewish services there rushed inside to save the scrolls.

“It was a dangerous thing to do, because the entire chapel was consumed in flame,” Kloner said. “I think the only thing that’s left is our Torah.”

Kloner, who was promoted to the rank of rear admiral after his retirement, served at Floyd Bennett Field until 1980. He was also rabbi at Temple Beth Emeth of Flatbush, a Reform congregation in Brooklyn. Even after leaving the field, he remained active in military circles.

That included playing regular rounds of golf on Governors Island’s nine-hole course, which was built on a former Army parade ground. The Coast Guard, which took over the island in 1966, had no need for a parade ground, and so it put the space to this more recreational and practical use. The course, which was open to active and retired military personnel, was reputedly quite difficult.

“To be able to play golf in New York City at your whim with just a ride over on the ferry is a remarkable thing,” Kloner said.

Kloner recalled that he was asked to be the base’s rabbi during one of those golf games, when an acquaintance spotted him across the green. “He yelled over, ‘Hey, Bill, would you consider being the chaplain here?’ ‘You bet,’ I said,” Kloner recalled.

Several rabbis who previously served the congregation had been students at Manhattan’s Jewish Theological Seminary, the Conservative rabbinical school. Rabbi Joseph Schonberger, now of Temple El Emeth in Youngstown, Ohio, and Rabbi Stephen Shulman, now the rabbi at the Jewish Home for the Elderly in Fairfield, Conn., each served for a year or two on the base in the early 1980s.

“For me, it was like a retreat,” Schonberger remembered recently. Each Friday, he would take the seven-minute ferry ride from South Street across the harbor to the island, where he would lead afternoon services and host a lunch.

But according to one congregant who arrived at the island shortly before Kloner, the congregation came into its own with Kloner’s arrival.

“It became like a family,” said David Gabelman, who was a dentist on the island. Kloner led services on Fridays and taught religious classes on Wednesday afternoon to the congregation’s youngsters, including Gabelman’s son and daughter. The two celebrated their bar and bat mitzvah, respectively, in ceremonies led by Kloner on the island.

Besides the Gabelmans, the congregation included teachers from the island’s school for Coast Guard children and some retired members of the military. Gabelman maintained that there were few Jews among the island’s active-duty personnel, although Kloner said that there where some who attended the synagogue.

When the base closed, the Torah was sent to the chapel at Fort Wadsworth, the Staten Island Coast Guard base that took on some of Governors Island’s responsibilities and personnel. Kloner went there, too, and he continues to serve as that base’s rabbi.

On a spring weekday this May, when the island was open only to staff members and a few artists who had been granted studio space there, the place was like an abandoned New England suburb. Picturesque and leafy, the island is home to scores of buildings — some of them massive — that are almost entirely empty. A fort whose guns could supposedly rain fire on City Hall sat vacant. A circle of empty officers’ homes surrounded an overgrown green.

Within the island’s historic district, which includes the synagogue and many of the old buildings, exteriors are preserved as landmarks but interiors are available for reuse. A high school will open in one building this fall.

The synagogue itself stands empty in the shadow of a huge former dormitory for enlisted men. Its yellow paint is peeling in places. Out back is an empty patch of spongy dirt where a playground once stood.

“At the present time, there are no specific plans or tenancies for this particular building or other vacant buildings in the historic district,” wrote a spokesperson for the Governors Island Preservation and Education Corporation, which administers most of the island on behalf of the city.

Beginning in 2012, green spaces in the historic district will begin to be refurbished. New lighting, bathrooms and pathways will be installed to make the area more accessible. Other portions of the island’s redevelopment plan are still being ironed out, but an artist’s renditions published by the city show rolling, tree-covered hills and crowded seaside boardwalks.

Today, the island’s congregation may have dispersed, but its members still feel a connection. This spring, Kloner will officiate at the wedding of Gabelman’s son, whose bar mitzvah he presided over on the island years ago.

A Lonely Synagogue on an Empty Island