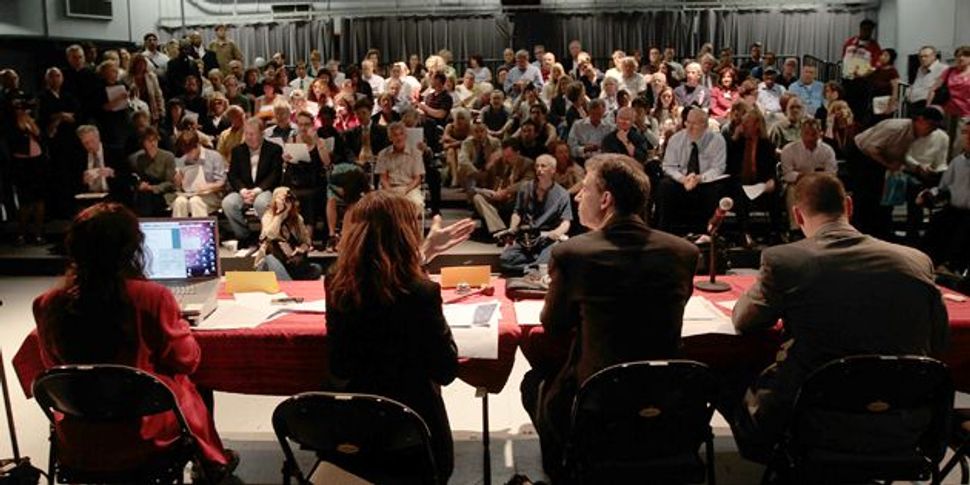 A Controversial Idea: Community Board 1 in Lower Manhattan had its monthly meeting on May 25, where the pro- posed Cordoba House was discussed and activists for both sides came to make their arguments. Image by GETTY IMAGES

A plan to build a Muslim community center and mosque near the site of the September 11 terrorist attacks in Lower Manhattan has drawn fierce opposition, despite the moderate reputation of the imam spearheading the effort. 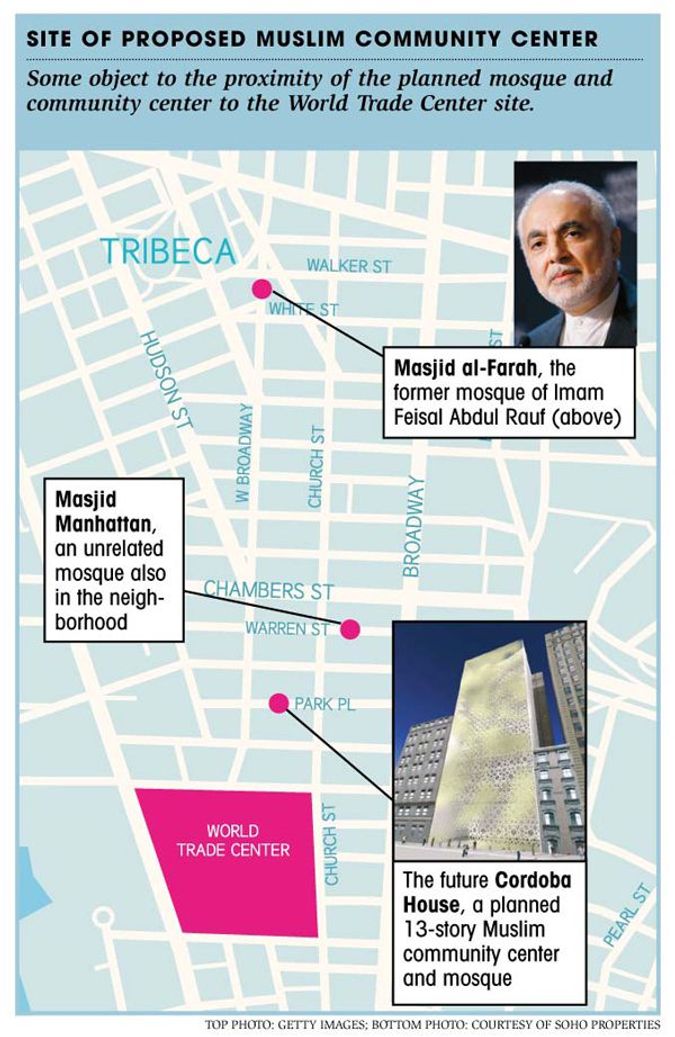 Community members voted to support the project, and Jewish leaders who have worked with Feisal Abdul Rauf speak highly of the imam’s commitment to interfaith dialogue. But some also advise respect for the objections to the center that have been raised by certain victims’ families, who view it as an affront to the memory of those who died nearly nine years ago.

“The families of the victims of 9/11 don’t have to make distinctions about who in the Muslim community they’re dealing with,” said Rabbi Michael Paley, scholar-in-residence at UJA-Federation of New York. “And so I’m openhearted. At the same time, I can’t think of anybody that’s been more present for interfaith dialogue, and particularly the needs of the Jewish community, than Feisal Abdul Rauf and Daisy Khan.” Khan is Rauf’s wife, and the executive director of the American Society for Muslim Advancement, one of the groups spearheading the project.

The 13-story community center is slated to be built at 43–45 Park Place, a former outlet store once occupied by Syms and by Burlington Coat Factory. The building is two blocks from what was once the site of the World Trade Center, now a busy construction pit known as Ground Zero. A piece of one of the airplanes that destroyed the World Trade Center fell through the building’s roof on the morning of September 11, 2001.

The building, purchased for $4.85 million in 2009, is currently being used for Friday prayers. Those services regularly draw 400 worshippers, according to Rauf. But the imam estimates that an additional $100 million will need to be raised to knock down the current structure and replace it with a new building, money that Rauf says he has not yet begun to collect. He hopes to begin construction within three years.

The plan has drawn support from community members, rabbis, local public officials and some

families of 9/11 victims. But the long-term time frame hasn’t cooled the passions of opponents of the project, who have included other victims’ families, conservative bloggers and a columnist for the New York Post.

In a press release, a group of families of September 11 victims, called 9/11 Families for a Safe & Strong America, stated that the group “rejects the plan for a mosque to be built atop a planned 15-story structure that would tower over the site where nearly 3,000 people were killed by Islamic terrorists.”

A representative for the group did not respond to a request for comment.

Another organization of families of September 11 victims made a public statement in support of the building. “To have a prayerful place in a site that was hell on earth, it makes absolute sense to me,” Donna Marsh O’Connor, a member of the steering committee of September 11th Families for Peaceful Tomorrows, told the Forward.

New York Post columnist Andrea Peyser has expressed staunch opposition to the project. One column ends with a simple request: “Move it away.”

That column reported that the “opening date” for the building is set for September 11, 2011, but Rauf said that no date has been set.

Among the activists opposing the community center and mosque is Pamela Geller, a conservative blogger. Geller sees the construction of the building as an attempt to claim Ground Zero for Muslims. “It is a symbol of Islamic conquest. A mega-mosque at Ground Zero would be a flag,” she told the Forward.

According to Rauf, the location was not chosen because of its proximity to Ground Zero. He said that he has worked in the vicinity for years, previously as imam of the Masjid al-Farah in Tribeca, which he joined in 1983.

“I have been a part of that neighborhood,” Rauf said. “My mosque and my community [were] impacted in 9/11; some of my congregation were victims of 9/11…. We see ourselves as part of the community.”

Rauf was born in Kuwait and educated at Columbia University. He heads the moderate Muslim group ASMA, and the Cordoba Initiative, an interfaith group. Both organizations are involved in building the community center and mosque, which will be called Cordoba House.

Rauf said that he sees Cordoba House as similar to the 92nd Street Y or to a Jewish community center. He said that the planned facility will offer the Muslim and non-Muslim communities lectures, sports, movies and cultural events.

“A non-Jewish friend of mine said, ‘You know, I have no reason to go to a synagogue, but I’ve gone to the 92nd Street Y many times. By going there, I’ve learned more about Judaism, had a better understanding and appreciation, than I had before that,’” Rauf said. “So that’s an example of what we hope our center will be.”

Jewish leaders involved in interfaith dialogue praised Rauf as an important partner. “He’s one of the most constructive forces of Islam in the U.S. today, and indeed internationally,” said Rabbi David Rosen, the American Jewish Committee’s Israel-based director of interreligious affairs, of Rauf. “I think he is a very fair man, and the kind of Muslim voice we need to empower and encourage.”

Some Jewish leaders have supported the building project explicitly, among them Rabbi Joy Levitt, executive director of the JCC in Manhattan. Rabbi Robert Kaplan, who heads the Jewish Community Relations Council of New York’s interfaith initiative, wrote a letter attesting to the good relationship between the JCRC and Rauf for consideration by Community Board 1, which voted 29-1 to support the proposed project on May 25.

But many Jewish interfaith experts who have worked with Rauf insist that the concerns of family members of the September 11 victims be taken into account.

“I can appreciate that some people, especially [those] related to the victims of 9/11, would feel uncomfortable,” said Yehezkel Landau, who teaches interfaith relations at Connecticut’s Hartford Seminary. “These are sensitive issues, all the more reason to dialogue about these things. People should withhold judgment, bring their feelings into an honest conversation.”

One person, who asked not to be identified because he is involved in interfaith affairs, said he was opposed on other grounds. “Even though Feisal doesn’t intend it to be an act of triumphalism, that is how it would be perceived in the Muslim world,” he said. “It’s psychologically disastrous.”

As the debate raged, other obstacles have arisen. The New York City Landmarks Preservation Commission has announced that it will hold a hearing this summer over whether the building currently in place at the proposed site of the center should be declared a landmark. If the commission decides in the affirmative, the building cannot be torn down, but the interior can be repurposed.