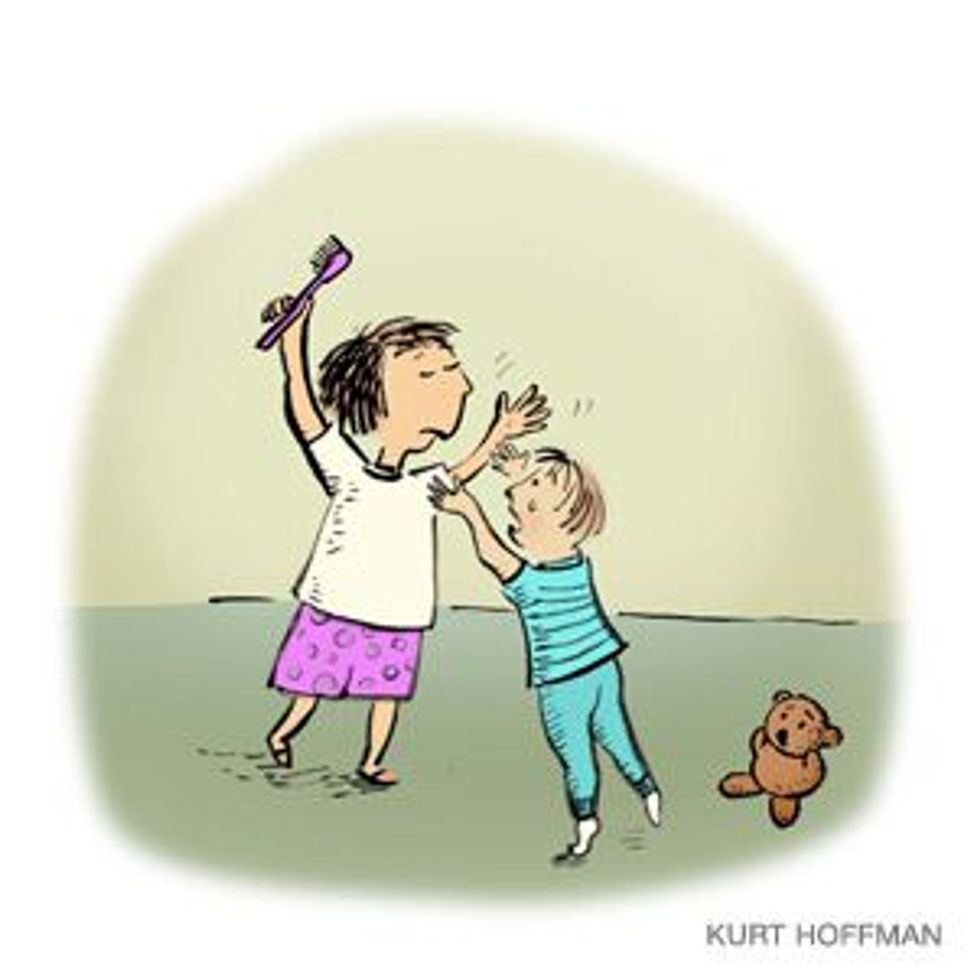 Adventures in sibling conflict, installment #3,121: Three months ago, at the Sacred Ritual Changing of the Toothbrushes, it was Josie’s turn to choose a brush. She chose the pink My Little Pony version with lavender bristles, leaving the purple one with blue bristles for Maxie, who wailed in thwarted fury. (If I could get the little cretins the exact same toothbrush, I would, but that way madness, gingivitis and grossness lie.) Now it was Maxie’s turn to choose first. She chose the pink Hello Kitty toothbrush with the dragon on the handle (no, I don’t get what the artist was going for either), which meant Josie got the purple cowboy-themed Hello Kitty with the lariat-adorned handle. Josie slitted her eyes in fury, but rather than screaming, she used her devious older sister wiles. The moment I left the room, she convinced Maxie to trade the coveted pink toothbrush for a chance to hold Josie’s closely guarded stuffed koala. The instant after she agreed, though, Maxie realized she’d been suckered. She sobbed and grabbed for the toothbrush, which Josie held above her head, taunting, “You traded! You traded! No backsies!” 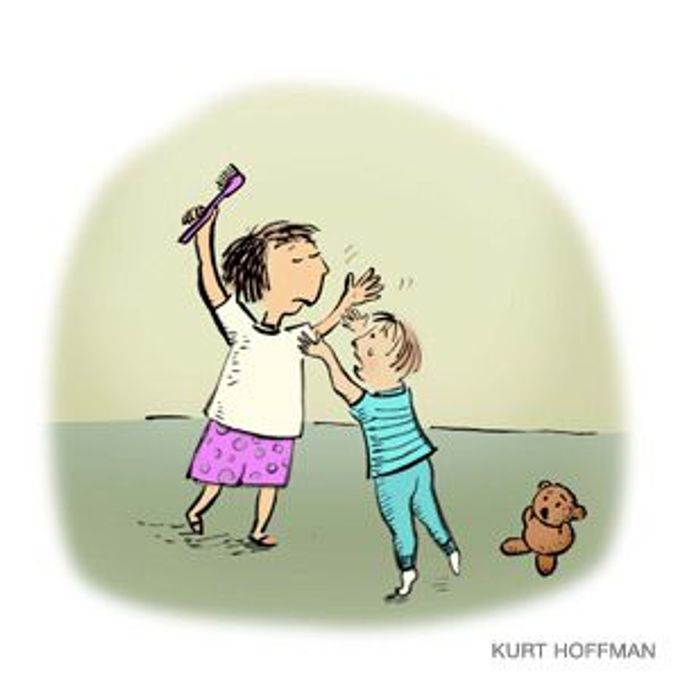 I came back to the room. “Josie, you know what this reminds me of?” I asked her. Josie shook her head. “You’re Jacob, Maxie is Esau, and the Hello Kitty toothbrush is her birthright!” Josie’s eyes widened. She stood still for a moment, then handed Maxine the coveted toothbrush.

Later, I told this story, laughing, to Josie’s religious school teacher. She looked stricken. “Oh no!” she said. “You should never have done that! You’ll hurt her self-esteem!” Later, I learned that the same teacher had skipped the story of Cain and Abel. She’d thought it would be far too upsetting for the children.

I respectfully disagree. Kids know those dark Torah emotions as well as they know the matted fur of a beloved stuffed koala. They forever struggle with, and caress and cuddle with, feelings of jealousy, fury, helplessness, even the desire to kill a sibling. There’s a reason the most resonant Bible tales come from Genesis: That’s where so many of the tangled, complex, aggressive family stories are written. Great literature, the Torah included, addresses scary themes. That’s why Grimm’s fairy tales have retained their popularity over the centuries.

That’s also why the “Wizard of Oz” movie is a classic, while the original Oz books disappoint. The books are sweet, pleasant and colorless. The movie, on the other hand, is deeply scary. The visceral whirling of the house in the tornado, the sickening thud as it lands on the Wicked Witch of the East, the horrifying sight of the witch’s feet in their striped stockings curling up like pillbugs under the house (an image that gave me nightmares for years), and most of all, the indelibly terrifying performance of Margaret Hamilton as the Wicked Witch of the West, all add up to primal movie-watching experience for the young.

In a perceptive essay for Salon.com, Laura Miller discusses why the nuanced, layered Narnia books are great literature and the sugary Oz books are not. Oz author Frank L. Baum, she says, was all about guarding children’s innocence.

“There should never be anything except sweetness and happiness in the Oz books,” the article quotes Baum, “never a hint of tragedy or horror. They were intended to reflect the world as it appears to the eye and imagination of a child.”

Except of course, that kids aren’t all sweetness and happiness, and neither are their imaginations. It’s our job as parents to accept that, and channel their vicious impulses, their yetzer hara. Yet because of our need to see them as innocents, and our own defensiveness when faced with their darkness, we often bobble the teachable moments.

Here’s an example: Josie has an intense relationship with two other girls in her 1st grade class. She loves them, she tells me; they’re “best friends”; yet someone often ends up crying. Josie’s teacher told me he wanted the three to have regular sessions with the school guidance counselor to talk about how to manage their thorny, often-painful friendship.

My first reaction was shame. My child needs special friendship help? My kid has incipient Mean-Girl tendencies? One of the other girls must be at fault! Yet when I took a few breaths, and let my humiliation and annoyance at the teacher settle a bit, I realized Josie and her friends would benefit from the coaching.

Like me, a lot of parents viscerally stiffen when confronted with their child’s even slightly unsavory behavior. The coach hates my kid! Boys will be boys! That teacher has it in for her! That parent overreacts and meddles! That girl is a bad influence! At least it’s not drugs! Everyone cheats! She was asking for it! That other kid’s a whiner and a tattletale!

And if our kid is the one on the receiving end of teasing or bullying, our first response is usually to lash out at others. Of course, no one deserves to be taunted. But might your child be displaying some tease-inducing behavior, and might you be able to help him modulate it? Is he, perhaps, socially inappropriate, impulsive, overly mouthy, arrogant, a crummy listener? Can you tamp down your own defensiveness enough to help him learn social rules while you also work on stopping the teasing?

I certainly don’t want to minimize the problem: The U.S. Department of Health and Human Services reports that 15 to 25% of American students are bullied with some frequency, and 15 to 20% acknowledge that they bully others. As many as 160,000 students may stay home on a given day because they’re afraid of being bullied. A surprisingly helpful government-run Web site, stopbullyingnow.hrsa.gov, offers a look at bullying research: what works and what doesn’t. Much of the info is relevant not only to schools, but also to parents coping with sibling rivalry and playground conflicts.

Perhaps counter-intuitively, zero-tolerance policies and threats of expulsion don’t work; they discourage kids from reporting teasing and bullying. Mediating, making a victimized kid face his tormenter one-on-one, can also be a bad idea, because it puts the two on equal footing when the bully is the one who needs the smackdown. (Figuratively.) Group therapy for bullies is worse than ineffective, because bullies build coalitions with each other to support and encourage more bad behavior (“deviancy training,” the experts colorfully call it).

So what’s the best way to deal with teasing and bullying? Create a climate that says it’s unacceptable. Schools and families should emphasize empathy, good citizenship, social responsibility, values of community. (All the talk about the power of the individual and the importance of good citizenship and standing up for what’s right reminds me of how my mom says we should teach kids about the Holocaust: Teach them about resistance to herd mentality and about individuals who protected the weak.) Schools should incorporate talk about community values throughout the curriculum, and parents should be sure they’re modeling good behavior at home and not resisting the teachable moments when they can compliment their kid on being inclusive (“You were so patient with that toddler!”) or note undesirable talk (“How do you think Ben felt when you gloated about your Mii clobbering his in Wii bowling?”).

And incidentally, let’s leave all the “oh, the poor child’s self-esteem!” talk out of it. A healthy sense of self won’t be destroyed by criticism of crappy behavior. As my friend Judith loves to say, serial killers have fabulous self-esteem.

Write to Marjorie at [email protected].