The Rise of the Wimpel 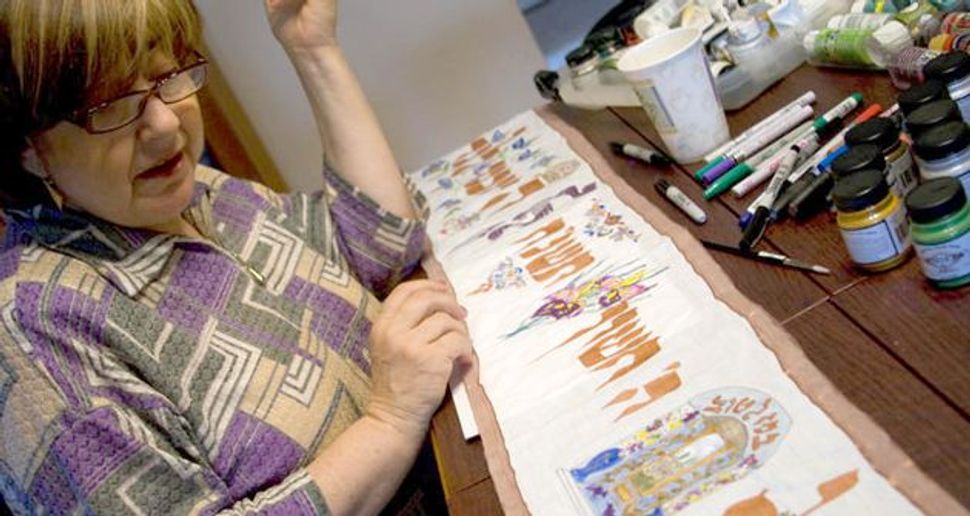 Tradition: Annette Kirschner puts the finishing touches on a wimpel. The design in the foreground was inspired by a stained-glass window at the Shaare Zedek Medical Center in Jerusalem. Image by RACHEL GEIZHALS

Jake Steirn’s bar mitzvah will take place in 2011, and his mother, Dawn, is thinking about the synagogue service, the trip to Israel and the wimpel.

The wimpel, a decorated ritual cloth that binds Torah scrolls, has long been a tradition with Yekkes, Jews of German descent. The Steirns are not Yekke, but they are fans of the beautiful custom, and they had a wimpel made for the bar mitzvah of their first son, Robbie, two years ago. Now Dawn wants one for Jake, too.

When Robbie used his wimpel at his bar mitzvah, no one in the Steirns’ Conservative synagogue in Weston, Fla., knew what it was or what to make of it. In fact, when Dawn first spoke with professional wimpel-maker Annette Kirschner, Kirschner was surprised to receive the request from a non-Yekke.

Dawn’s request to include swatches of family fabrics on the wimpel baffled Kirschner, who had a traditional design that she personalized for her Yekke customers.

In the end, Kirschner used her standard text and design across the wimpel’s length and cut the 30 “artifacts” — pieces of Robbie’s childhood teddy bear, a Florida Marlins baseball pennant and Dawn’s bridal gown — into medallion shapes, which she interspersed around the edges.

Dawn was thrilled with the wimpel’s religious significance and aesthetic appeal. Her rabbi, who was unfamiliar with wimpels, incorporated it into the Shabbat service, and local friends have since expressed interest in purchasing wimpels for their children’s bar and bat mitzvahs.

To some, the term Yekke is mildly derogatory, referring to German Jews’ legendary punctuality and attention to detail. Although there are several theories regarding the word’s origin, one of the most common is that it came from the different styles of dress worn by Western European Jews — with their shorter jackets, “yekke” — and Eastern European Jews, who donned the more traditional, longer coats.

Yekkes have used wimpels for centuries. They originated in Germany around the end of the 15th century. Historically they were made from the cloth used for a baby boy’s circumcision. Parents then decorated the 11-foot-long fabric with their son’s name, date of birth and other meaningful symbols, and donated it to their synagogue when the child was about 3. (Usually with the help of his father, the young child wrapped the wimpel around the Torah, symbolizing the boy’s binding to the Torah and Mitzvot.)

However, the custom has been spreading beyond its traditional base, to many non-Orthodox and non-Yekke synagogues, which commonly use velvet-covered elastic belts to wrap the Torah scrolls.

Kirschner, a Yekke herself, used to make wimpels almost exclusively for people with a Yekke connection. Now, non-Yekke orders make up 30% of her Washington Heights, N.Y.-based business, up from less than 10% five years ago.

“They say, ‘Oh, that’s a beautiful custom,’” said Kirschner, 67. “It’s very appealing because it’s something you do for your child, a child-based family heirloom.”

Kirschner, arguably the best-known professional wimpel-maker in the country, operates a business that is one of two of its kind in New York, possibly in America. She makes about 15 wimpels a year, charging $650 each.

Her Yekke clients are Orthodox, but her growing non-Yekke base comes from different walks of Jewish life. They hear of wimpels from friends, see them in synagogues or stumble across them on the Internet.

Non-Yekke and non-Jewish artists also make wimpels as commissioned works, and their clients are primarily non-Yekke. Fern Leslie of Pittsfield, Mass., said her $1,000 collage-like wimpels account for about 25% of her studio’s business. Leslie made her first wimpel 10 years ago for the bat mitzvah of a Rhode Island girl. For the next few years, she averaged one a year, but she now averages six. Leslie is fairly certain none of her customers are Orthodox or Conservative, but she doesn’t ask about denominations.

Artists in Pennsylvania, Oregon and California have painted, quilted and embroidered wimpels of silk, needlepoint and velvet for Conservative, Reform, egalitarian and pluralistic clients around the country. Sherri Wood of San Francisco recently made a few for a Durham, N.C., synagogue whose members wanted wimpels to represent their congregation. Elsa Wachs of Wallingford, Pa., made at least 10 commissioned wimpels, ran wimpel-making courses and discussed them during national workshops and shows. And Chana Zelig of Chicago made one wimpel for her daughter’s kindergarten graduation and another for a local family in honor of their daughter’s birth.

“Wimpels are taking on a whole new meaning, and all different people are making them for all different kinds of reasons,” said Judaic artist Shula Stevens of Sacramento, Calif. Wimpels are a relatively inexpensive contribution to synagogue art and a meaningful way to be close to the Torah, she said.

Stevens, like other artists, has noticed that more religious schools and synagogues are offering wimpel youth projects and adult classes.

A few months ago, the Philadelphia Museum of Jewish Art at Congregation Rodeph Shalom held an exhibit of 11 contemporary artists’ interpretations of the wimpel. Some explored Jewish rituals, honored progeny and drew inspiration from religious texts. Some were unique in presentation — one was framed, one was 3-D and one was drawn with Magic Markers.

Yekke wimpels are made for males and donated to the synagogue as congregational property, while non-Yekke wimpels are keepsake items that are usually stored or displayed at home. They record identities and celebrate rites of passage, including births, baby namings, bar and bat mitzvahs, confirmations and weddings. Many have eclectic, collage-like designs that reflect the subject’s personality, hobbies and family trivia. Some have text and some do not.

The wimpel’s popularity outside of the German community is surprising to Yekkes, who view it as a cherished communal custom, said Rabbi Benjamin S. Hamburger of Bnei Brak, Israel. Hamburger, a renowned expert on Yekke heritage, posited that perhaps people relate to the satisfaction of contributing to the Jewish community.

Dawn Steirn is thrilled that the wimpel is gaining popularity. It unites multiple generations of family members, she said, because they participate in a cloth that binds them, the celebrant and the Judaic faith.

That connection and continuity are what the wimpel is all about.

Rachel Geizhals is a freelance writer living in New York City. She has been published in The Jerusalem Post and other papers.

The Rise of the Wimpel