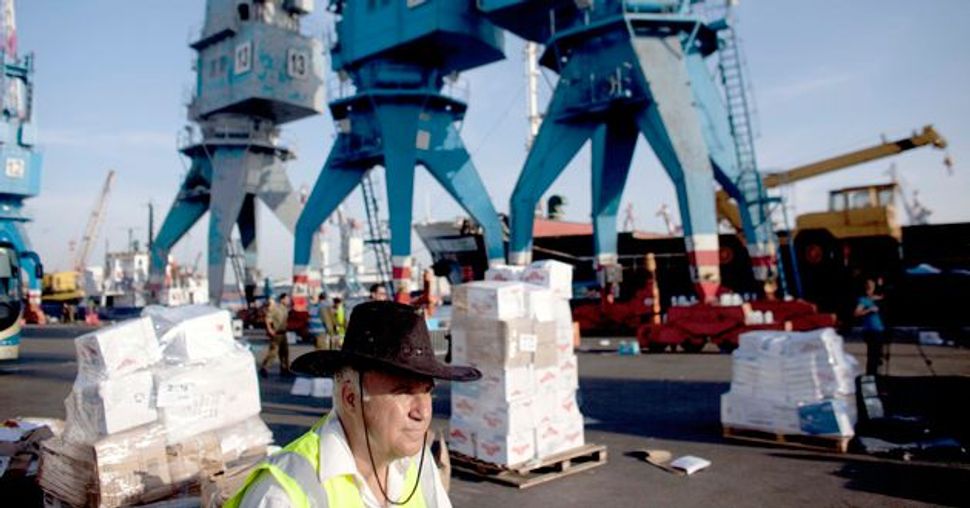 Confiscated: Tons of humanitarian goods that activists tried to deliver to Gaza are unloaded onto the docks in Ashdod. Image by Getty Images

Administration officials and Washington lawmakers indicated the United States is not willing to urge Israel to lift its blockade of Gaza, even as activists seek to highlight the issue after civilian deaths during Israel’s interception of a Gaza-bound flotilla.

As the dust settled and shock over the bloody results of the mid-sea encounter on May 31 led to charges and counter-charges, players fell back into their well-known positions: Members of Congress issued strong statements in support of Israel, and the Obama administration took a cautious approach, stressing the need to help Gaza residents but continuing to provide Israel with full backing.

Maen Areikat, who heads the diplomatic mission of the Palestine Liberation Organization in Washington, argued that now is the time for the United States to take action.

“They need to push for lifting of the siege and for alleviating the hardship of a million and half people in Gaza,” he said. Areikat rejected claims that opening the gates of Gaza could harm moderates in the Palestinian Authority, which he represents. Such claims, said Areikat, “should not be used as a pretext to avoid lifting of the siege.”

Israel imposed the sea and land blockade on Gaza after the Palestinian faction Hamas took over the region in a bloody June 2007 coup. The takeover by Hamas, viewed by Israel and the United States as a terrorist organization, led Egypt to close its land border with the Gaza Strip, completing the isolation.

Israel has since allowed an increasing amount of goods to go through the checkpoints it controls. But Israeli officials maintain that keeping Gaza under a tight blockade is necessary to stop the flow of rockets and weapons that have been routinely used in the past against neighboring Israeli towns. Officially, they deny the blockade is a punitive measure meant to pressure Gazans into driving out Hamas. But press reports and human rights groups say the blockade forbids many commercial items.

International aid groups say that the limited flow of goods has been causing severe hardship, poverty and health problems to Gaza residents.

The United States accepted Israel’s decision to impose the blockade, although it did call for humanitarian-driven efforts to ease the flow of goods through the Gaza checkpoints.

One of the few voices in Congress calling for a change in United States policy is Minnesota Democrat Keith Ellison. He took on the issue of Gaza after a 2008 visit to the region, not long after the end of Operation Cast Lead, Israel’s military campaign into Gaza to stop rocket attacks launched into Israel.

In a statement he issued following the flotilla incident, Ellison urged President Obama and the international community to lead an effort to end the blockade. “This event is the result of the ongoing, counterproductive blockade on Gaza,” he said. “The blockade punishes ordinary citizens, and strengthens Hamas’s control over commerce.”

But Ellison’s is a lone voice on this issue. Statements by Democratic and Republican lawmakers, who heard the news from Gaza during their Memorial Day recess, showed almost wall-to-wall support for the Israeli position and urged the continuation of the blockade.

“The naval blockade and the closure of access points into Israel from Gaza are entirely justified, legal and necessary to preserve Israeli lives and to minimize the smuggling of more and more powerful arms into Gaza to be used against Israeli civilians,” said New York Democrat Gary Ackerman, who chairs the House subcommittee on the Middle East and South Asia.

Ackerman added that if Hamas wanted to end the blockade, it need only accept the conditions set forth by the international community, which include recognizing Israel, rejecting violence and accepting previously signed agreements with Israel.

The Obama administration, like Congress, is resistant to pressure to join in the rising international chorus calling on Israel to end the blockade.

Secretary of State Hillary Clinton used harsh words on June 1 to describe the humanitarian situation in Gaza, calling it “unsustainable and unacceptable.” Speaking with reporters at the State Department, she urged Israel to allow Palestinians greater access to goods and building supplies, but she stopped short of calling for the blockade’s lifting.